Millions of furious Americans have fallen victim to the Equifax credit rating scandal after the company gave out false scores while the CEO – who is believed to be on a multi-million dollar salary – brushed it off and and the impact would be ‘small.’

Equifax, one of America’s top credit rating companies that reports on more than 200 million consumers, sent inaccurate scores that were off by 25 points or more for consumers looking to apply to auto loans, mortgages and credit cards.

Many people had their credit scores downgraded between March and April – meaning in many cases their loan applications were rejected and they were plagued with high interest rates.

But the company rebuffed the credit issue and said there was ‘no shift’ for the ‘vast majority of consumers’ during the three-week glitch.

Shalomim Halahawi, a rabbi from Georgia, attested to the glitch, saying he saw his credit score, which ranged between 811 and 820, suddenly dropped to 669 in a day. 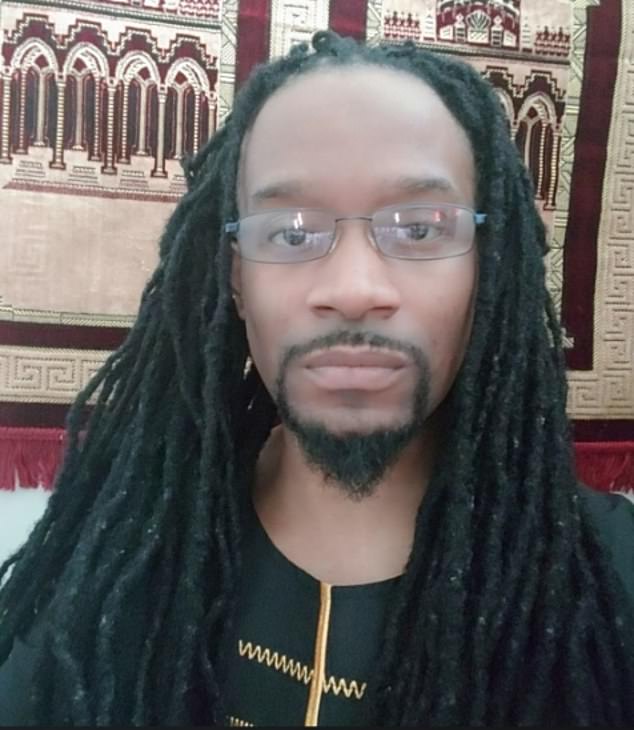 Shalomim Halahawi, a rabbi from Georgia, said his credit score dropped from 820 to 669 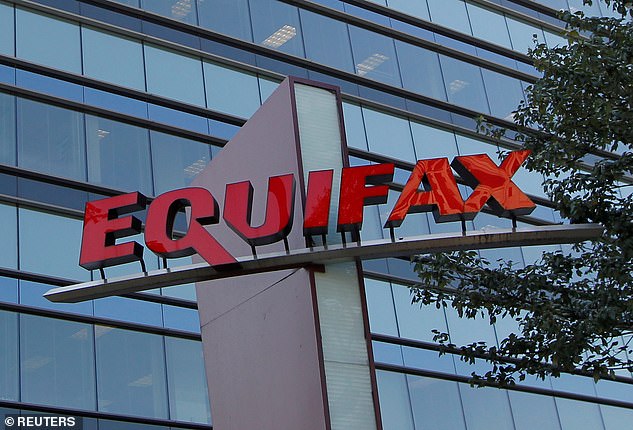 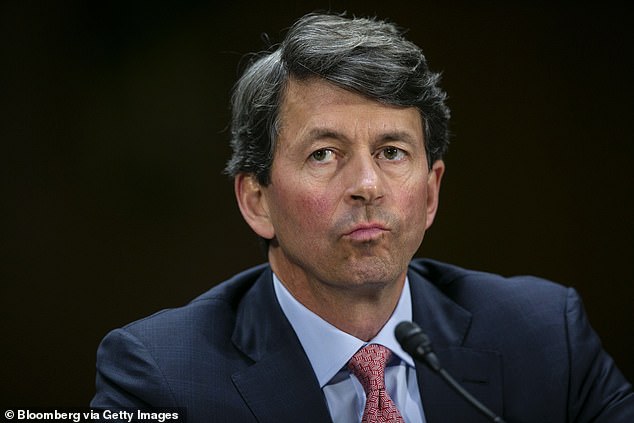 ‘I went ballistic and challenged it and suddenly 809 popped back up,’ Halahawi wrote on Facebook. ‘This is with 100% paid bills, mortgage payments, loans, credit cards etc, combined for over a decade. Never missed a payment, including during the pandemic.’

‘I don’t play about my credit score,’ he added.

One Twitter user, going by the name Emocane, said he also saw a sudden dip in his credit score during the affected period in late March as he was finalizing the purchase of his new home.

They said: ‘I closed on my house March 30th and on March 23rd, the lender re-ran my credit and magically it raised my rate. F*** you @Equifax, I’ll give you these hands in court you f***s.’

One woman, Amaya Magdala, said that she was set to close on a house in May – but after inspections already went through, her lender said her credit went from high 700s to zero.

Amaya said that the buying process was going smoothly right before her credit seemingly plummeted out of nowhere.

She wrote: ‘This happened to us. We were all set to close on our house in May and then, after inspections, appraisal, everything went smoothly and we were set to move in in a couple weeks, we heard from our lender that suddenly our credit went from high 700s to ZERO. The ‘credit’ system ought to be abolished.’

Samuel, another Twitter user who was affected by the glitch, wrote: ‘My TransUnion credit score is 706 while Equifax is 620. I actually submitted a credit dispute with them last week. 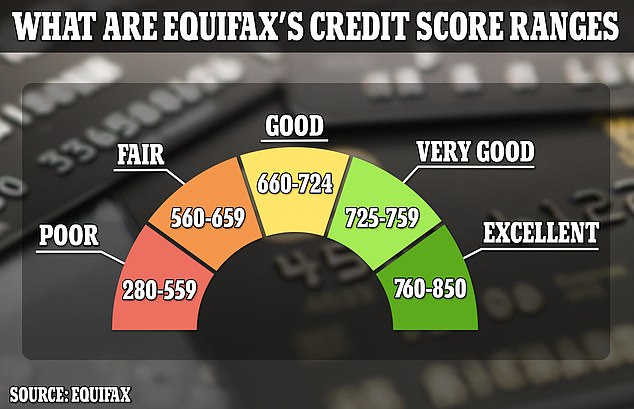 Bank executives and other sources claimed applicants for auto loans, mortgages and credit cards were affected by the error, which saw their scores fluctuate between credit ranges and may have caused them to miss out on the best interest rates available

‘This afternoon, this popped up on my phone. I knew something was egregiously off!!!

‘When I called last week, a law firm picked up. I kept asking the lady why a law office would pick up Equifax line, she won’t give me a straight answer.’

Bank executives and others familiar with the errors said that the inaccurate scores were enough to alter the interest rates available to consumers, while others were rejected from applying for the loans altogether, The Wall Street Journal reports.

Equifax said the issue, which was attributed to a ‘coding issue,’ has been fixed and that the glitch did not affect the vast majority of consumer’s credit reports.

‘We have determined that there was no shift in the vast majority of scores during the three-week timeframe of the issue,’ Sid Singh, president of Equifax’s U.S. Information Solutions, said in a statement.

Mr Singh, who has an estimated net worth of $18.5million, added: ‘For those consumers that did experience a score shift, initial analysis indicates that only a small number of them may have received a different credit decision.’

Mark Begor, Equifax’s chief executive who is estimated to earn $14million in his position, had acknowledged the glitch in June at an investors’ conference, claiming that the impact was ‘going to be quite small’ and ‘not something that’s meaningful to Equifax.’ 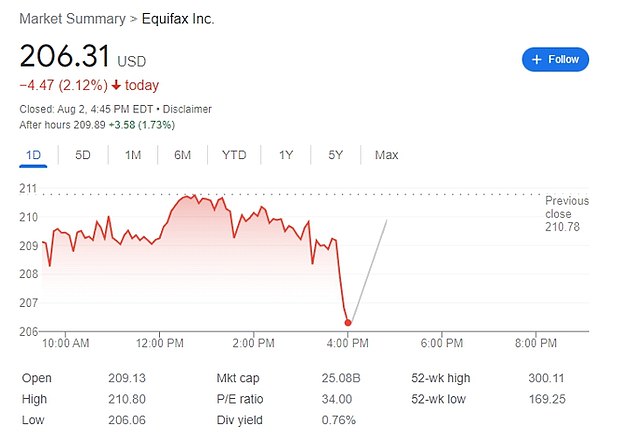 Equifax’s stock dropped by 2.2 percent on Tuesday, following reports of the credit error

Sources, however, told the WSJ that millions were impacted, with one banking official saying as many as 18 percent of applicants during the three-week glitch period had their credit scores affected by 8 points.

Another source told the outlet that one auto lender saw 10 percent of its applicants have inaccurate credit scores, with several thousands seeing their score affected by up to 25 points.

One source even claimed that a small number of loan applicants went from having no credit scores to a score in the 700s, and vice versa.

Even the smallest changes can have lasting effects on what interest rates and loans consumers can get. Typically, the higher the credit score, the more likely an applicant will get approved for a loan at a lower interest rate.

Equifax also breaks down consumers’ credit scores into five categories: poor, fair, good, very good and excellent, and a change of 25 points can make all the difference.

If a consumer with an excellent score of 775 saw their credit dip by 25 points, it would drop them to the very good category and cause them to miss out on the best interest rates.

Lenders are now scratching their heads on how to remedy the issue, with some considering providing consumers with new loans to get a better interest rate and allowing those who were rejected to reapply, the WSJ reported.

‘We do not take this issue lightly,’ Singh said in a statement as he added that Equifax was working on a solution with lenders and providing updated credit information.

Immediately following the news of the blunder, Equifax saw its stock drop by 2.12 percent on Tuesday, closing on its first low since the stock saw a large rise last week.

This is not the first time Equifax has got into trouble. Back in 2017, the credit rating giant fell victim to a hack that exposed the personal information of nearly 150 million American consumers.

The breach led to the ouster of former CEO Richard Smith after regulators found the company failed to take basic steps to protect consumers’ data, with Equifax forced to pay $700 million in fines.

The agency is currently investigating how the three companies handle consumer disputes after the companies agreed to strip tens of billions of dollars in medical debt from consumer’s credit reports.

One man, 38, is shot dead and another, 24 is wounded in their car in East Harlem

How rife is Covid in YOUR area? England’s wave continues to collapse despite NO restrictions