This is the moment a brave husky defended its owner’s home after a cougar trespassed on the property in Canada.

The footage, shot on December 21, shows the husky, named Miika, lunging at the cougar outside the home in Saanich, Vancouver Island, British Columbia.

Saanich police shared the video on their Twitter account to warn householders about the danger posed by the wild cats. 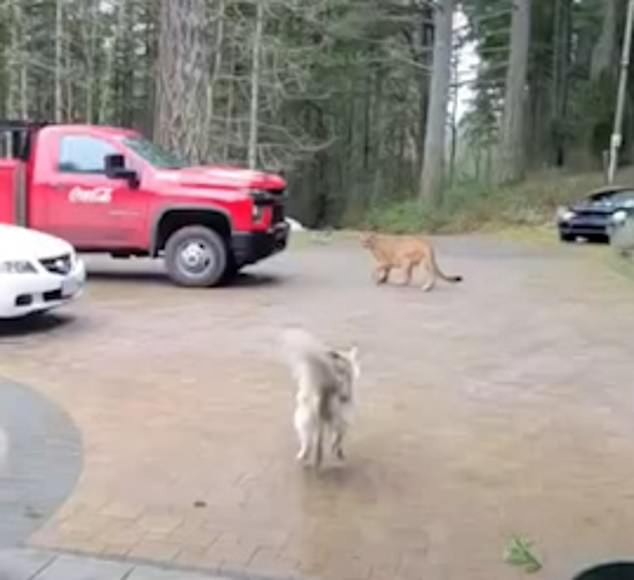 Miika the husky charged towards a wild cougar three times her size after it approached it’s owner’s home in Saanich, Vancouver Island, British Columbia on December 21 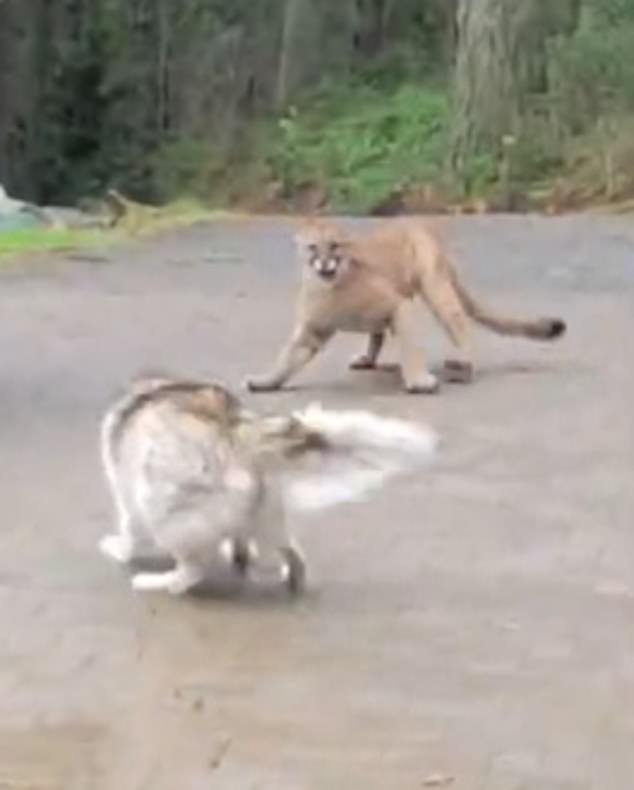 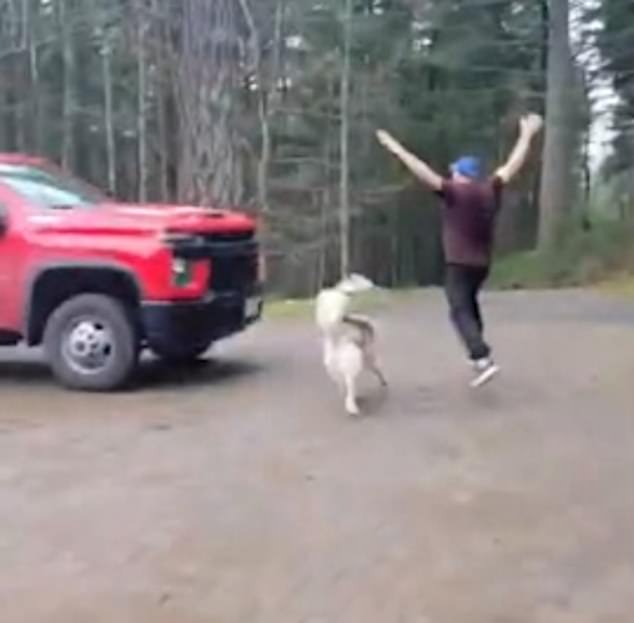 Mr Lucoe’s father raced out of the house and screamed at the cougar forcing it to retreat from the property. Mr Lucoe said his father sounded like Scooby Do

Miika’s owner Jarrod Lucoe called out to his dog and ordered her to return in case she was attacked by the cat.

The well-trained husky stops immediately and runs back to the house.

Mr Lucoe told Global News that he had come home for lunch when the incident happened: ‘At this time, my sister looks outside and notices Miika hiding behind one of the cars. We’ve had some dogs come from trails around here, come on to the property and sniff around. She’s pretty good at guarding the house and standing up for herself.’

Mr Lucoe said he was afraid for his dog’s safety as she approached the cougar, describing the situation as ‘surreal’.

He said it was the first time he had seen a cougar in the area. The vicious predator was about three times the size of the husky and represented a major threat to the family’s pet.

He added: ‘She had to lie down, she was really shaken up about it.’

Mr Lucoe’s father also charged towards the cougar to scare it from their property.

Mr Lucoe’s mother, Belinda, said her family were all inside the house when they saw their pet acting strangely.

Mr Lucoe told ChekNews: ‘I was honestly extremely scared for her and my dad’s fight or flight action just took effect. I’ve never heard him scream like that in my life, he kind of sounds like Scooby-Doo.’

Mrs Lucoe added: ‘I think she reacted then all of a sudden as she got closer we were all screaming and she probably sensed our fear and then probably had some fear as well is what I’m thinking.’

Local conservation officer Peter Pauwels said the Lucoe family had done everything correctly to scare off the cougar from their property.

He said encounters between cougars and humans are increasingly common though they are rarely caught on camera.

Saanich Police added: ‘We share the environment with large animals such as cougars and bears so residents must take into consideration that encounters with these animals are very likely.’

Kristin Smart murder suspect was accused of sexually assaulting others