Britons set to enjoy 25C at the weekend thanks to an African plume sweeping across UK before thunderstorms hit over weekend, forecasters say.

The Met Office said parts of England could see weather in its mid-20Cs but has also warned that the end of the wet weather seen during the week is not over.

Forecasters put the sunnier weekend down to a hot weather plume from North Africa which is sweeping hot and dry air across Britain.

But with this balmy weather also brings the danger of thunderstorms – which rely on moisture and warm – as it causes heat to build up.

The national weather service has also said there are high pollen counts today that will cause many to sneeze and sniffle as they enjoy the warm weather. 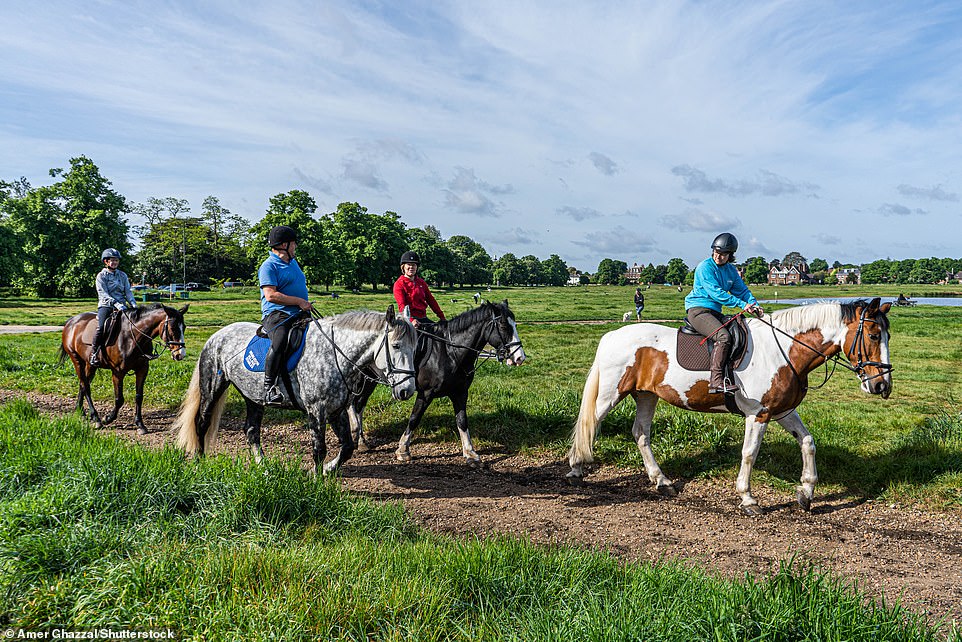 The Met Office said parts of England could see weather in its mid-20Cs but has also warned that the end of the wet weather seen during the week is not over. Pictured: Riders today in Wimbledon Common 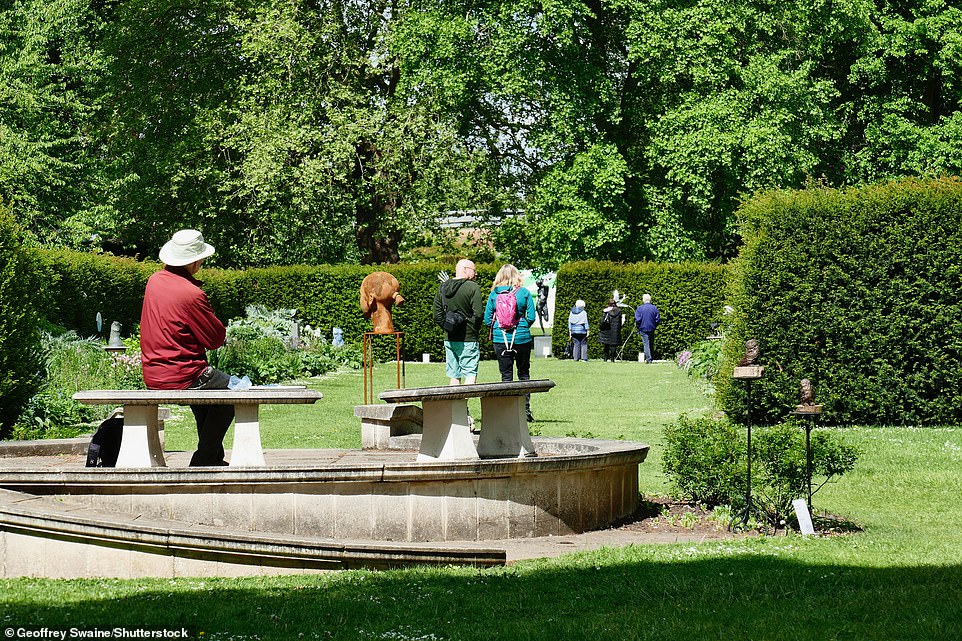 Britons set to enjoy 25C at the weekend thanks to an African plume sweeping across UK before thunderstorms hit over weekend, forecasters say. Pictured: People enjoy the sculptures, sunshine and picturesque surrounds at The Odney Club in Cookham, Berkshire 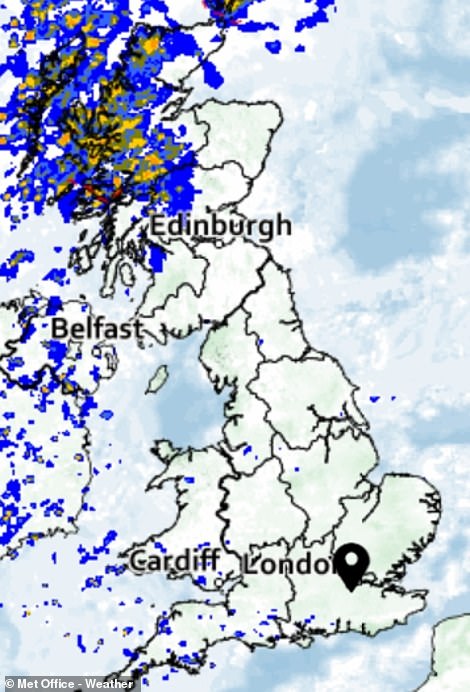 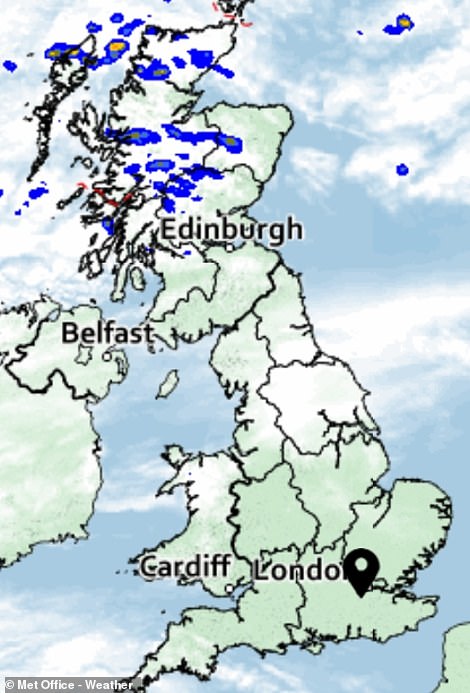 The weather at 1pm today was quite rainy still in the north, the Met Office said but by the afternoon this will begin to ease with only scattered showers

But things could get even worse for those Britons who have the condition as grass pollen – which affects 95 per cent of sufferers – reaches its peak.

Up to 20million people are expected to be affected this summer by the more than 150 species of grass in the UK.

Pollen levels will be very high in central England today, high in other parts of England and moderate to low in Northern Ireland and Scotland.

Up to 30 per cent of adults and around 40 per cent of children suffer from hay fever, according to Allergy UK.

Those who suffer with the condition are advised to avoid alcohol, wear sunglasses outside, close windows, change clothing regularly and shower to remove pollen from hair and skin.

The Met Office told the MailOnline: ‘A low pressure system will glance the far north of Scotland on Friday, bringing with it some wind gusts of up to 35 knots on some exposed coasts in the far north.

‘Associated with that will be some more persistent rain, especially for western Scotland, although showers will be possible more widely in the north; possibly reaching northern England and Wales for a time on Friday.

‘The set up from Saturday is for some largely more settled weather, and potentially the warmest day of the year so far. Saturday will see some patchy cloud around, but temperatures could peak at 24C, topping the 23.6C seen earlier in May.

‘The best of the sunshine and highest temperatures are likely to be in the southeast, although much of the UK will have a mild day, with temperatures widely in the low 20s and high teens.

‘Some early scattered showers will linger in some of the high ground in Scotland.

Overnight into Sunday, there’s a chance of some thundery downpours reaching the south of the UK overnight, although the precise positioning and extent is still being determined.

‘Currently, it looks as though 20mm of rain could be possible in a 3 hour period for some areas on the south coast of the UK.

‘This band of thundery rain will move northeast on Sunday morning, weakening as it does so.

‘Despite that early threat of some thundery rain, temperatures will still be fairly mild as warm air is drawn in from Europe.

‘Temperatures in the southeast could once again be around 24C, possibly 25C in a few isolated spots.

‘Although it’s a few days away, the current set up for Monday shows some unsettled weather for some western areas, although temperatures should remain mild.’

Today, there were decent spells of sunshine in the morning and there will be bright spells the rest of the day, the Met Office has said.

And some scattered light showers in the afternoon with a maximum temperature of 18C in London and the southeast. 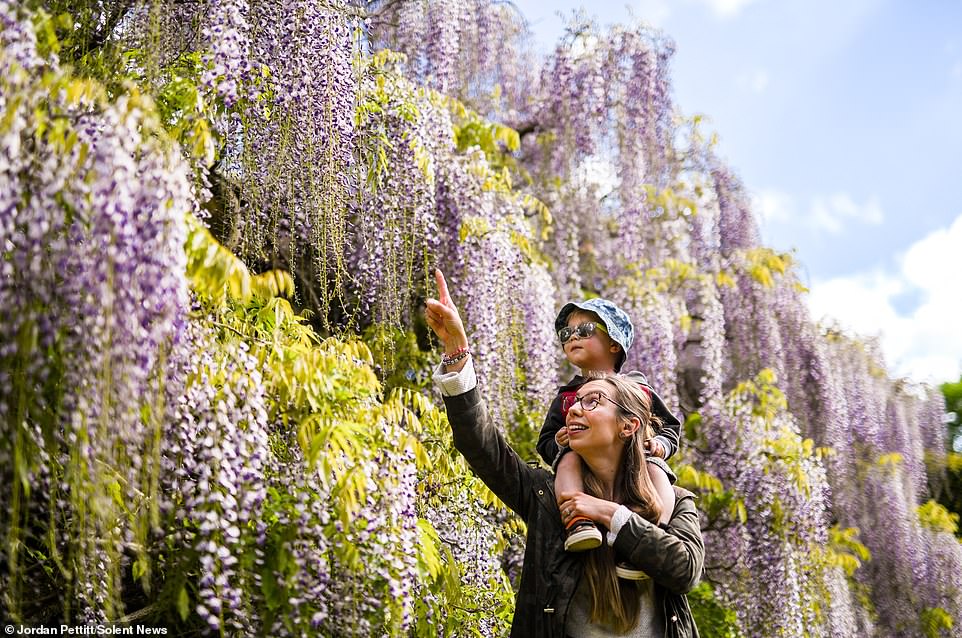 Today, there were decent spells of sunshine in the morning and there will be bright spells the rest of the day, the Met Office has said. Pictured: Jennifer Shulver with her son Edward, two, admire the spectacular display of wisteria today which has burst into bloom this week hanging over the pergola in the Sundial Garden at Exbury Gardens & Steam Railway

While Scotland and the north will reach highs of 16C and have a few evening showers particularly across the Peak District.

Friday will be a lot hotter and brighter as the weekend gets off to the right start. It will be a bright day with plenty of sunshine and maximum temperature of 23C.

It will also be a windy start to the day that will ease by the end while the outlook for Saturday is similar with a risk of some heavy showers into Sunday.

The national weather service explained for the UK that today: ‘Most areas dry with sunny spells and cloud bubbling up through the day, probably sunniest in the southeast.

‘Northern Ireland and much of Scotland breezy and cloudier with some showery rain at times.’

While Friday will be: ‘Dry and fine in south with hazy sunshine for most. Very warm in southeast. Cloudier in north with occasional rain across northern and western Scotland, though eastern areas staying dry.

‘Mainly fine and warm [at the weekend], locally very warm, with sunny spells. A few showers in the far north Saturday, then showers or rain, some heavy, in the south Sunday or Monday.’

BBC weatherman Tomasz Schafernaker said: ‘Thursday into Friday the high pressure starts to build in so this is where the warmer, sunnier weather is to the south of us.

‘We’ve got that more unsettled weather to the north again with hints of rain across parts of western Scotland. But whichever way you look at it, it is really starting to settle down by Friday with widespread sunny skies and temperatures of 20C in London.’

Another BBC meterteologist Nick Miller said: ‘It will be pleasantly warm [this weekend] especially when you get to see some sunshine, high pressure is close by but that is not the whole story.

‘Later Saturday, Saturday night, first thing Sunday there are some showers, some thunderstorms pushing up from the south and into parts of England and Wales, some of those come back Sunday night and into Monday morning.’ 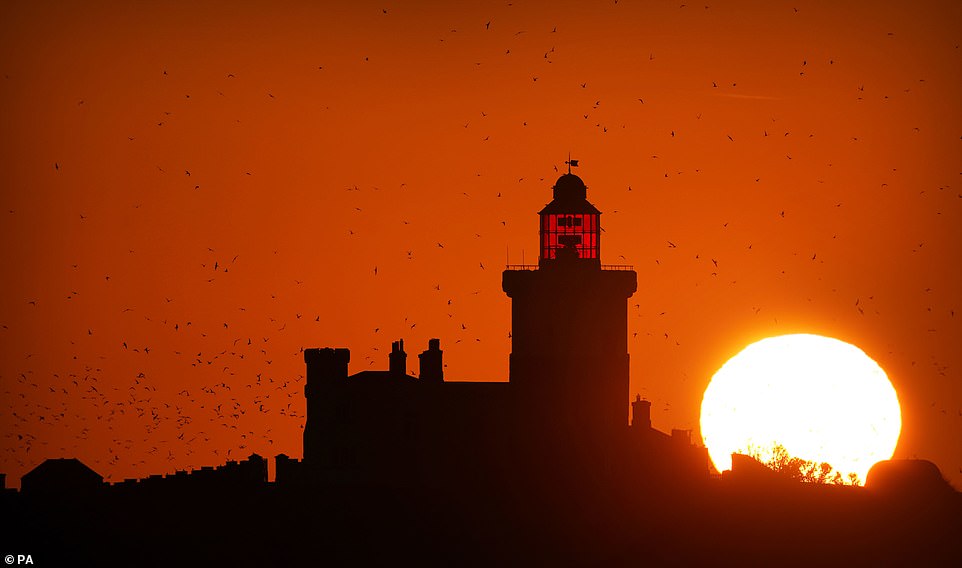 The sunrises over Coquet Island (pictured) today which sits 1.2 km off the Northumberland coast near Amble. The island at this time of year becomes home to over 35,000 sea birds including puffins and terns and home to a large amount of seals 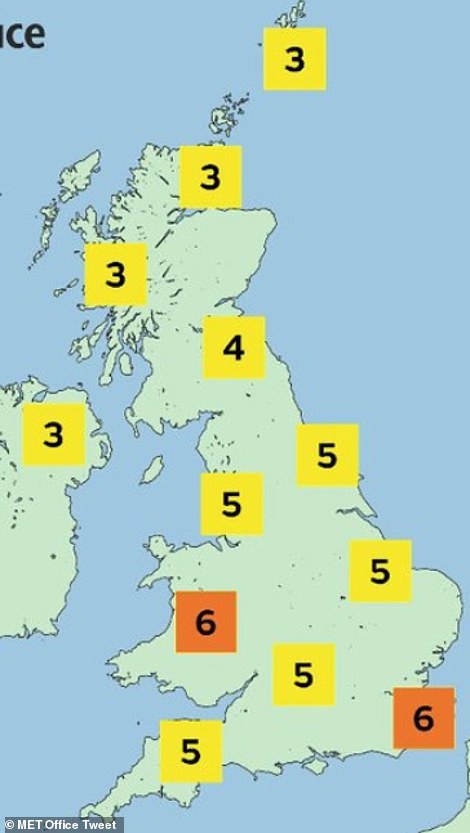 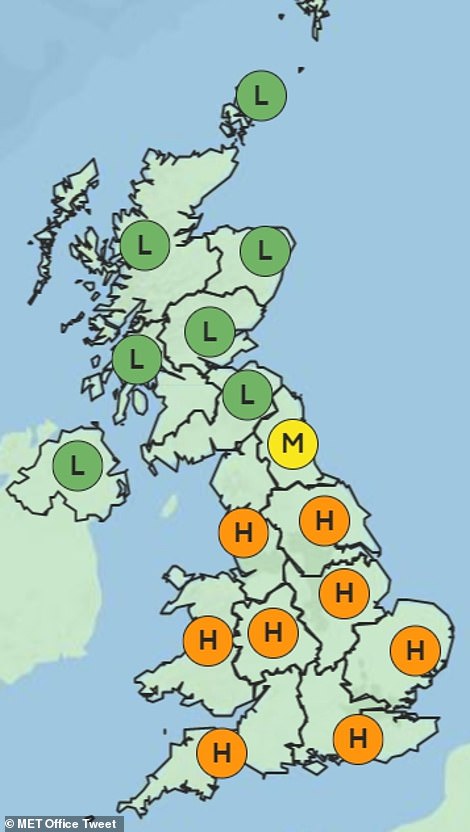 UV levels (left) will still be moderate or high for much of the country while there are high levels of tree pollen, Met Office said, especially for England and Wales and some grass pollen in the south (on right) 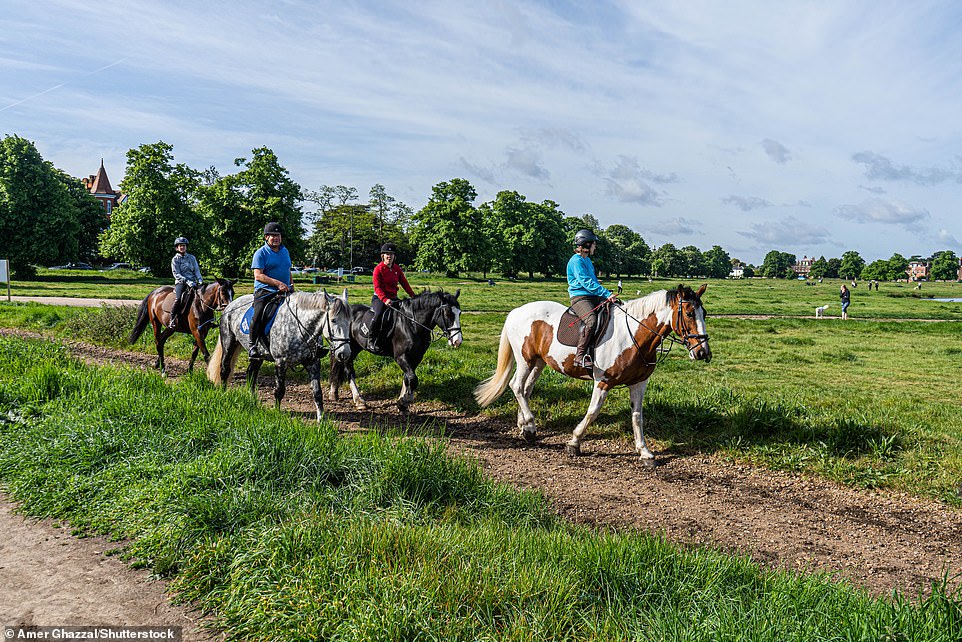 And there will be some scattered light showers in the afternoon with a maximum temperature of 18C in London and the southeast. Pictured: A group of horse riders on a bright morning today on Wimbledon Common as temperatures are forecast to rise over the coming days in London 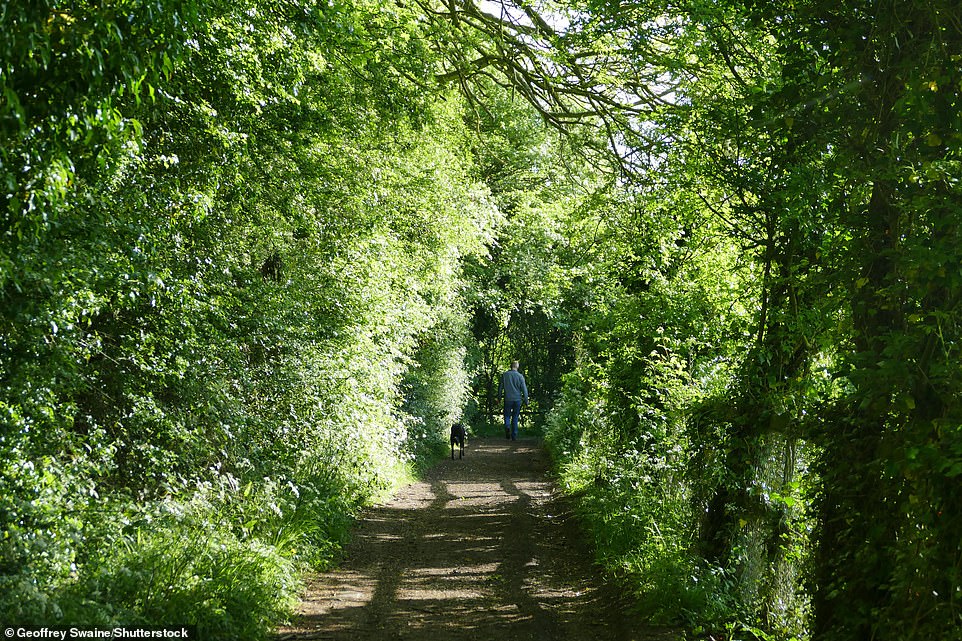 Friday will be a lot hotter and brighter as the weekend gets off to the right start. It will be a bright day with plenty of sunshine and maximum temperature of 23C. Pictured: People out in the woods in the early mornings sunshine in Clayfield Copse, Berkshire

There is also a warning of high pollen levels in the UK by the Met Office which could allergy sufferers to sneeze a lot more this week.

The forecaster explained: ‘Hay fever is the most common name for pollen allergy and is most commonly caused by grass pollens, although other pollens can also trigger the symptoms. The symptoms are caused when immune system reacts to pollen in the body to produce histamine and other chemicals.

‘Around two in every ten people have this allergy and it is thought that more than 10 million people in Britain suffer with hay fever.’

Dr Samantha Walker, director of research and policy at Asthma UK, said previously: ‘If you have asthma you should check pollen and air pollution forecasts in your local area, make sure you carry your reliever inhaler, and know what to do if your symptoms get worse.

‘If you also have hay fever it’s important to use a steroid nasal spray every day together with non-drowsy antihistamine tablets as needed.’

How have transfers from the Bundesliga to the Premier League fared after City's Haaland swoop?

A federal judge has rejected Elon Musk's bid to overturn a deal with regulators requiring him to get his tweets about Tesla pre-approved, meaning the billionaire still won't be able to tweet freely ev…
END_OF_DOCUMENT_TOKEN_TO_BE_REPLACED
Category Hot NewsPosted on 27.09.2021