‘What the f*** is that?’ Unidentified ‘enormous’ object is filmed flying straight up over London sky

Video footage recorded at around 4.27pm this afternoon appears to show a grey-coloured object flying directly upwards over Tooting.

A long stream of what appears to be smoke can be seen trailing behind the unidentified object as it travelled.

The bizarre sighting was made by 26-year-old freelance graphic designer Gabriella, who requested her full name not be published.

She claims to have been working on a project in her flat when she glanced out of the window and saw the unusual sight.

In the video clip, Gabriella can be heard saying: ‘What the f**k is that?’

Speaking about how her attention was caught, Gabriella told MailOnline: ‘It was the combination of the two, the yellow orange pastel colour – but then this really strange massive object, to the southwest of Tooting. 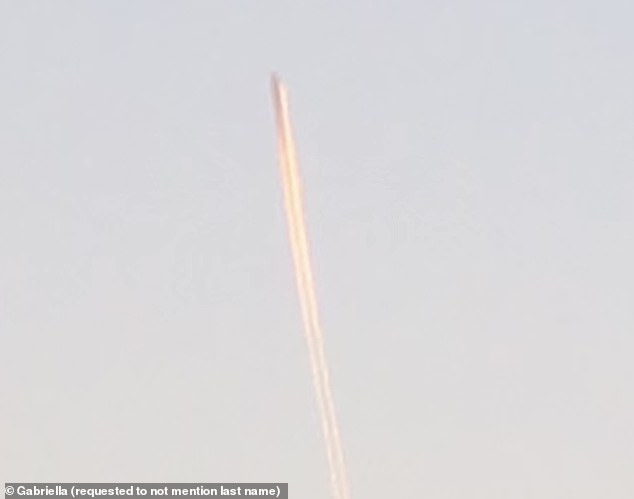 ‘I reckon the whole thing lasted for about two minutes, I filmed it for about 20 seconds, took a photo, then about a minute and a half later it had disappeared, so it must have been moving fast.

‘No one else had seen it, as far as I can tell… but I have the video and the photo as proof: I wasn’t imagining it. I’d love to know what it was. It was quite unsettling.’

The Ministry of Defence has been contacted for comment.

Grandmother, 58, who staged one-woman Extinction Rebellion stunt is let off by judge