GOP Rep. Madison Cawthorn has proven himself as a lawmaker who delights in disregarding the laws of the road.

Now video obtained by DailyMail.com shows Cawthorn, who lost the use of his legs in a 2014 auto accident, flouting all laws of safety as he speeds along in a powerful Mercedes C class that has not been modified for hand control driving.

The video was filmed in 2019 just months before he filed his candidacy for North Carolina’s 11th congressional district.

Today Cawthorn, 26, is facing a legal reckoning for his traffic violations with court dates looming for the most recent of his slew of offenses – ‘extreme speeding’ and driving on a revoked license. 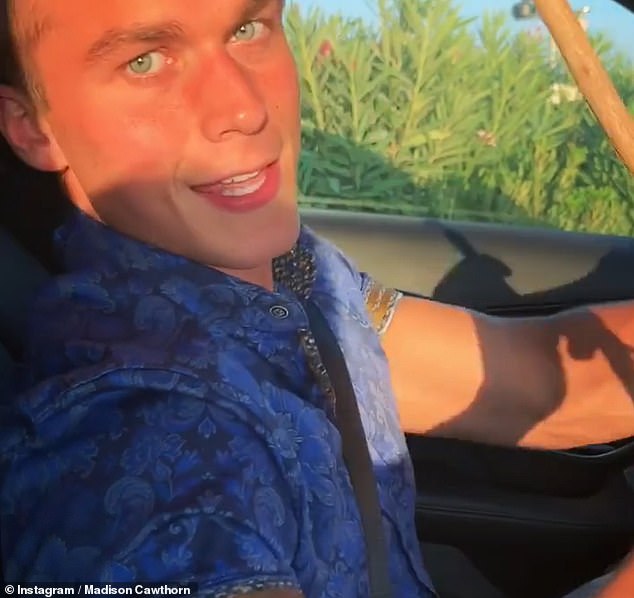 Video obtained by DailyMail.com shows Madison Cawthorn flouting safety laws as he speeds in a Mercedes C class that has not been modified for hand control driving 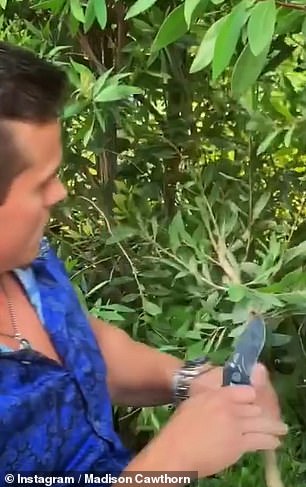 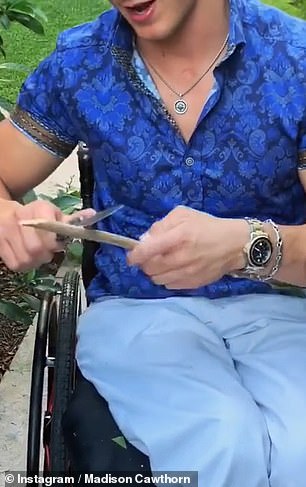 Cawthorn addresses the camera as he breaks a stick from a hedge and explains, ‘I’ve got my old trusty Zero Tolerance knife right here’ 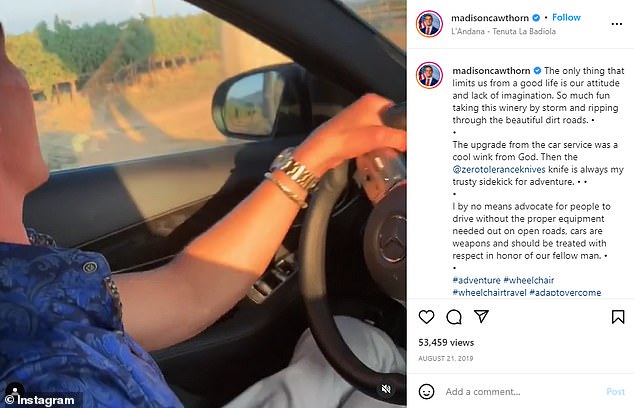 In the text accompanying the video Cawthorn states, ‘The only thing that limits us from a good life is our attitude and lack of imagination. So much fun taking this winery by storm and ripping through the beautiful dirt roads’

In the video, which he posted on his Instagram page three years ago, the smiling representative is seen excitedly demonstrating how he plans to rig the controls so that he can manipulate the pedals using a stick – torn from a hedge and whittled with his ‘trusty old Zero Tolerance knife.’

He immediately seems to lose partial control of the car as he drives off one-handed, bringing criticism to his actions.

Lindsey Granados, senior managing attorney at the law offices of Wiley Nickel – a Democrat who is running for Congress in a different district in North Carolina – called Cawthorn’s actions in the video reckless and dangerous.

‘Utilizing a stick, just a regular old stick, to operate gas and brake pedals is reckless and shows a complete disregard for the law and safety of others,’ Granados, who has represented thousands of people charged with driving offenses, told DailyMail.com.

‘I’ve been watching in the news his frequent encounters with law enforcement in North Carolina,’ Granados added.

‘Obviously in this instance, it appears he may be driving in Italy based on the title of the video and the vineyard in the background. I don’t know that anybody in the states can necessarily hold him accountable for this, legally speaking, due to a lack of jurisdiction.

‘But common sense would tell you this is not a good idea.’

Cawthorn’s spokesman joked about the video. ‘The rumors are true,’ he said. ‘Congressman Cawthorn can drive stick.’

Cawthorn has been in a wheelchair since 2014 when he was in the passenger seat of a vehicle that went off the road when his then best-friend driver Bradley Ledford, 26, fell asleep at the wheel.

The two were on spring break in Florida at the time. Cawthorn, who had been sitting with his feet on the dashboard suffered serious injury including a spinal fracture at his T11 vertebrae leading to partial paralysis.

Cawthorn gives the location for the newly emerged video as the five-star luxury resort of L’Andana in Tuscany, Italy, and is apparently expressing his disappointment over his rental car.

Passing a Mercedes C class in a parking lot he explains that he regrets that he did not request that model of car with hand controls.

He says, ‘It’s something I’ve always wanted to drive but I didn’t order with hand controls because we were supposed to kind of get more of a not-fun car.’

He continues ‘Because we don’t have any hand controls we’re just going to see if we can find a good old-fashioned stick.’

Smiling, Cawthorn addresses the camera as he breaks a stick from a hedge and explains, ‘I’ve got my old trusty Zero Tolerance knife right here.’

Cutting the stick he makes, ‘some little notches’ so he can have, ‘the perfect handle on it.’

Cawthorn is then seen accelerating off in the car after boasting, ‘Okay so we got launch control on, we got the stick, let’s see what we can do with this bad boy. Here we go.’

At one point he says, ‘It’s really difficult with one hand,’ and whoops as he ‘loses [control of] the back end’ of the car before grinning and saying, ‘This is so much fun’. 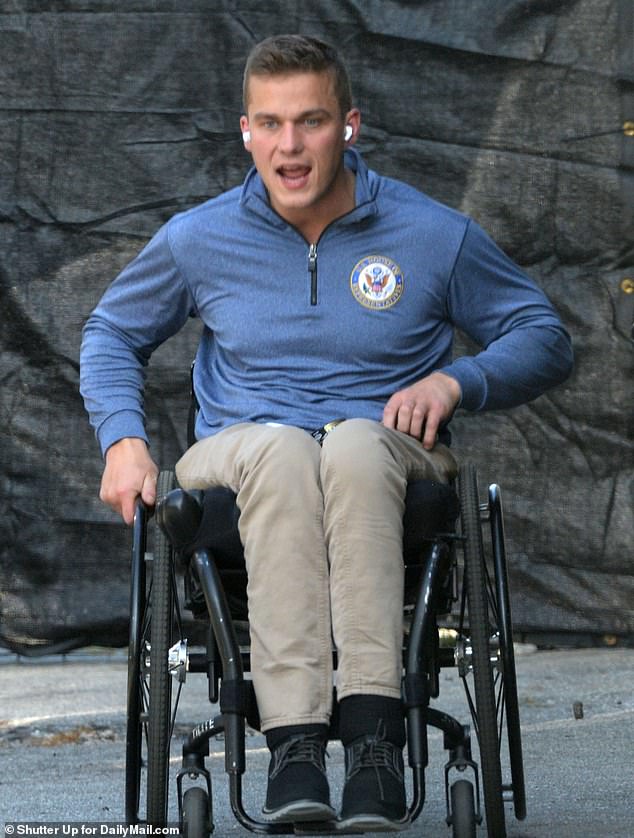 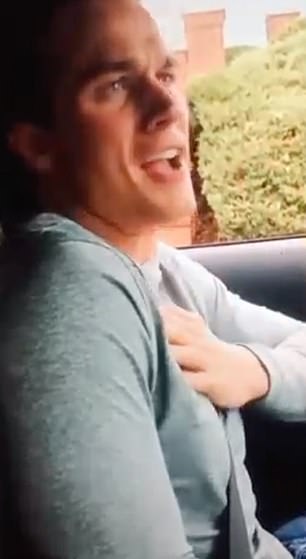 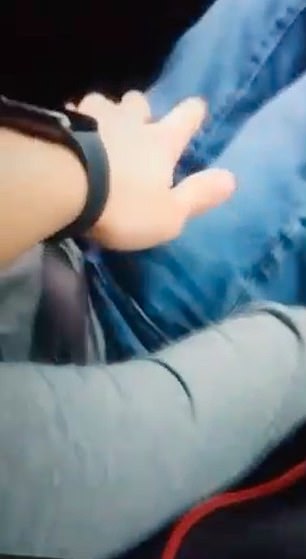 An earlier video first reported by DailyMail.com shows Cawthorn talking about wanting to ‘see a naked body beneath my hands’ before his staffer and second cousin Stephen Smith puts his hand on Cawthorn’s crotch 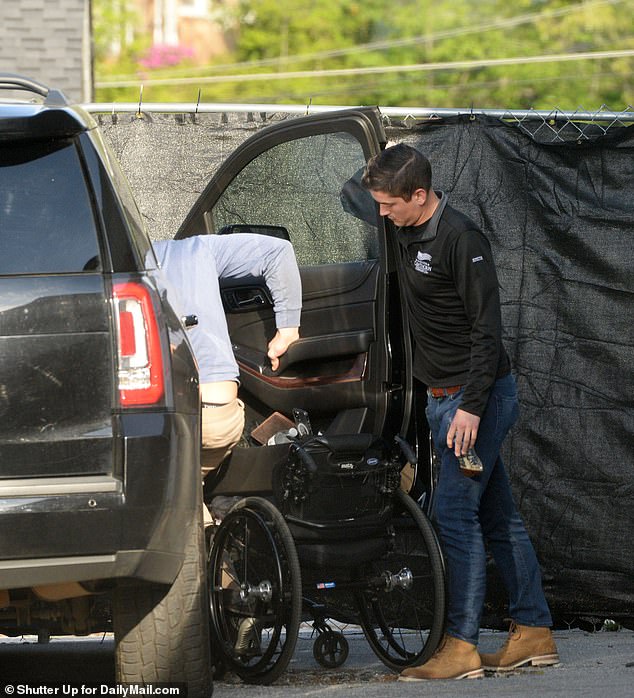 Cawthorn and second cousin Stephen Smith, who is also the congressman’s scheduler, were seen at their campaign headquarters in North Carolina last month

In the text accompanying the video Cawthorn states, ‘The only thing that limits us from a good life is our attitude and lack of imagination. So much fun taking this winery by storm and ripping through the beautiful dirt roads.’

‘The upgrade from the car service was a cool wink from God. Then the @zerotoleranceknives knife is always my trusty sidekick for adventure.’ 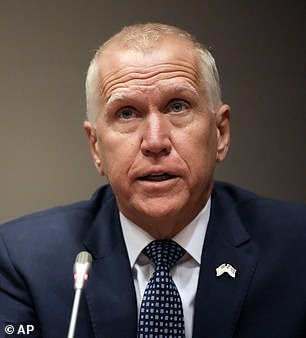 Sen. Thom Tillis called the recent leaks starring the congressman ‘absurd to embarrassing,’ adding that he will be ‘disappointed for his constituents’ if Cawthorn wins his primary

In a tone-deaf disclaimer, and in stark contrast to what he is so clearly practicing, Cawthorn then preaches, ‘I by no means advocate for people to drive without the proper equipment needed out on open roads, cars are weapons and should be treated with respect in honor of our fellow man.’

The post has emerged at the end of weeks of scandal and opprobrium which began with Cawthorn inadvertently attempting to take a loaded handgun on to a plane at Charlotte’s Douglas Airport.

Senator Tom Tillis has called for an investigation into allegations that Cawthorn may be guilty of insider trading after it was reported he was linked to ‘pump and dump’ meme cryptocurrency ‘Let’s Go Brandon.’

He had written on a December 29 Instagram post of himself with LGB leader James Koutoulas, ‘LGB legends…Tomorrow we go to the moon!’

The following day NASCAR driver Brandon Brown announced that the cryptocurrency would be his primary sponsor for the 2022 season and its value spiked by 75 percent.

Revelations in recent weeks include leaked photos that show Cawthorn at a party and possibly intoxicated while wearing women’s lingerie and a recorded phone-call with a former staffer released by political group PAC American Muckrakers aka Fire Madison Cawthorn.

The fired caseworker has filed a complaint against Cawthorn claiming she was not permitted by his office to take leave after her husband had a heart attack and that the congressman closed all but one of his North Carolina voter outreach locations.

An earlier video first reported by DailyMail.com shows Cawthorn talking about wanting to ‘see a naked body beneath my hands’ before his staffer and second cousin Stephen Smith puts his hand on Cawthorn’s crotch.

Another video was released showing Cawthorn, naked, screaming and chanting as he started thrusting against an unknown man’s face. Someone else – presumably the person taking the video – could be heard laughing in the background and telling Cawthorn to ‘stick it in his face.’

Cawthorn hit back, saying the video was a joke.

‘A new hit against me just dropped,’ he tweeted last week, explaining: ‘Years ago, in this video, I was being crass with a friend, trying to be funny.’ 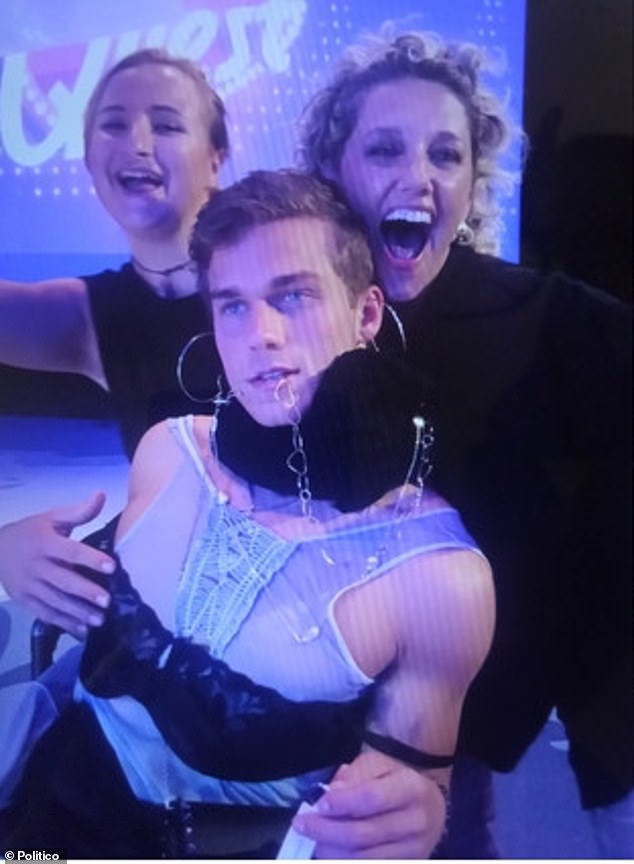 Cawthorn has become an increasingly embattled figure in recent weeks during which there has been that ‘deluge’ of scandal.’ Leaked pictures emerged in which he was seen, possibly intoxicated, wearing women’s lingerie at a party 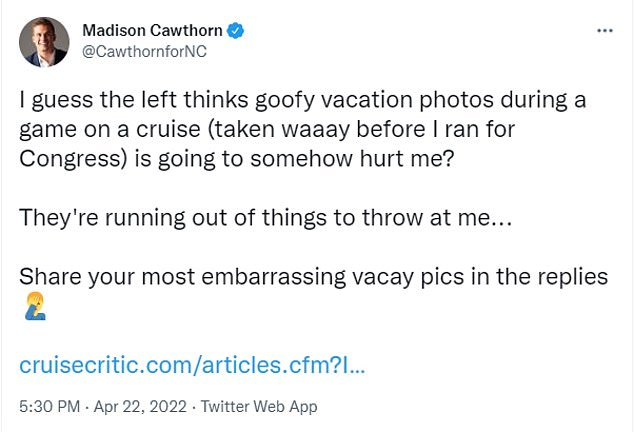 Cawthorn brushed off the photos on Twitter, and claimed it was all part of a cruise ship game and was another attack from the left 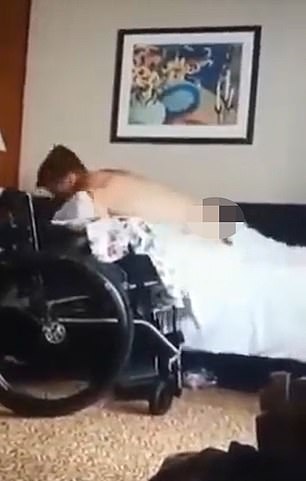 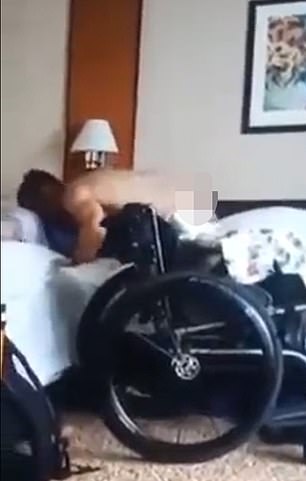 A video posted on social media shows Cawthorn naked and thrusting his pelvis at another man’s head. In the video, Cawthorn could be heard screaming and chanting as he started thrusting against an unknown man’s face 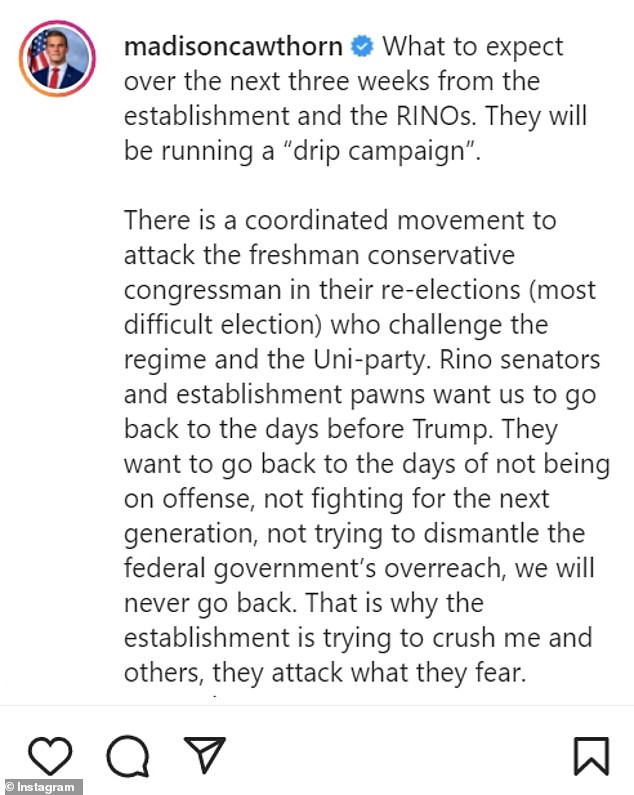 In the often-rambling post he accuses ‘one RINO senator,’ widely thought to be Tillis, of waging a war on his re-election bid. The North Carolina primaries are May 17

For his part Cawthorn has gone on the offensive posting a two-minute thirty-two second video on Instagram accusing the political establishment of paying hundreds of thousands of dollars to take him down.

In the often-rambling post he accuses ‘one RINO senator,’ widely thought to be Tillis, of waging a war on his re-election bid. The North Carolina primaries are May 17.

According to Tillis, ‘Madison Cawthorn has fallen well short of the most basic standards Western North Carolina expects from their representatives,’ citing Cawthorn’s ‘consistent pattern of juvenile behavior, outlandish statements and untruthfulness.’

Then on March 3, he was charged with a misdemeanor for driving his father’s car on a revoked license. He was originally stopped by North Carolina Highway Patrol for crossing the centerline.

These are just the latest in a history of reckless driving that spans a decade and encompasses more than a dozen citations in his home state of North Carolina and others.