Cristiano Ronaldo had just left his Majorcan holiday home for a day out with his family when one of his bodyguards crashed his £1.7million Bugatti Veyron, it was reported last night.

The 37-year-old dad-of five was in another vehicle in a small convoy with his loved ones when his employee came off the road and smashed into a stone wall.

Respected island newspaper Cronica Balear said the unnamed bodyguard got out of the car to continue his journey and left other staff employed by the Man United footballer at the scene to receive the police.

It was not immediately made clear where the Portuguese international could have been heading, but he has been pictured enjoying days out with his family on his £5.5million Azimut Grande superyacht which is moored in Port Adriano in the south-west of Majorca.

Cristiano is believed to be renting a luxury villa near the scene of Monday morning’s accident on a minor road near Joan March Hospital in the municipality of Bunyola.

The damaged Bugatti was later taken away on a tow-truck covered in a blue tarpaulin. 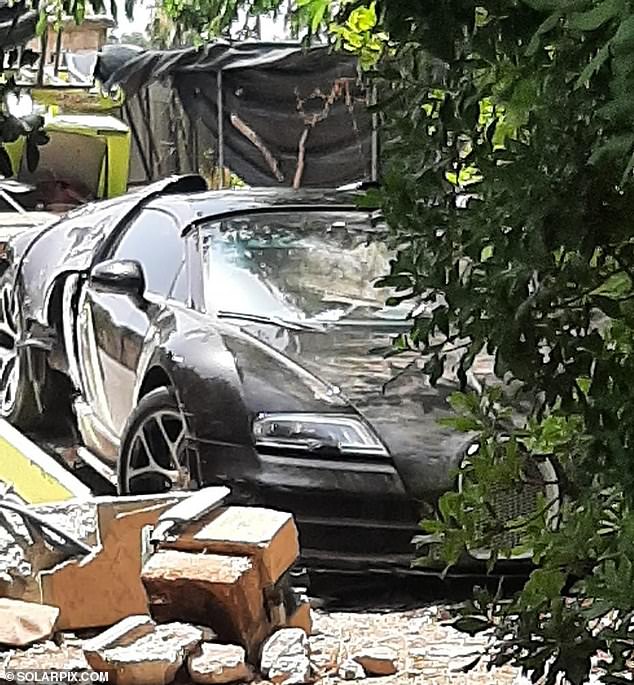 Cristiano Ronaldo’s £1.7million 900 horsepower Bugatti Veyron is said to have crashed in the east coast resort of Sa Coma 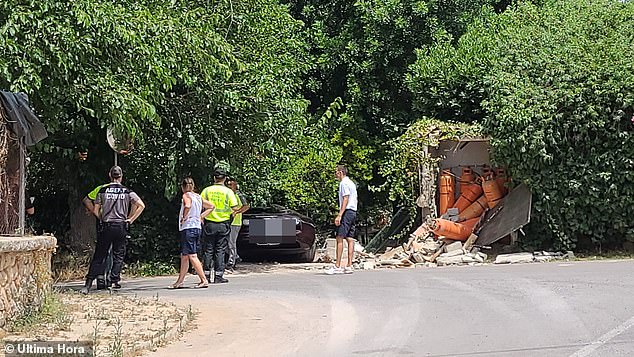 The Manchester United striker’s 900-horsepower Bugatti crashed into a wall, injuring no one

Cronica Balear said security employees left to look after the car while they waited for the police to arrive ‘had done everything possible to make sure curious locals who recognised the Bugatti as Cristiano’s tried to take photos.

The identity of the person at the wheel has not yet been revealed, but it is well-known Cristiano Ronaldo and his family are protected in Cheshire by Portuguese twins who served as soldiers with an elite special forces unit in Afghanistan.

The strongmen have been named as Sergio and Jorge Ramalheiro, who went on to become part of a Portuguese close protection unit tasked with watching over the likes of politicians and judges after serving in Afghanistan.

It is not known if the crash involved either Sergio or Jorge Ramalheiro.

Portuguese celeb magazine Flash said the twins, part of a set of triplets, had been hired by Cristiano after they asked to go on unpaid leave from the PSP police to pursue other interests. 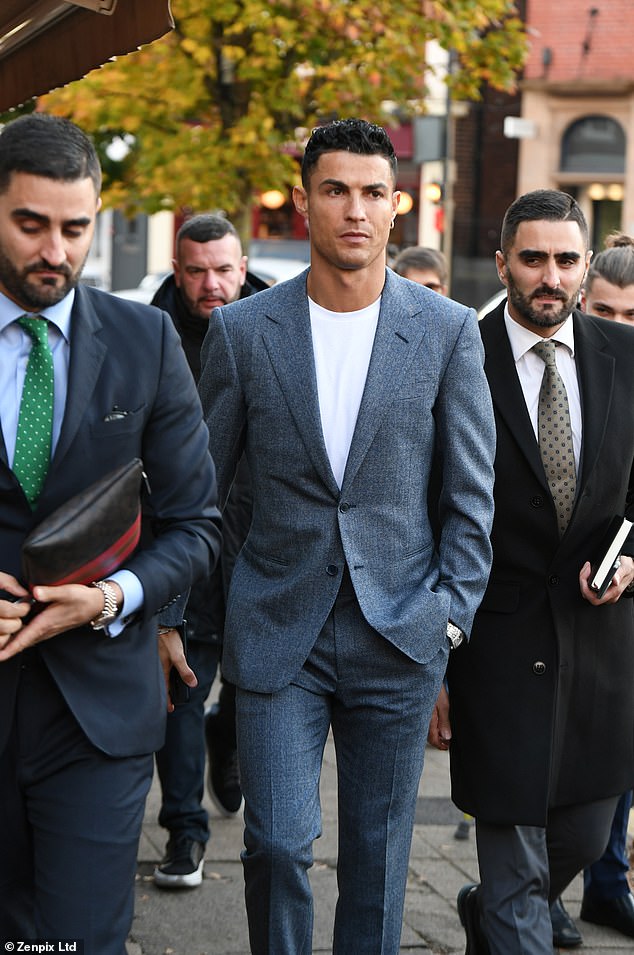 The identity of the person at the wheel has not yet been revealed, but it is well-known Cristiano Ronaldo and his family are protected in Cheshire by Portuguese twins, Sergio and Jorge Ramalheiro (pictured with Ronaldo), who served as soldiers with an elite special forces unit in Afghanistan. It is not known if the crash involved either Sergio or Jorge Ramalheiro

The third brother, named as Alexandre, is still understood to be working as a police officer.

Spanish police confirmed yesterday afternoon they had no information to suggest Cristiano had been in the car at the time.

One well-placed source said: ‘The car smashed into a wall but there was only material damage with no-one injured and the driver accepted full responsibility for what happened.

‘The information about who was behind the wheel and what occurred is registered on a police database and is there for a court or officers to access if any further investigations need to be conducted.

‘But it is more a case of the information needing to be registered so the owner of the property that was damaged can put in a compensation claim and use the police report as a back-up in case there is any dispute down the line about how the damage was done.’ 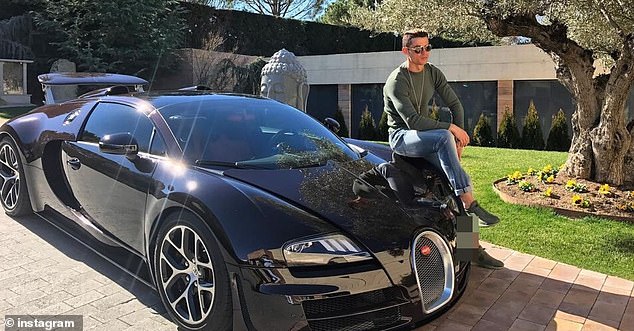 Ronaldo sitting on the bonnet of his then shiny and new Bugatti Veyron, which was crashed today 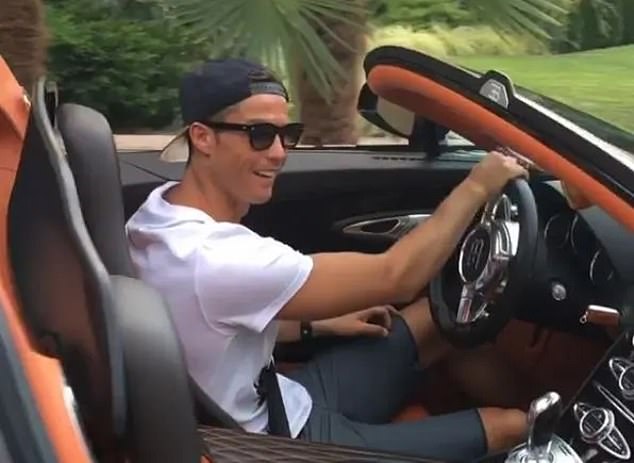 Ronaldo was pictured driving the £1.7million supercar on the Spanish island yesterday

Another insider added: ‘The accident happened on a minor road near Joan March Hospital.

‘The car appears to have come off the road and has hit a wall which forms part of the protection to a house with a gas canister deposit behind it.

‘An employee of Cristiano’s was apparently driving at the time and not Cristiano. He was definitely not at the scene when officers arrived.

Well-placed police sources described the car that was damaged as a Bugatti grand sport, tending to suggest it was Cristiano’s £1.7million Bugatti Veyron that was involved as local press reports indicated and not his limited edition £8.5million Bugatti Centodieci.

Initial reports after the 37-year-old dad-of-five jetted to Majorca last week said he had transported the Bugatti Centodieci to the island along with a Mercedes-Benz G-Class before it was subsequently reported the Bugatti was the cheaper Veyron.

The car’s whereabouts was not immediately clear yesterday afternoon.

The only emergency responders who attended are understood to have been police. Sources said neither firefighters or paramedics were mobilised.

The Portuguese football icon has a glittering car collection, with his Bugatti the centrepiece 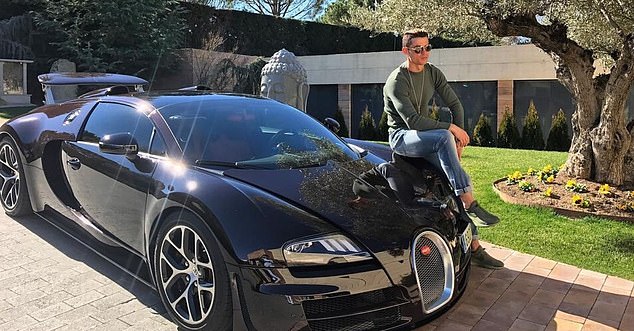 Cristiano jetted to Majorca with his five children and girlfriend Georgina Rodriguez on June 14.

They are renting a luxury home at the foot of the Tramuntana Mountains and enjoying days out on Cristiano’s super yacht.

It is the first time Cristiano and Georgina have holidayed with their daughter Esmeralda, whose twin brother died during childbirth in mid-April.

They are expected to stay at the house for another three or four days.

The villa where they are staying has its own gym, pool surrounded by palm trees, several jacuzzis, a beach volleyball court and a mini-football pitch. 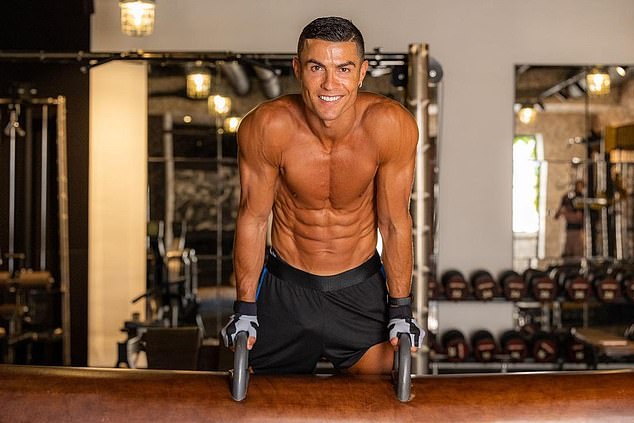 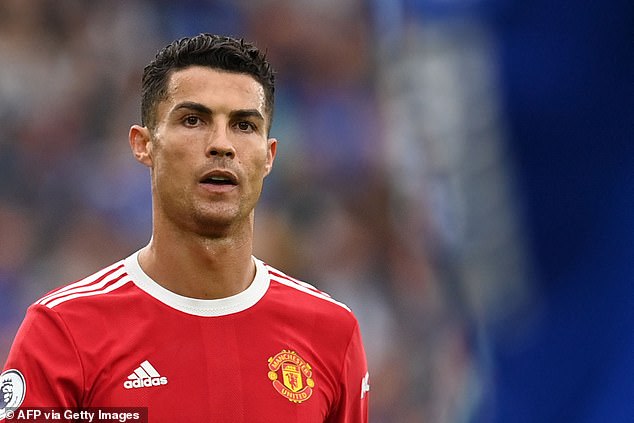 The footballer and his family picked Majorca for their summer holiday last year before the striker announced he was returning to Old Trafford.

They stayed at a £10,000-a-night historic seafront mansion on the island built to defend the coast from attacks by the British.

The property was identified as Manresa Castle – Castell de Manresa in Catalan Spanish – after Cristiano posted pictures of him relaxing with Georgina at the start of July last year.

The sensational seven-bed property where he stayed dates from 1715 and was built to ward off the British who at the time controlled the island of Menorca.

This new break is the couple’s first since they announced the tragic death of Esmeralda’s twin brother on April 18. 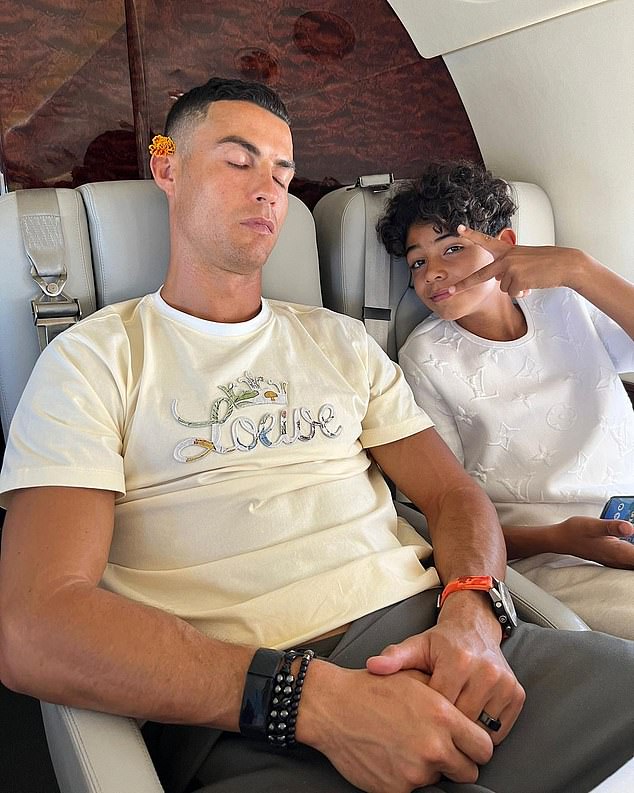 They had announced last October they were expecting twins and Argentinian-born Georgina revealed she was carrying a boy and girl in a touching video featuring their daughter Alana Martina, four, and Cristiano’s three children, five-years-old twins Eva and Mateo and Cristiano Jr who is 11.

Cristiano said in a heart-wrenching statement after the death of their child: ‘It is with our deepest sadness we have to announce that our baby boy has passed away. It is the greatest pain that any parents can feel.

‘Only the birth of our baby girl gives us the strength to live this moment with some hope and happiness.

‘We would like to thank the doctors and nurses for all their expert care and support.

‘We are all devastated at this loss and we kindly ask for privacy at this very difficult time.

‘Our baby boy, you are our angel. We will always love you.’

Elon Musk's transgender child, 18, files court docs to change name and distance themselves from him

Just 32 Britons have been hospitalised with coronavirus after being vaccinated

Sending police officers to all burglaries cuts the number of offences by half, forces find