Goldberg, 66, who is known for her stronghold opinions, didn’t hold back on her religious beliefs on Wednesday’s show, insinuating that God supports abortion because Americans have the right to choose.

‘God made us smart enough to know when it wasn’t going to work for us. That’s the beauty of giving us freedom of choice,’ Goldberg said.

Hasselbeck, 45, who has returned as the token Republican among the slew of liberal hosts, immediately disagreed, with a flat-out ‘No.’

Goldberg continued to talk, saying that her ‘relationship with God is always choppy’ which showed Hasselbeck holding back a laugh before informing the controversial co-host that she was God’s ‘favorite.’

‘I also know that God made me smart enough to know that if there are alternatives out there that can work for me, I will investigate them. But I also know God said do unto others as you would have them do unto you [and] I will not make that decision for anybody,’ she slammed.

Only moments earlier, Hasselbeck said she believed that women were only getting ‘half the information’ and that the US was failing to provide pregnant women with all the options available to them. 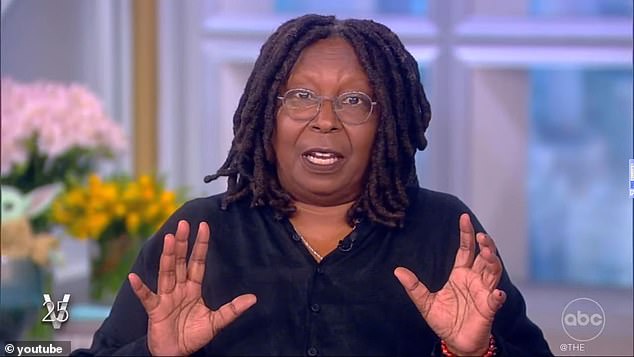 Whoopi Goldberg, 66, said God supports abortion during a heated debated on The View. ‘God made us smart enough to know when it wasn’t going to work for us. That’s the beauty of giving us freedom of choice,’ Goldberg said 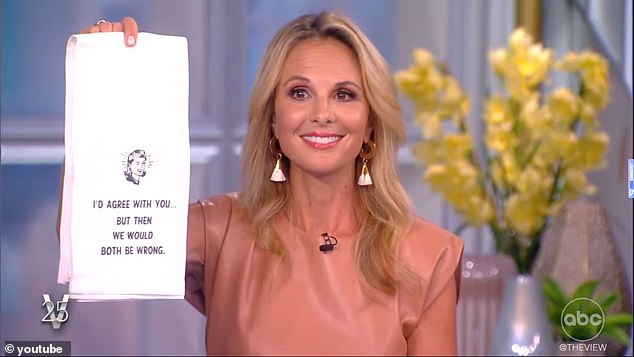 Elizabeth Hasselbeck, 45, who just recently returned to the show, proudly held up a towel that read ‘I’d agree with you, but then we would both be wrong’ as Goldberg continued to talk. The returning host repeated suggested to viewers to use ‘agencies’ to help ‘create a birth plan and match you with an adoptive family’ rather than choosing an abortion

She informed viewers she believes the best option is to ‘look for the non-profits’ that ‘help you create a birth plan and match you with an adoptive family’ rather than choosing an abortion.

‘That option’s real,’ she lamented. ‘I think that lives have a precious value on them.’

Goldberg agreed, stating that ‘God doesn’t make mistakes,’ but that choice is important.

Hasselbeck, who left the show three years ago, was finally given her moment to pull out a dish towel she had been hiding under the table, which stated: ‘I’d agree with you, but then we would both be wrong.’

The newly returned host seemed pleased with herself as she threw the decorative item onto the table.

‘I say this with love in my heart,’ Goldberg started. ‘I don’t ever think that I can make any decision for you and your family that you are not smart enough to make for yourself.’

Just as the commercial break was about to cut off Goldberg, she got her dig in.

‘Just before we go, no one at this table is not pro-life. I just  want to make sure we all know that,’ she smirked as she insinuated that pro-choice people were not anti-life.

‘Nobody is happy about going to get an abortion. That’s not pro-life, it’s not fun.’

As the music played in the background as producer tried to quiet the ladies into an advertisement break, Hasselbeck spoke again, saying: ‘It’s a hard, hard decision but that life has a plan and a purpose, and there are absolutely agencies out there that will help you keep that baby alive.’

Goldberg insinuated again that ‘everyone has the right to their options.’

Another co-host, Sara Haines, 44, reiterated that she wasn’t ‘murdering a baby’ if she chose an option, but rather, ‘choosing to do the right thing for my life.’

She also said ‘there’s a chance that each one of us could be wrong’ and said the ‘maker’ will decide if they were on ‘judgement day.’

Hasselbeck wasn’t alone at the table on her view of abortion being ‘murder,’ as Sunny Hostin agreed, however, the latter still believed Americans needed the right to choose.

Hasselbeck continuously implored the other hosts that there were ‘agencies out there,’ but the other hosts didn’t seem to buy it due to the high number of children in the system.

‘Some people don’t adopt certain types of babies,’ Haines said, although she didn’t specify what she meant by ‘certain types.’ She went on to say that the ‘system fails them.’ 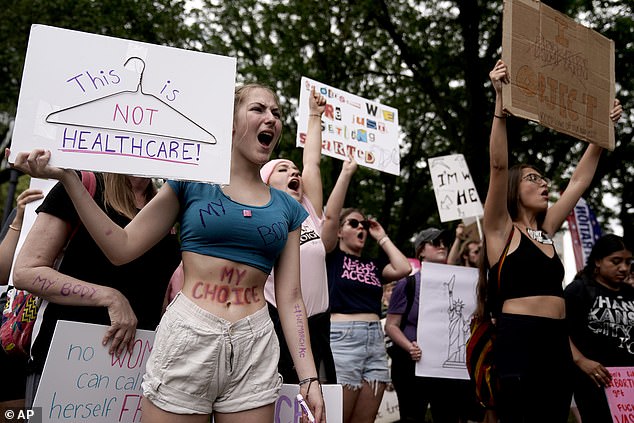 Many women have protested the overturn of Roe v. Wade as several conservative states threaten to pull women’s right to choose 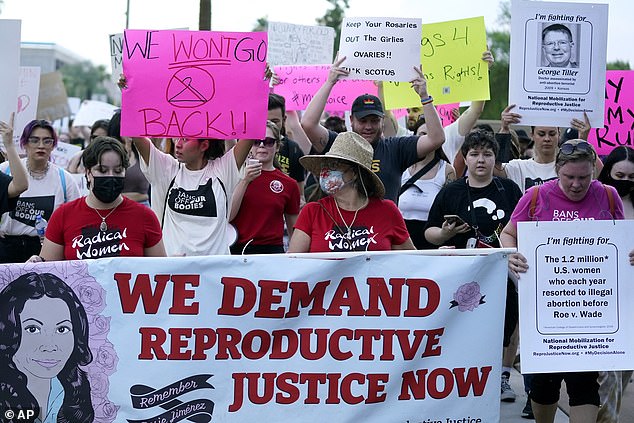 Many protesters in conservative states (pictured: Arizona) are preparing to vote on the issues

When pressed about the importance of the mother’s life, Hasselbeck questioned whether or not there had a be a choice at all.

Goldberg snappily replied as the segment closed: ‘Sometimes you do, just like you have to choose this conversation or the commercial.’

The ladies were on the topic of abortion – a hot-button issue since the controversial Roe v. Wade overturn by the Supreme Court – after Kansas citizens voted to protect abortion rights in the state.

Kansas voters sent a resounding message on Tuesday that they wanted to protect a woman’s right to an abortion — but they are not the only Americans who will be able to cast ballots on the hot-button issue.

By a landslide, roughly a 20-point margin, Kansans rejected a constitutional amendment that would have empowered state lawmakers to restrict or ban abortions in the state of nearly 3 million people.

Even voters in many rural, conservative areas of Kansas voted against the proposal, in what was a big victory for pro-choice groups after weeks in which many southern and Midwest states restricted or banned the procedure.

Who is Boris’ close contact? PM was ‘side-by-side’ with civil servant who tested positive for Covid