Ever since Britain had the temerity to vote for Brexit six years ago, The New York Times, America’s most prestigious newspaper, has had it in for us.

Numerous articles — many given front-page billing — regularly depict Britain as a plague-ridden, poverty-stricken hellhole in terminal decline. Sometimes the abuse is so over the top that the only sensible response is to laugh out loud.

For example, according to the paper, it’s only recently that we stopped existing almost entirely on a diet of ‘legs of mutton’ and ‘bowls of porridge’. Apparently, we still huddle round bin fires to keep warm in winter. And during the summer of 2020 it reported we spent the brief heatwave ‘cavorting’ in ‘swamps’.

The political analysis is often even more hilarious. Six months ago we were assured that Boris Johnson’s Britain was ‘sleepwalking into tyranny’. We already know that wasn’t the most perspicacious of predictions. 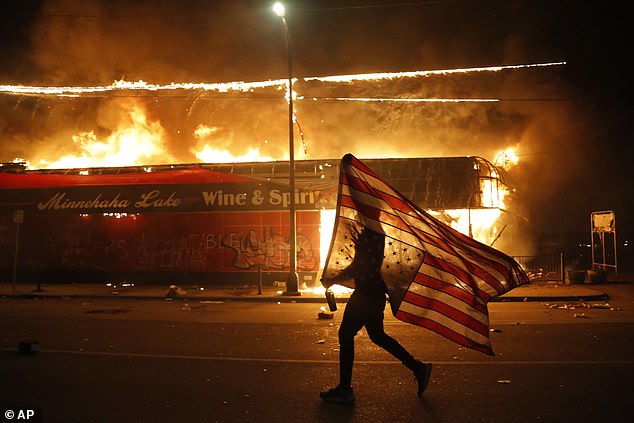 Ever since Britain had the temerity to vote for Brexit six years ago, The New York Times , America’s most prestigious newspaper, has had it in for us, writes Andrew Neil. Pictured: A protester carries a U.S. flag upside down, a sign of distress, next to a burning building in May 2020 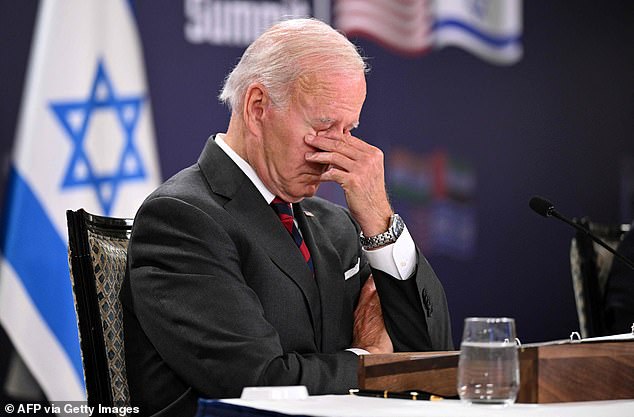 It never occurred to the great minds at The New York Times, who take themselves oh-so-seriously, that Johnson’s rule was always far more likely to end in farce than fascism 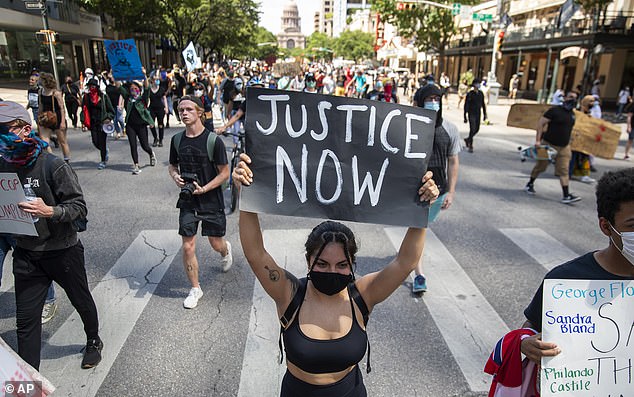 Protesters march south on Congress Avenue,  in 2020, in Austin, Texas 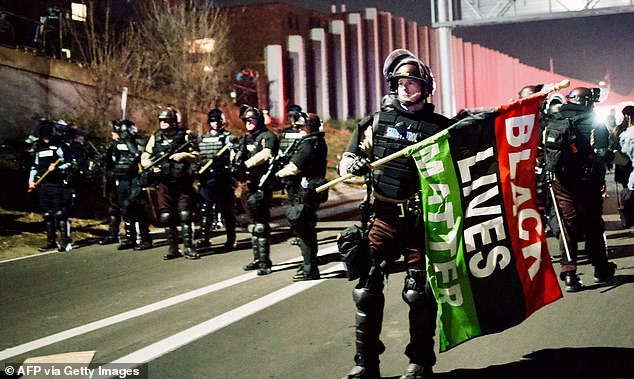 Out in force: Officers prepare for unrest during a march in Minnesota against racism ahead of the U.S. election in 2020

If Johnson had tyrannical ambitions, he wouldn’t be packing his bags to vacate 10 Downing Street next month merely because Tory MPs had forced him out. It never occurred to the great minds at The New York Times, who take themselves oh-so-seriously, that Johnson’s rule was always far more likely to end in farce than fascism.

The New York Times is America’s paper of record. It has long burst the boundaries of its home in the Big Apple. It is now a national newspaper with a global reach through its booming digital edition.

All the greater pity, given its influence in the U.S. and on the world stage, that when it comes to Britain you can’t trust a word it says.

The Old Grey Lady, as the paper is nicknamed because of its dreary layout and headlines, is about as reliable on Britain as its coverage of Stalin’s Russia in the 1930s, when its Moscow correspondent regularly insisted no one was short of food in Ukraine, only for less biddable journalists, including a number from Britain, to discover that Stalin was intentionally starving around 5 million Ukrainian peasants to death. 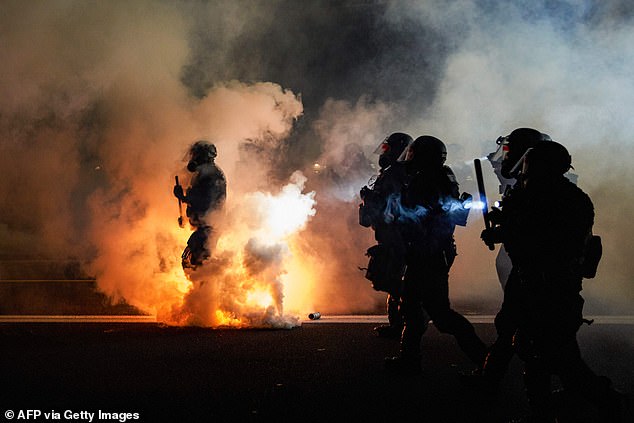 As to social fragmentation, America also has a lot more to worry about than Britain. The country is in the grip of a new and ferocious crime wave, with murder and violent attacks soaring these past two years

The New York Times won a Pulitzer Prize for its coverage of the Soviet Union in the 1930s. No doubt it can now look forward to another for its reports on Brexit Britain.

Over the past six years it has assembled an impressive array of Britain-haters to spread their bile.

Interestingly, they’re all British (but then we’ve never been short of British-loathing Brits). But it’s unlikely you’ve ever heard of them. The one who was so sure Johnson had the makings of a brutal despot is called Maya Lothian-McLean (nope, me neither).

Another unknown Brit called Richard Seymour was at it again on yesterday’s front page, where he opined that Brexit was cutting Britain ‘down to size’ and that we were ‘economically stagnant, socially fragmented and politically adrift’.

He quotes approvingly a Left-wing British historian, David Edgerton, who claims the very idea of the British nation is a ‘fantasy’; that it’s never really existed bar for a few decades after World War II; and that its break-up would be a good thing (all of which will be news to the rest of the world). Unsurprisingly, Edgerton has also written this guff for The New York Times.

The paper specialises in gory endings for dear old Blighty. Last month, it reported Britain was melting. The month before, it said we were sinking into the sea. So I guess break-up is the least of our worries.

Seymour is described as an editor of something called Salvage, which turns out to be a ‘non-dogmatic Marxist quarterly’ (there’s an oxymoron for you).

The ‘G’ in its masthead is the communist hammer and sickle (so maybe not as non-dogmatic as it claims). He used to be a member of the Socialist Workers Party, a tiny Trotskyite cabal famous for its infighting. He’s still a Marxist.

He was quite the fan of Jeremy Corbyn and, naturally, hates Margaret Thatcher, whom he describes as ‘vile’ and ‘reprehensible’. Just why the mighty New York Times thinks this unknown ideologue from the extreme British Left deserves its front page is baffling. 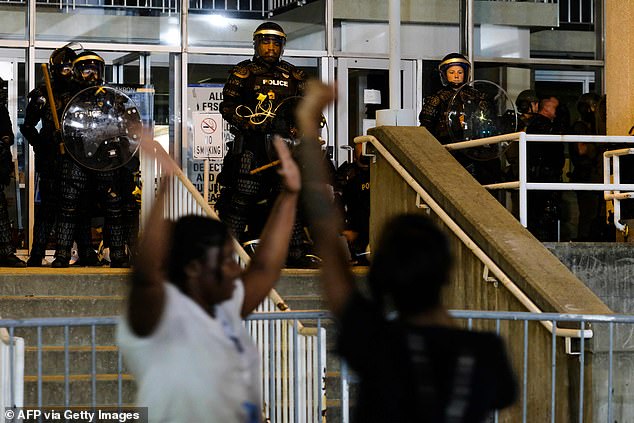 The sense of social breakdown in so much of urban America is palpable. So much so that Americans are buying guns in record numbers to protect themselves

So is the fact that the paper is more concerned with Britain’s supposed problems than those in its own backyard, which are far greater than anything we face.

After all, the major Western economy that is now ‘stagnant’ is not Britain but America, which has been in recession for all of this year so far.

All major economies are struggling with post-pandemic inflation, supply bottlenecks and slow growth. There is nothing exceptional about Britain in that regard. But it is the U.S. whose economy has been in decline this year.

As to social fragmentation, America also has a lot more to worry about than Britain. The country is in the grip of a new and ferocious crime wave, with murder and violent attacks soaring these past two years.

The centres of major cities, such as San Francisco and Los Angeles, are now hotbeds of open-air drug abuse, aggressive shoplifting and homeless encampments, where the streets are soiled with human excrement and littered with needles.

The sense of social breakdown in so much of urban America is palpable. So much so that Americans are buying guns in record numbers to protect themselves. Whatever social problems we have are simply nowhere as bad as in the U.S. 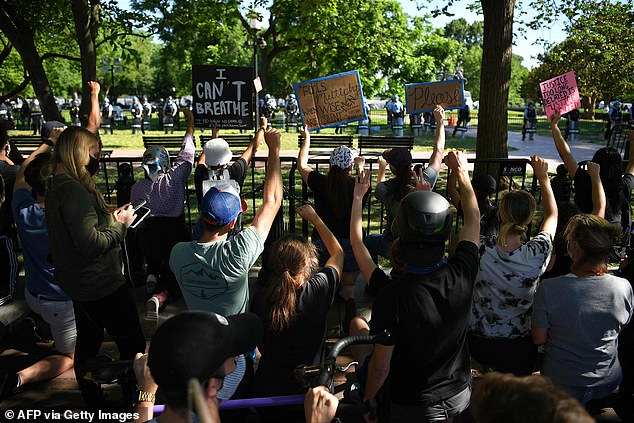 Protestors take a knee and raise their fists in Lafayette Square near the White House in Washington, DC in 2020

Of course, The New York Times covers these developments, but half-heartedly and without holding the politicians responsible to account.

That’s because they’re the result of policies pursued by Left-wing Democrats, from defunding the police and making shoplifting a minor misdemeanour to avoiding the incarceration of criminals at every opportunity — policies espoused by the very people The New York Times has urged Americans to vote for.

Nor is Britain anywhere near as ‘politically adrift’ as the U.S. The White House, the Senate and the House are dominated by a Democratic gerontocracy which has long outstayed its welcome and doesn’t much understand the 21st century. The Republicans are still in the grip of Donald Trump’s hostile takeover in 2016 and, until they shake free, cannot move forward.

Both parties are in rigor mortis. Neither has anything useful to say about the future. Both have never been further apart. Bipartisanship is dead.

Nowhere is this more apparent than when it comes to the U.S. Supreme Court’s decision to scrap abortion rights by repealing Roe v Wade — the landmark legal ruling of 1973. 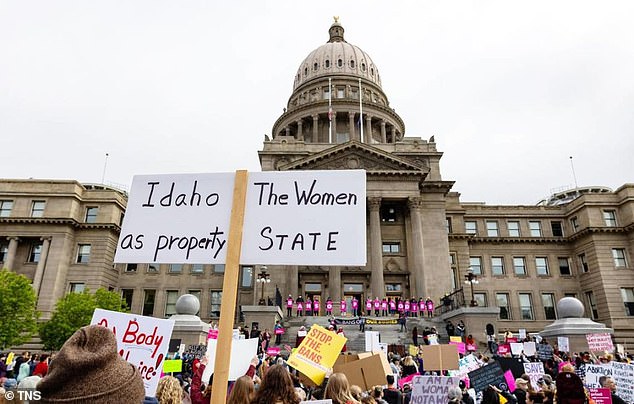 Both parties are in rigor mortis. Neither has anything useful to say about the future. Both have never been further apart. Bipartisanship is dead. Nowhere is this more apparent than when it comes to the U.S. Supreme Court’s decision to scrap abortion rights by repealing Roe v Wade — the landmark legal ruling of 1973

It has created another ugly divide in American society, one the President is stoking for all he’s worth. ‘This fall, Roe is on the ballot,’ Joe Biden told U.S. voters in the wake of the court’s decision in June in a reference to the upcoming mid-term elections in November.

An undertow of violence lurks in America’s political discourse, too. If the 2024 presidential election is as close as 2020 then the loser will likely not accept the result (like Trump in 2020), thereby triggering a constitutional crisis (and possible widespread unrest) as dangerous as any since the American Civil War more than 160 years ago.

Britain’s politics are positively genteel in comparison. A new prime minister is being chosen by the party with a majority in the House of Commons, as it was when Thatcher stood down in 1990, Tony Blair retired in 2007, David Cameron resigned in 2016 and Theresa May in 2019.

As with these previous changes of leader outside the normal election cycle, it is being done without social unrest or gunfire. No mobs are storming the Palace of Westminster. The military has not been mobilised to keep the peace.

The broadcast media covers it all fairly and without pushing its own favourites, unlike American broadcasters, who are now dangerously partisan and making the underlying divisions worse.

There is a further problem for America. The university campuses, the media and even corporate America are now increasingly in thrall to the Left-liberal ideology of identity politics, better known as wokery. 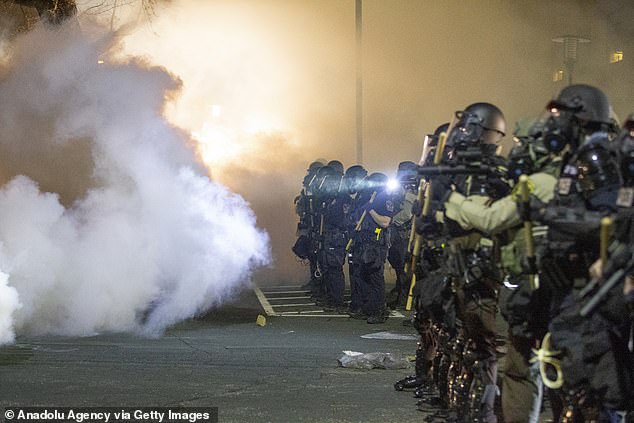 Even powerful people are afraid to say what they think, lest it unleashes a social media lynch mob against them. A groupthink which tolerates no deviation on racial or gender matters is in the ascendency, snuffing out free speech in the process.

It started in America’s universities, especially the elite ones, more than a decade ago. That generation of students has now moved into the country’s newsrooms and boardrooms, taking their wokery with them.

With only a few exceptions, American media is now pretty much a one-party state when it comes to such matters, with The New York Times the cream of the crop.

Corporate boardrooms are succumbing, too. Barely a week goes by now without some major U.S. company — be it retail giant Walmart or Delta Airlines or Coca-Cola or McKinsey & Co, the giant consultants, or Disney — touting their woke credentials with some asinine statement about race or gender.

Policy is being polluted in the process. San Francisco — after changing the names of any high schools named after Lincoln or Washington (hitherto America’s most revered presidents) — is at the centre of a California-wide initiative to make social justice an integral part of maths teaching.

Oregon has gone one better. It has suspended proficiency in reading, writing or maths as a necessary condition for high-school graduation because it will supposedly help non-white students. 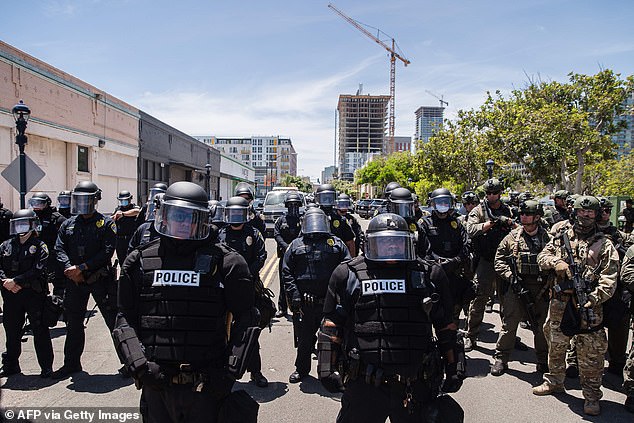 And there you have the woke solution in all its absurd glory: don’t fight racial disparities with better teaching and schools for minorities, just ban the testing — then there will be no visible disparities (until, that is, it’s time to apply for a job).

A proper U.S. newspaper would fill its columns exposing this nonsense day in, day out, fulfilling its public duty in the process. But on such matters The New York Times is part of the problem, not the solution.

As America is confronted by dictatorships on the march, from Moscow to Beijing, its greatest newspaper prefers to beat up on Brexit Britain. It is leaving America unfit to deal with the geopolitical challenges of the 21st century.

That doesn’t concern The New York Times’s useful idiots on this side of the Atlantic. They’re just happy to put a well-remunerated boot into Britain on the paper’s behalf.

Its British coverage has now degenerated into a joke. No one here takes it seriously, bar a few obsessive Remainers. But we will all suffer — not just America — for The New York Times’s failure to do its proper job in its homeland.

Police suspect £1m raid at castle was an INSIDE JOB

UK inflation: Why is it high, what does it mean for you and will it get worse?