Social media users have been left in stitches by the Wagatha Christie court sketches – with some saying the artists have made Wayne Rooney look like a ‘potato’.

The former Manchester United star and current Derby County manager, 36, was one of those to get the court sketch treatment while attending his wife Coleen Rooney’s High Court libel battle with fellow WAG Rebekah Vardy.

It was sparked after Coleen claimed stories about her had been leaked from Rebekah’s Instagram account following her own social media investigation – which involved her posting made-up stories which only Rebekah’s account could see.

The stories made it to the Sun, leading her to publicly accuse Rebekah’s account of leaking the stories to the newspaper.

It earned Coleen the title ‘Wagatha Christie’, while Rebekah started legal proceedings, claiming she had been libeled.

Now, after two years of legal toing-and-froing, the pair are battling it out in London’s High Court – in one of the most eagerly anticipated civil cases in recent memory.

But amid the stunning back and forwards between the two WAGS, another element of the case has drawn attention – the court sketches.

One fan, commenting on the court sketch of Wayne, wrote: ‘Tyson Fury will be furious.’ 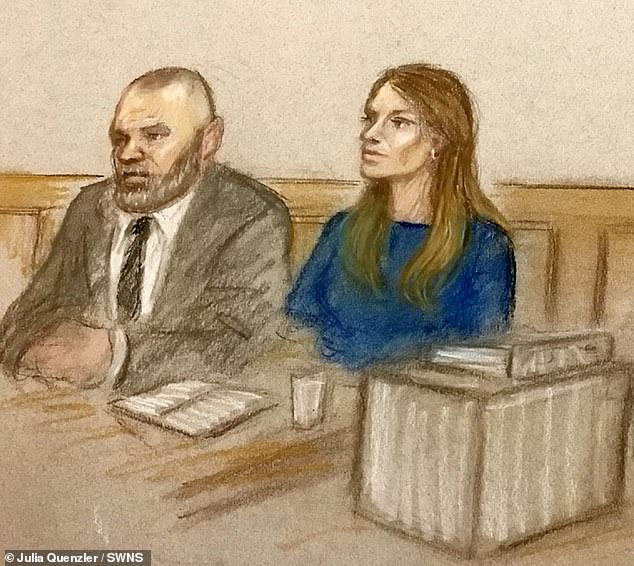 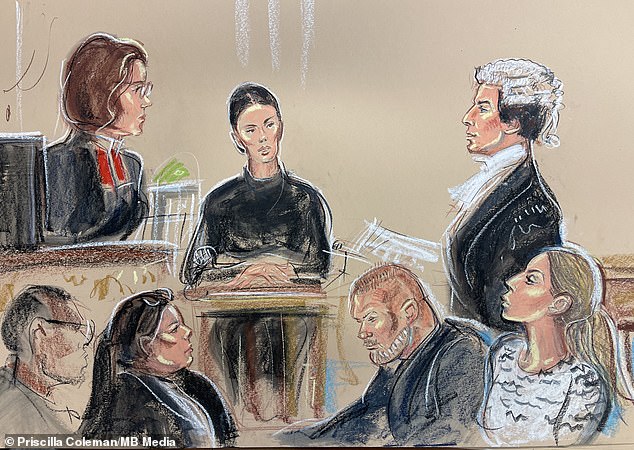 A court sketch showing Rebekah Vardy (middle) appearing in the witness box in front of the Rooneys, with Wayne (third from right) unable to look at her 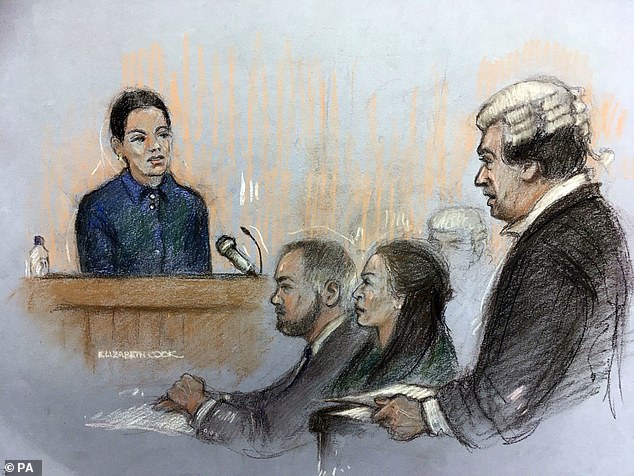 Court artist sketch of Rebekah Vardy giving evidence at the Royal Courts Of Justice, London, during the high-profile libel battle between herself and Coleen Rooney

Another said: ‘That’s taken artistic liberty too the extreme.’  And one Twitter user simply described the person in the snap in one word: ‘Potato!’

Another joked: ‘This court sketch of Wayne Rooney has finished me.’

Because it has been – in almost every instance – illegal under UK law to take photographs and video inside courts, news organisations often commission artists to make court sketches.

The artists are highly skilled and face a difficult task, because they are only allowed a few minutes to make a series of base lines.

They then leave the courtroom, and usually sit in the foyer of the court, where they expand on their marker lines purely from memory.

Court artists also have to work at pace, with the images needed 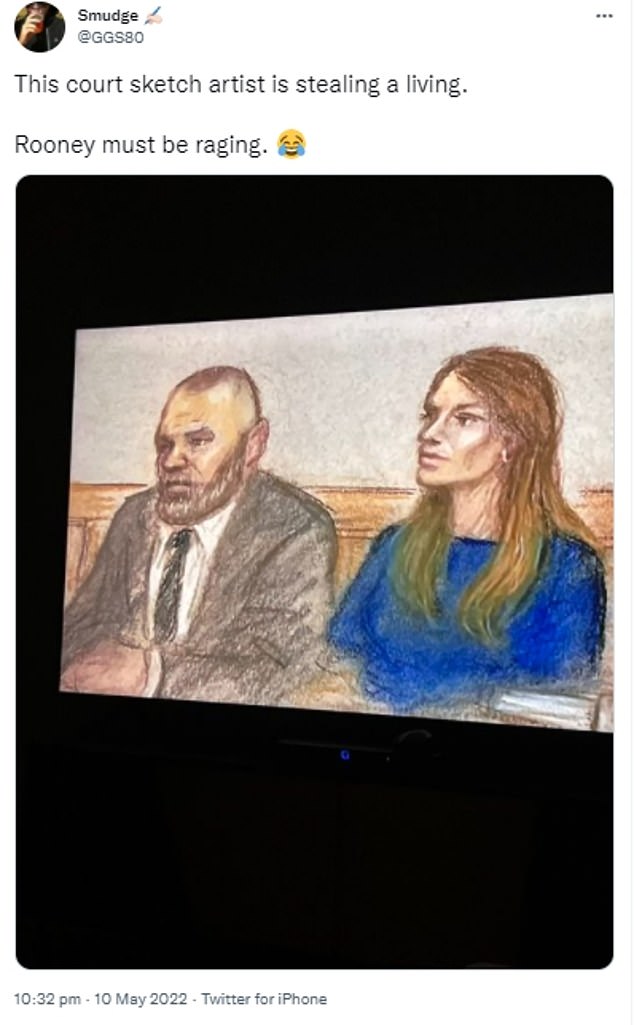 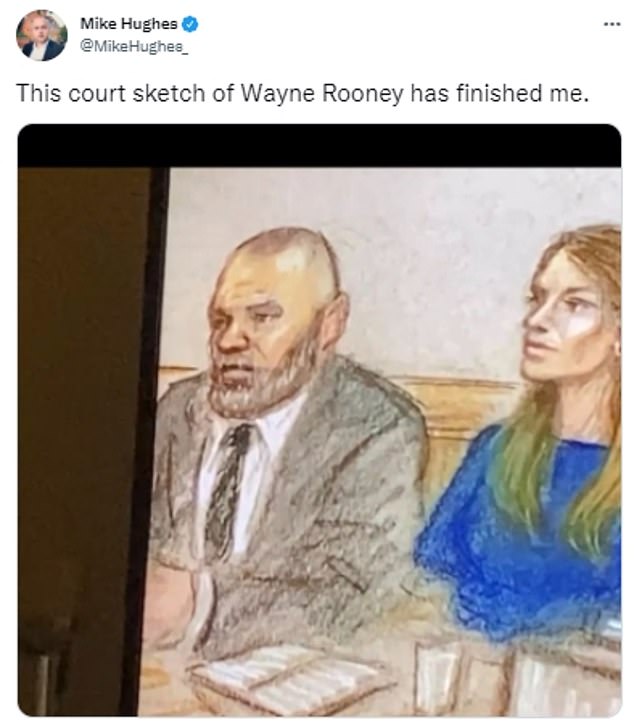 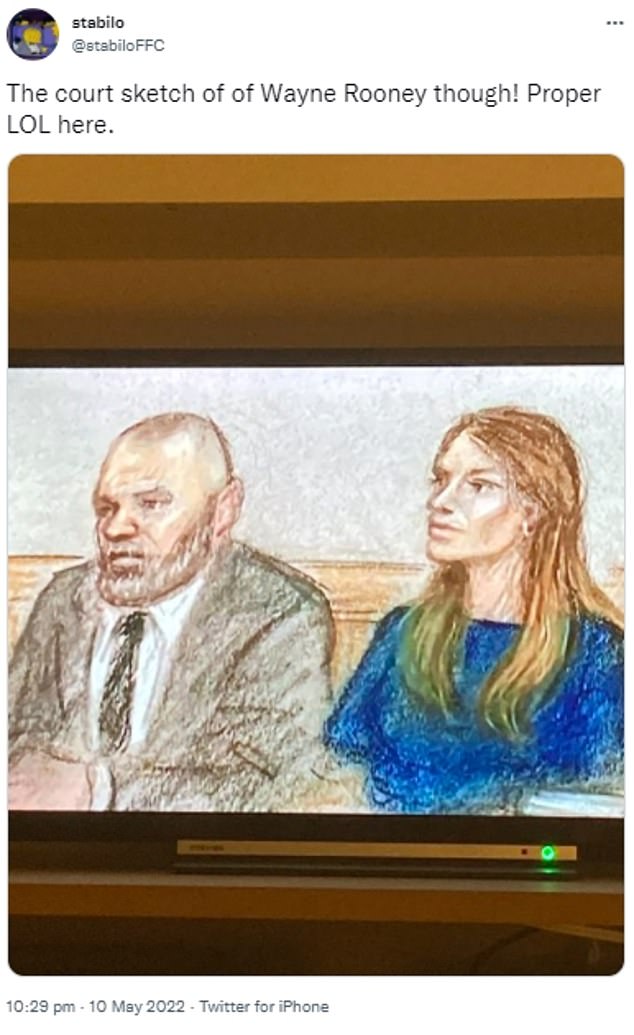 Today the trial heard how Rebekah Vardy told her agent to leak stories about a celebrity ‘s******g’ a well-known footballer and how Leicester players were ‘fuming’ at Riyadh Mahrez – before saying she ‘wanted paying’ for a trip about Danny Drinkwater’s drink-driving arrest.

Rebekah took to the witness stand again this morning for another grilling under the glare of her bitter rival Coleen Rooney, 36, who – in October 2019 – accused the 40-year-old of leaking stories about her private life following a social media ‘sting’ operation.

Coleen publicly claimed her fellow WAG of sharing three fake stories she had posted on her personal Instagram with The Sun, an allegation Rebekah vehemently denied – leading her to launch the £3million legal action which is now in its second day.

Today, Coleen’s barrister David Sherborne read out a series of texts in which Rebekah had told her agent Caroline Watt to ‘leak’ stories about Mahrez and one unnamed high-profile celebrity.

In response, she insisted these exchanges were ‘never serious’ and Ms Watt would have ‘understood’ this – prompting Mr Sherbourne to accuse her of lying under oath.

Rebekah, did, however, admit to sharing a tip about Drinkwater leaving custody following his arrest for drink-driving. The WAG said she did so because she was ‘deeply affected’ by drink-driving because her ex-husband ‘killed two people’.

Asked about a text where she told Ms Watt she ‘wanted money’ for the tip about Drinkwater leaving custody, she insisted she was joking. 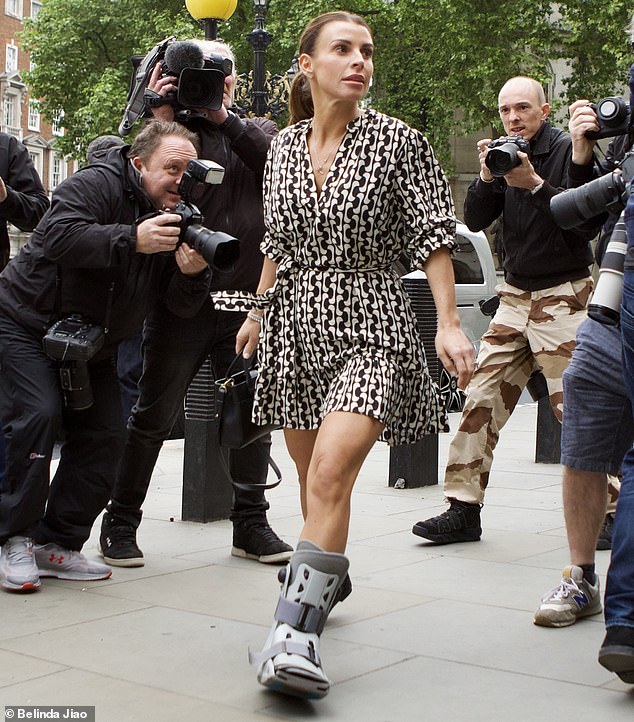 Coleen Rooney arrived at the Royal Courts of Justice wearing a £32.99 white and black patterned Zara dress while her left foot was still in a brace following an accident at home 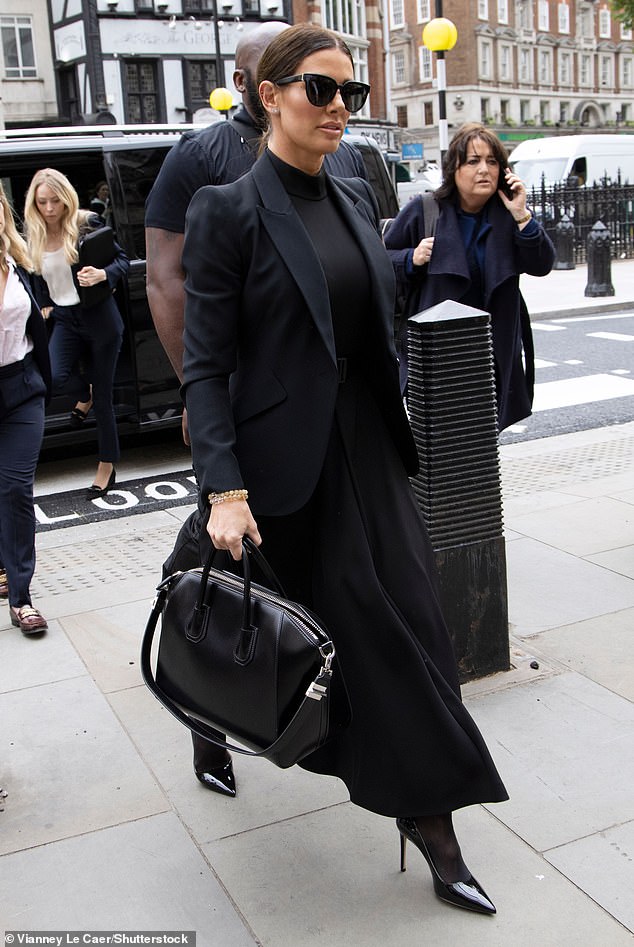 Coleen was seen furiously taking notes throughout Rebekah’s cross-examination, while Wayne looked straight ahead, unable to look at his wife’s enemy as she gave evidence.

Mr Sherborne questioned Rebekah about what she said in reference to a story about a woman named only as Mrs F – a ‘well-known celebrity’ – her estranged husband Mr H and Mr G, a ‘well-known footballer’.

Rebekah told her agent Ms Watt that she should ‘leak the story about her s******g G behind H’s back’,’ Mr Sherborne said. Rebekah said she was ‘a bit shocked and a bit disgusted about what I’d seen in the paper’.

Mr Sherborne asked whether she was so annoyed that she had instructed Ms Watt to leak a story about Mrs F allegedly cheating.

Rebekah was also asked about claims she tried to ‘do the dirty’ and spill the beans on unrest in the Leicester City dressing room when star player Riyad Mahrez went ‘on strike’.

The court heard Rebekah contacted her agent Caroline Watt after Mahrez failed to turn up for training for the second day running. At the time of the exchange in February 2018, Mahrez was seeking a move to Manchester City.

In the WhatsApp message, Vardy wrote: ‘Mahrez not turned up for training again. The lads are fuming.’ 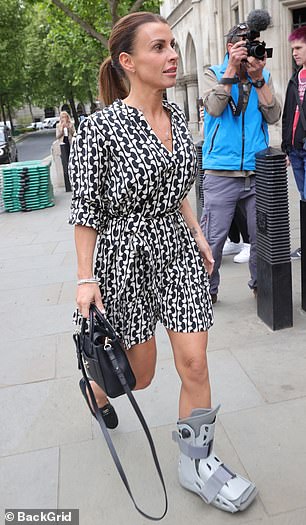 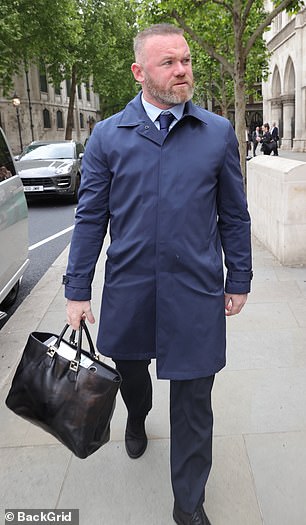 Coleen was once again accompanied by her Derby County manager husband Wayne (right), who carried a leather handbag containing a file

Ms Watt suggested she contact TV reporter Rob Dorsett, who was one of the journalists covering the story for Sky Sports News.

Rebekah replied that she didn’t want the story to ‘come back on me.’

Under cross examination, Rebekah said: ‘It was pretty much unheard of for a player to go one strike and not turn up for training.

She said the story of the turmoil in the dressing room ‘absolutely 100 per cent did not come from me’.

But she admitted that ‘in a fleeting moment’ it appeared from Watt’s response that she was ‘prepared to do her dirty work’ for her.

She insisted the information didn’t come from husband Jamie, Leicester City’s star striker, saying: ‘It was speculation of just bits of information that I had heard and overheard, and also read in the press before.’

She added: ‘Yes, it doesn’t look good there, I was gossiping about things that were already in the public domain. I was just gossiping.’