The Australian Cricketers’ Association has leapt to the defence of Tim Paine, stating he should not have stood down as Test skipper after his role in a sexting scandal back in 2017 was exposed on Friday.

In a statement, the ACA said they were ‘saddened’ that Paine felt the need to resign as captain of the Australian Test team.

‘While regrettable, this was a historical mistake that was a private matter between consenting individuals. Tim fully cooperated in an integrity investigation by Cricket Australia in 2018 in which he was exonerated,’ the statement read.

‘Tim humbly recognised the respect that comes with the Australian captaincy and his resignation reflects the esteem in which he held the role he served so well in a trying period for Australian cricket.’

The statement went on to outline Paine played ‘a crucial role in restoring pride back in the Australian team’ following his 2018 appointment and despite his mistake, he has ‘the full and unequivocal support of the ACA.’ 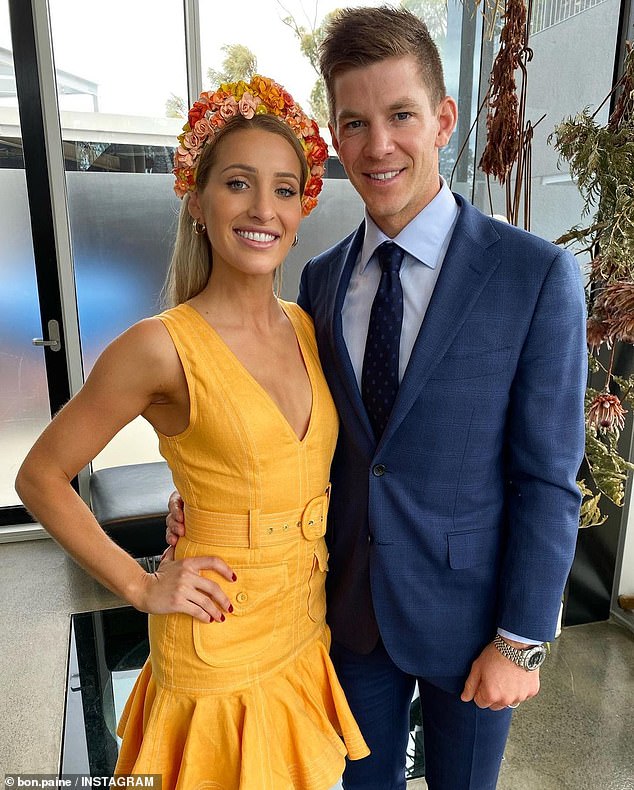 The Australian Cricketers’ Association has leapt to the defence of Tim Paine, stating he should not have stood down as Test skipper after his role in a historical sexting scandal was exposed (pictured, Tim Paine with his wife Bonnie) 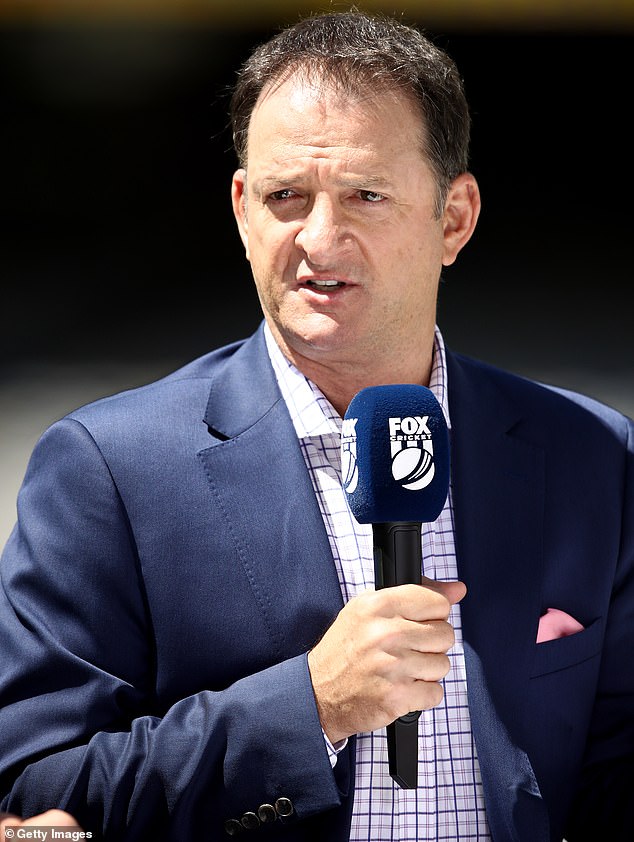 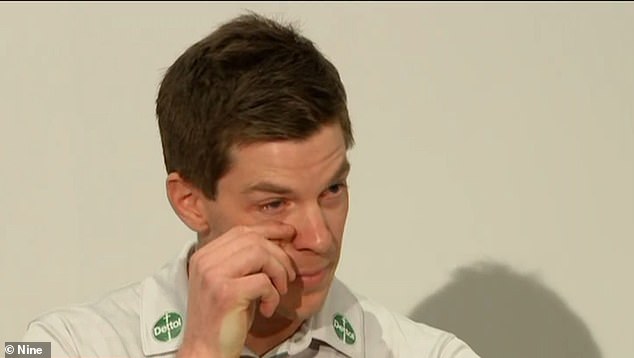 The father-of-two tearfully resigned as the captain of the Australian cricket team on Friday afternoon, a short time after he learned the sexting scandal from 2017 would be made public

Fox Sports commentator Waugh said he will be stunned if Paine is given an opportunity to again don his baggy green this summer and beyond.

‘I’d say it’s going to be tough for him to hold his spot in the team now,’ he told 2GB’s Jim Wilson.

‘He’s 36 years of age, he’s coming back from injury, and now he’s got this scandal hanging over his head.

‘There’s a lot of things against Tim Paine now.’

Waugh expects vice-captain Pat Cummins to take over as skipper, with Steve Smith – who stood down from the top job in 2018 soon after the infamous ball tampering scandal in South Africa – his likely deputy.

He also believes Alex Carey will be Australia’s new face behind the stumps for the first Ashes Test in Brisbane next month.

Cricket Australia chair, Richard Freudenstein, said the board accepted Paine’s resignation before pointing out he was ‘cleared of any breach of the code of conduct regarding this matter some years ago.’

On Friday afternoon, Paine relinquished his coveted role after details of his lewd behaviour publicly emerged.

Paine, 36, sent a photo of his penis to a female co-worker along with a stream of lewd text messages, many of which are too raunchy to publish.

‘Will you want to taste my d**?? F**k me, I’m seriously hard,’ one of the messages sent to the Cricket Tasmania employee read.

Paine, who has led the team since the Sandpapergate ball-tampering scandal in 2018, held a press conference at 2.30pm on Friday where he tearfully apologised and announced he would step aside.

The lewd messages were sent on November 22 and 23, 2017, the eve and morning of the first Ashes Test at the Gabba in Brisbane.

Cricket Australia was not aware of the messages until after Paine, a father of two, was appointed Test captain in March 2018 in the wake of the ball-tampering scandal. 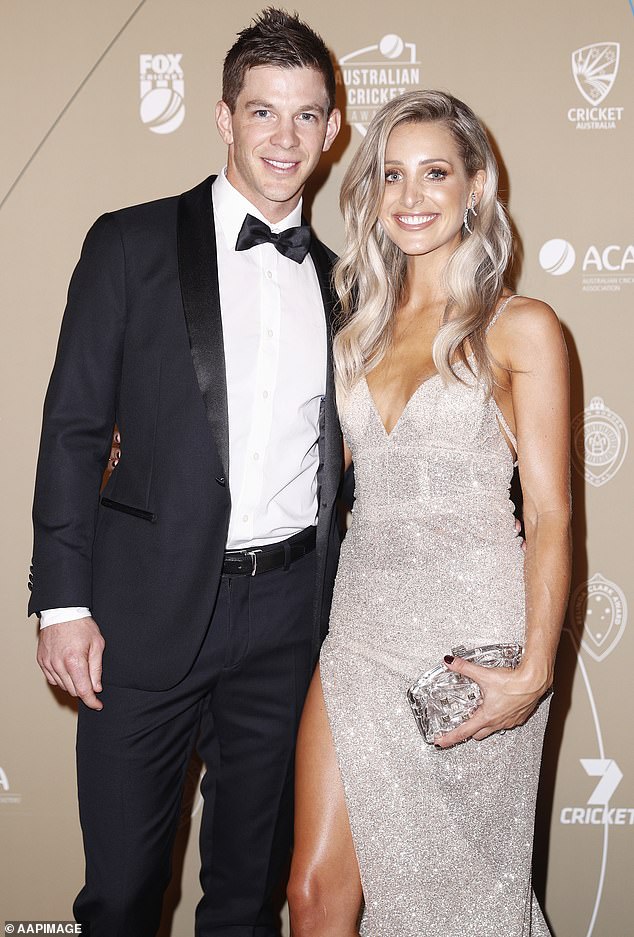 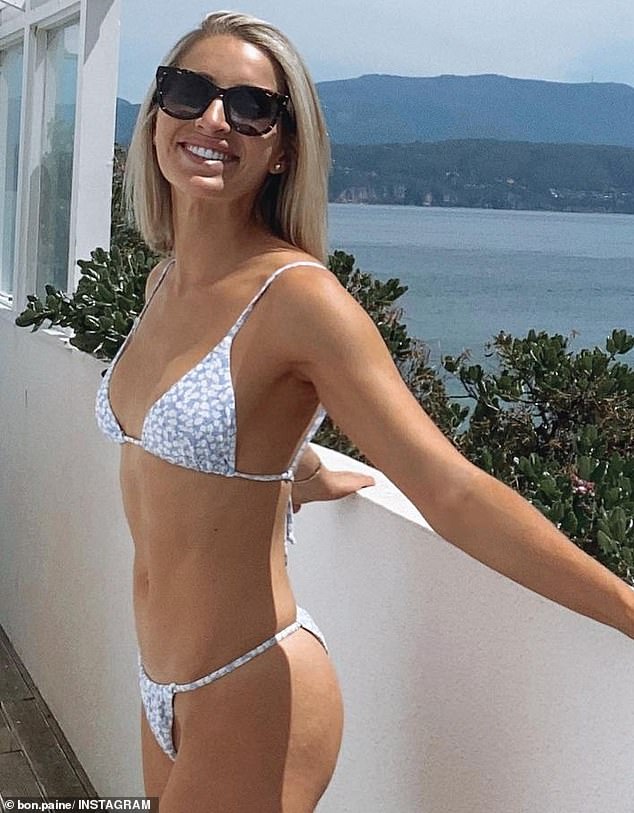 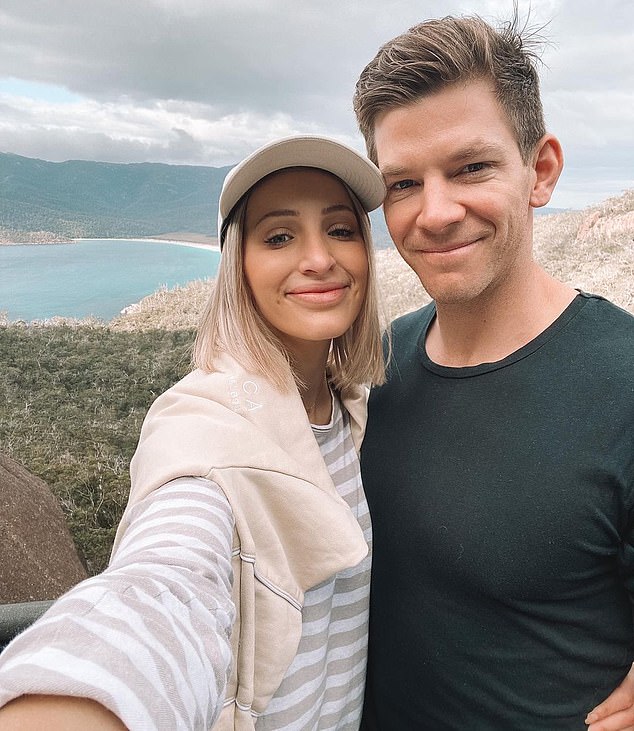 While news broke of the scandal on Friday, Paine said he and his wife worked through the betrayal at the time and that she’d forgiven and supported him

Paine was brought in as the saviour of Australian cricket in 2018 after captain Steve Smith and vice-captain David Warner were suspended, along with opener Cameron Bancroft.

The trio was caught on camera using concealed sandpaper to rough up the ball during the tour of South Africa.

Cricket Australia is believed to have found out about the sexting in June 2018 and launched an investigation, along with Cricket Tasmania.

The woman complained in 2018 about ‘Mr Paine’s sexually explicit, unwelcome and unsolicited photograph of his genitals in addition to the graphic sexual comments’.

She is said to have been taken aback by the comments and pornographic photo, which she found offensive.

His wife Bonnie, whom he has been married to for five years, was also aware of the messages – but chose to stick by him. 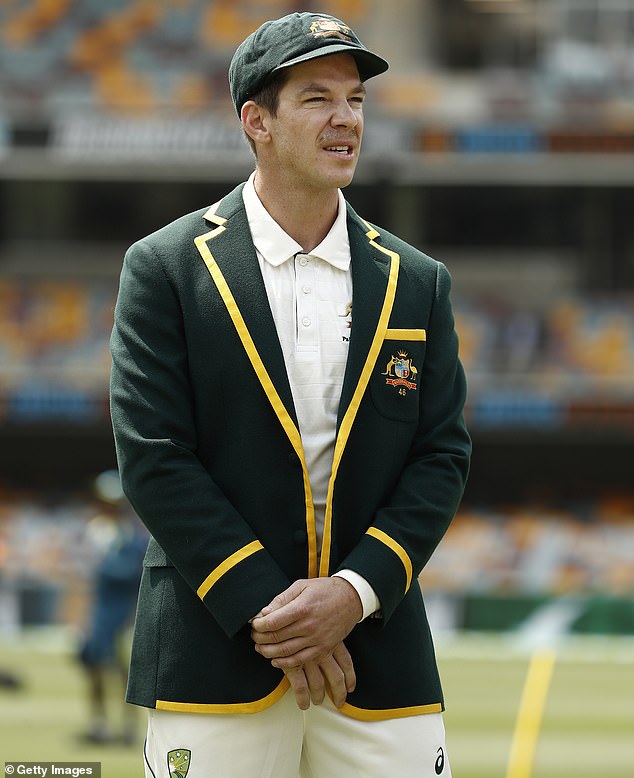 Paine was the shock new face of Australian cricket in 2018 after captain Steve Smith and vice-captain David Warner were suspended, along with opener Cameron Bancroft

‘Although exonerated, I deeply regretted this incident at the time, and still do today,’ Paine said on Friday.

‘I spoke to my wife and family at the time and am enormously grateful for their forgiveness and support.

‘We thought this incident was behind us and that I could focus entirely on the team, as I have done for the last three or four years.

‘However, I recently became aware that this private text exchange was going to become public.

‘On reflection, my actions in 2017 do not meet the standard of an Australian cricket captain, or the wider community.

‘I’m deeply sorry for the hurt and pain that I have caused to my wife, my family, and to the other party. I’m sorry for any damage that this does to the reputation of our sport.’

Australian captain Tim Paine walks to change ends during a cricket test against India at the Sydney Cricket Ground, in Sydney, Australia on Jan. 9, 2021

2010: Tim Paine makes his Test debut against Pakistan, replacing injured Brad Haddin, but is dumped upon the incumbent’s return

November 22-23, 2017: Paine sends lewd messages to a female coworker on the eve and morning of the first Ashes Test in Brisbane. The pair had exchanged texts throughout the year

March 28, 2018: Paine is appointed captain for the 4th Test of the series, becoming the 46th captain of the Australian side

November 19, 2021: Paine steps down as full details of the explicit messages surface

DAN HODGES: What happens the next time Boris Johnson turns to voters and begs: Please trust me?