That was close! Woman uses her ninja-like reflexes to catch her dog, Clarence, after ‘clingy’ six-year-old falls from a bathroom window as she tried to stay close to her owner

This is the heart-stopping moment a woman with ninja reflexes caught her ‘clingy’ dog after it plunged over 20ft from an upstairs window.

CCTV footage shows the woman chatting to a window fitter on her doorstep in Hawkinge, Kent, when she suddenly notices something out of the corner of her eye.

Looking up, she can see her six-year-old female border collie Clarence has pushed open a bathroom window and is about to pass through it.

She quickly says to the man, ‘Oh my God, get back’ and darts into place, ready to catch her.

As Clarence plummets down, the woman manages to grab hold of her just inches away from a hard landing. 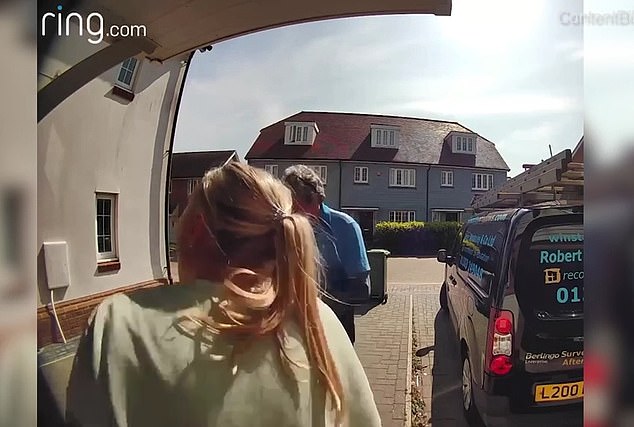 The woman was chatting on her doorstep in Hawkinge, Kent, when she noticed a shift in the reflected sunlight from an upstairs window

With lightning instincts, the woman grabbed hold of Clarence as she fell and scooped her up, saving the dog from a painful hard landing

‘Oh my God… oh my God,’ the woman repeats as she cradles the dog in her arms.

When asked about the incident, the woman said: ‘No she’s never done that before and she’s six so it was a bit of a shock!

‘She’s always been an independent dog but I guess she’s become clingy since the pandemic and working from home, she always wants to be by my side.

‘I just didn’t realise how far she’d go to do that!

‘The windows were shut but she managed to push one wide open. I only noticed she was there because the sun’s reflection on the wall moved and caught my eye.’

Users on social media were quick to praise the woman’s lighting instincts, which almost certainly saved her dog from broken limbs.

Valeria D’Alcantara wrote: ‘Well done!!! Crikey, that was too close!’ 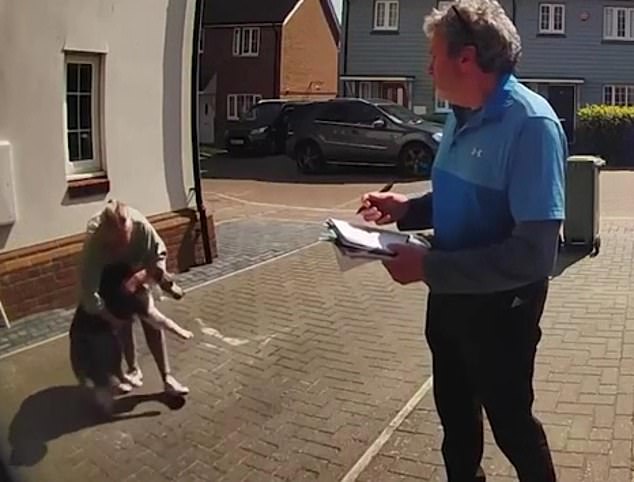 After a saving her from certain injury, the woman releases Clarence who was ‘absolutely fine’ after her airborne adventure

Amber Eyles said: ‘That was truly a heroic effort and truly an amazing save for your dog! Truly incredible and one of the luckiest saves for that doggie.’

Patricia Finch posted: ‘Thank God you have the reflexes of a ninja, thank God your dog didn’t get hurt.’

Chalembi Chanu added: ‘A huge round of applause for the lady owner for her quick smart action on time that saved her dog.’

Her owner added: ‘Main thing is, my dog is absolutely fine and suffered nothing more than a sore leg for a couple of hours. Lucky!

‘Oh, and I was outside for five minutes max, so not like she’d been there long!’

‘We are not inherently male or female’: Stonewall campaigner says bodies ‘are just bodies’