A Wyoming teenager who believes that mask mandates violate her constitutional rights was arrested for trespassing after she refused to leave school grounds Thursday – and she’s since raised $53,000 in donations.

Grace Smith, a 16-year-old junior at Laramie High School in the city of Laramie, was handcuffed and taken to jail after a 90-minute schoolwide lockdown.

Smith, who calls herself a straight ‘A’ student and who has never broken the law, has received three separate two-day suspensions and racked up $1,000 in trespassing fines for not wearing a mask and refusing to leave campus.

She followed the first suspension, but contested the next two.

‘I just left,’ the teen told the Laramie Boomerang about her first run-in with administrators. ‘Then, after talking with our attorney, we decided to push it, so on Tuesday I didn’t (leave) and took the citation for $500 and then left.’

On Thursday, she got another ticket but refused to leave, prompting a showdown in the middle of the school building. 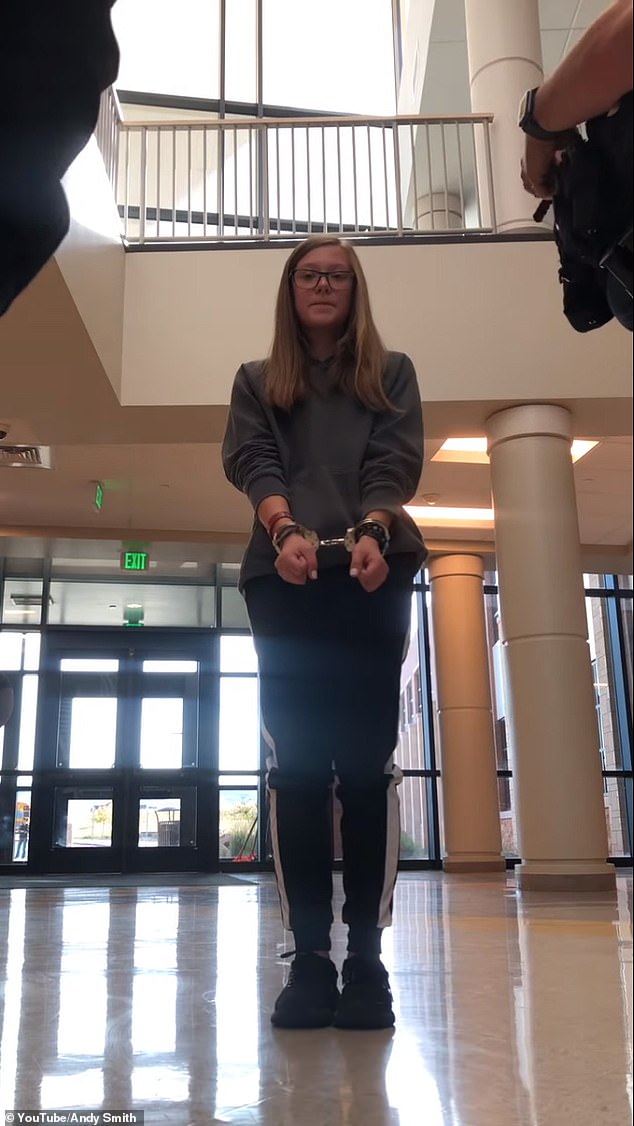 Grace Smith, 16, was arrested after she refused to leave Laramie High School in Wyoming on Thursday. She had received a trespassing ticket for staying in school without a mask 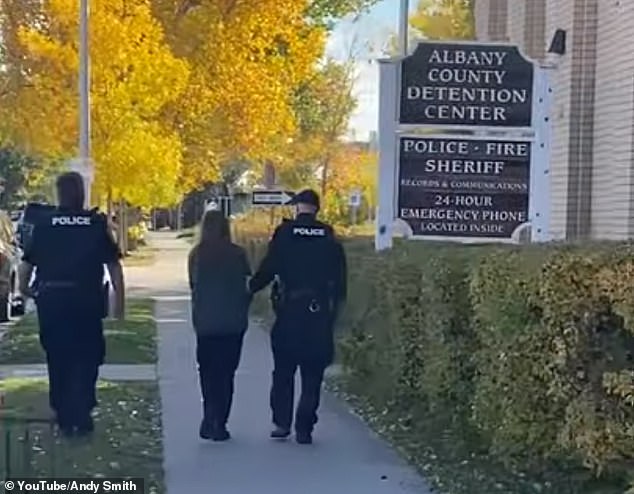 The teenager was perp-walked to the local jail, with her father Andy tailing her with a camera

The Albany County School District #1 began requiring masks inside their buildings on September 8. The school board will decide on an extension this week.

A district spokesman told DailyMail.com that he’s unsure whether Grace returned to school on Monday, the first day she would’ve been allowed back after Thursday’s suspension.

Video captured on Smith’s phone shows an officer trying to reason with the teenager.

‘So you’re still refusing to leave?’ he asks.

‘Even after you’ve received your citation?’ the officer adds.

‘All right, then at this point I am going to place you into custody for trespassing,’ the officer says.

A second video posted on YouTube by Grace’s father Andy shows his daughter being led to the Albany County Detention Center, where the teenager peers over an officer’s shoulder at her filming father. 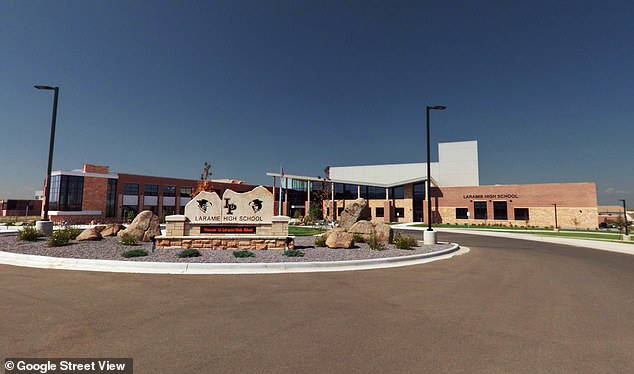 The Albany County School District #1, where Laramie High (above) is located, has had a district-wide mask mandate in place since September 8. It will review it this week

Explaining her beliefs, Smith said: ‘It’s because I’m growing up in a country where I’m supposed to have my God-given rights to protect, and they’re being taken away.

Grace now faces the possibility of expulsion, which kicks in after 10 days of suspension. She’s racked up six during the course of her crusade.

About 49 percent of Albany County residents are fully vaccinated, compared to the US average of 56.4 percent.

As of Monday afternoon, Grace has raised $53,275 on GiveSendGo, a right-wing donation platform popular with January 6 Capitol rioters.

‘Grace has chosen to exercise her rights and attend school without wearing a mask. The local school board has voted to enforce a universal mask policy that we believe is unlawful and in violation of the constitution of the state of Wyoming,’ the donation page reads.

‘Grace has endured suspensions and was arrested for not wearing a mask. She has also been targeted by peers and school staff members for exercising her rights.

‘Grace is raising funds to help with the legal cost of defending her civil liberties and the civil liberties of other students in Wyoming who are enduring the same unlawful treatment.’

Grace maintains that the choice to keep butting up against her school’s rules is hers alone.

‘It was my choice. I started refusing masks, and I told them about that,’ she said of her parents. ‘But they’ve been supporting me, and they’ve made it clear this is my choice.’ 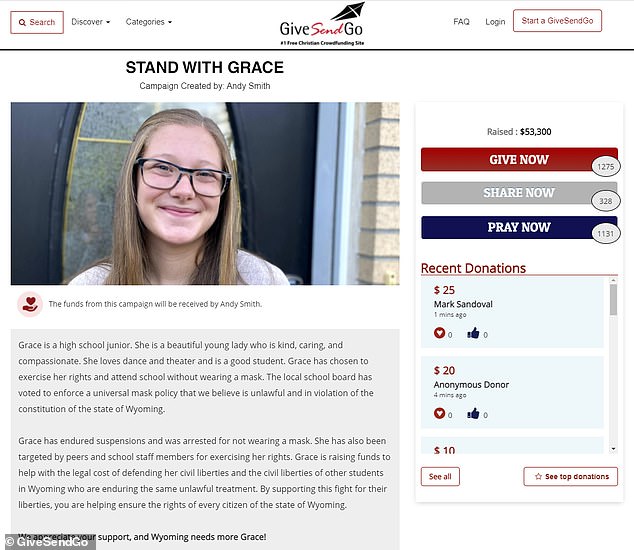 Grace has since raised over $53,000 on right-wing donation platform GiveSendGo 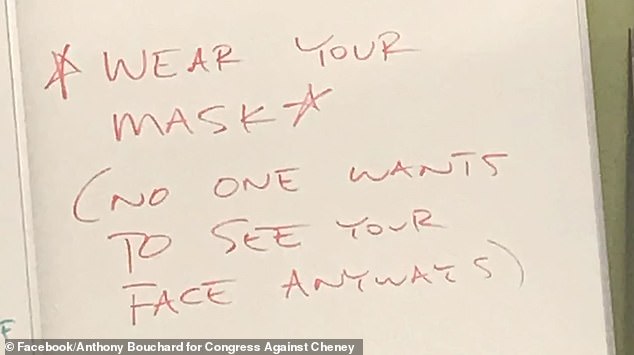 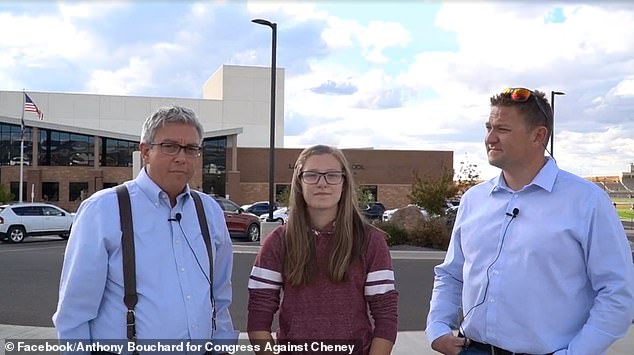 Grace believes it’s her constitutional right to not have to wear a mask. Above, she appears in an interview with Congressional hopeful Anthony Bouchard (left) and her father Andy (right)

The teenager said she’s paid a price for her anti-mask convictions.

‘I get cussed out a lot,’ she told the Boomerang. ‘People have called me mean names. Nobody has physically harmed me, but some of my best friends now won’t talk to me.

‘The discrimination from the teachers is just absurd,’ Grace added. ‘I had one teacher who tried to force a mask onto my face.’

The Albany school district said the lockdown was ‘issued in order to prevent further interruptions to academic learning.’

Grace said, ‘It’s pretty likely some will hold (the lockdown) against me, too, but I would never purposely try to hurt anybody.’

The same day of the arrest, Grace and her father were interviewed by Wyoming state Sen. Anthony Bouchard, who is running for the US House of Representatives.

‘We had it on record in an interview with law enforcement agents last week where they said they would not arrest her,’ her father Andy said.

Yowie Bay, Sydney: Dog tied to block of CEMENT and dumped in a river as cops charge man with torture