Ministers are facing yet another Christmas crisis hours after claiming they had solved the UK’s C02 shortage as thousands of shipping containers are backing up at Britain’s biggest port due to the UK’s dearth of HGV drivers.

Felixstowe in Suffolk has become severely congested to the point that Maersk, the world’s largest container shipping company, is diverting its big vessels away from the UK because it the dockside is full.

Some ships are now being sent to European ports with containers moved via Dover or other ports because they believe it will be quicker.  Inside the containers are tens of thousands of tonnes of goods destined for shops, supermarkets and households, including families already buying Christmas presents.

Maersk boss Lars Mikael Jensen has warned that retailers may need to prioritise what they ship to Britain in the coming months, adding: ‘Felixstowe is among the top two or three worst-hit terminals [globally]. We are having to deviate some of the bigger ships away from Felixstowe and relay some of the smaller ships for the cargo’.

Pictures from the port on the Suffolk coast today show it is rammed with containers piled up over the gigantic dockside, as the British International Freight Association said it understood average ‘dwell times’ for cargo at the port have nearly doubled in the last two weeks, from five to 9.7 days.

It came as Boris Johnson sealed a deal to reverse the shortage of CO2 for use in beer and food production but shoppers will be paying more for staples almost immediately after the US company producing 60% of the UK’s supply allowed to up its prices from £200 to £1,000 per ton.

The price of the gas, which is used to carbonate drinks, preserve food and stun animals for slaughter, is expected to rise five times after the country’s biggest manufacturer threatened to shut its UK factories.

The shortage of C02 is part of a storm of crises the Government is accused of failing to get a grip on, including a shortage of fuel and 100,000 HGV drivers, a lack of food processing workers and butchers due to the pandemic and Brexit, gaps in the global supply chain and the highest rise in energy prices for decades hitting households and businesses. 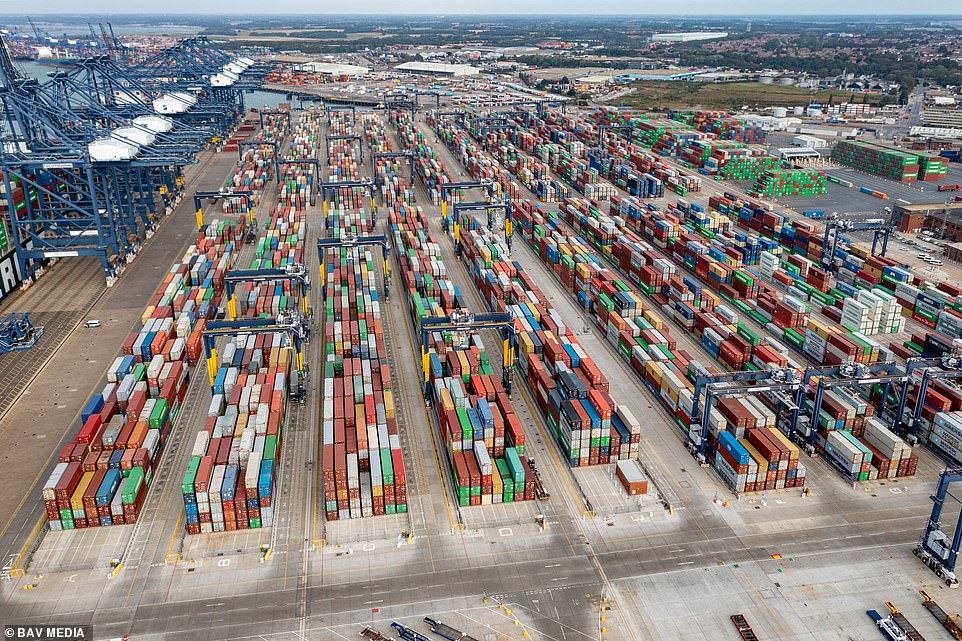 Containers are stacking up at Felixstowe, Britain’s biggest container port, in yet another pre-Christmas crisis emerging today 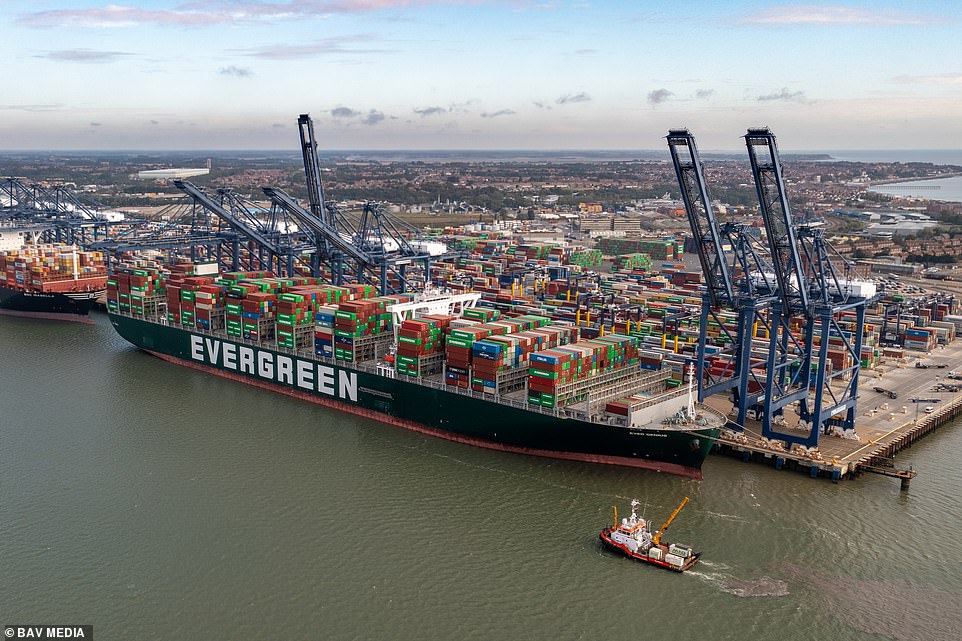 Maersk, the world’s largest shipping firm, says it is diverting bigger ships away from the UK due to the delays at the dockside 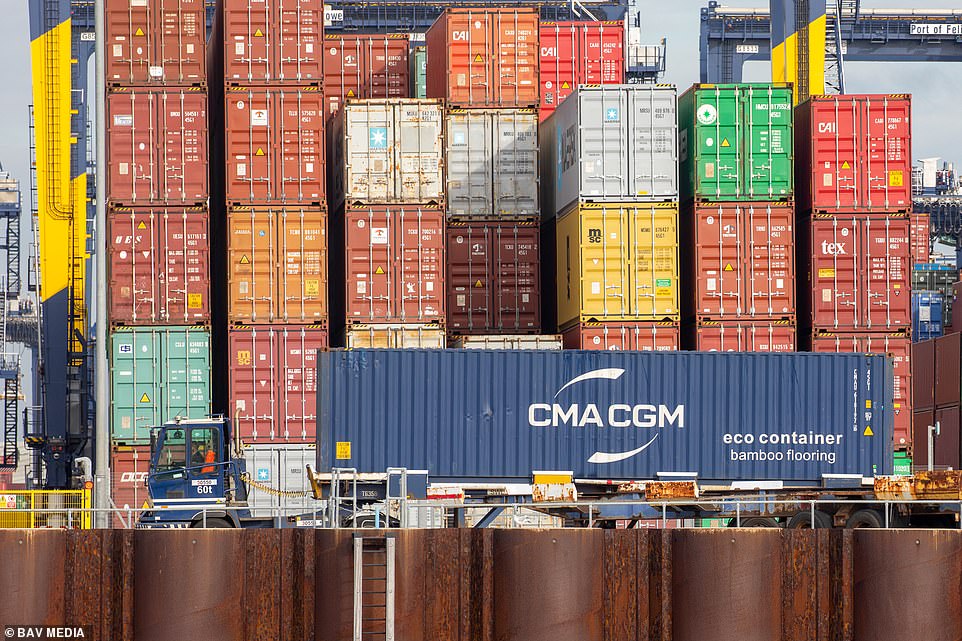 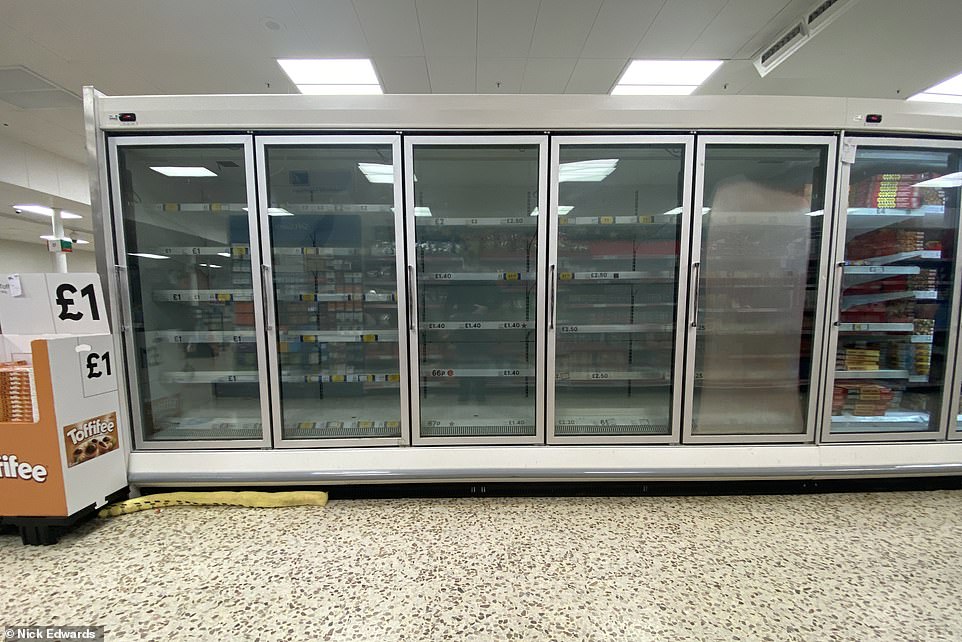 Consumers are seeing products in some parts of supermarkets missing, due in large part to issues with deliveries and a shortage of C02 used in thousands of products

Experts have warned that delays at Felixstowe are bound to cause more problems with the flow of goods into the UK, with just ten weeks to go until Christmas.

The near-ten day wait for containers to clear is nearly double the average for 2020. It comes despite the port – which handles 40 per cent of Britain’s container imports – only dealing with similar import volumes to 2019 with Brexit and the pandemic causing problems.

One logistics company told ITV News anonymously: “I’m fed up with this. Year on year this port never has enough staff to cope with high demand.

“Now we’re hitting another peak period and all that people are talking about again is shutdowns and gridlock. The port can never cope with high demand. How many times must this port seize up? These volumes were forecast, there have been many meetings about the run up to Christmas. Why are we on this position?”

Felixstowe is the route into Britain for much almost half of all of the UK’s imports, especially containers carrying goods from Asia via the Suez Canal. In the past year problems caused by the pandemic led to the delay of goods such as Apple AirPods and Sony PS5s as well as a plethora of items ordered from China by UK businesses.

Today the shortage of lorry drivers means it is having more containers arrive than are being collected, creating a backlog affecting major retailers including IKEA and major food companies including Nestle, the world’s largest food producer of coffee, baby food and chocolate.

An IKEA spokesman said: ‘Like many retailers, we are experiencing ongoing challenges with our supply chains.

‘As a result, we are experiencing low availability in some of our ranges. With Felixstowe nearing capacity, we have faced some challenges in returning containers to the port.’ 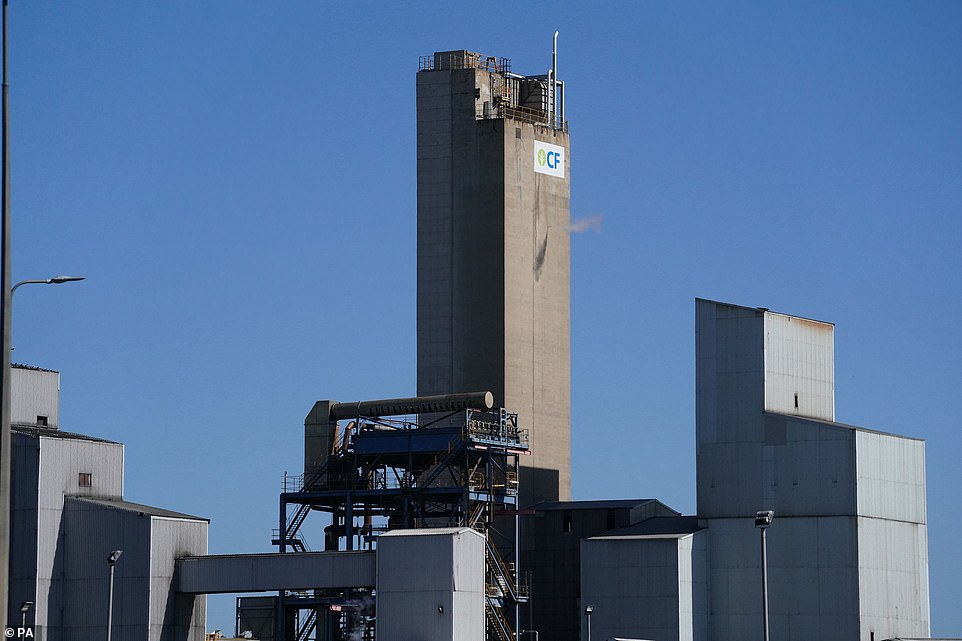 Spiking energy prices forced a major CO2 producer, CF Fertilisers, to shut down its two UK plants last month as the Government stepped in for three weeks to prop up the firm in a move that was expected to cost taxpayers tens of millions of pounds

Alex Veitch, of Logistics UK, said: ‘The current issues being experienced at Felixstowe port are partly due to the HGV driver shortage.’

Robert Keen, director general of The British International Freight Association, said: ‘BIFA has anecdotal evidence that the import dwell time for containers at some of UK’s main gateways for container shipping services has gone up from 5 to 9.7days over the past two weeks, but members are resigned to this being just part and parcel of the deep sea shipping world these days.’

Why is the price of coffee going up? How drought and frost in Brazil has hit Colombian farmers – forcing up the price of beans

World coffee prices have soared by 55 per cent this year, which is mainly due to bad weather in top producer Brazil that has hit supplies.

Drought and severe frost are estimated to have destroyed about 20 per cent of its coffee plants – and production of growers in Brazil has been reduced by around 25 per cent.

This situation has prompted coffee farmers in Colombia, which is the world’s number two producer, to default on sales clinched when prices were much lower in order to re-sell the coffee at higher rates.

This has seen Colombia fail to deliver up to one million bags of beans this year or nearly 10 per cent of the country’s crop – leaving exporters, traders and roasters facing steep losses.

However it is hoped that a price spike would be temporary, because the defaulting in Colombia is on coffee which ultimately exists and will weigh on markets once it is re-sold.

Colombian farmers say they will deliver the coffee later this year or next but buyers are unconvinced, with many opting to see losses now and write the purchases off rather than risk bigger loses.

Several global trade houses are said to be looking at losses of up to $10 million each on undelivered coffee.

A Port of Felixstowe spokesman said: ‘The pre-Christmas peak, combined with haulage shortages, congested inland terminals, poor vessel schedule reliability and the pandemic, has resulted in a build-up of containers at the port. The vast majority of import containers are cleared for collection within minutes of arriving.’

The backlog at Felixstowe comes as the spectre of bare shelves continued to haunt supermarkets.

Low stocks were in evidence at supermarkets including a Tesco in Chester, an Asda store in South East London and a Waitrose in Surrey.

Workers at the supermarkets said deliveries had ‘just not turned up’.

Meanwhile, there were warnings of price rises affecting staple items including baked beans and coffee.

Kraft Heinz CEO Miguel Patricio said yesterday the firm is ‘raising prices, where necessary’, blaming a lack of truck drivers in the UK and labour shortages and an increase in logistics costs in the US.

He added: ‘If costs keep going up we’re going to struggle. We will simply have to increase the price for customers.’

The price of Arabica coffee has jumped almost 73 per cent in the past year to levels not seen since 2014 after 20 per cent of coffee plants in Brazil – the world’s biggest bean exporter – were killed by drought and severe frost in the past year.

In Colombia, the third largest coffee-producing country in the world, farmers have refused to deliver bags of beans unless they receive higher prices.

The price of the gas, which is used to carbonate drinks, preserve food and stun animals for slaughter, is expected to rise fivefold after the Britain’s biggest manufacturer threatened to shut its factories.

Carbon dioxide is also used in surgical operations in hospitals, and as a coolant for nuclear power stations.

Ministers stepped in with a subsidy worth tens of millions to keep the supply going for three weeks and allow space for CF Fertiliser, which makes three-fifths of the UK’s supply, to negotiate with its customers.

It has now agreed higher prices that will guarantee supply until at least January.

But drinks companies and food producers may be forced to pass on the huge cost increase, thought to be from £200 to £1,000 per ton, to their consumers.

Industry bosses warned yesterday that three in five retailers expect to increase prices before Christmas in the face of rising costs for energy, ingredients and wages.

It comes after last month’s warning from Tesco chairman John Allan that food inflation could hit 5 per cent this year after a long period of falling prices.

Business Secretary Kwasi Kwarteng said the new deal between CF Fertiliser and its customers – industrial gas companies – was a ‘more sustainable solution’. He added: ‘Critical industries can have confidence in their supplies of CO2 over the coming months without further taxpayer support.’

The deal reflected ‘the vital importance of this material to everything from our nuclear industry to hospitals to the food and beverage industry’.

Last week Mr Kwarteng temporarily exempted parts of the CO2 industry from competition law so the deal could go through. Previously, ministers had warned that companies would have to accept a large rise in CO2 rates, with a possible fivefold increase.

Now CO2 customers will pay CF Fertilisers a set price until January, which will let the company continue to operate while global gas prices remain high. But with energy bills for its factories expected to rise further still, there is no guarantee that the firm can keep going beyond that date.

And a CF spokesman said the company expected the UK government and industrial gas customers to develop ‘robust alternative sources of CO2 as part of a long-term solution for meeting demand’.

Environment Secretary George Eustice said: ‘The Government has taken decisive action in these exceptional circumstances to allow a deal to be reached which will continue the supply of CO2.’

Gavin Partington, director general of the British Soft Drinks Association, said: ‘We welcome news of this arrangement, which provides some certainty of supply over the next few months. Although CO2 is a only a small percentage of total cost for most soft drinks producers, the significantly higher prices for supply only add to the economic pressures already facing manufacturers, including the shortage of HGV drivers.’

Andrew Opie, director of food and sustainability at the British Retail Consortium, added: ‘We welcome a deal to ensure that CO2 supplies are secure until after Christmas.

‘However, this is yet another example of cost pressures in the supply chain, along with rising transport costs, higher energy and commodity prices, and ongoing labour shortages.’