A remarkable piece of Stone Age rock art featuring a depiction of a bird has been discovered in an Italian cave, among other artwork dating back up to 14,000 years.

Archaeologists have been working in the Romanelli Cave in Apulia, Italy since 2016, but the first Stone Age artwork was found there over 100 years ago, in 1905.

The Palaeolithic artwork includes a rare depiction of a bird, as well as bovids and geometric signs, say experts from the University of Rome.

The images are part of an artistic tradition that stretched from the Iberian peninsula to France, but the new finds suggest this shared visual heritage spread even further.

Radiocarbon dating revealed that the cave was in use for longer than expected and the images may have built up over millennia. 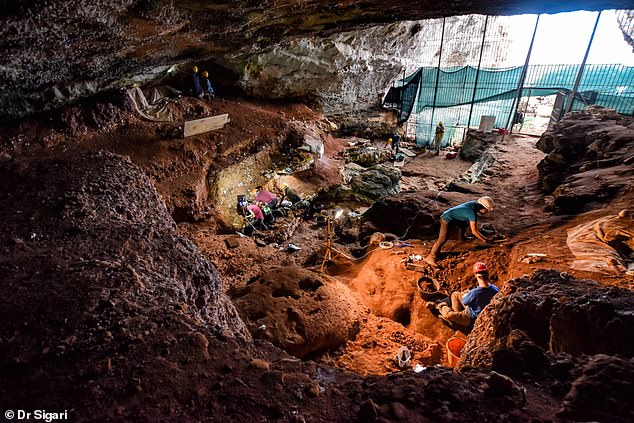 Fieldwork inside Romanelli Cave. The panels with art are in the top left. A remarkable piece of Stone Age rock art, featuring a depiction of a bird, has been discovered in an Italian cave among other artwork dating back up to 14,000 years 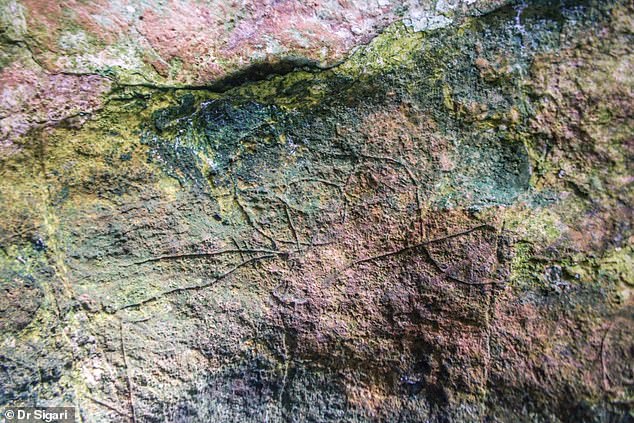 Among the carvings was an auk head, pictured, that the team says was a rare thing for the people of the time to depict 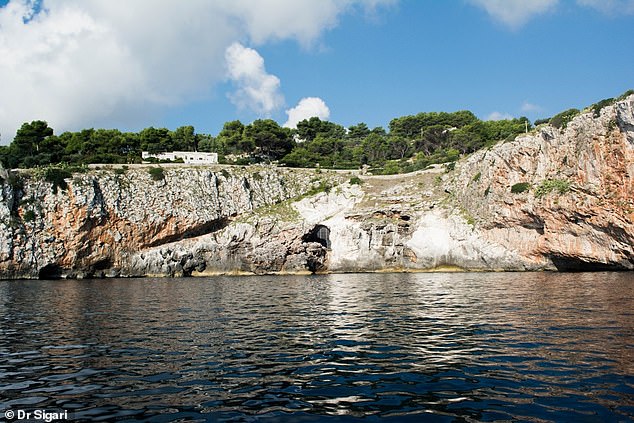 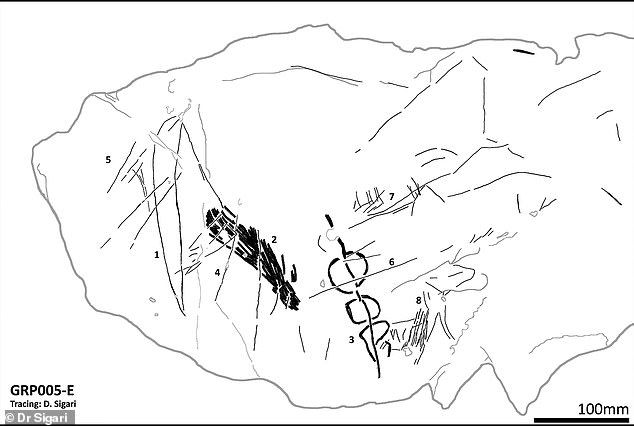 The team traced the panels to highlight the different markings, in this case showing different patterns, shapes and linear carvings

Romanelli cave, also known as Grotta Romanelli, has a history dating back to the Stone Age.

It was discovered in the 1870s, but due to being difficult to reach, the art wasn’t classified until 1905.

A further set of drawings were found more than a century later in 2021.

It is one of the Karstic caves in prehistoric Apulia, a UNESCO world heritage site.

Human occupation was tracked from the Mousterian Age, up to 160,000 years ago, and ran through to the Bronze Age about 5,000 years ago.

A multidisciplinary team of archaeologists, geologists and paleontologists in Italy made the amazing discovery within the cave, which is just 23ft above sea level.

While the cave was occupied during the Stone Age and re-discovered in 1874, difficulty accessing it meant it was not properly investigated for decades, with the first cave art only recorded in 1905.

‘The rock art was not fully documented and was only supposed to consist of a few geometric signs, like ovals and fusiform, and one bovid,’ said Dr Dario Sigari from the Università degli Studi di Ferrara.

As such, Dr Sigari and his team have been studying the cave since 2016. Their latest research, published in the journal Antiquity, reports the discovery of several previously unknown images there.

This newly identified artwork includes a bovid, geometric signs, patterns made by tracing fingers through moonmilk – a soft white material that builds up in limestone caves – and a rare depiction of a bird, likely an auk.

Although much of the artwork has deteriorated over time, the skill of the artists can still be seen.

Multiple tools were used to create the art depending on the surface being engraved and the bovid was carefully placed so that the shape of the rock would create a 3D effect. 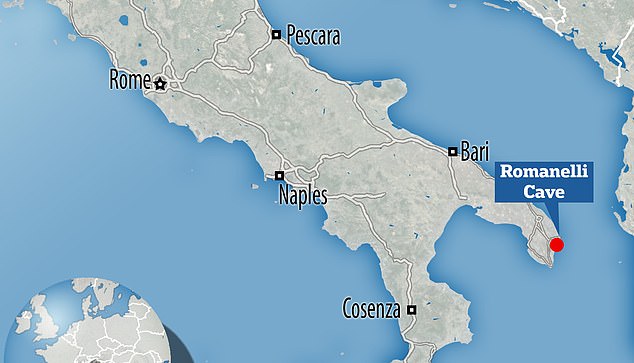 Archaeologists have been working in the Romanelli Cave in Apulia, Italy since 2016, but the first Stone Age artwork was found there over 100 years ago, in 1905 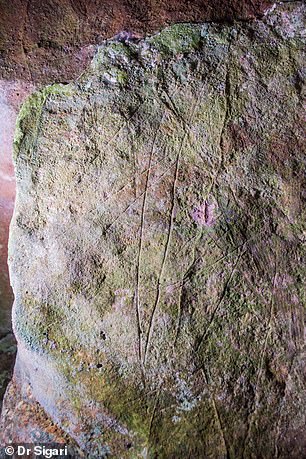 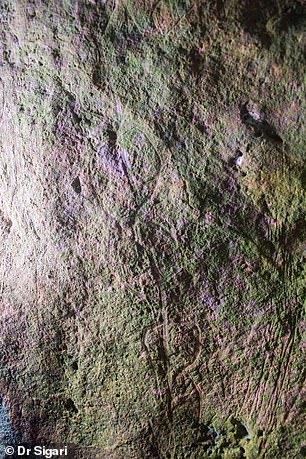 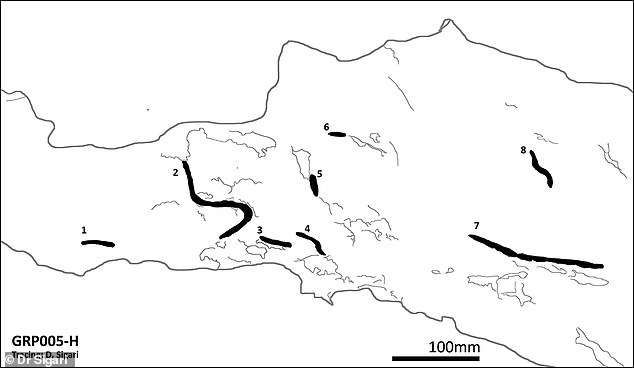 Thick, deep grooves with a V-shaped profile were produced by abrading the rock and can be seen in this tracing of the rockface

These new images, along with those previously identified in the cave, share many similarities with those seen in cave art from Italy, to France, and even as far as Spain or Azerbaijan, according to the researchers.

‘They further confirm the existence of a shared visual heritage across a wide part of Eurasia during the Late Upper Palaeolithic,’ said Dr Sigari.

He said the discovery raises ‘new questions about social dynamics and the spread of common iconographic motifs around the Mediterranean Basin.’

Sigari noted that there are some indications this heritage could extend as far as North Africa and the Caucasus, suggesting one large, wide-spread shared culture. 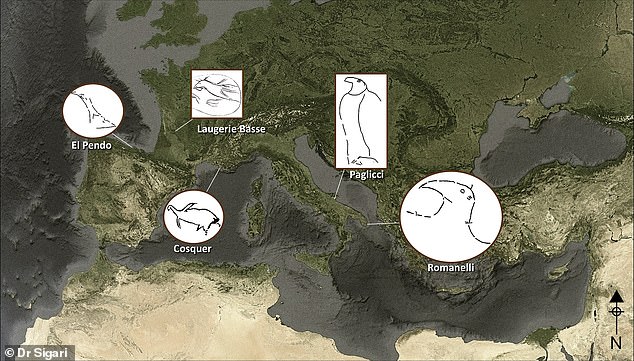 While rare, there are depictions of auk figures on cave walls throughout the region, from Italy through to France 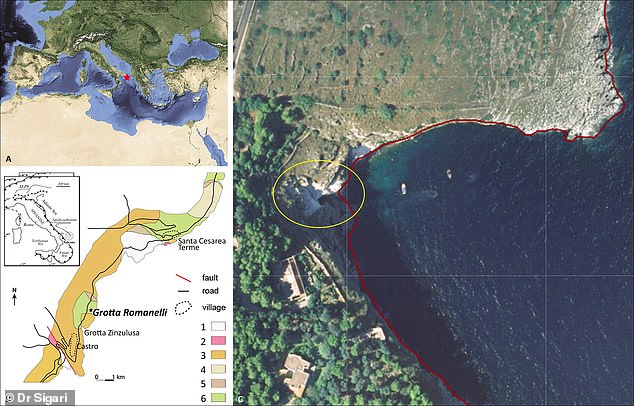 Located in the Mediterranean, the artwork in the cave is similar to that of the dominant culture throughout the region 10-14,000 years ago 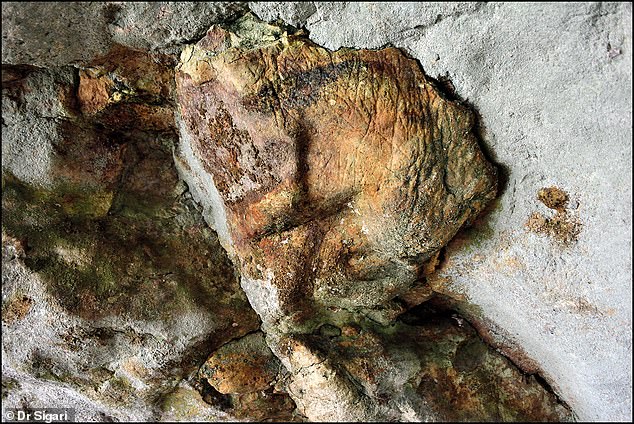 Here is a reticulate motif on the edge of the recess. These new images, along with those previously identified in the cave, share many similarities with those seen in cave art from Italy, to France, and even as far as Spain or Azerbaijan, according to the researchers

The artwork was traced to show the lines in finer detail, including bovine figures, shapes and even the auk like character

Dr Sigari and the team excavated the site, as well as look at the art, allowing them to study the habitation phases to confirm the cave was in use between 14,000-11,000-years-ago.

‘These new dates and the fact images are layered over each other, suggest the cave was in use for a longer period than previously supposed, with multiple episodes of art-making,’ said Dr Sigari, noting it could mean the art built up over millennia.

This was a time of change, as the glaciers from the peak of the last ice age began to retreat. It seems culture was also changing at this time, as sites like Romanelli show social dynamics were connecting people and ideas over a wide area.

The findings have been published in the journal Antiquity.

WHAT DO WE KNOW ABOUT THE HISTORY OF THE STONE AGE?

The Stone Age is a period in human prehistory distinguished by the original development of stone tools that covers more than 95 per cent of human technological prehistory.

It begins with the earliest known use of stone tools by hominins, ancient ancestors to humans, during the Old Stone Age – beginning around 3.3 million years ago.

Between roughly 400,000 and 200,000 years ago, the pace of innovation in stone technology began to accelerate very slightly, a period known as the Middle Stone Age.

By the beginning of this time, handaxes were made with exquisite craftsmanship. This eventually gave way to smaller, more diverse toolkits, with an emphasis on flake tools rather than larger core tools.

The Stone Age is a period in human prehistory distinguished by the original development of stone tools that covers more than 95 per cent of human technological prehistory. This image shows neolithic jadeitite axes from the Museum of Toulouse

During the Later Stone Age the pace of innovations rose and the level of craftsmanship increased.

Groups of Homo sapiens experimented with diverse raw materials, including bone, ivory, and antler, as well as stone.

The period, between 50,000 and 39,000 years ago, is also associated with the advent of modern human behaviour in Africa.

Different groups sought their own distinct cultural identity and adopted their own ways of making things.

Later Stone Age peoples and their technologies spread out of Africa over the next several thousand years.

Lake Michigan is heating up due to climate change, study reveals

Engineering: Robot with Venus flytraps for hands can trap objects in its jaw-like leaves