‘I think all our hearts are broken’: Brad Pitt muses on life after divorce as ‘all or nothing’ star says he’s given up smoking and drinking since splitting with Angelina Jolie

Brad Pitt has given a bleak assessment of the human condition as he moves on from the collapse of his five year marriage to actress Angelina Jolie.

The Hollywood star has embraced a life of abstinence that began shortly after their divorce was finalised in 2016, but his newfound positivity is tempered by the belief that all of us experience wrenching heartache at some point in our lives.

Speaking to the latest edition of British GQ, Pitt, 58, insisted emotional turmoil and deep sadness are an inevitable part of growth.

Opening up: Brad Pitt has given a bleak assessment of the human condition as he moves on from the collapse of his five year marriage to actress Angelina Jolie

‘I think all our hearts are broken,’ he said. ‘I always felt very alone in my life, alone growing up as a kid, alone even out here, and it’s really not till recently that I have had a greater embrace of my friends and family.

‘What’s that line, it was either Rilke or Einstein, believe it or not, but it was something about when you can walk with the paradox, when you carry real pain and real joy simultaneously, this is maturity, this is growth.’

Despite the overriding sense of isolation, Pitt admits he’s found community and friendship through his decision to give up alcohol in 2016. 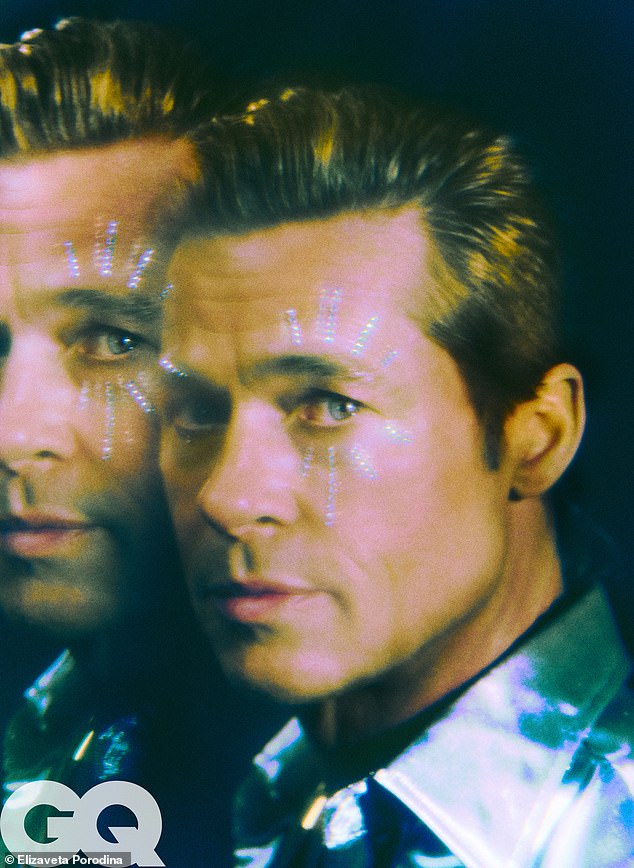 Reflective: Speaking to the latest edition of GQ , Pitt, 58, insisted emotional turmoil and deep sadness are an inevitable part of growth

Newly divorced, the actor spent 18-months attending regular Alcoholics Anonymous meetings while embracing the group’s core principles of abstinence from all mind altering substances, and honesty regarding the nature of addiction.

‘I had a really cool men’s group here that was really private and selective, so it was safe,’ he explained. ‘Because I’d seen things of other people who had been recorded while they were spilling their guts, and that’s just atrocious to me.’

The actor, a lifelong smoker, also made the decision to cut cigarettes out of his life, opting instead to substitute tobacco with nicotine flavoured gum.

‘I don’t have that ability to do just one or two a day,’ he said of his past smoking habit. ‘It’s not in my makeup. I’m all in. And I’m going to drive into the ground. I’ve lost my privileges.’

Rachel Brosnahan glows in a blue dress as she hails a taxi while filming The Marvelous Mrs. Maisel