EDEN CONFIDENTIAL: Start of the dog days for hairy Hugh Laurie as House star sports unkempt hair and a bushy beard on walk

When starring as Dr Gregory House on U.S. show House, Hugh Laurie’s rumoured fee of £250,000 per episode made him the highest paid actor on the small screen.

Yet you’d never know that to look at the dishevelled 63-year-old, who — with bushy beard, unkempt hair, creased clothing, and sporting scratches on both his arms and legs.

He appeared to be channelling his inner Robinson Crusoe while taking his dog for a walk in North London. 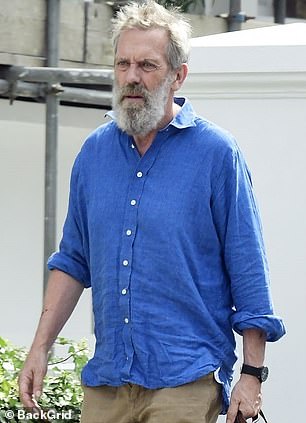 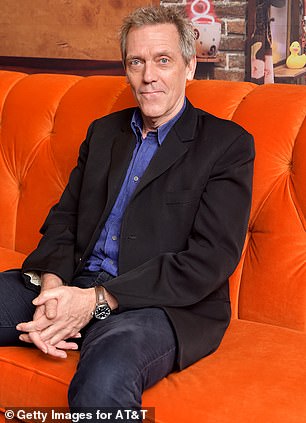 The Cambridge-educated comedian previously spoke about the difficulties of being based in Los Angeles for nine months at a time to film the Fox show, while his wife, three children and furry friends remained in the UK.

Having taken on the role — which earned him two Golden Globes and six Emmy nominations — in 2004, Hugh eventually hung up his doctor’s jacket in 2012.

After moving back to the UK, one of the things he said he was most looking forward to doing was ‘walking the dog’ again. 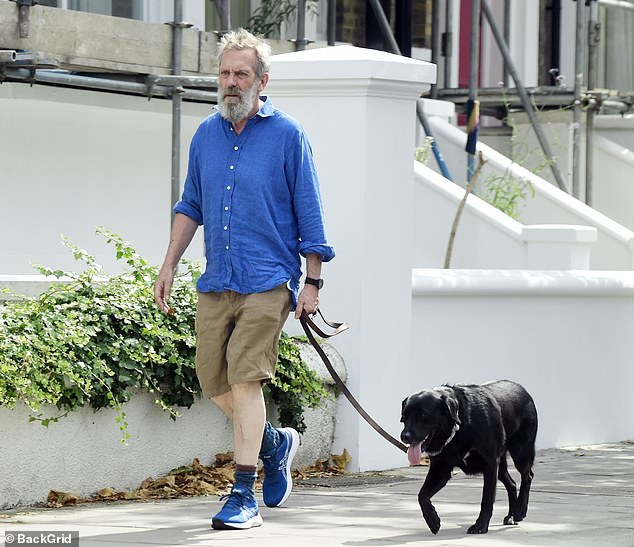 Boy in blue: Hugh cut a low-key figure as he walked his pooch around town

The outing comes after the release of his new three-part series Why Didn’t They Ask Evans?

The captivating murder-mystery, which boasts an all-star cast, is based on the iconic 1934 novel of the same name by Agatha Christie.

It follows vicar’s son Bobby Jones, played by Will Poulter and his adventurous friend, socialite Lady Frances Derwent, as they dig deep into a murder.

It also star big names such as Emma Thompson and Jim Broadbent who play aristocrats Lord and Lady Marcham, the parents of Lady Frances.

Hugh is starring in the miniseries as psychologist Dr James Nicholson, as well as directing the show.

He said: ‘I loved this book as a nipper and still do. The hairs on the back of my neck haven’t properly settled down from the first time I grasped the beauty of the essential mystery.

‘Since then, I have fallen deeper and deeper in love with the characters, and feel immensely honoured to have been given the chance to retell their story in this form.’

‘I will wear a tie on set, and give it everything I have.’

Bill Roache, 88, forced to take time off the soap after testing positive for Covid