Coleen Rooney looked flawless as she posed alongside her pals during an Ibiza getaway with her husband Wayne, in shots posted to Instagram on Sunday.

The 36-year-old caught the eye in a pink scoop neck mini dress with an exposed midriff while flashing her bronzed legs and clutching a dazzling gold handbag.

Joining her were fellow WAGs Lisa Carrick and Lucy Bruce, whose respective husbands Alex and Michael beamed over a glass of white wine in another snap. 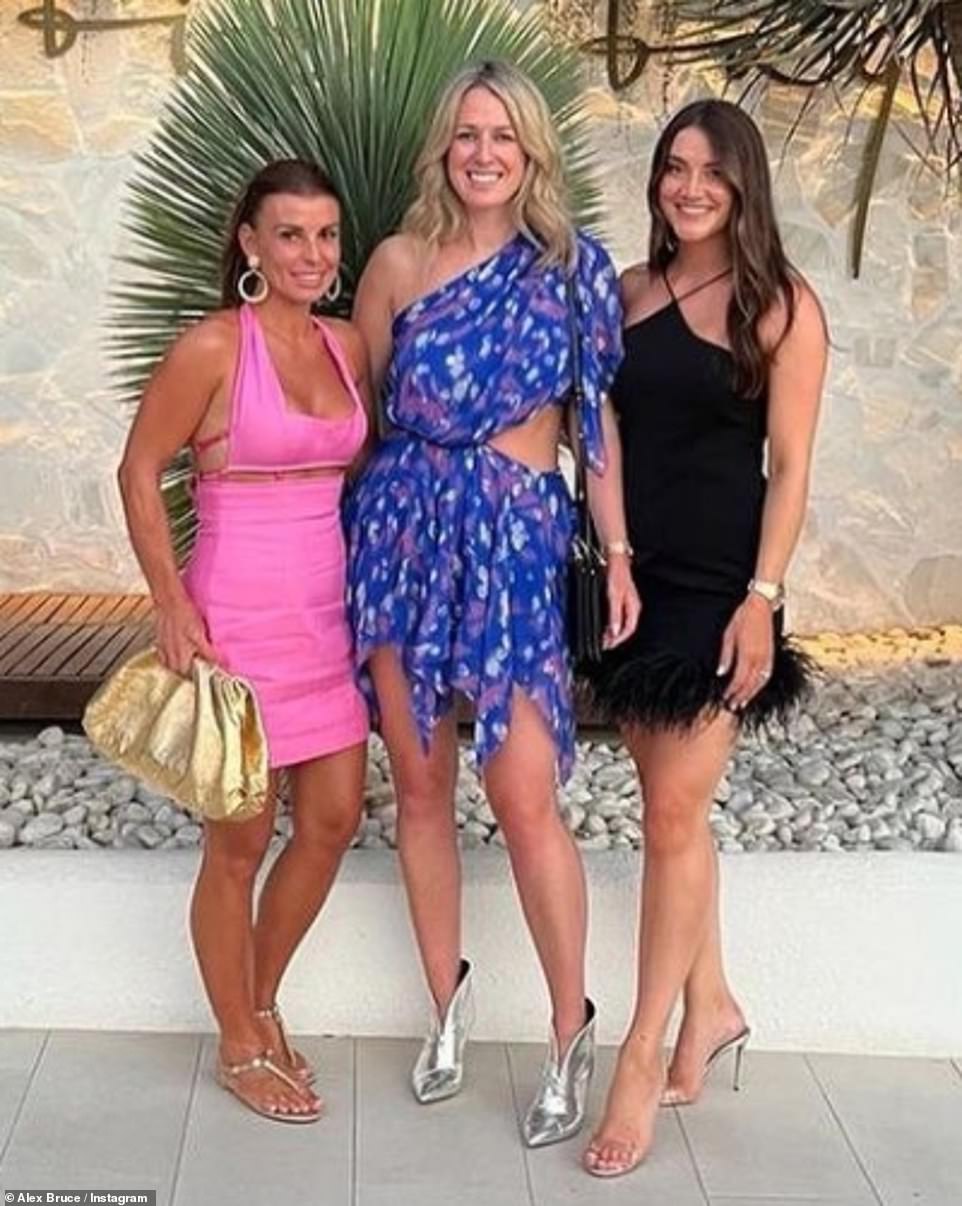 Lisa exposed her toned pins in a blue sarong dress while adding inches to her enviable frame with a pair of sparkling silver heels while Lucy sent temperatures soaring in a black feathered mini dress.

Meanwhile, their footballer husbands Alex and Michael wore matching white shirts while enjoying a glass of white wine at the dinner table.

Macclesfield defensive midfielder Alex cosied up to his stunning wife Lucy for a selfie before joining Wayne and former caretaker manager of Manchester United Michael as they sipped from delicious cocktails.

The holidaymaker beamed for the camera over lunch, with a picturesque view of the sea behind them. 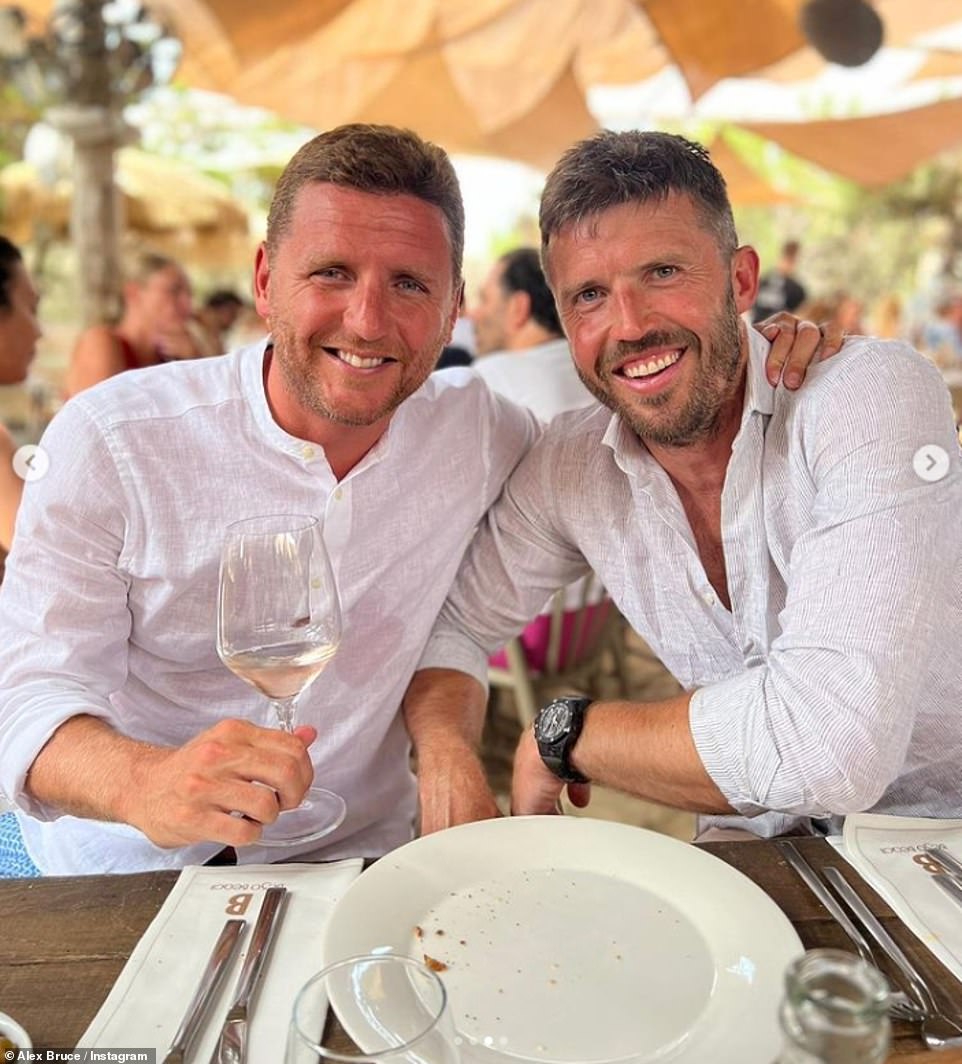 Friends: Their respective husbands Alex (left) and Michael (right) beamed over a glass of white wine in another snap 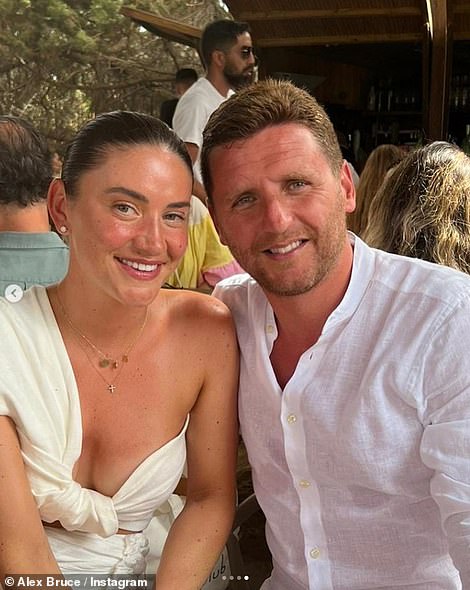 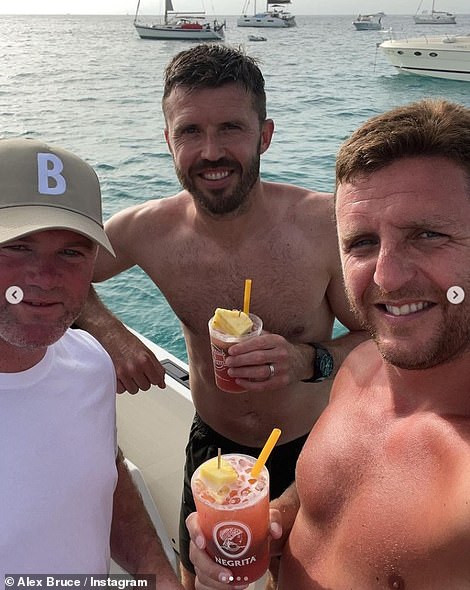 Happy times: Macclesfield defensive midfielder Alex (right) cosied up to his stunning wife Lucy for a selfie before joining Wayne and former caretaker manager of Manchester United Michael (centre) as they sipped from delicious cocktails

Wayne and Coleen are enjoying another sun-soaked holiday as they await the verdict for the ‘Wagatha Christie’ libel battle.

Just weeks after jetting back from Dubai, the couple celebrated Father’s Day on Sunday in Ibiza, heading out on the town with footballers Alex and Michael and their partners.

The couple only recently jetted home to England from a family holiday in Dubai with their sons and their parents. 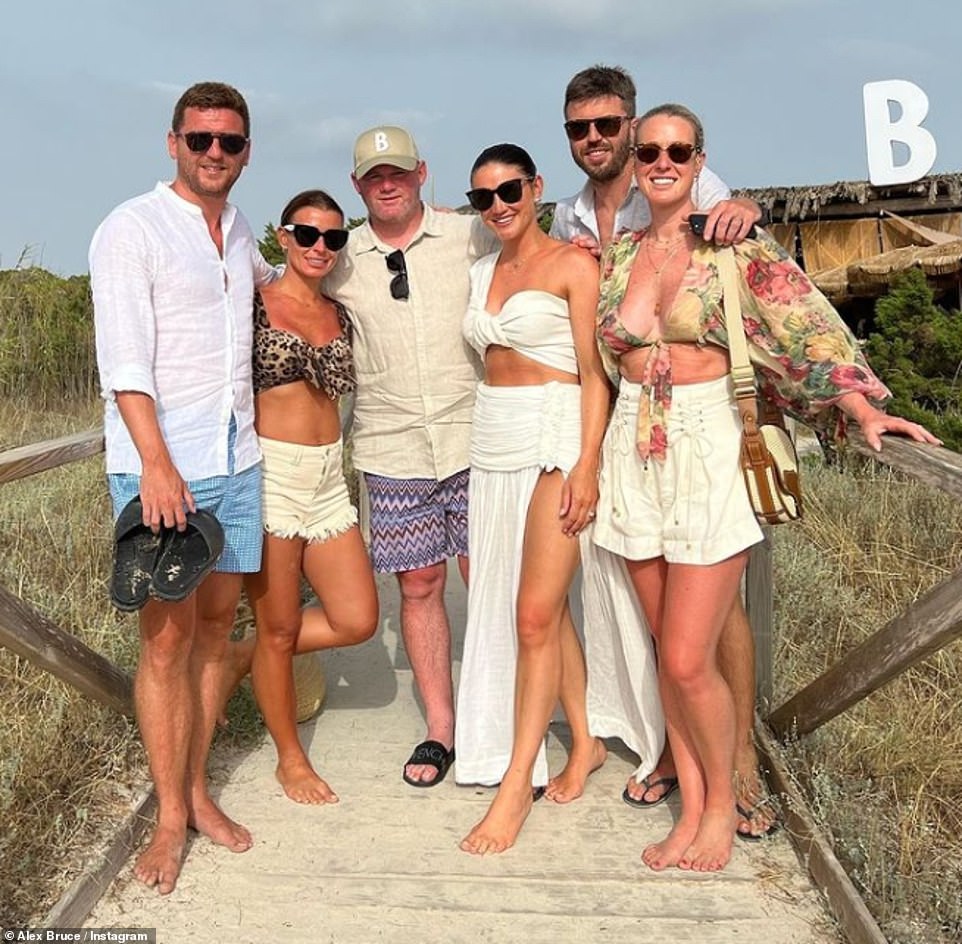 Gang: Alex, Coleen, Wayne, Lucy, Michael and his wife Lisa (L-R) appeared to have soaked up the sun 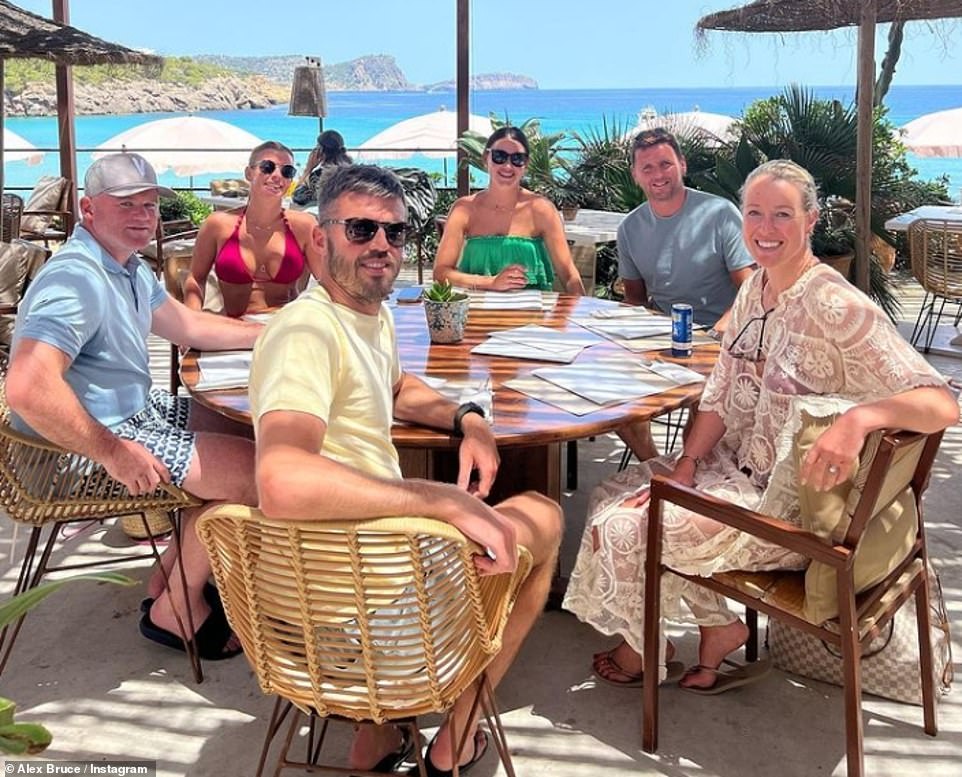 In their element: The holidaymaker beamed for the camera over lunch, with a picturesque view of the sea behind them

They flew out from Manchester last month after skipping the last day of the so-called Wagatha Christie libel trial against Rebekah Vardy, which gripped Britain.

Coleen and Wayne had spent seven days in London’s High Court as she rebutted claims that she had libelled Rebekah, the wife of Leicester City striker Jamie Vardy.

The mother-of-four had accused Rebekah, 40, of leaking stories to The Sun about her family after entrapping her in a notorious ‘sting operation’ on Instagram.

Coleen famously revealed in October 2019 how she planted fake stories on her personal Instagram account and had changed her settings so that the posts could only be seen by Rebekah’s account. 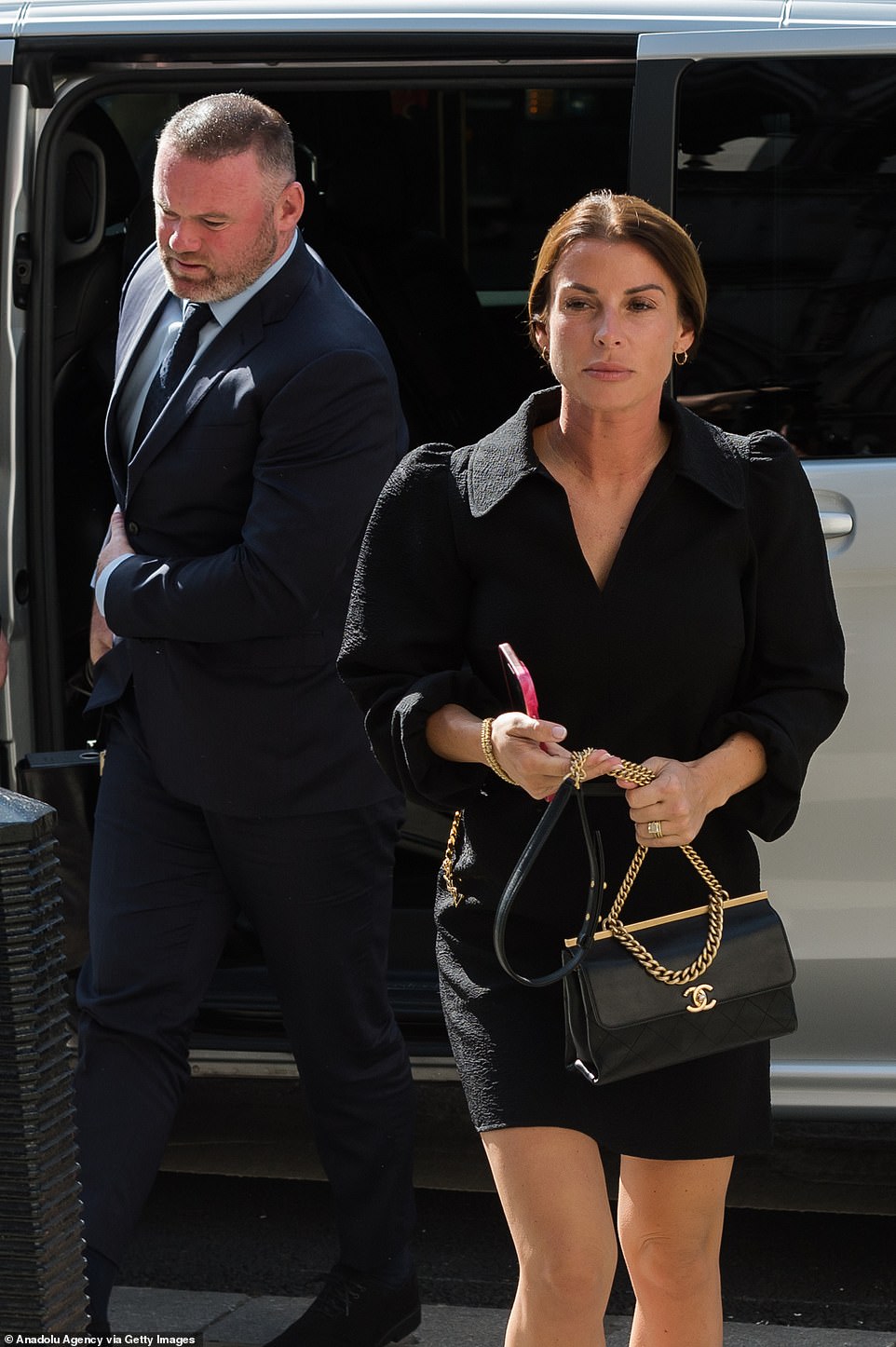 Heading off: The Rooneys flew out from Manchester after skipping the last day of the so-called Wagatha Christie libel trial which gripped Britain

Each of the bogus stories then found their way into The Sun newspaper, prompting Coleen to suggest that Rebekah’s account was the source of the leaks.

Coleen had claimed that her actions were a ‘last resort’ after she came to the conclusion someone was leaking information about her to The Sun.

She defended herself against the libel claims in court by insisting that her allegations against Rebekah were the truth.

Rebekah claimed in turn that Coleen’s post, which was published while she was pregnant, cost her a book deal and an endorsement for placenta capsules, while also acting as a lightning rod for people to abuse her on social media. 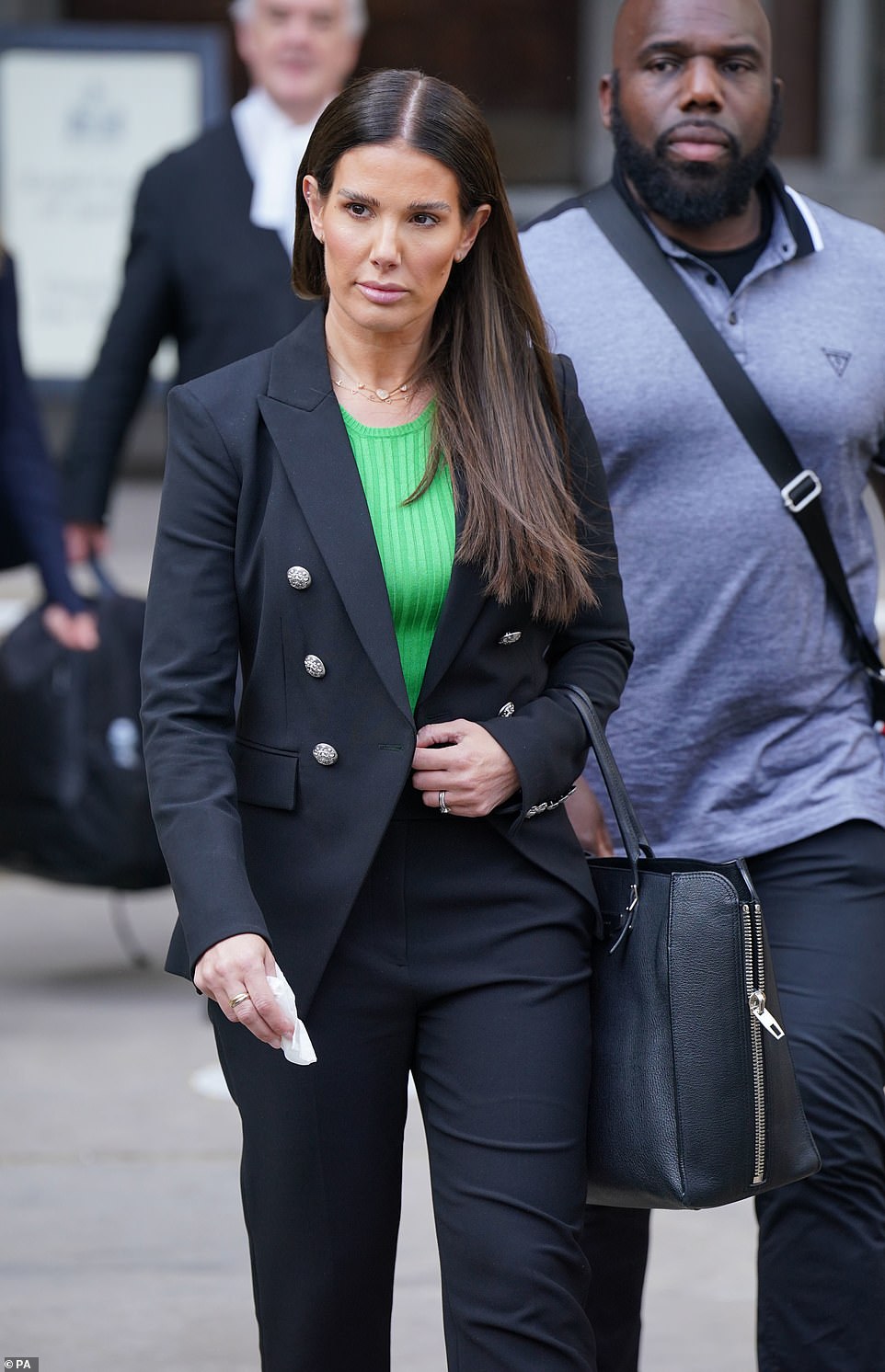 Tactical: Coleen famously revealed in October 2019 how she planted fake stories on Rebekah Vardy’s (pictured) Instagram and changed her settings so the posts could only be seen by her

Zooey Deschanel shocks her fans by posting a rare photo without her bangs: ‘Proof I have a forehead’

Anthea Turner, 61, shares her secrets to staying young and encourages going out of your comfort zone