James Argent has revealed he is on the lookout for love after his dramatic 13 stone weight loss, but won’t be reconciling with Lydia Bright or Gemma Collins.

The pair split in 2016 after a tumultuous on and off relationship when Lydia, 30, reportedly came home to find recovering drug addict James, 34, ‘out of it.’

Speaking The Mirror about his relationship with his fellow TOWIE star, Arg said it’s ‘frustrating’ that girls won’t approach him because they believe he and Lydia have rekindled their romance, adding that they’ve decided to remain close friends. 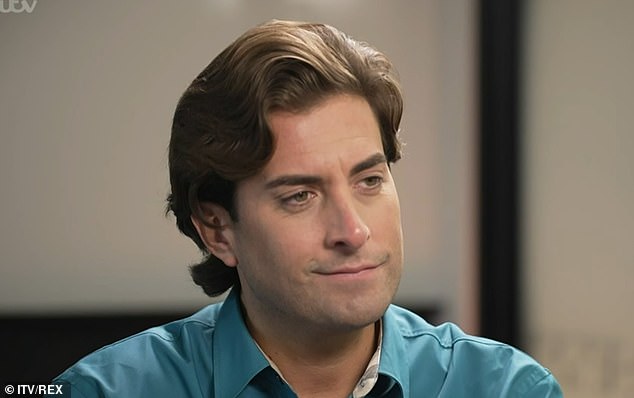 Just friends: James Argent, 34, has vehemently denied reunion rumours with Lydia Bright, 30, and branded her one of his ‘closest friends’

Lydia has been single following the end of her relationship with Lee Cronin, who’s her daughter Loretta’s father.

Arg explained: ‘We want to be in each other’s lives forever. She’s one of my closest friends. We care about each other and respect each other but we think anything else than staying friends would jeopardise that.

‘I want to be able to see Lydia when I’m not having a good day as she’s somebody I turn to for help, but we can’t do that at the minute because we get pictured and everyone says, ”they’re back together.” 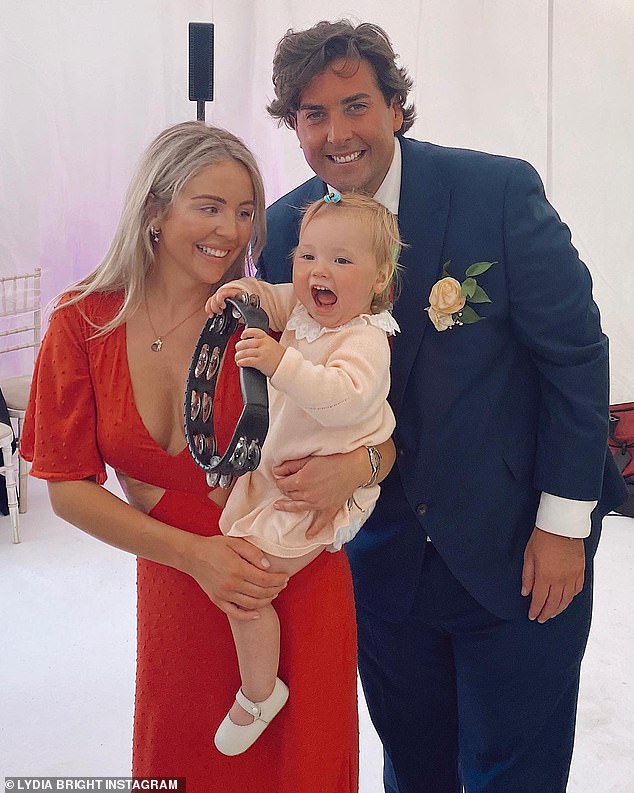 History: The pair split for good back in 2016 after a tumultuous on and off relationship and  Lydia, 30, is now mother to daughter Loretta, 22 months, with ex Lee Cronin

‘I have girls who think ”aren’t you with Lydia” so they don’t bother with me. It’s frustrating.’

Arg added that he feels he can turn to Lydia with his problems, but also can confide in her mum – who sends him inspirational quotes in the morning to help him with his recovery.

And while the star said he is still on the lookout for his dream woman, there is no chance of a reconciliation with his ex Gemma, after they ended their relationship for good in 2020.

He said he is happy for her new engagement with beau Rami Hawash, after getting to know him during the early years of TOWIE, and he still looks to her for advice on his designer wardrobe. 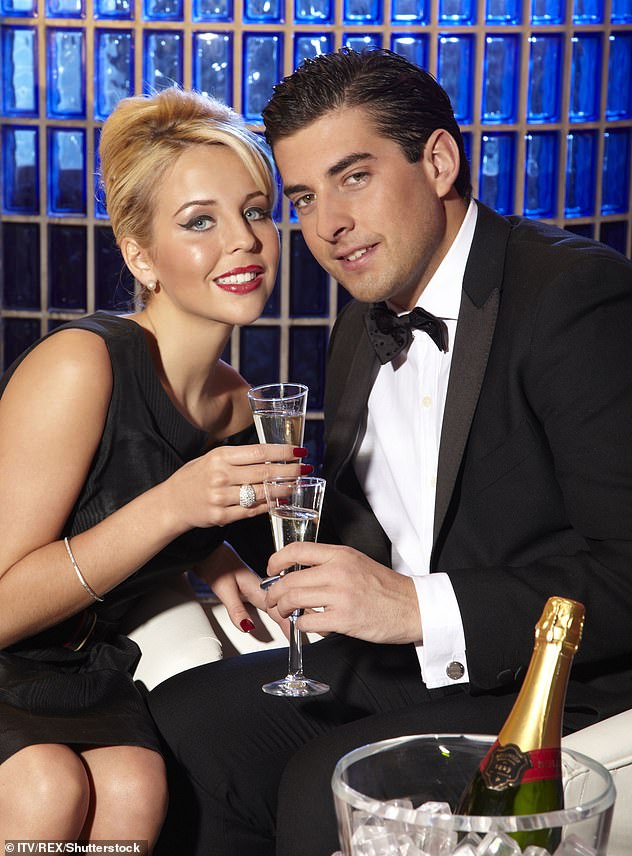 In the past: Arg spoke about his relationship with his fellow TOWIE star, saying that rumours ruin the potential for the former couple moving on; pictured in 2011

Arg was recently spotted at the PDC Darts World Championship holding up a board which read ‘GC call off the engagement’ on it, but he clarified that it was all in good humour.

He said of this: ‘It was just lads’ banter. I know for a fact Gemma wasn’t offended – she saw the funny side. I also got to know Rami well in the early days of filming TOWIE so I’m really pleased for her.’

James also revealed that his 13 stone weight loss has spurred him on to consider reality shows such as I’m A Celebrity and Strictly Come Dancing. 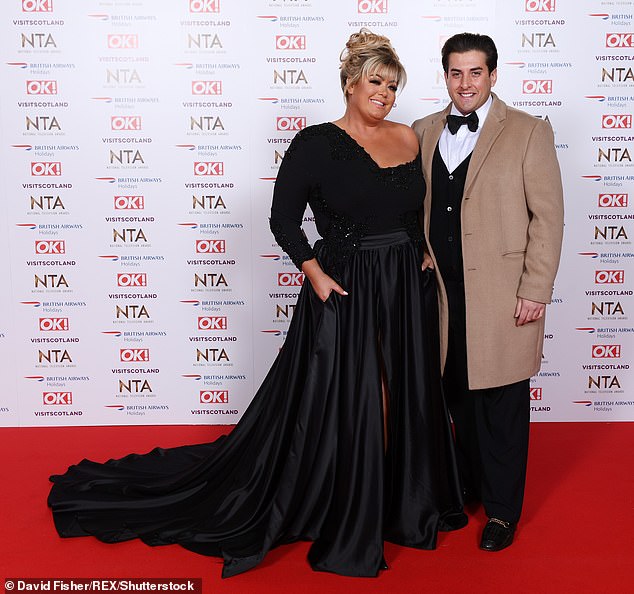 Ex-files: James also had a long term romance with another co-star Gemma Collins, and has expressed how happy he is for her new ‘engagement’ with Rami Hawash; pictured in 2019 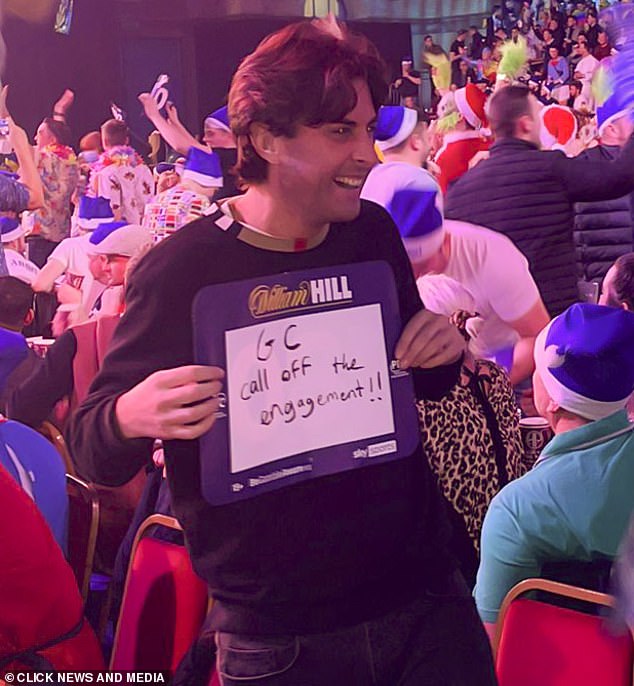 Having a laugh: Arg was recently spotted at the darts holding up a board which read ‘GC call off the engagement’ on it – but he insisted it was just a joke

During Tuesday’s episode of Loose Women, Arg explored the rise in male eating disorders by interviewing an expert, two case studies and his mum, Patricia Argent.

Arg, who told viewers one and a half million people in the UK are struggling with an eating disorder and a quarter of those are men, also admitted he was one of them.

He decided to overhaul his lifestyle after battling depression and cocaine addiction.

After bingeing on food following a rehab stint, Arg decided to get a gastric band surgery last April.

Wow: James also revealed that his 13 stone weight loss has spurred him on to consider reality shows such as I’m A Celebrity and Strictly Come Dancing (pictured right, days before gastric band surgery in April 2021)

The procedure sparked him to change his diet for the better and workout regularly, boxing, swimming and going to the gym five times a week.

During the VT, James spoke to his mum, Patricia, and asked: ‘When did you notice there was something not right with me?’

She replied: ‘Lockdown is when it started to creep up on you. You seemed to be putting on weight every week and I noticed you weren’t moving as much as you could have been, and you just didn’t seem happy in yourself.’ 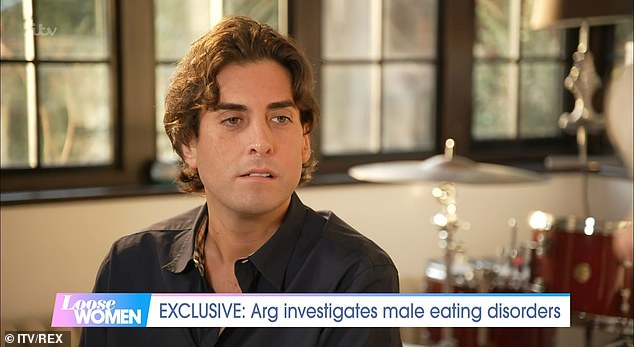 Went through it: During Tuesday’s episode of Loose Women, Arg explored the rise in male eating disorders by interviewing an expert, two case studies and his mum, Patricia Argent

Ashes: Mark Wood is after 'wins and wickets' with England ahead of final Australia Test