She still had two days left to go, but Jennifer Lawrence was already dressed for summer when she was spotted out in Los Angeles on Sunday.

The 31-year-old Oscar winner sported a lovely lavender sun dress as she strolled through the city after finishing up a spa session.

The new mother, who confirmed in May that she has welcomed her first child with her husband Cooke Maroney, also covered up her colorful dress with a cozy patterned cardigan. 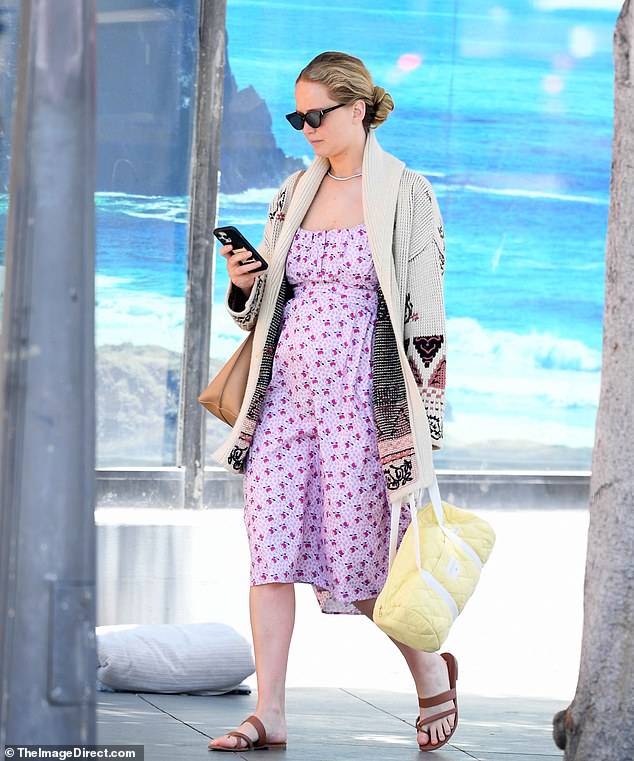 Summer beauty: Jennifer Lawrence, 31, looked radiant in a lavender sun dress as she took a stroll after a spa session in Los Angeles on Sunday

Jennifer’s pale purple dress was decorated with apple or berry fruit designs and showed off her trim legs.

She blocked out the breeze with her cream-colored sweater, which had brown-and-black designs decorating the sleeves and hem.

The Silver Linings Playbook star carried a small pale yellow quilted duffel bag in her left hand, and she also wore a tan leather bag slung over her other shoulder.

She matched it with her brown sandals, and she blocked out the sun with a set of black cat-eye sunglasses while wearing her dirty blond hair tied back in a bun. 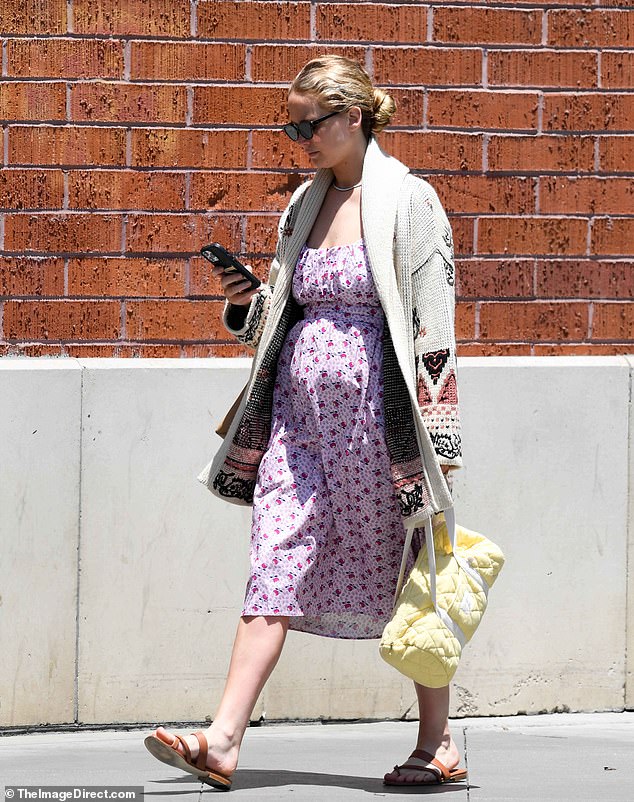 Layers: Jennifer’s dress was decorated with fruit designs, and she covered it with a cream-colored cardigan, plus brown sandals 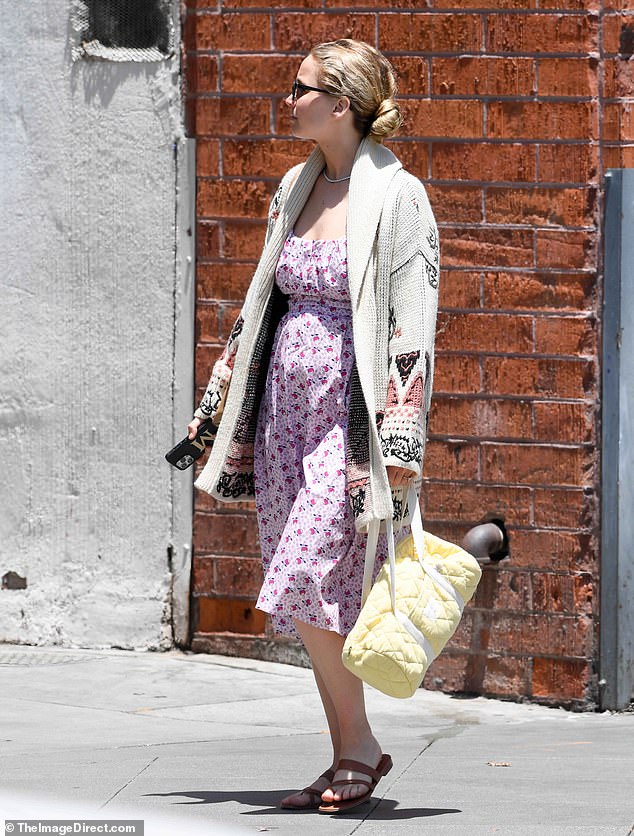 Jennifer appears to be getting back into the swing of things after welcoming her first child with Cooke, whom she married in 2019 after dating since the previous year.

Although she has shared no details about the baby, her friend Ellen DeGeneres, appeared to reveal the child’s sex during Jennifer’s call-in appearance.

Ellen, 64, referred to the baby — whose name also has not been revealed yet — as ‘him.

During the chat, the comedian explained how the Hunger Games star now lives in the house she used to live in when she began hosting her talk show, which gave her a glimpse into Jennifer’s new motherhood.

‘By the way, I do hear you sometimes talking to him, and it’s really cute,’ she added, indicating that the actress shared a baby boy with Cooke . 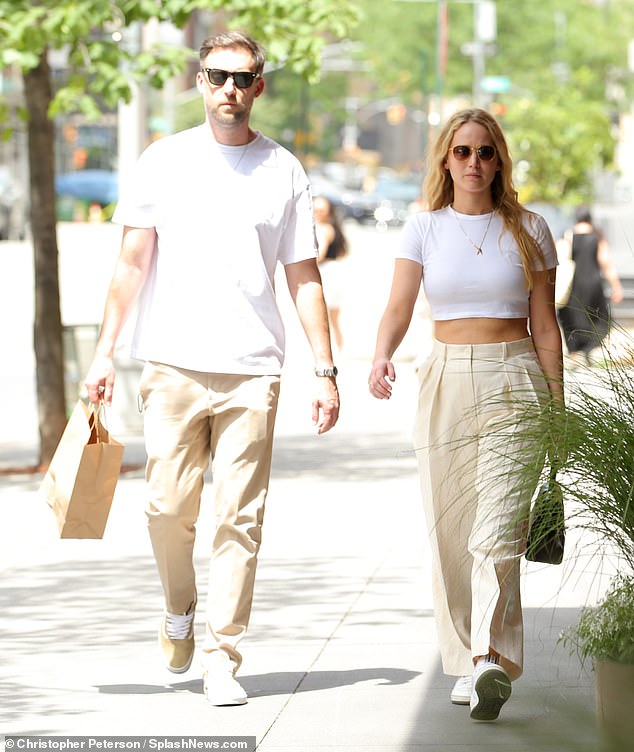 New mom: Jennifer appears to be getting back into the swing of things after confirming in May that she welcomed her first child with husband Cooke Maroney, whom she married in 2019 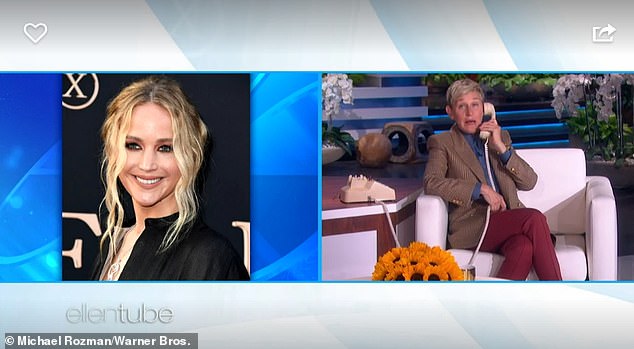 It’s a boy: Last month, Ellen DeGeneres apparently revealed that Jen had recently given birth to a baby boy during the actress’ final appearance on her talk show

Back in November, Jennifer spoke to Vanity Fair about her intense desire to protect her son’s privacy, even if she has given up a great deal of hers in exchange for becoming an A-list actor.

‘If I was at a dinner party, and somebody was like, “Oh, my God, you’re expecting a baby,” I wouldn’t be like, “God, I can’t talk about that. Get away from me, you psycho!”‘ she mused, adding that ‘Every instinct in my body wants to protect their privacy for the rest of their lives, as much as I can.’

In order to protect her child’s privacy, she thought it was essential to keep them separate from her acting and any publicity associated with it.

‘I don’t want anyone to feel welcome into their existence. And I feel like that just starts with not including them in this part of my work,’ she said. 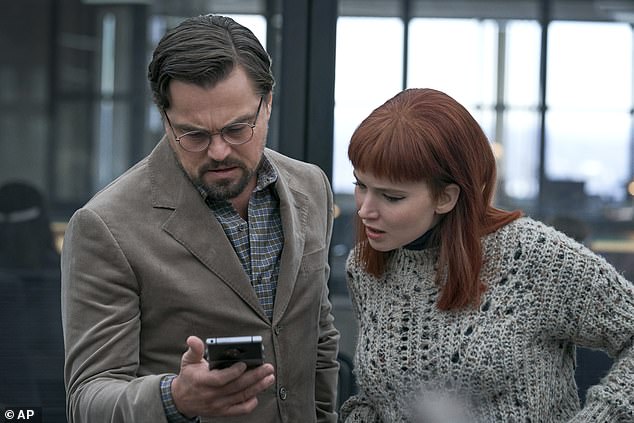 Out of the spotlight: In November, Jennifer told Vanity Fair she wants to keep her son away from her acting career to protect his privacy; seen with Leonardo DiCaprio in Don’t Look Up