Joan Collins, Holly Willoughby, Gemma Collins and Abbey Clancy have led the stars who’ve already put their Christmas trees up ahead of December.

Actress Dame Joan, 88, was certainly getting into the festive spirit on Monday as she decorated her home including a huge fir adorned with gorgeous white ornaments and an angel on top.

She was joined by her close friend and stylist Rene Horsch as she donned a casual ensemble to pose beside the finished product, captioning her poet: ‘It’s never too early to put up the #christmastree!’ 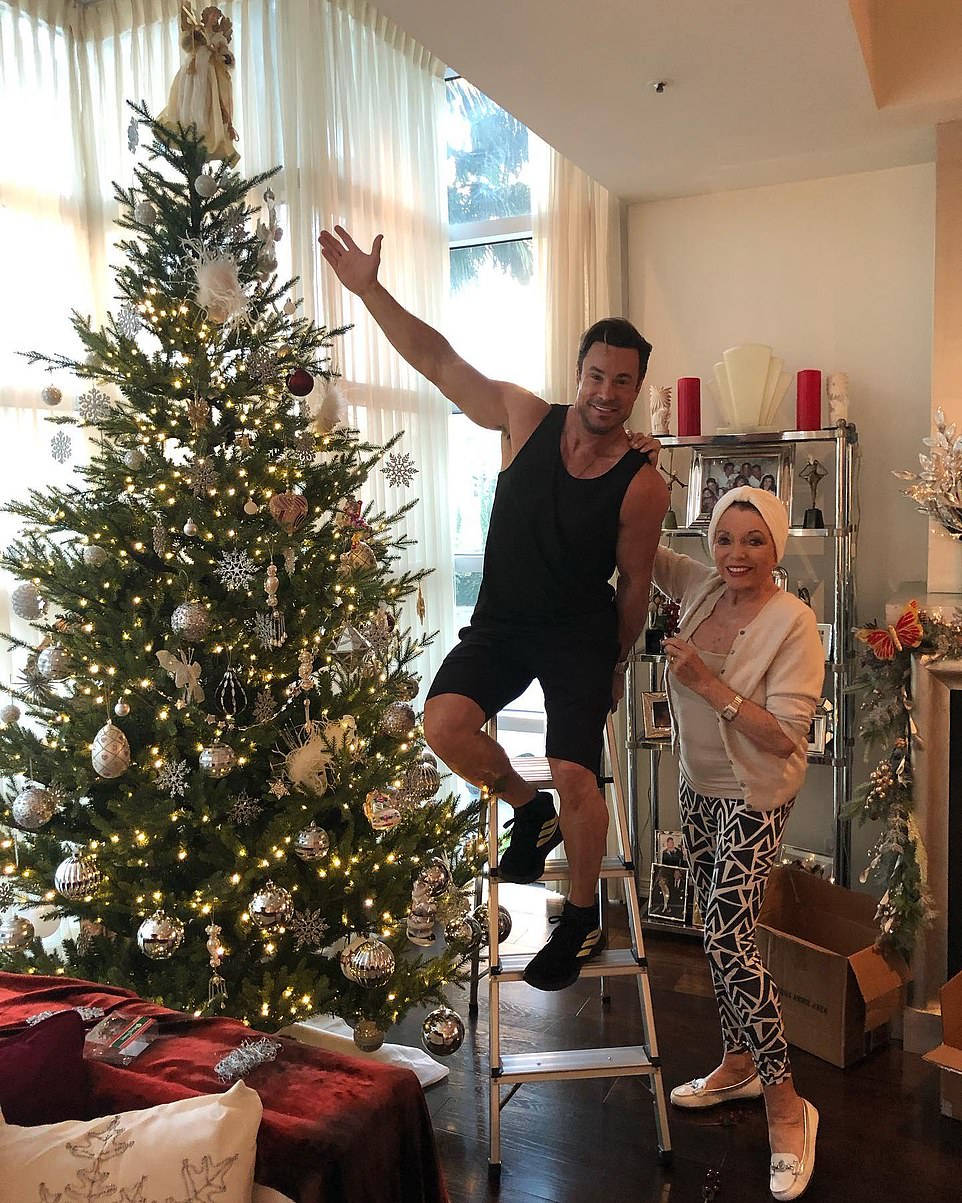 Meanwhile former TOWIE star Gemma Collins, 40, was also busy on the weekend, transforming her home into a winter wonderland.

Gemma has decorated much of her garden with fairy lights while she has covered a seating area in snowflake lights.

She also filmed a trio of décor specialists erecting a giant green tree at her £1.35m home, complete with an assemblage of white baubles and tinsel. 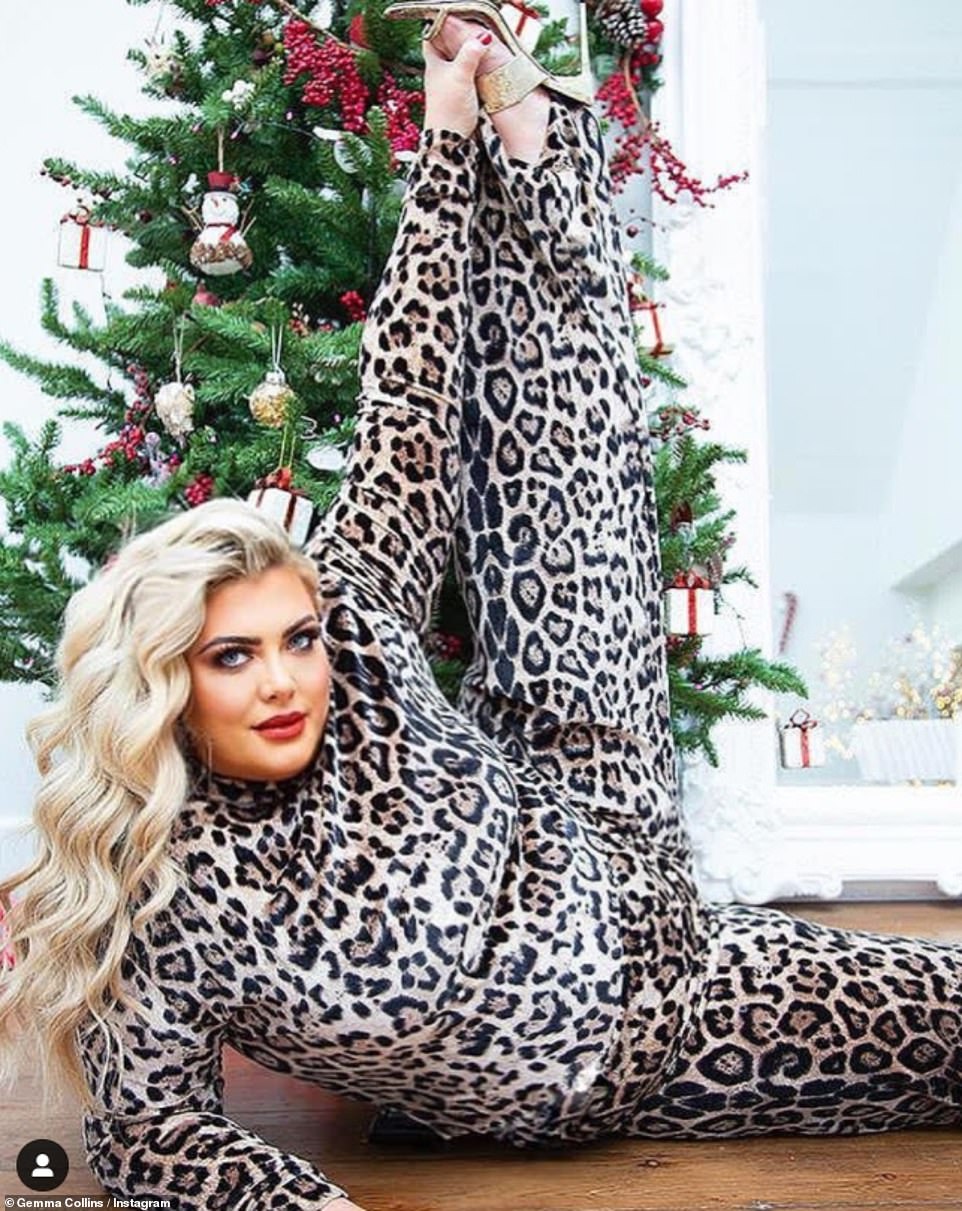 Festive: Gemma has also given fans a behind the scenes look at her lavish Essex mansion’s Christmas transformation 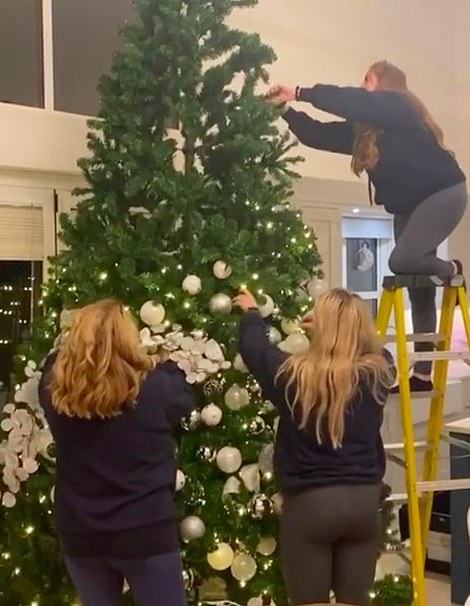 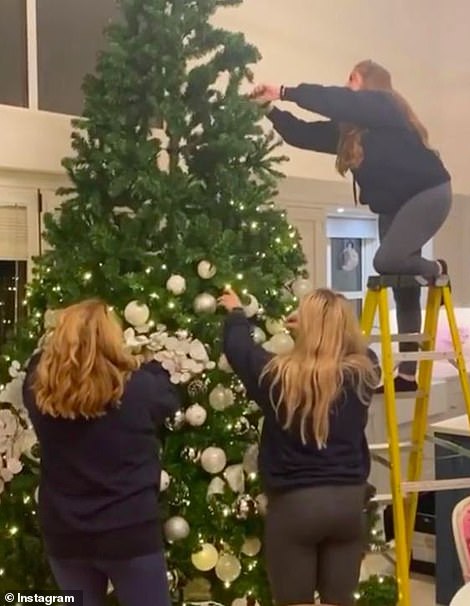 Busy: She also filmed a trio of décor specialists erecting a giant green tree at her £1.35m home, complete with an assemblage of white baubles and tinsel 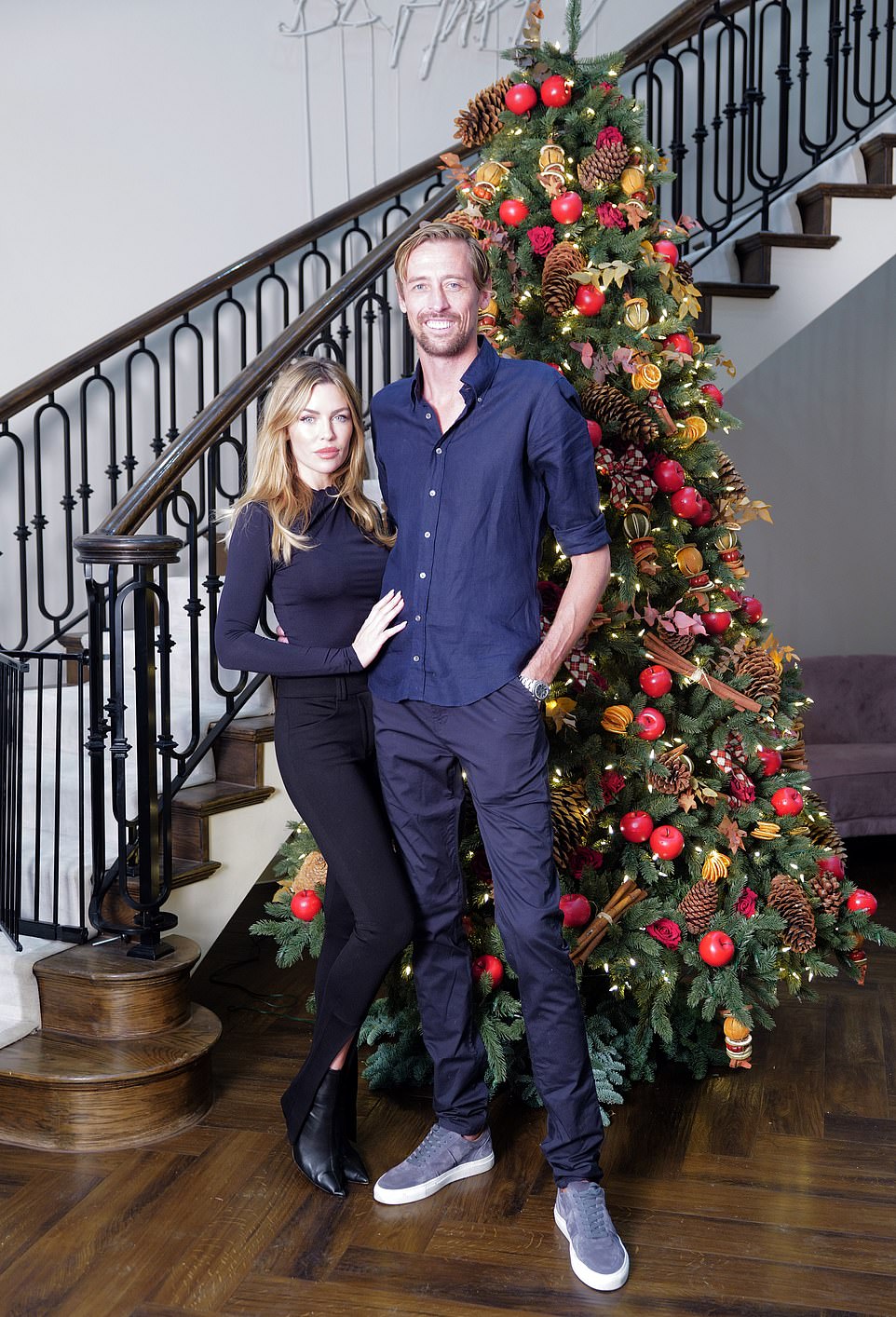 Wow: Abbey Clancy and Peter Crouch got in the festive spirit on Monday as they put up their Christmas decorations a whopping 40 days before the big day

This Morning presenter Holly, 40, also gave a glimpse into her London home, with a pretty tree in the background of her swanky kitchen.

Elsewhere a beautiful wreath complete with pink roses had been adorned with gorgeous candles from the lifestyle brand, as well as a pair of miniature red tree candles. 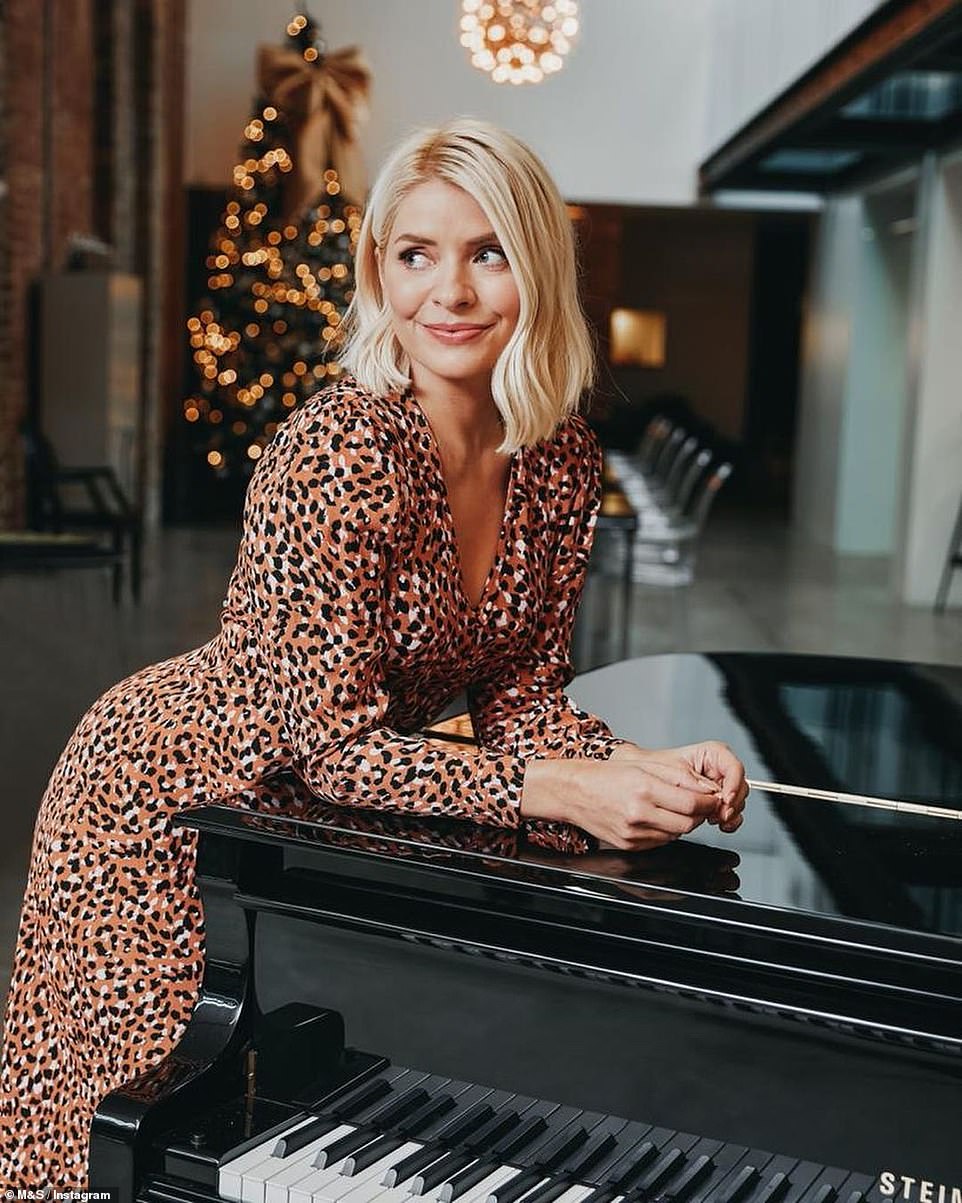 Stunning: Holly Willoughby has also given fans a glimpse of her £3 million house’s interior complete with Christmas decorations 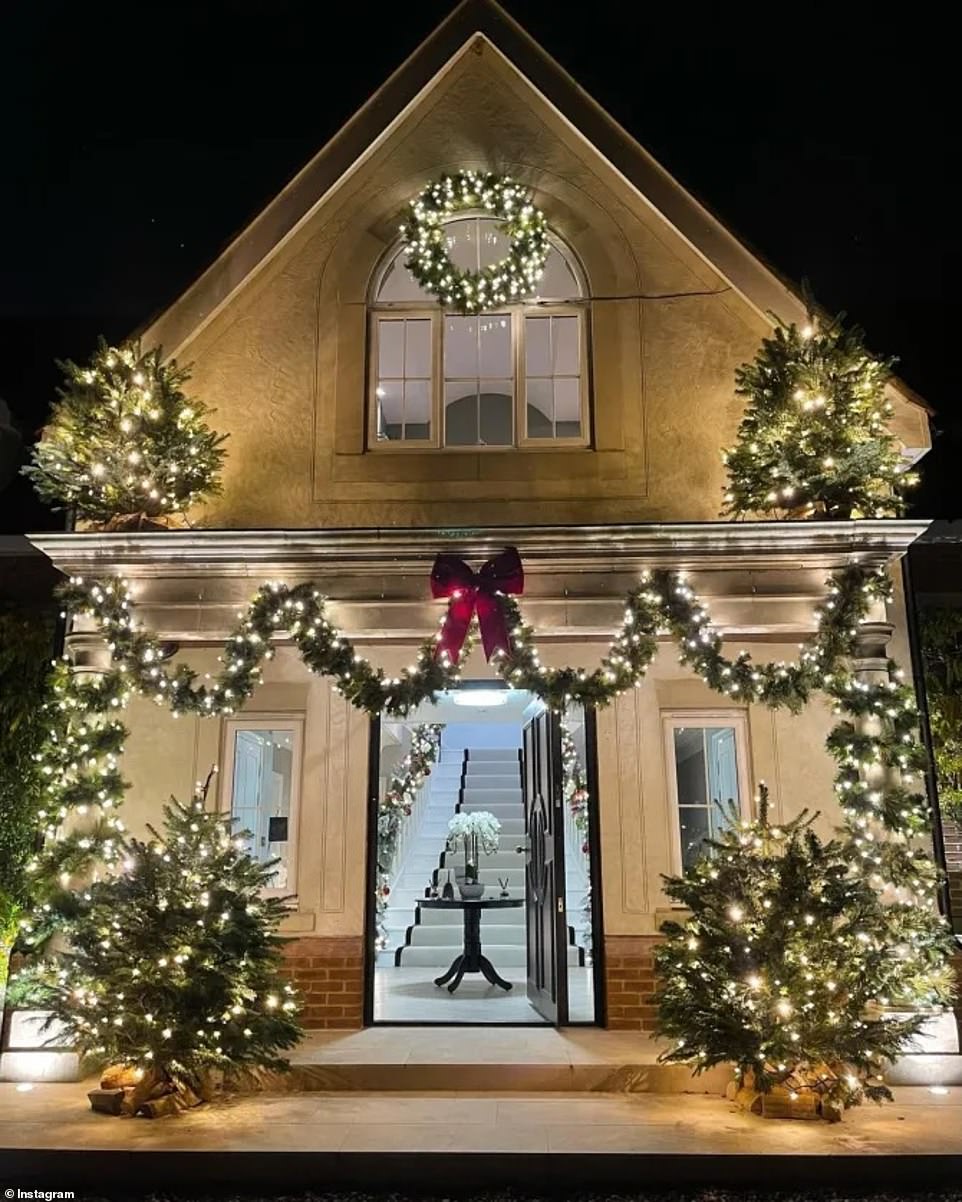 The 27-year-old took to Instagram on Sunday, via her The Bowen Home account, to showcase the property’s spectacularly festive façade.

Dazzling white lights, a gigantic wreath, along with coordinating green tinsel and a gorgeous purple bow, decorated by Jessica Owens, accentuated the opulence of the house.

Through an imposing black front door, a grand staircase had been adorned with intricate wreaths, while white flowers graced a table in the centre of their hallway. 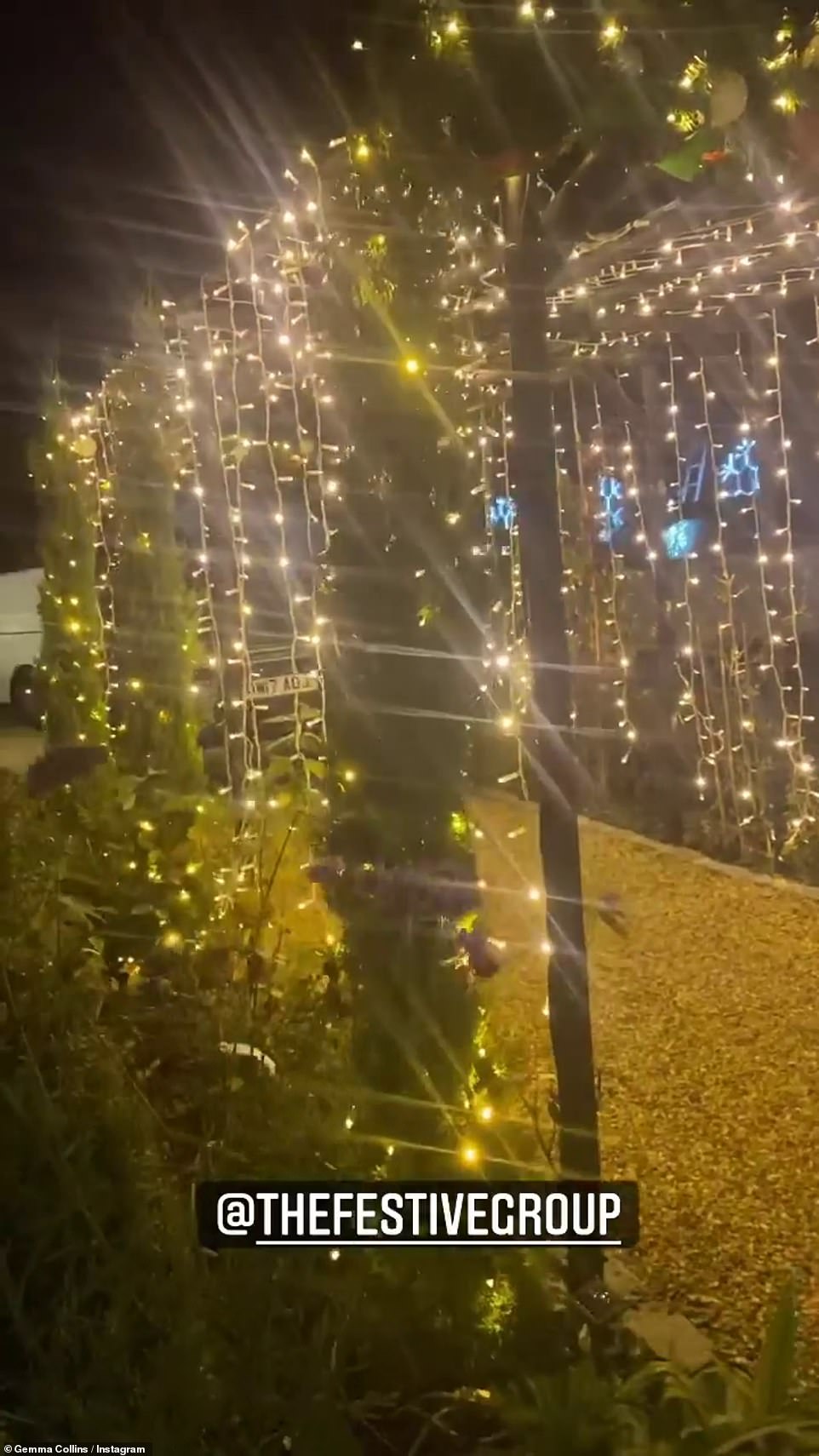 Wow: Gemma has decked out her home with Christmas decorations ahead of the festive season 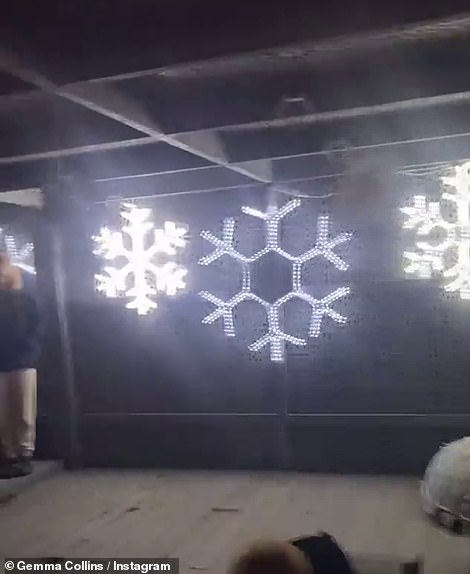 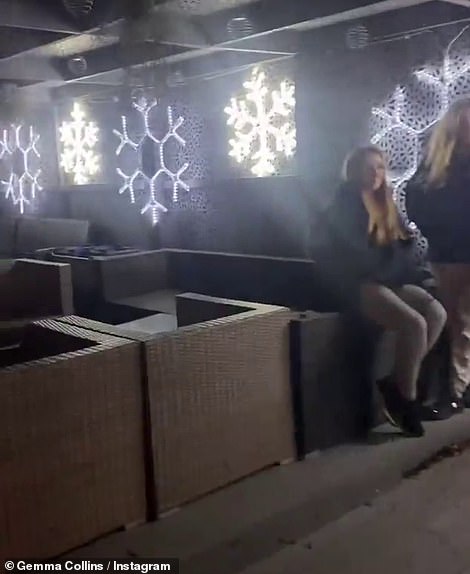 Yuletide: Gemma also arranged for several snowflake shaped lights to be strewn up in her garden

Abbey Clancy and Peter Crouch have also decked out their home and did so a whopping 40 days before the big day.

The couple enlisted the help of florist to the stars Warren Bushaway who was on-hand to decorate the vast tree and their front door in glam style.

Ensuring they had a great time during the decorating, Peter was seen pulling off his legendary robot football celebration as well as using his 6ft6in height to get to the hard to reach places in their lavish home.

Abbey looked simply sensational as she posed next to Peter in their lavish home complete with a spiral staircase and bold neon sign. 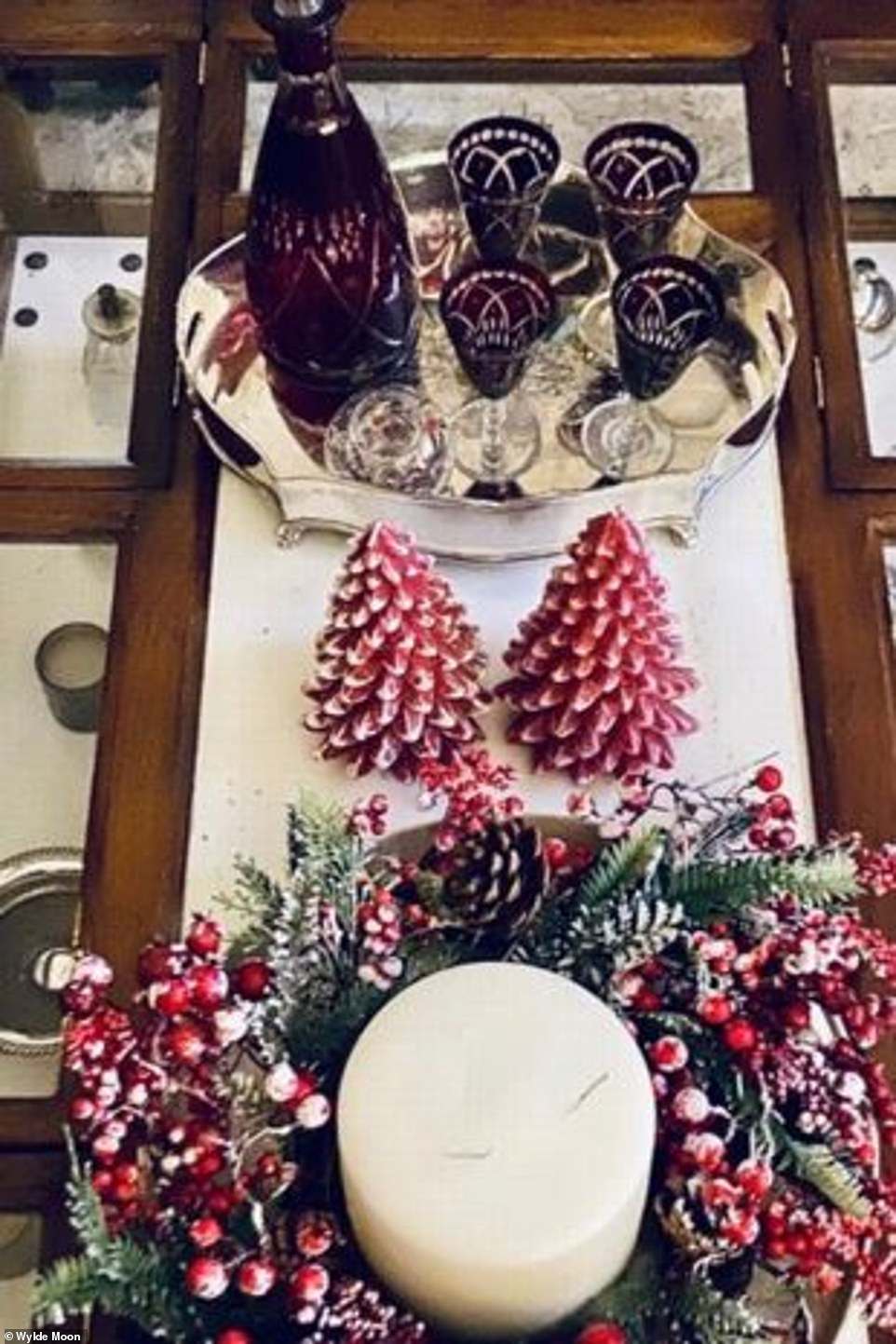 Gorgeous: Clearly a fan of a glass or two, Holly had laid out a stylish purple bottle and a set of coordinating sherry clippers on a traditional silver tray 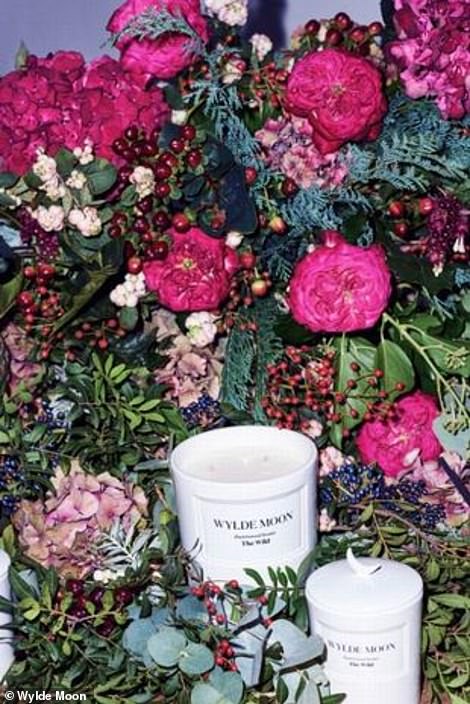 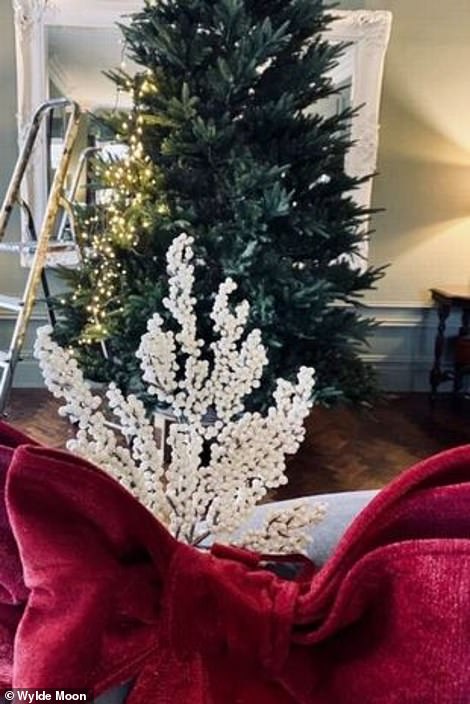 Wow! A beautiful wreath complete with pink roses had been adorned with gorgeous candles from the lifestyle brand 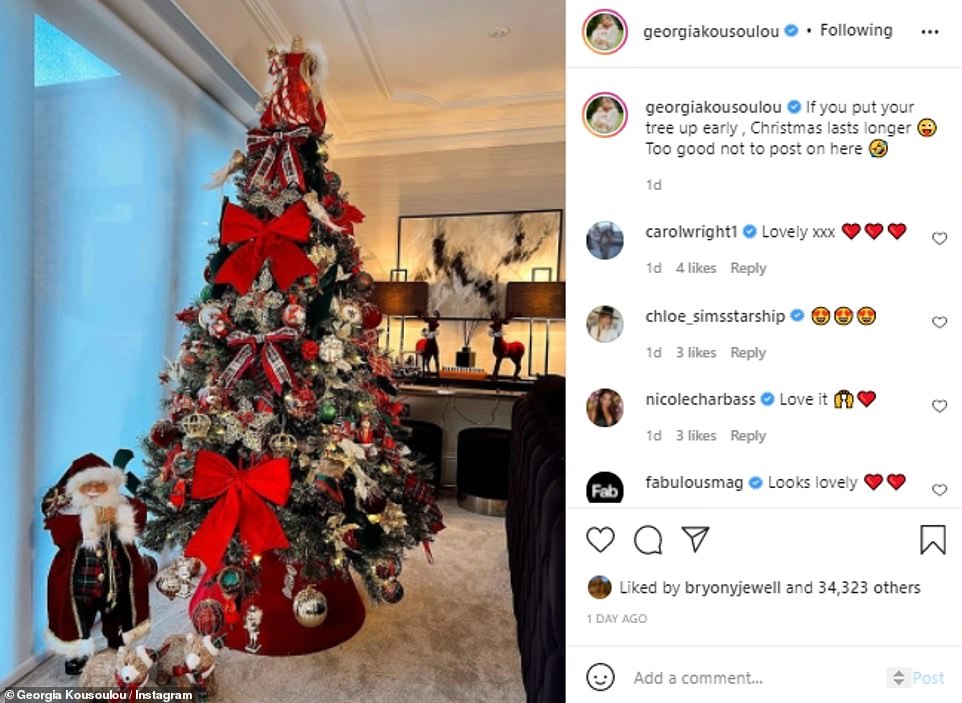 The sign – which read Be Happy – stood out boldly against the extremely traditional tree compared to the edgy theme of the neon light.

Other stars getting in on the early decorating action include Georgia Kousoulou and the Humes family, who kicked things off early with their lavish arrangements.

Defending her decision to start things off before even entering December, the TOWIE star posted a stunning shot of her tree to Instagram and added the caption: ‘If you put your tree up early , Christmas lasts longer. Too good not to post on here’. 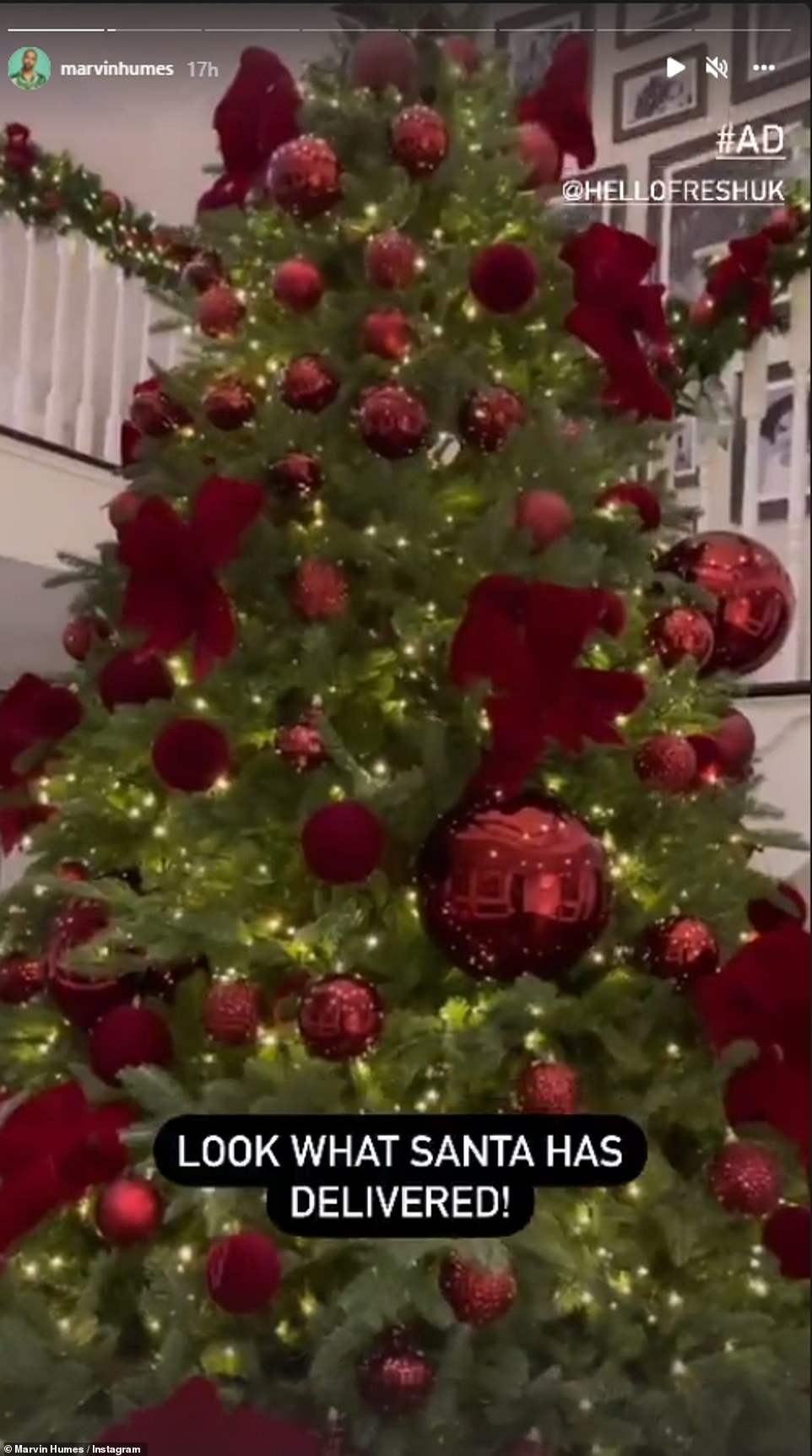 Amazing: Rochelle and Marvin Humes meanwhile had enlisted the help of professional organisers to erect their tree and place the stunning decorations

It comes after over in the US Britney Spears appeared to be in the holiday spirit as she has also already put up her Christmas tree even thought it’s not December yet.

The musical artist, 39, took to Instagram Monday with a pair of clips in which she showed off how her Southern California home is decorated as the holiday season commences, as she made a change.

‘I changed my pink tree to red … it’s been pink for 4 years and I just love sharing it with all of you now that it’s red!!!!’ Spears captioned a clip scored to the Justin Bieber holiday song Mistletoe. 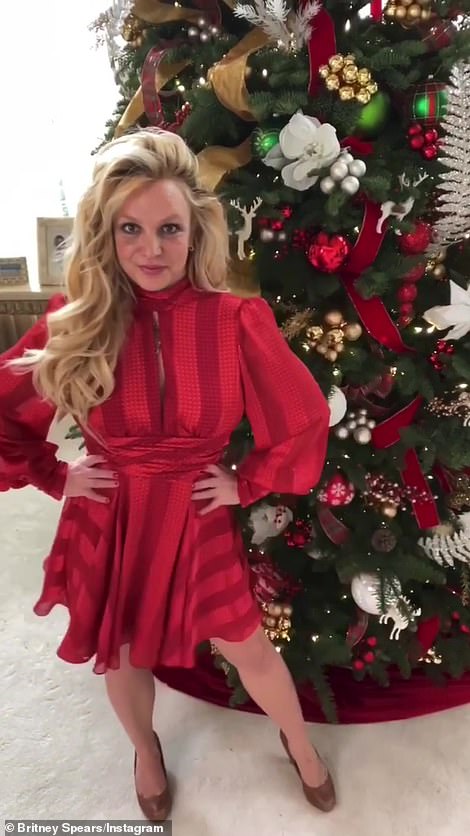 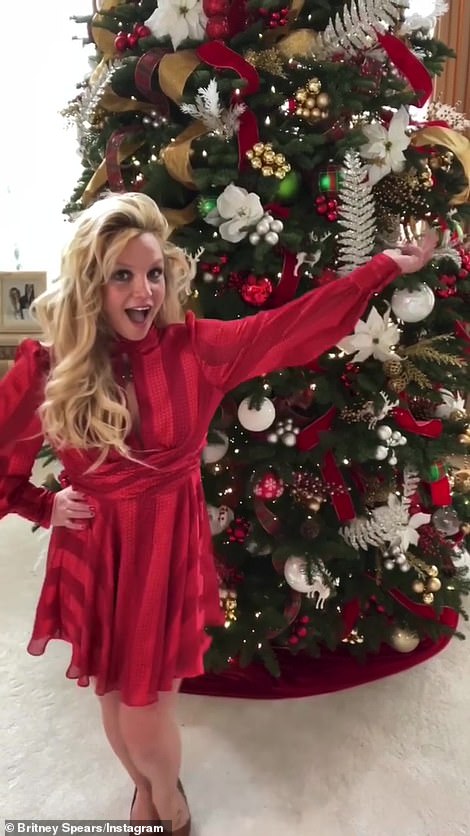 Fancy: It comes after over in the US Britney Spears appeared to be in the holiday spirit as she has also already put up her Christmas tree even thought it’s not December yet

In the clip, the Grammy-winning pop star was seen beaming in a balcony in her home overlooking a large Christmas tree.

She alternated between two outfits, as she wore a red shoulderless skirt with black heels and a necklace. Spears was also seen in a black skirt with long sleeves and intricate patterns embroidered in silver.

The Lucky singer continued to play the Bieber song in the background in a second post in which she posed alongside the tree on the lower level of the home.

‘Ok so I thought a view of my tree actually beside it would be more appropriate than a nose dive view off my balcony … oh well,’ she said. ‘I get silly this time of year … hot cocoa please!!!!!! God bless !!!!’

In the second post, Spears alternated between two costumes: One was a long-sleeved cheetah skin onesie with black boots with a necklace.

The other was a striped red dress with long sleeves and brown shoes. She had her famed blonde locks parted to the side as she posed in front of her tree.

Spears was seen getting an early start on the holidays amid news her mother Lynne Spears is hoping to reconnect with her this Thanksgiving. 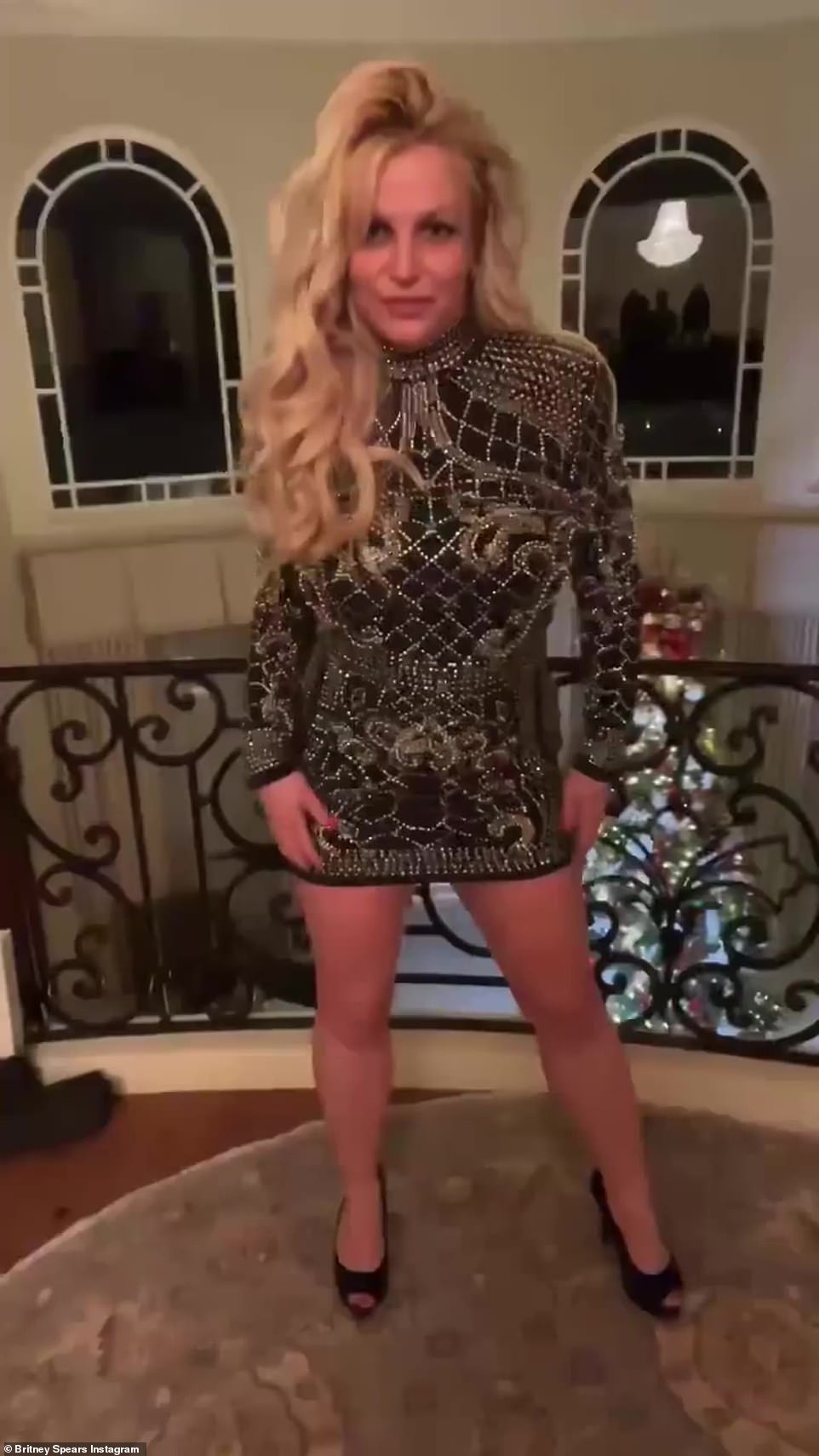 Glimpse: The musical artist, 39, took to Instagram on Monday to show off some Christmas party looks and showed off the tree in the background