She’s been dubbed ‘Catwoman’ due to her feline features – but has always denied having plastic surgery.

And Jocelyn Wildenstein, 82, and her designer fiancé Lloyd Klein, 55, continue to look loved up in their heavily filtered Instagram snaps following a rocky 18-year romance.

The couple have been engaged since 2017 when Lloyd presented the New York socialite with a 32-carat diamond ring which is reportedly ‘worth millions.’ 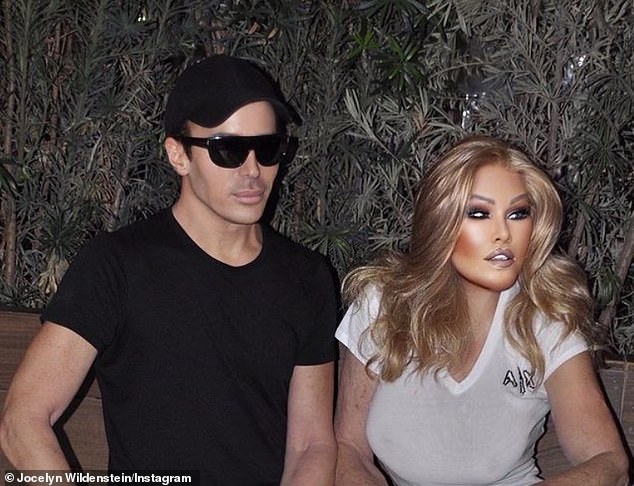 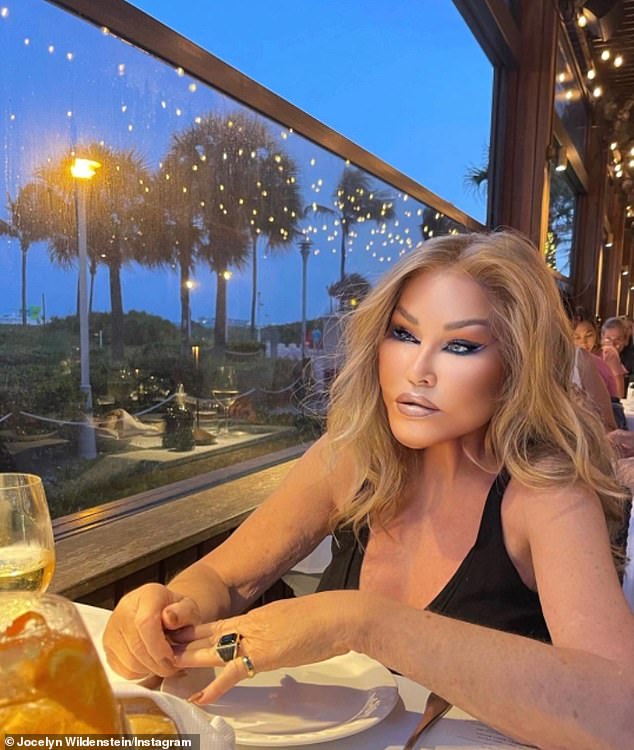 Vow: The couple have been engaged since 2017 when Lloyd presented the New York socialite with a 32-carat diamond ring which is reportedly ‘worth millions’ but have never married

They were due to marry in 2018 but are yet to make it down the aisle two years after she was arrested for allegedly slashing her boyfriend’s chest with a pair of scissors.

Jocelyn was accused of clawing her partner Lloyd before slashing his chest at her apartment in Trump World Tower, New York, at around 1.30 in the morning.

Lloyd said he had been as forced to push her into a cupboard until the police arrived. 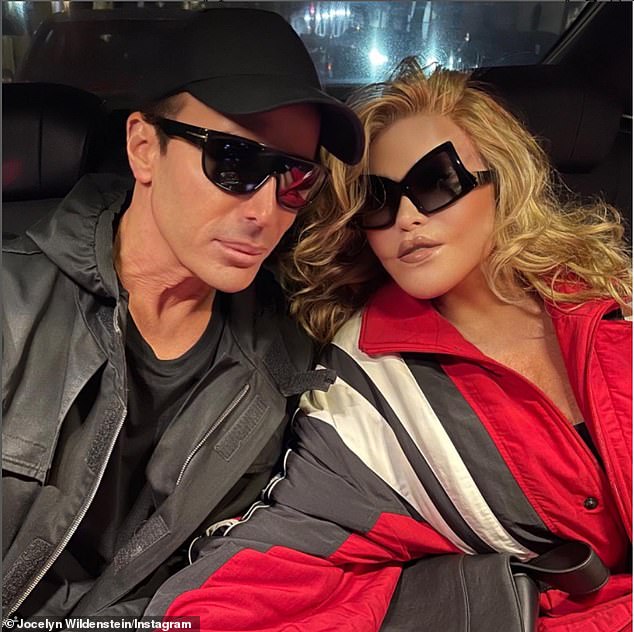 Born this way? Jocelyn has always denied having plastic surgery – she filed for bankruptcy in 2018 after squandering her $2.5BILLION divorce settlement

The charges were later dropped and Jocelyn said: ‘In life, we take our frustrations out on those we love the most, and I directed mine towards Lloyd.

‘I let my frustration turn to anger, and it was wrong. I saw red and turned into a woman possessed. I lashed out like an angry cat.

‘The fight with Lloyd was when I’d hit rock bottom. I felt I’d reached the end of the line and just snapped.

A year later, Jocelyn and Lloyd hit headlines as they dismissed claims of a late night fight.

They insisted they injured themselves having passionate sex after a dish of beef bourguignon exploded. 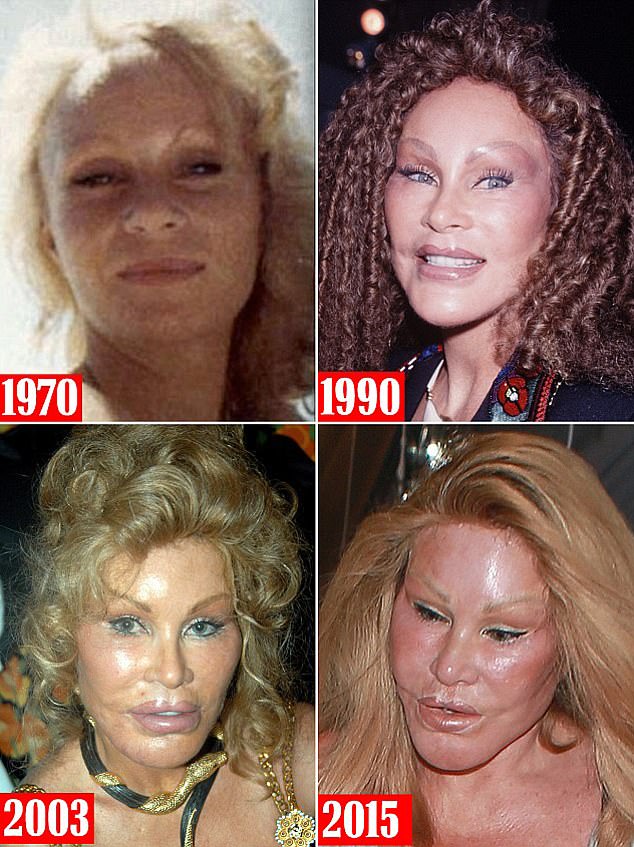 Through the years: The socialite earned the nickname ‘Catwoman’ as a result of her exaggerated feline features, which have become much more pronounced over time

Neighbours had heard screaming coming from their apartment and police arrested both after they arrived at 1am to find the shattered casserole dish on the kitchen floor, bruises to Wildenstein’s neck and arms and a cut to Klein’s forehead.

Canadian-born couturier Lloyd said he had raced to the shower to wash the scalding broth off his legs where he says he slipped and fell, suffering a small cut to the forehead.

Wildenstein joined him the bathroom to check he was OK but before long the couple had moved to the bedroom and started to have sex.

They told DailyMail.com that neighbors overheard their noisy lovemaking and wrongly leapt to the conclusion that Wildenstein was being attacked.

‘I burned my legs when the dish exploded and I went to the shower to put water on it,’ Klein said.

‘I must have made a lot of noise, I was panicking, but Jocelyn came into the bathroom to see that I was OK and one thing led to another.

‘I slipped and cut my forehead because everything was very wet, but it was no big deal, a tiny cut.

‘We went into the bedroom and had great, passionate sex. The neighbours probably heard all this and assumed someone was being murdered.

‘A few minutes later the security came into the apartment uninvited and walked right in on us in the bedroom. 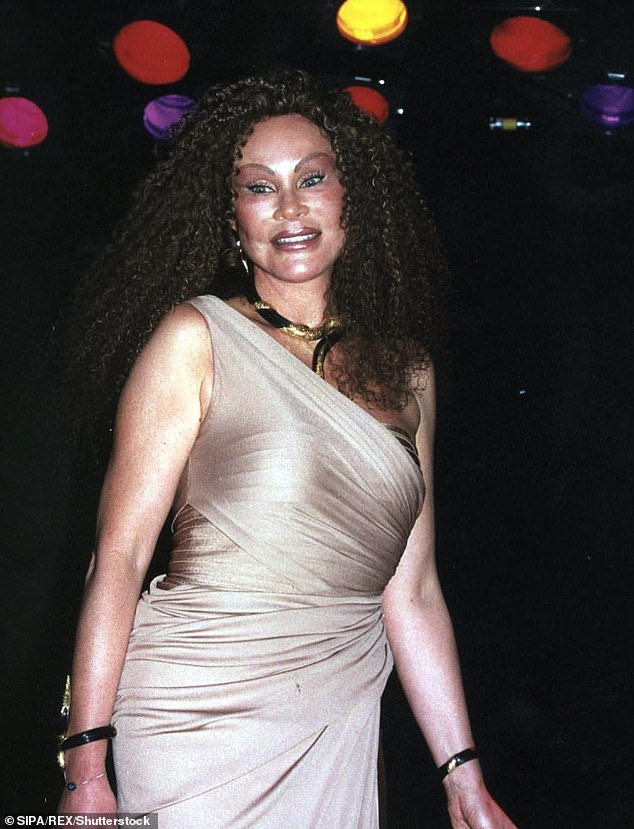 Socialite: Jocelyn rose to fame in the Nineties during a high-profile divorce from art dealer Alec Wildenstein, receiving over $2 billion from her husband in the split (pictured in 1998)

‘I can see why it looked like a fight with the food on the floor and the little bit of blood – but I can assure you it wasn’t that, 100 percent.’

Mother-of-three Wildenstein insisted the bruises on her neck and arms referenced in the criminal complaint were completely innocent.

‘Lloyd can be very passionate, he can be a little rough,’ she laughed. ‘That’s something I enjoy otherwise I would not have been with him all this time.

‘None of this would have happened if the cooking pot had not exploded. I have never seen anything like it. He burned himself and when I went to help him we took a shower together.

‘The security did not want to hear any explanations. They reached their own conclusion. It was a horrible time.’ 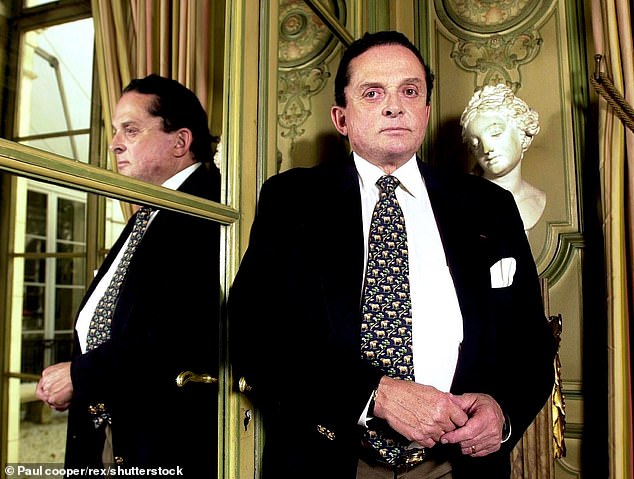 First love: Jocelyn’s ex-husband, art dealer Alex Wildenstein, pictured in 2000, a year after his divorce from her – he died in 2008

Police arrived minutes later and the couple were taken to different Manhattan hospitals before being booked into jail on misdemeanor assault charges.

The charges were dropped and they reconciled.

Wildenstein rose to fame in the Nineties during a high-profile divorce from art dealer Alec Wildenstein, receiving over $2 billion from her husband in the split.

Lloyd has denied reports that Jocelyn has had surgery.

He said: ‘I don’t understand the whole press and the Catwoman thing, because Jocelyn always looked like that.

‘She never really did anything to change her face. I have pictures from 16 years old where she looks exactly the same as today.’

In 2018. Jocelyn filed for bankruptcy and claimed she has no savings or stock after squandering her $2.5BILLION divorce settlement.

The woman who once purchased a capuchin monkey as a pet found herself with no checking or savings accounts, no retirement fund or pension plans and no investments according to her filing.

The filing also lists the $900 check Wildestein gets from Social Security each month as her only source of income. 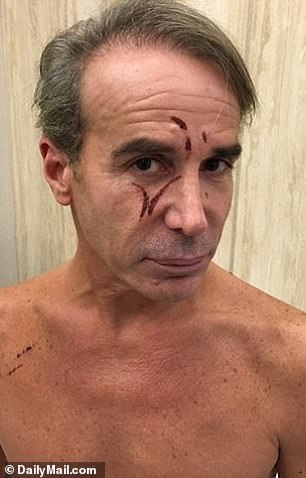 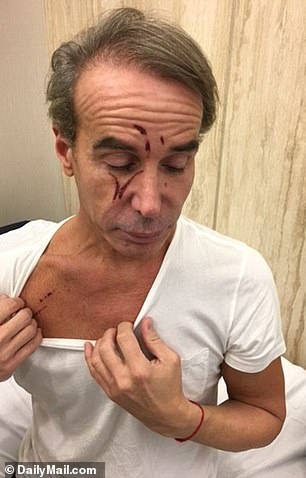 Rows: Wildenstein and Klein’s 15-year romance appeared to be over in December 2016 when Jocelyn sank her claws into his face in a now-notorious catfight

In January 2019, Lloyd unveiled his new face exclusively to DailyMailTV after undergoing a facial rejuvenation procedure following his years-long battle with cancer.

Klein was diagnosed with lymphoma in 2013. He had a tumour the size of an orange removed from his armpit and underwent three rounds of gruelling chemotherapy.

In 2017, he was told the cancer had spread to his spine and liver and he only had six months to live. But Klein told DailyMailTV in 2018 that he was in remission.

He said: ‘I knew at that moment I had to focus on what it is most important in my life – and that’s Jocelyn. For me it was so important to recognize that commitment by making her my wife.

‘She has always been there for me, throughout our ups and downs. I cannot imagine living a single day of my life without her.’

The French fashion designer said the intense chemotherapy destroyed his face, so he turned to Wildenstein, his girlfriend of 15 years to help look for a way to restore his face.

‘You go in and have the procedure done, 15- 20 minutes then you go home. As days go by you see the results. It’s incredible.’ 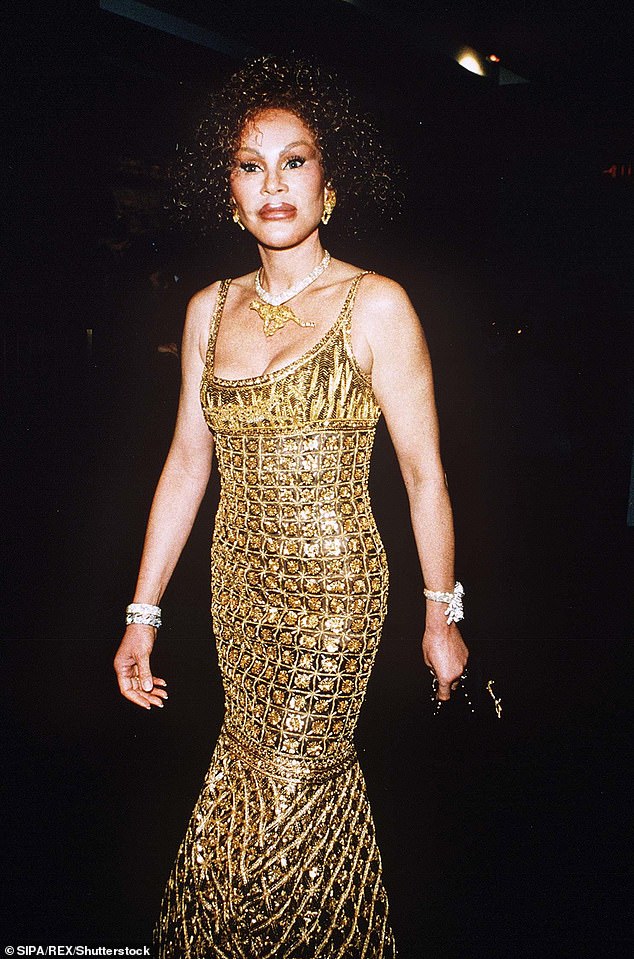 Her love: Lloyd has denied reports Jocelyn has had surgery, saying: ‘She never really did anything to change her face. I have pictures from 16 years old where she looks exactly the same as today’ (pictured in 1997)

Pip Edwards turns up the heat as she enjoys some ‘me time’ in a ‘detoxing’ $3,250 infrared sauna