The rail strikes were causing chaos across the UK on Tuesday.

Yet Lizzie Cundy didn’t let the travel drama interrupt her busy schedule as she was seen hopping onto a bike after appearing on Jeremy Vine On 5.

The former WAG, 54, gave up on waiting for a taxi and instead clambered onto the two wheeler in an off the shoulder white lace midi dress and towering red strappy heels. 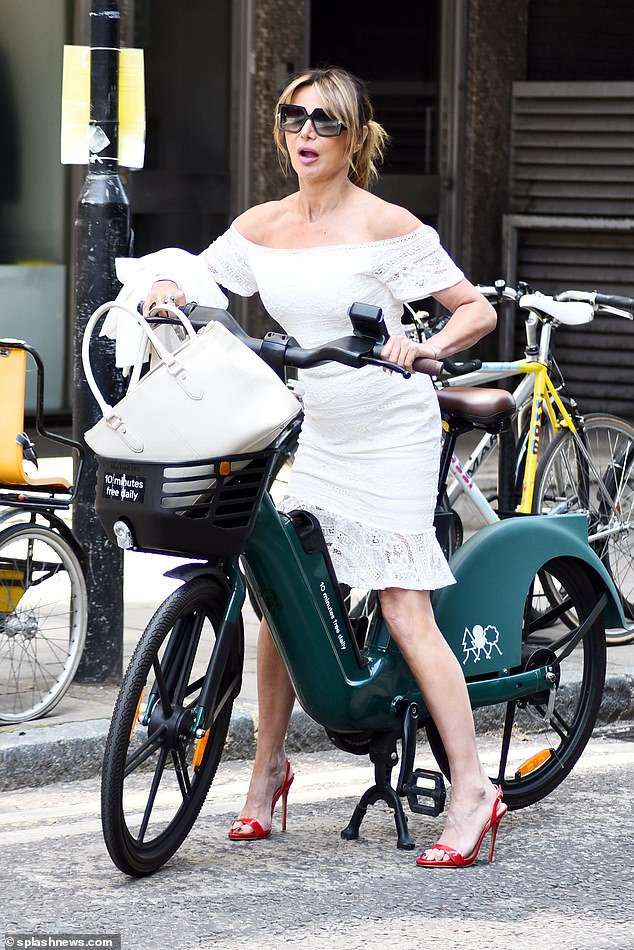 ‘Bloody strike’: Lizzie Cundy gave up on waiting for a taxi outside the ITN studios in London following her appearance on the Jeremy Vine TV show and decided to ride a bike instead

‘And then after my car didn’t show due to the mayhem so had to get on a bike to cycle from the studio in high heels!’

Speaking on the Jeremy Vine on 5 show she said the strikes are ‘hurting people’ and it is ‘toxic timing’. 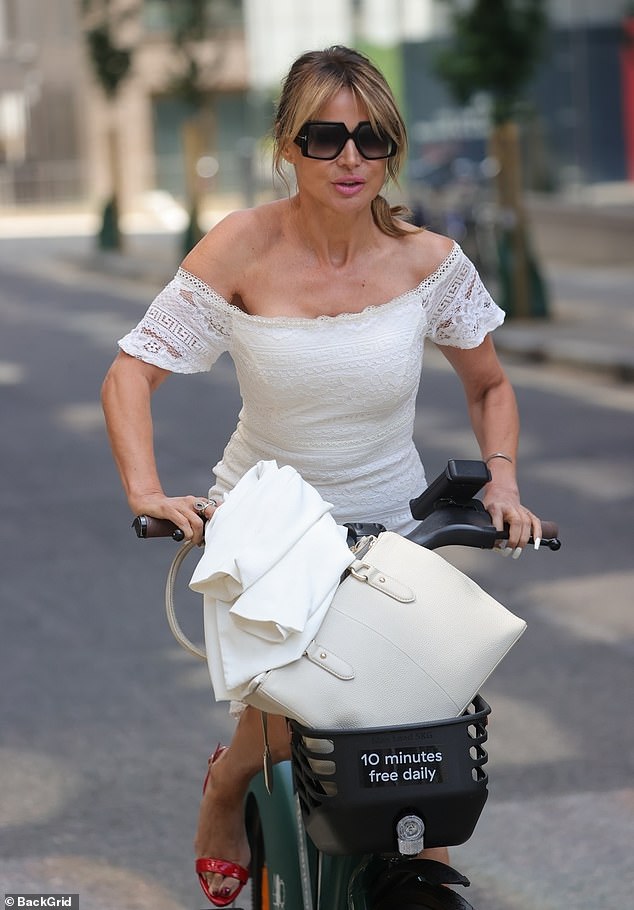 Making it work: The socialite, 54, was spotted climbing onto a bike in an off the shoulder white lace midi dress and towering red strappy heels

The model added: ‘I’m appalled [by people on strike]… we’re all feeling the pinch.’

The UK is currently facing it’s biggest rail strike in a generation with only around half of the network open and for just an 11-hour period today and on Thursday and Saturday of this week.

Almost all stations across Scotland and Wales are completely cut off, while there are also no services to the likes of Penzance in Cornwall, Bournemouth in Dorset, Chester in Cheshire and Blackpool in Lancashire. 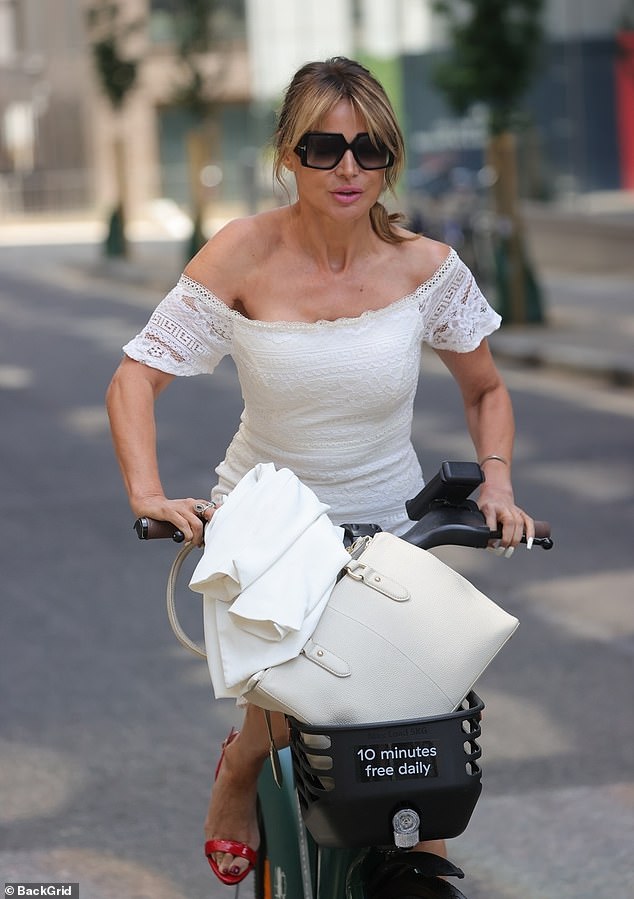 Nightmare: The beauty swept her blonde tresses back in a chic ponytail leaving her fringe shaping her face 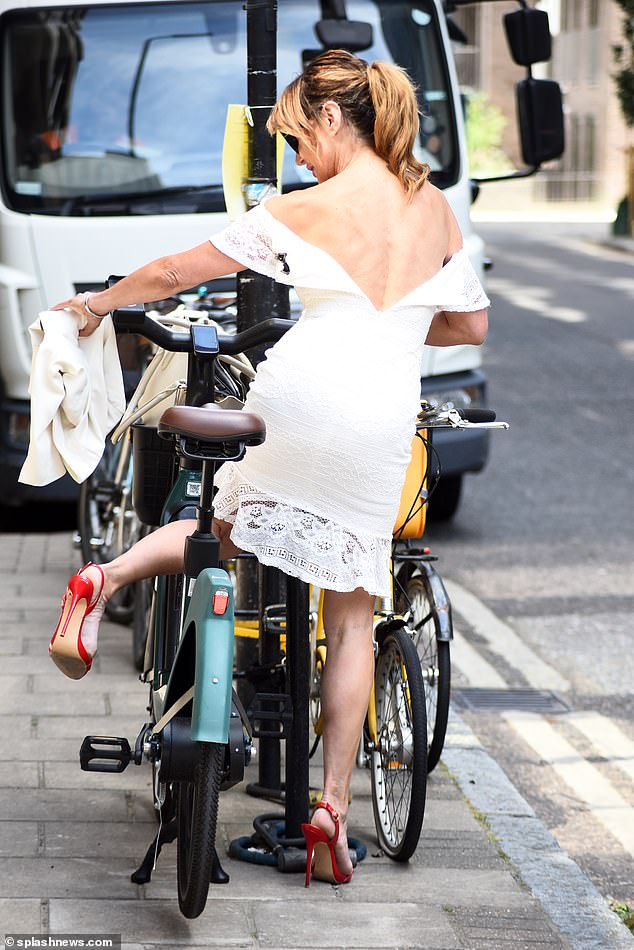 Wow: She flashed her back as she was spotted with her figure hugging dress half unzipped as she lifted her leg to climb onto the bike

There are also no passenger trains running north from Glasgow or Edinburgh, and the number of services on the three strike days is expected to be limited to around 4,500 compared with 20,000 normally.

The strikes involve a row over pay, jobs and conditions. The RMT wants pay rises for workers that recognise the RPI rate of inflation, which is currently 11.1 per cent, and a guarantee of no compulsory redundancies.

The union has claimed that Network Rail plans to cut jobs and reduce spending – with an impact on safety. It says that it is striking ‘due to the inability of the rail employers to come to a negotiated settlement with RMT’. 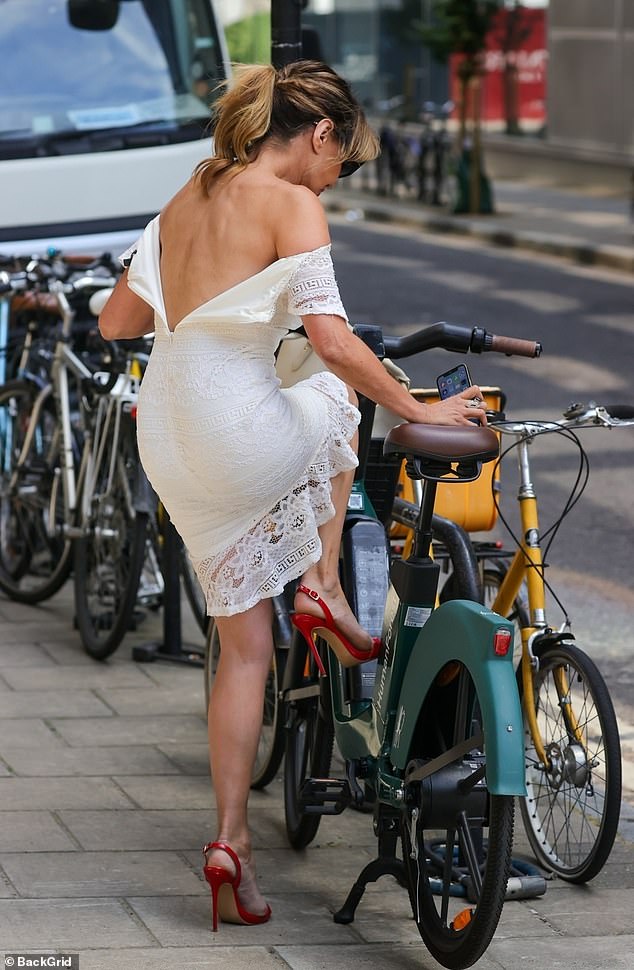 To warm! The model flashed her incredible legs as she climbed onto a bike in London 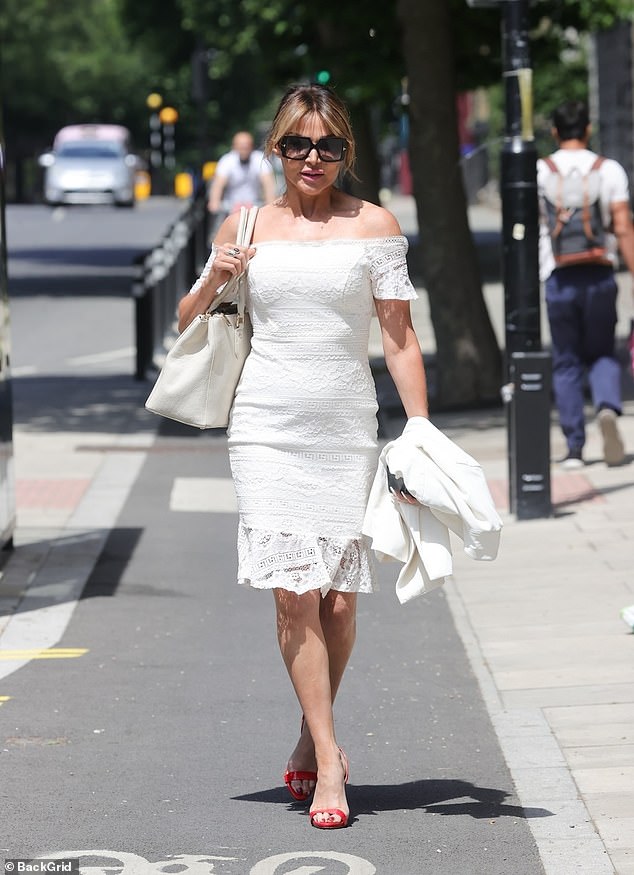 Soaking up the sun: Lizzie  opted for a radiant bronze palette of makeup including a pink lipstick as she hid behind a large pair of dark sunglasses 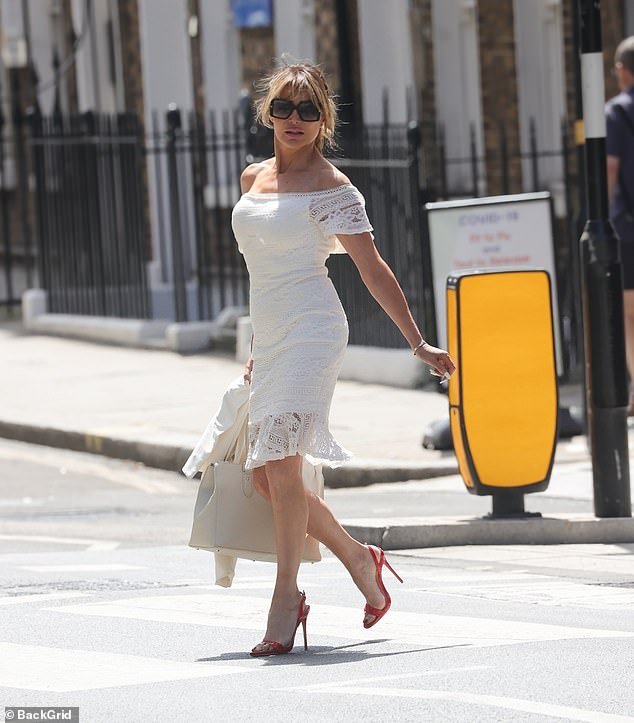 Glam: The presenter carried a matching blazer in her hand and a large white handbag before placing both in the basket at the front of the bike

The RMT claims Network Rail and train operators have ‘subjected their staff to multi-year pay freezes and plan to cut thousands of jobs’, while also accusing the Government of ‘abjectly failing in their responsibilities’.

But Network Rail and the Government say the union is unwilling to modernise work practices. Despite a pay freeze in 2021 – during the height of the pandemic – Network Rail has offered a rise of at least 2 per cent for 2022.

The context of the dispute is that railway bosses are proposing to make efficiency savings, especially as fewer passengers are travelling by train because of the pandemic, which has led to more people working from home. 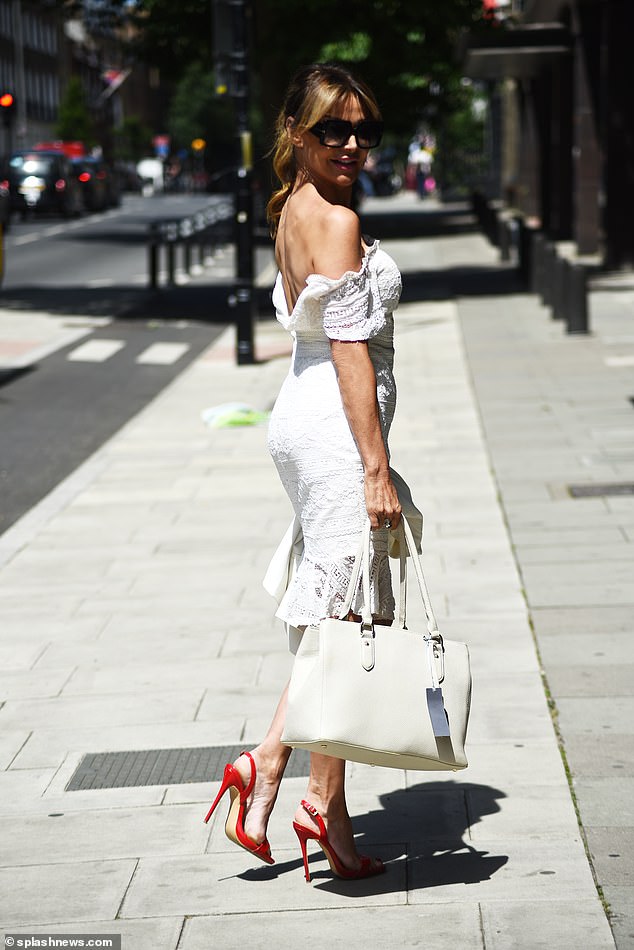 The Government is not involved in negotiations. Transport Secretary Grant Shapps said it is up to the unions and employers to negotiate pay and conditions, but Labour and the unions believe he should be taking part in talks.

The Centre for Economics and Business Research consultancy has calculated that 0.8 per cent of staff in Britain – more than 250,000 people – will not be able to get to work today and therefore be unable to work.

It estimates that the strikes are likely to cost the economy at least £91million in staff absences. Some £45.1million of this will be today, because of the greater number of commuters then and the separate Tube strike. 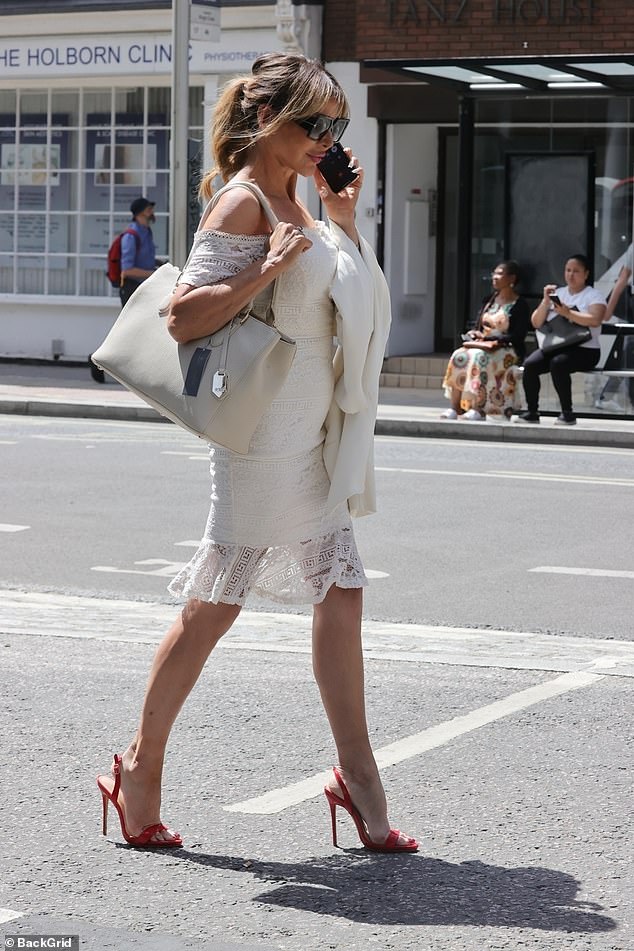 ‘Appalled’: Lizzie explained: ‘After my car didn’t show due to the mayhem so had to get on a bike to cycle from the studio in high heels!’ 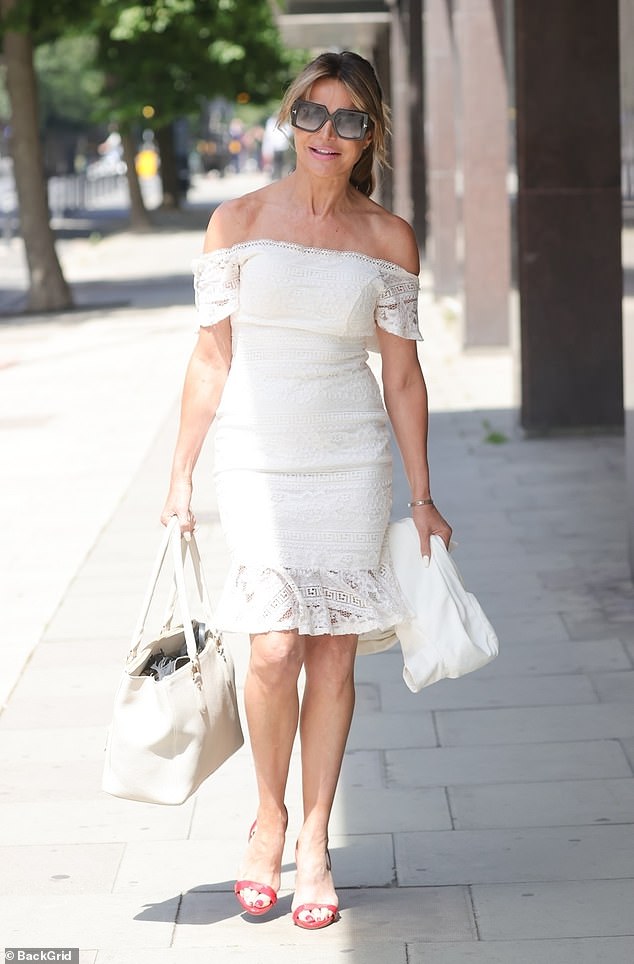 ‘We’re all feeling the pinch’: The UK is currently facing it’s biggest rail strike in a generation with only around half of the network open