Love Island’s Malin Andersson looked incredible as she wowed in a hot pink swimsuit during a sun-soaked getaway to Palma, Spain on Tuesday, five months after giving birth to daughter Xaya.

The reality star, 29, opted for a one-piece number with backless detailing and some strings tied along the sides.

The stunner posed up a storm as she enjoyed the poolside, and accessorised her holiday look with necklaces, jewellery and a wristwatch. 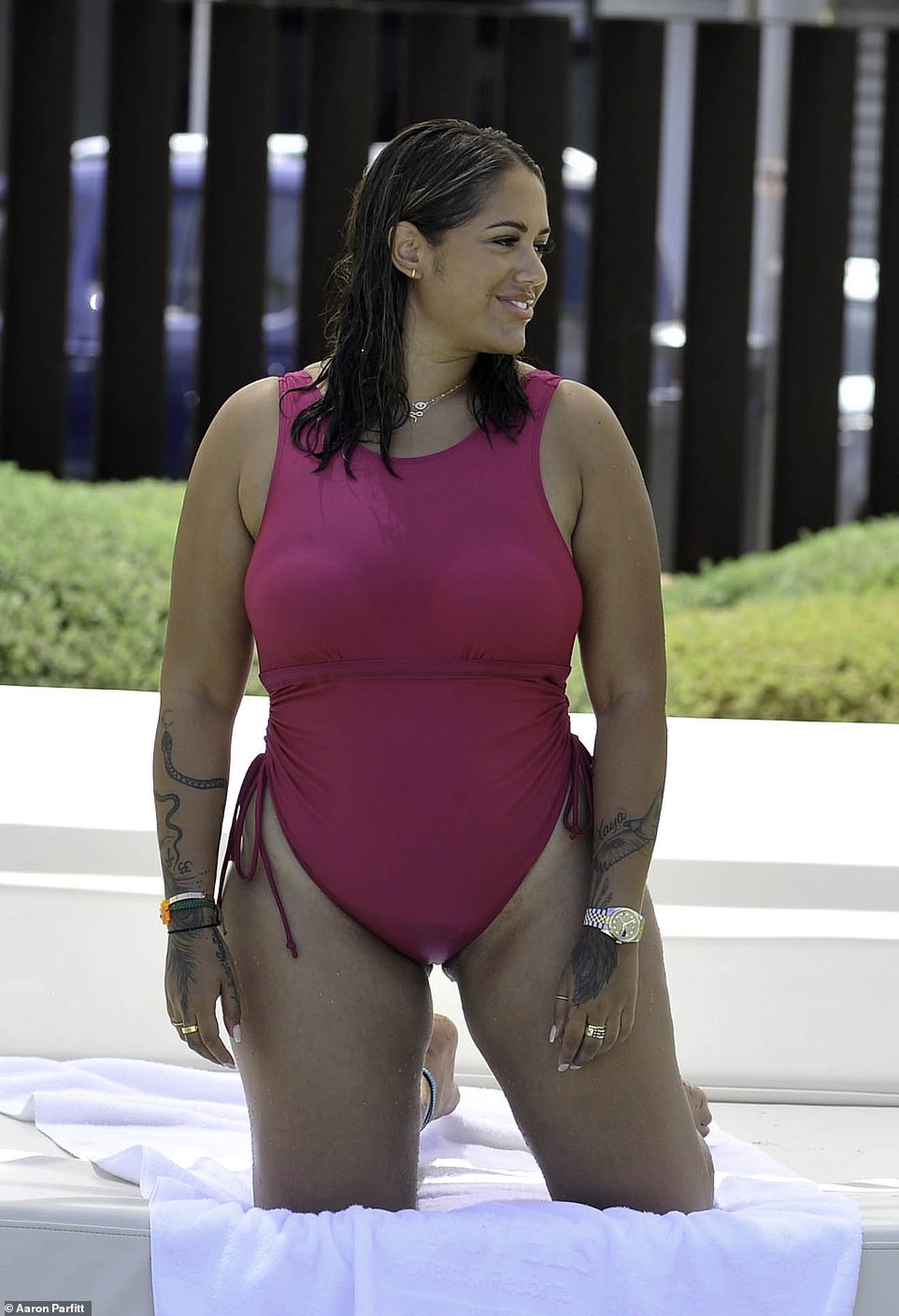 Poolside fun: Love Island’s Malin Andersson looked incredible as she wowed in a hot pink swimsuit during a sun-soaked getaway to Palma, Spain on Tuesday – five months after giving birth to daughter Xaya 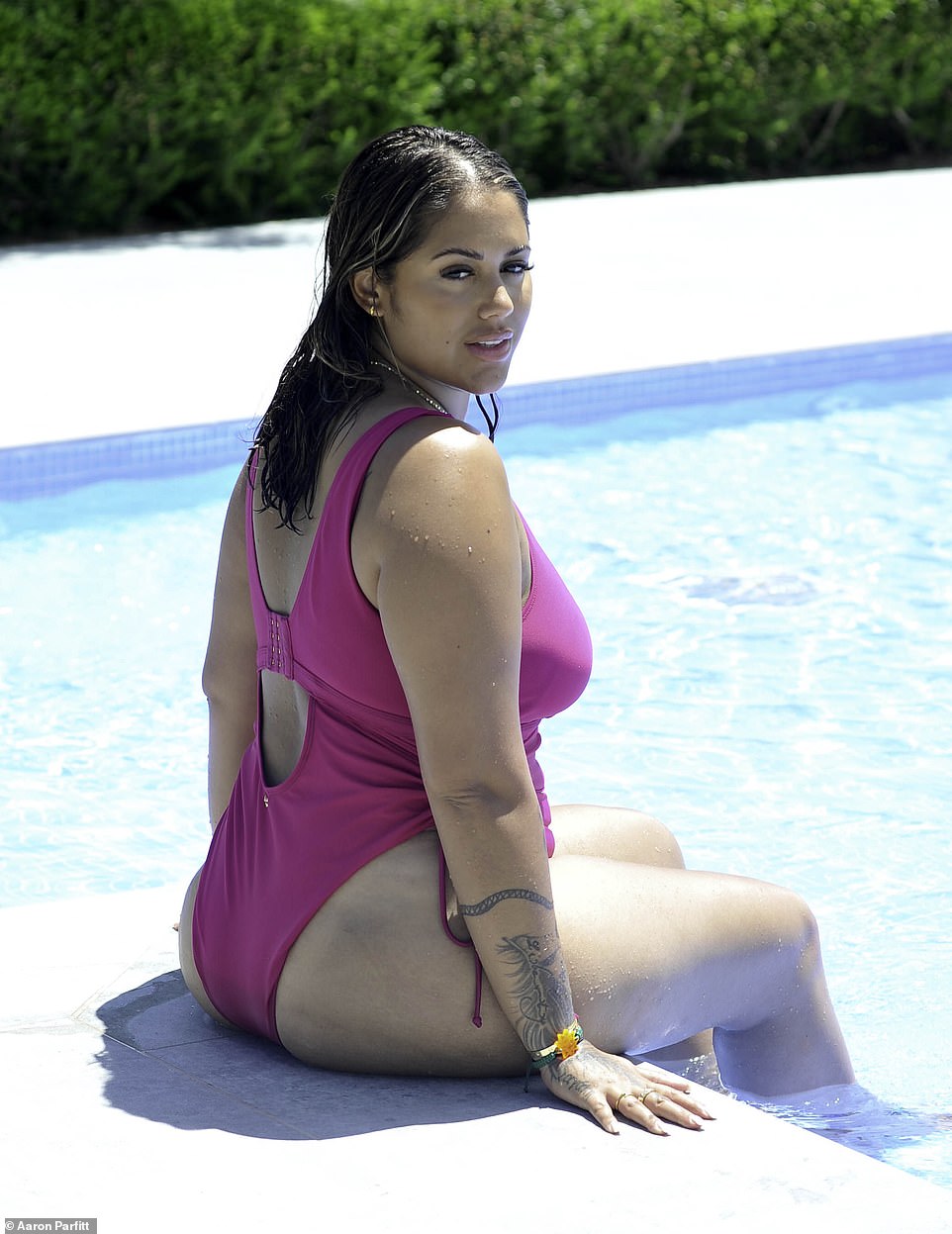 Stunner: The reality star, 29, opted for a one-piece number with backless detailing and some strings tied along the sides

She showed off her impressive collection of hand tattoos on each arm as the influencer wore her highlighted chestnut locks down.

She appeared to enjoy her day in the sun, striking a series of poses for a photoshoot on the sunbeds and at times braving the pool to cool off.

It comes as Malin took her baby Xaya to the grave of her late daughter Consy, earlier this month. Consy sadly passed away aged four weeks old on January 22 2019, after she was born premature.

Describing the trip as ‘a very bittersweet moment’, the television personality welcomed Xaya at the end of January with her boyfriend Jared. 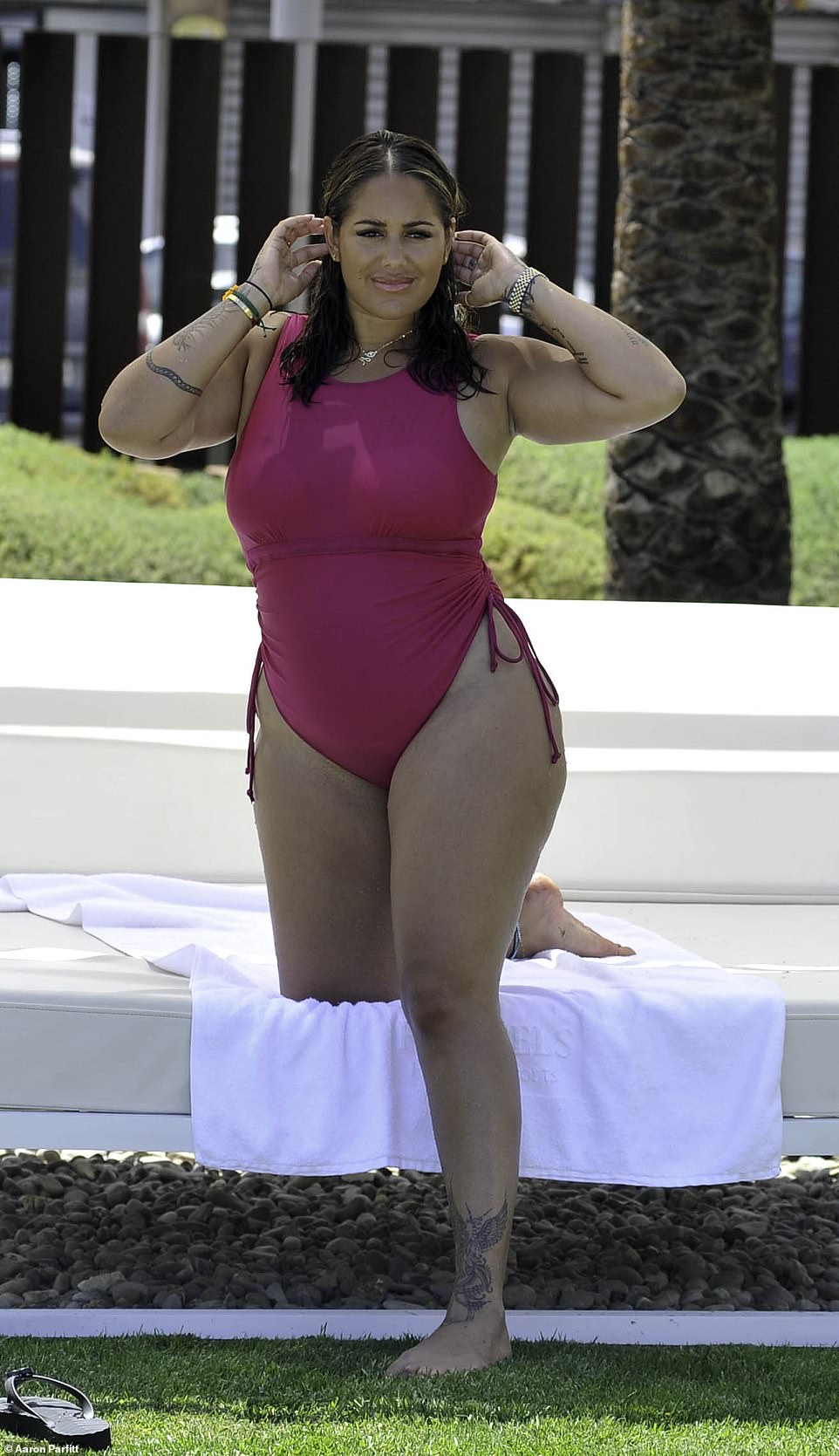 Striking a pose: The stunner posed up a storm as she enjoyed the poolside, and accessorised her holiday look with necklaces, jewellery and a wristwatch

In 2019, Consy died at just four weeks old after being born seven weeks premature, and Malin took Xaya to meet her older sister for the first time at her grave, sharing a picture of the moment and a heartfelt caption on Instagram.

She wrote: ‘Today I took Xaya to meet her older sister.

‘It was a very bittersweet moment as it was a heartwarming feeling taking Xaya somewhere so special and close to my heart, however also very difficult as her older sister is no longer here to guide her and be with her. 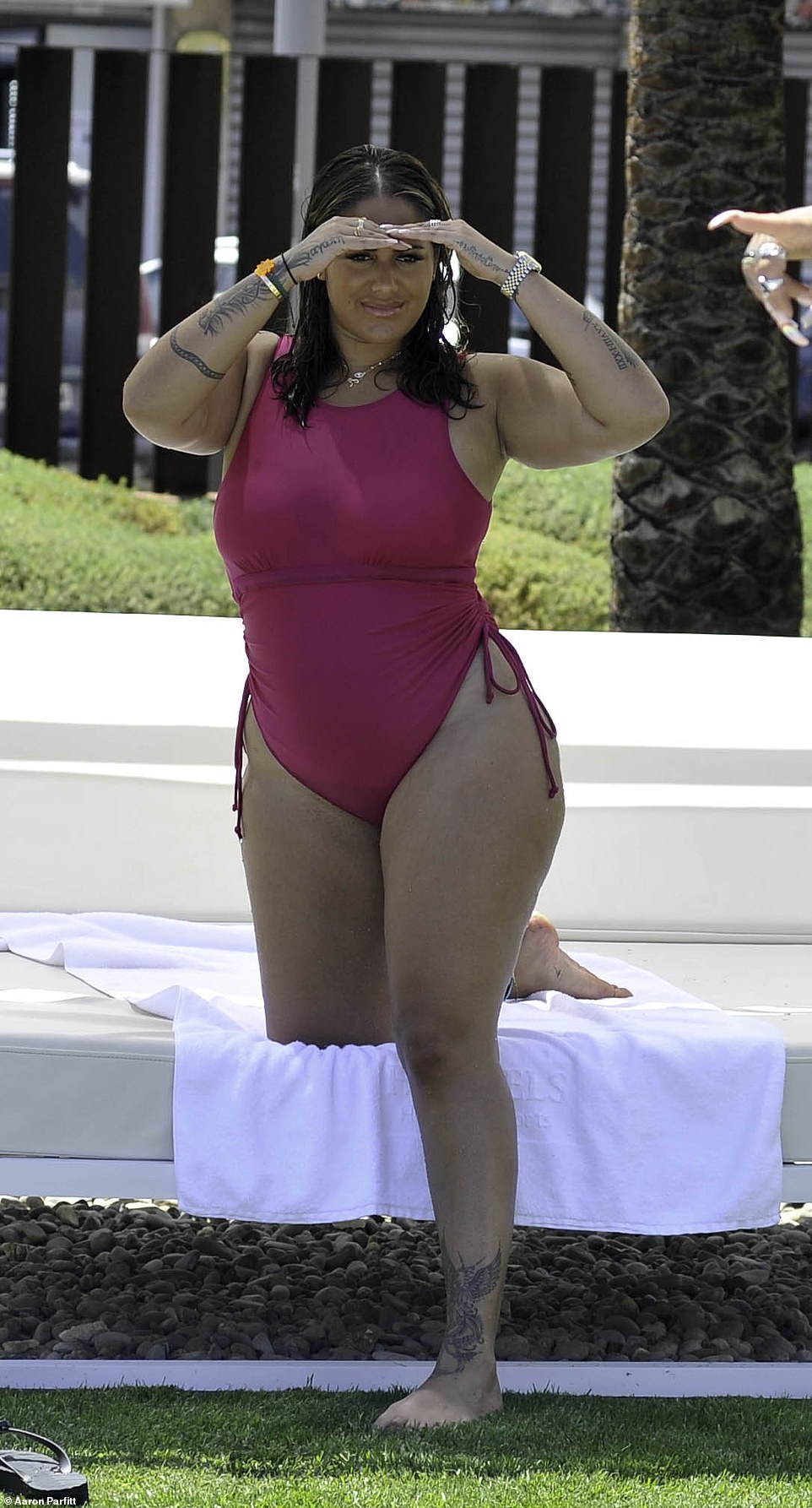 Flaunting her stuff: She showed off her impressive collection of hand tattoos on each arm as the influencer wore her highlighted chestnut locks down

‘The funny thing is, Xaya smiled and laughed. She giggled as I leant down next to Consy’s grave and that gave me some crazy amount of overwhelming peace. Almost like she could feel her.

‘I’ll never hide away from talking about Consy to Xaya, as I want to keep her memory alive – but also normalising that children do die, and it’s okay to talk about it.

‘I saw a quote today. ‘Grief is like the ocean. it comes in waves ebbing and flowing. Sometimes the water is calm and sometimes it’s overwhelming. All we can do is learn to swim.’ 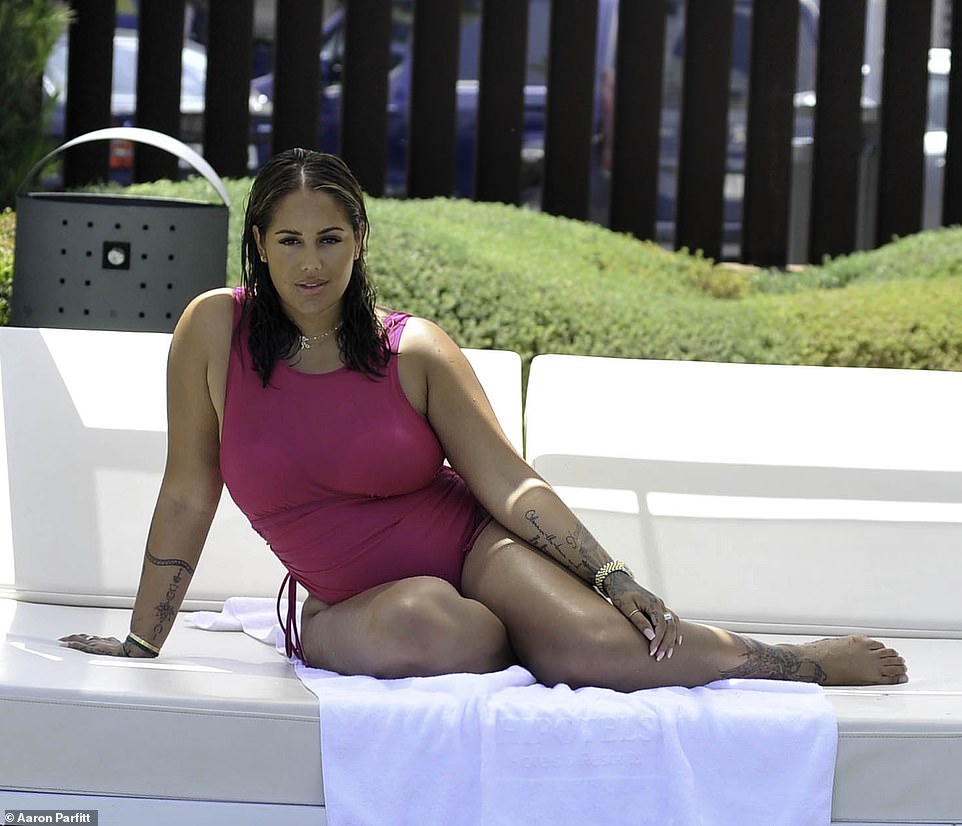 Time for herself: Malin has no doubt enjoyed some time in the sunshine after welcoming her daughter

Malin welcomed Xaya on her due date in January, three years after the tragic death of her daughter Consy.

Malin revealed Xaya was born via emergency c-section and described it as a ‘bittersweet experience’ as surgeons used the same scar from when she gave birth to her late daughter Consy. 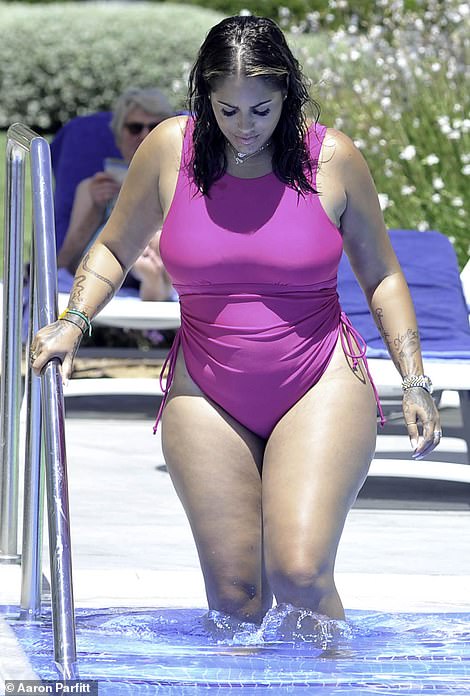 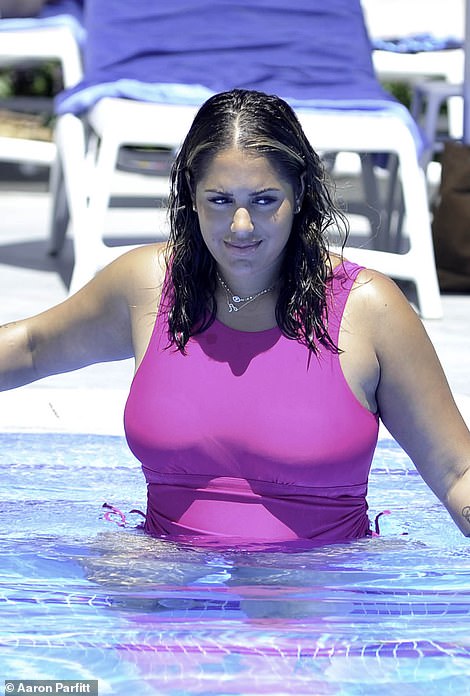 Gorgeous: Malin looked incredible in the one-piece magenta swimsuit as she went for a dip in the pool 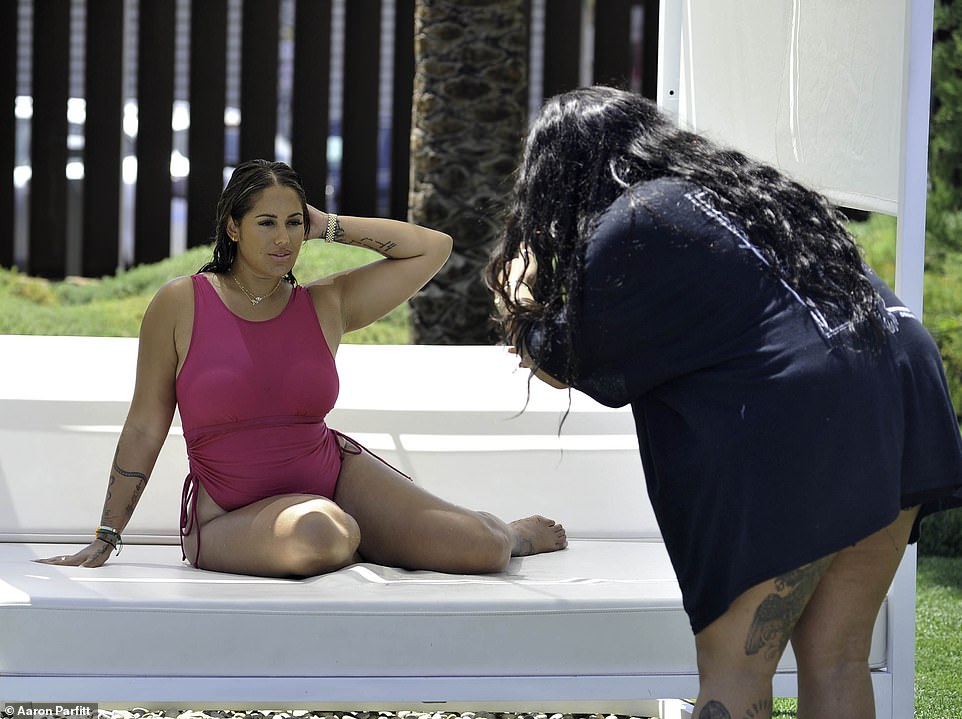 Photoshoot: Malin posed on the sunbeds as she flaunted her curves for a photoshoot while enjoying the sun

She explained: ‘I ended up having an emergency c-section with her, they took her out of the same scar Consy came from.. that was a bittersweet experience for me which I needed to take in after.

‘I can’t even describe the amount of love she has given us, and how it feels to be a mum again – but to a healthy baby. I look at her and I have to pinch myself..

‘She’s the spit of her dad, and is covered in black thick hair (I’m jealous.) 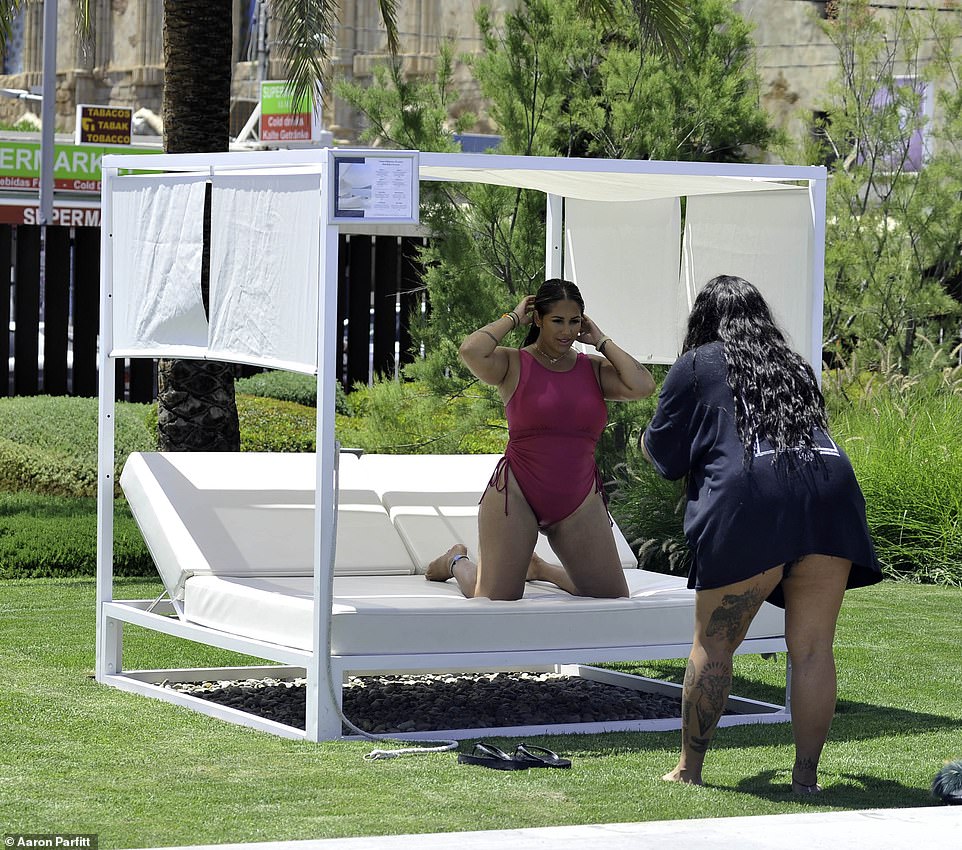 Fun in the sun: Malin struck a series of poses as she enjoyed her day by the pool, rocking a hot pink swimsuit

‘Thank-you for all of your messages, it’s been overwhelming – you guys have really followed my journey and I’m in awe of all of your support.

‘We are sending you all so much love,’ she signed off.

Malin went public with her new romance back in June last year, but rarely shares updates on her love life on her social media platforms. 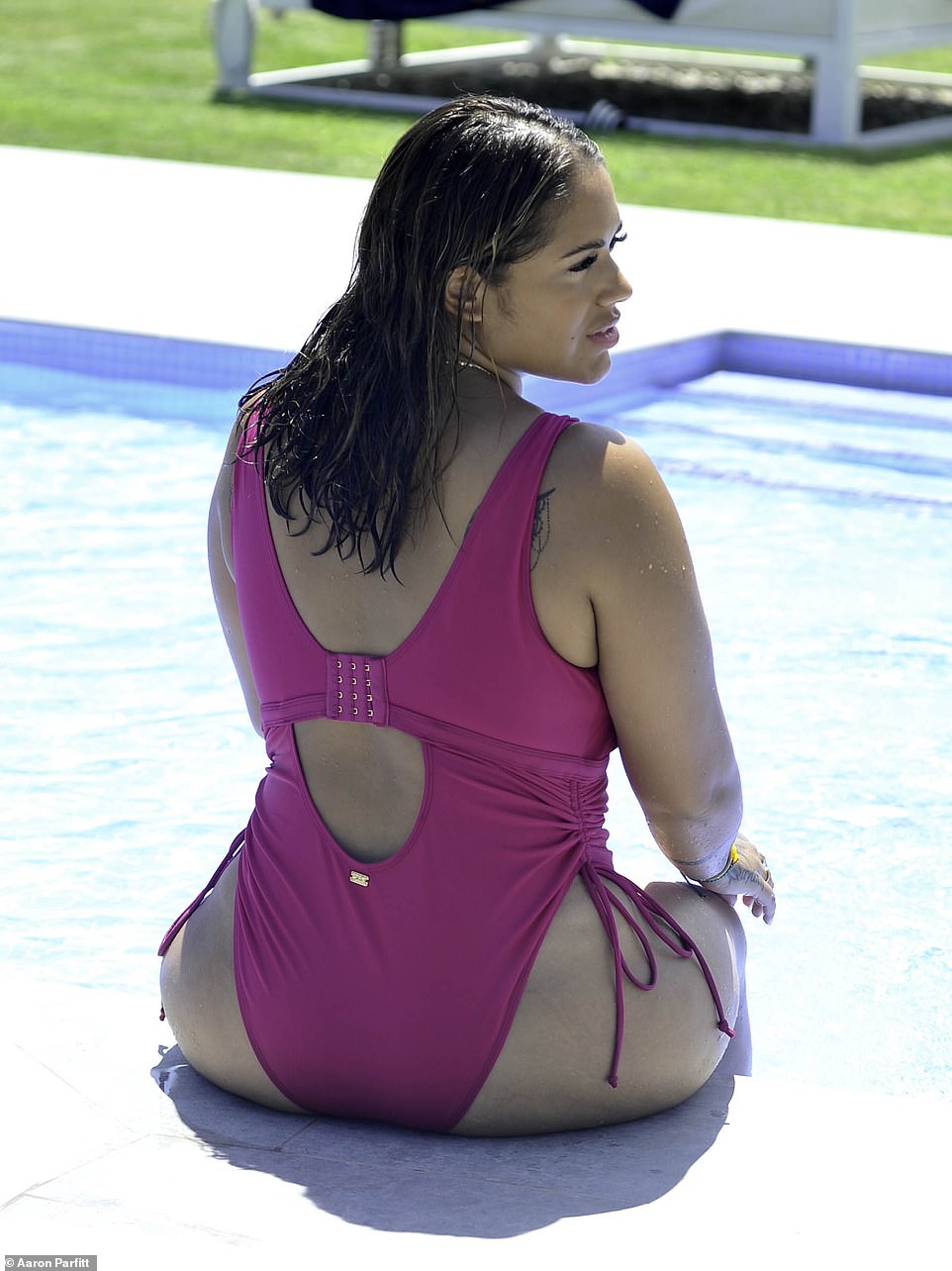 Vacation style: Malin flaunted her impressive physique in a magenta swimsuit as she enjoyed her sunny getaway

In August the reality personality announced that she was expecting a baby with her new beau, who was a close friend for years before their romance began.

The news came shortly after she also revealed she had suffered a miscarriage last year.

Malin announced her news by posting a sweet black and white image of herself and Jared cradling her pregnant stomach, alongside the caption: ‘My next chapter. My new beginning. My happy ending. My entire universe. All mine.’ 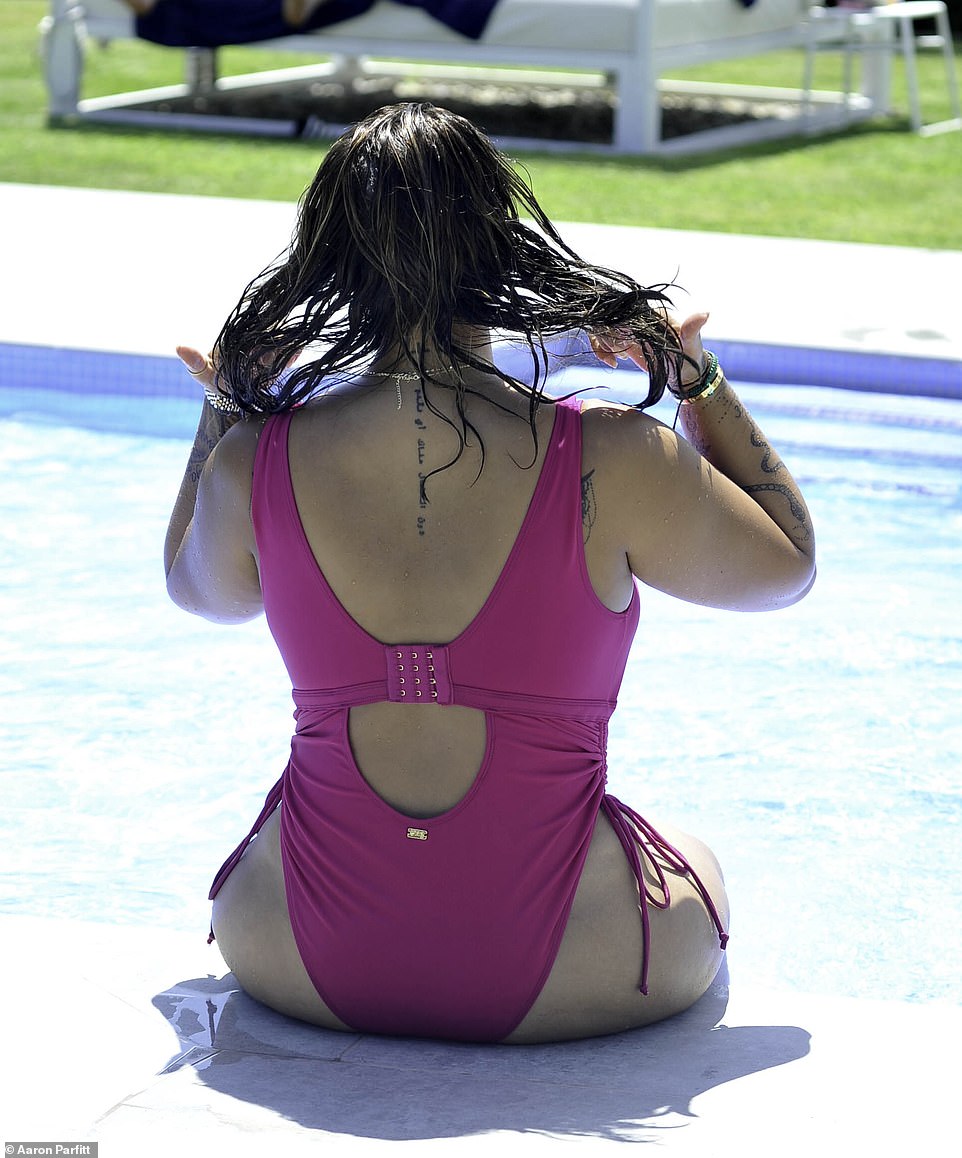 Inked up: The star’s swimsuit showed off her impressive collection of tattoos as she lounged by the pool 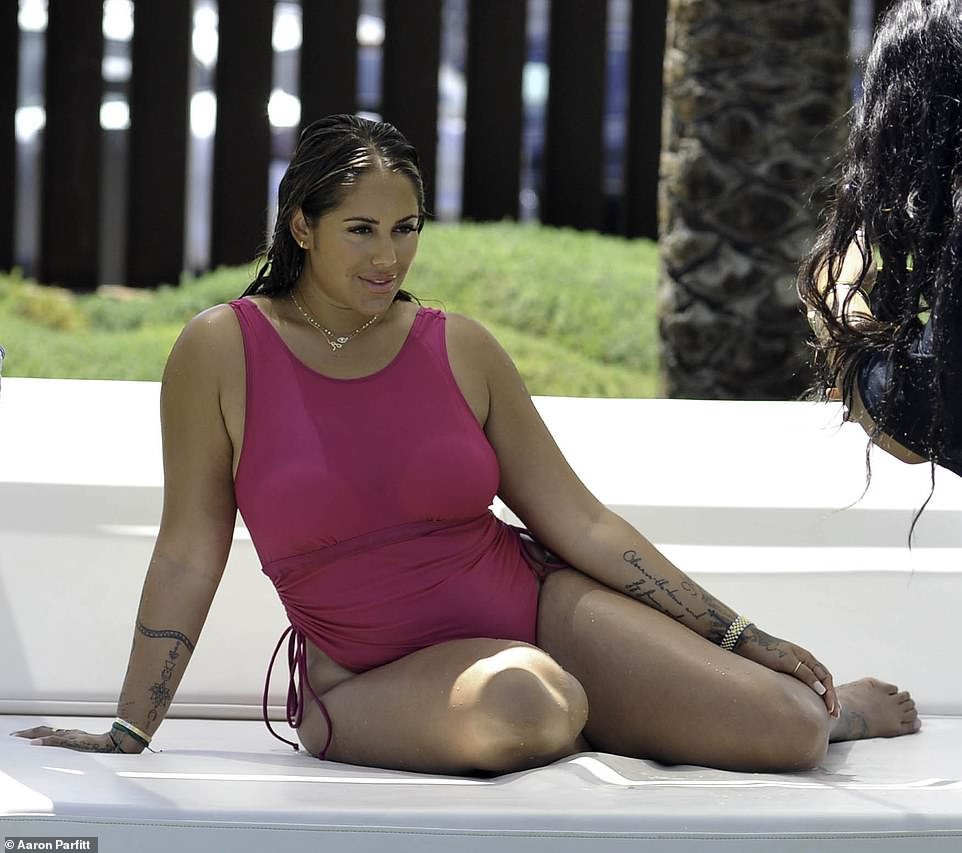 Splashing around: Malin relaxed by the sunbeds and enjoyed a dip in the pool as she soaked up the Spanish sun

A few months later, Malin threw a gender reveal party at her home where she shared the news that she was having a baby girl.

In March she announced her split from boyfriend Jared – just two months after giving birth to their daughter Xaya.

The Love Island star broke the news in a heartbreaking Instagram post, revealing the pair had gone their separate ways around five weeks after their daughter arrived on January 28. 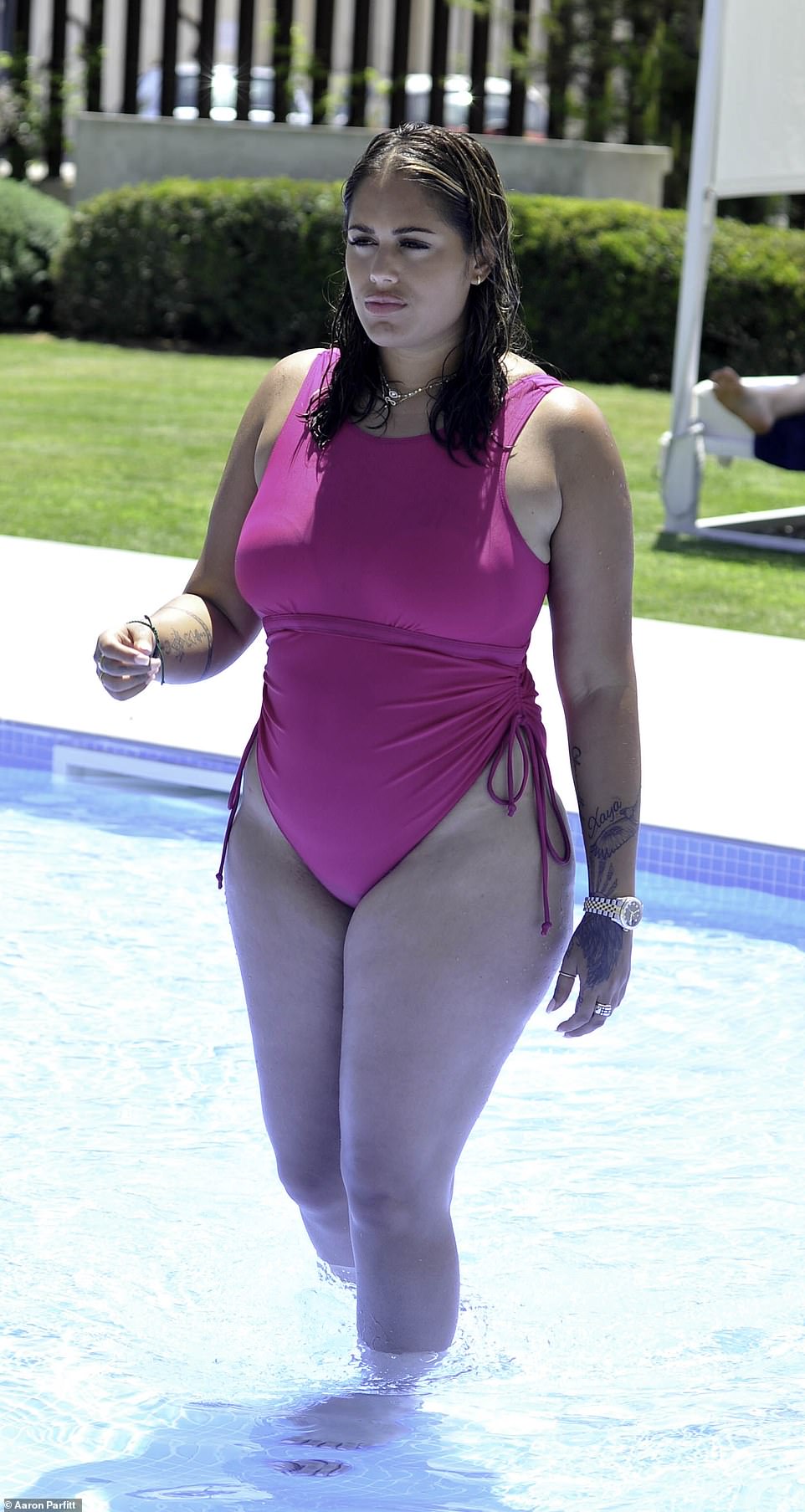 Dipping her toes in: Malin braved the water as she enjoyed a sunny poolside day in Palma on Tuesday 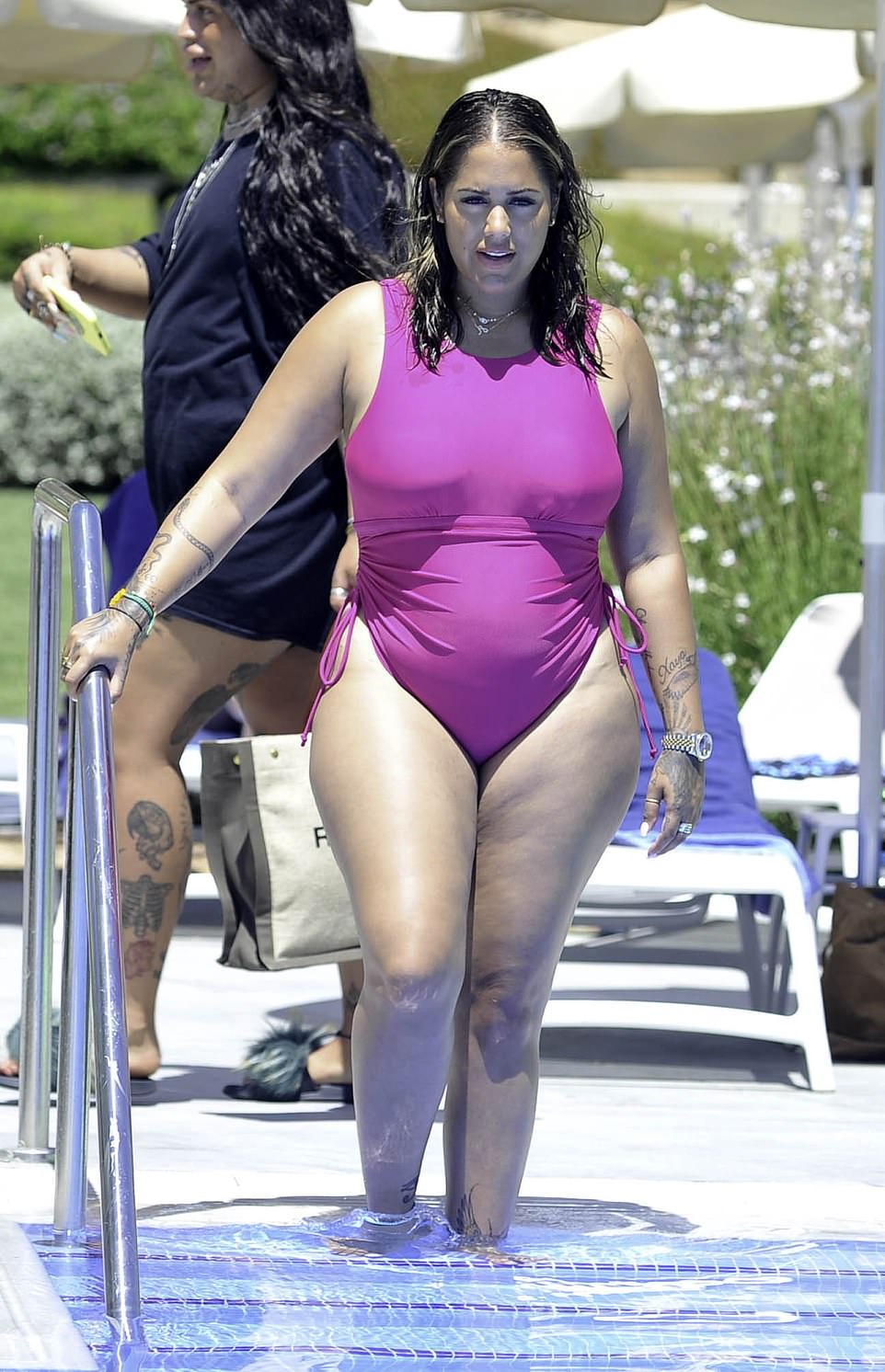 Stepping in: The star rocked a bright pink swimsuit, accessorising her poolside look with necklaces and bracelets 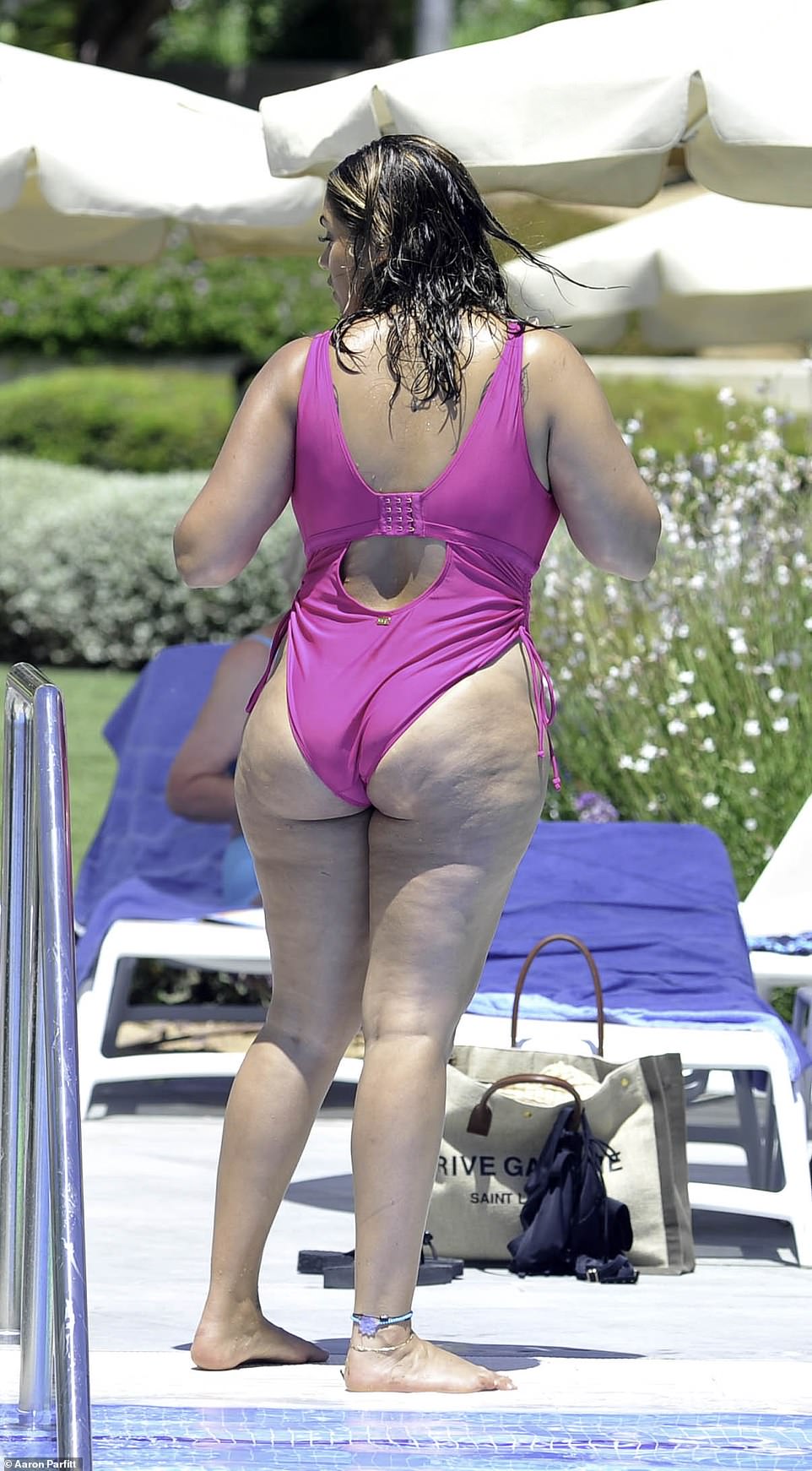 Poolside glam: Malin enjoyed a day at the pool with a hot pink swimsuit, donning some layered jewellery to accesorise her look

She wrote: ‘I have always prided myself on being open and transparent on here so I want to let you all know that myself and Jared are no longer together.

‘We split around four weeks ago and have since been trying to come to terms with everything and process it all.

‘We are co-parenting Xaya as she of course comes first in all of this but we would appreciate some space as we navigate through this separation.

‘I don’t want to go into more detail at the moment, my baby girl is my main priority and I am building myself back up with what fuels my strength – friends, family, exercise and meditation.

‘I didn’t expect any of this to happen, I feel truly blindsided… but as always, I trust the universe has a plan for me.’ 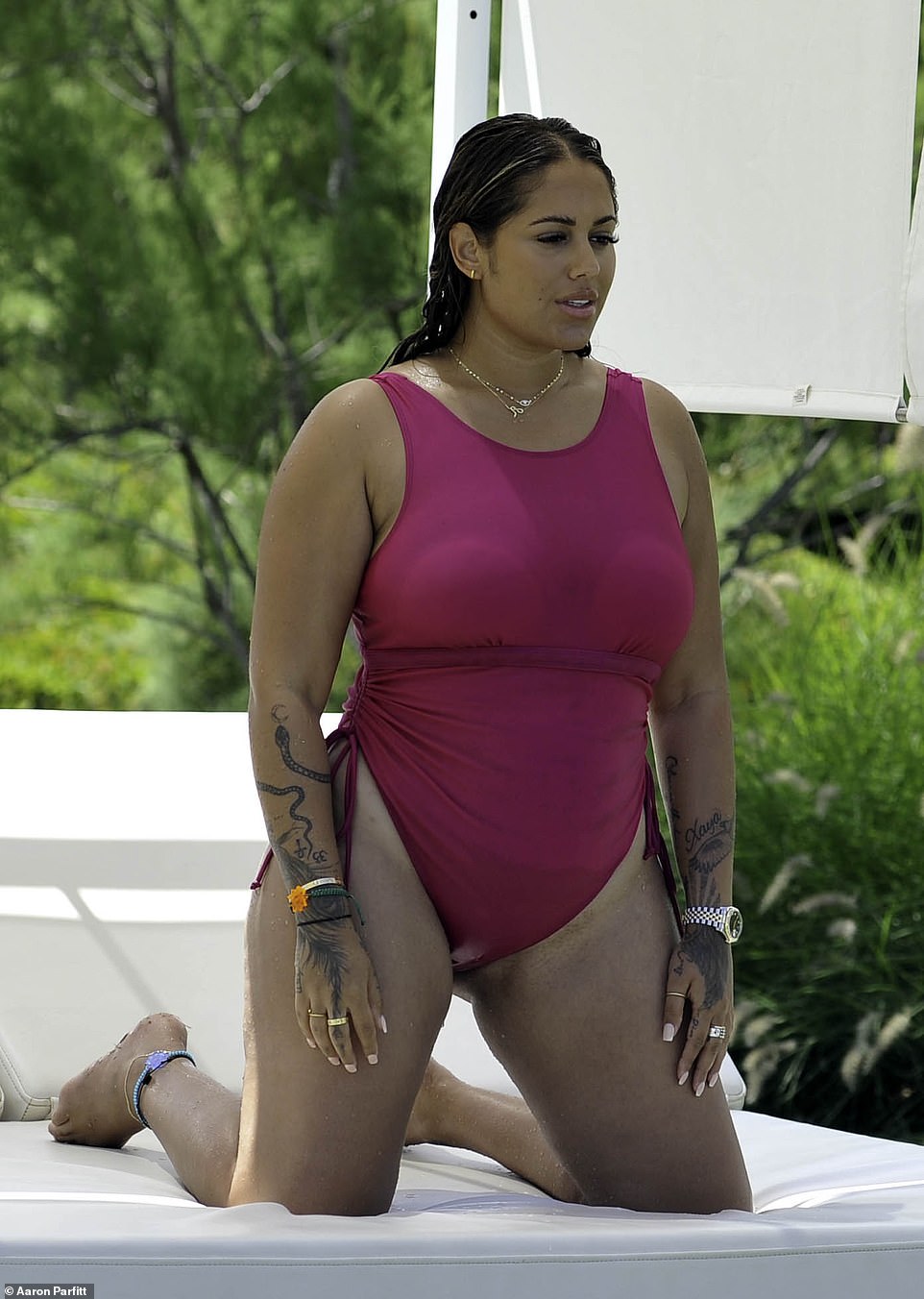 Wow: The stunner struck a series of poses by the sunbed and deck chairs as she showed off her poolside style 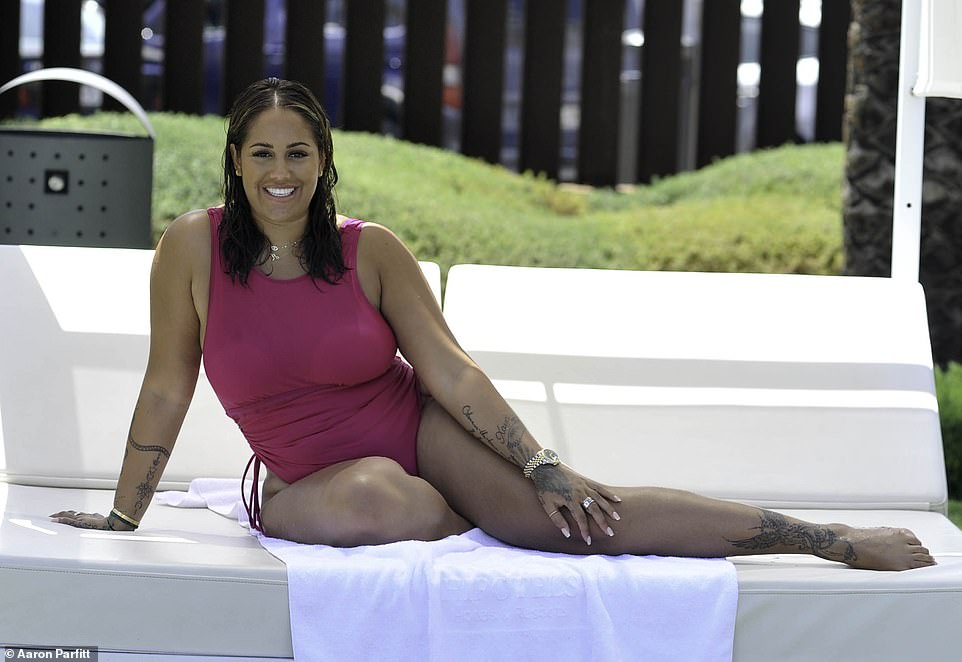 Sunny looks: The star appeared to enjoy her day in the sun as she showed off her body in a pink swimsuit, which provided the perfect complement to her Palma tan 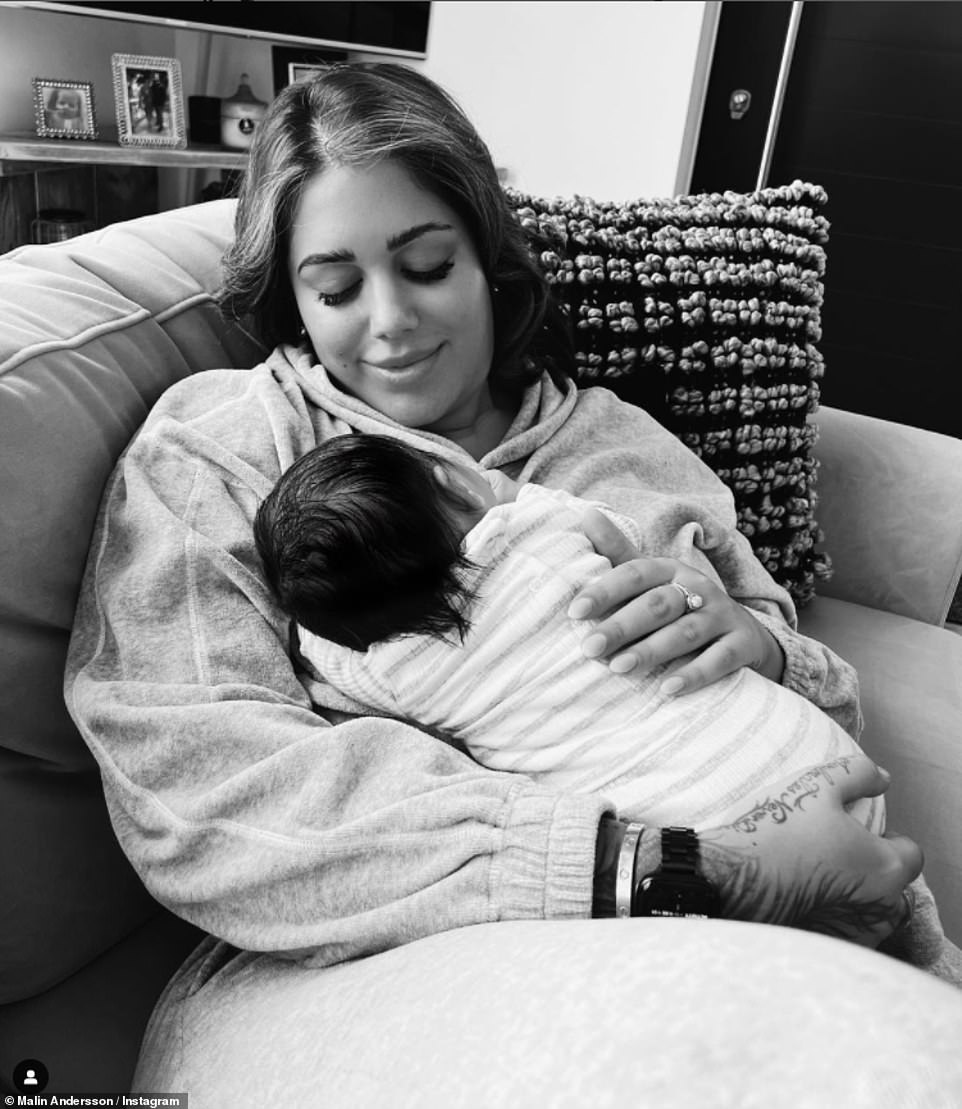 Adorable: Former Love Island Malin star had given birth to her daughter Xaya in January

Olly Murs breaks down in tears over Caroline Flack’s passing