Melanie Griffith was spotted enjoying a quick cigarette on Wednesday before visiting a friend’s home in Los Angeles.

The 64-year-old actress looked youthful and fit in a sleek black athleisure ensemble as she stepped out of her vehicle and paused for her smoke break.

Griffith seemed to be enjoying Southern California’s warmer weather after returning from her holiday trip to Aspen, Colorado, where she had been spotted catching up with her longtime friend Goldie Hawn. 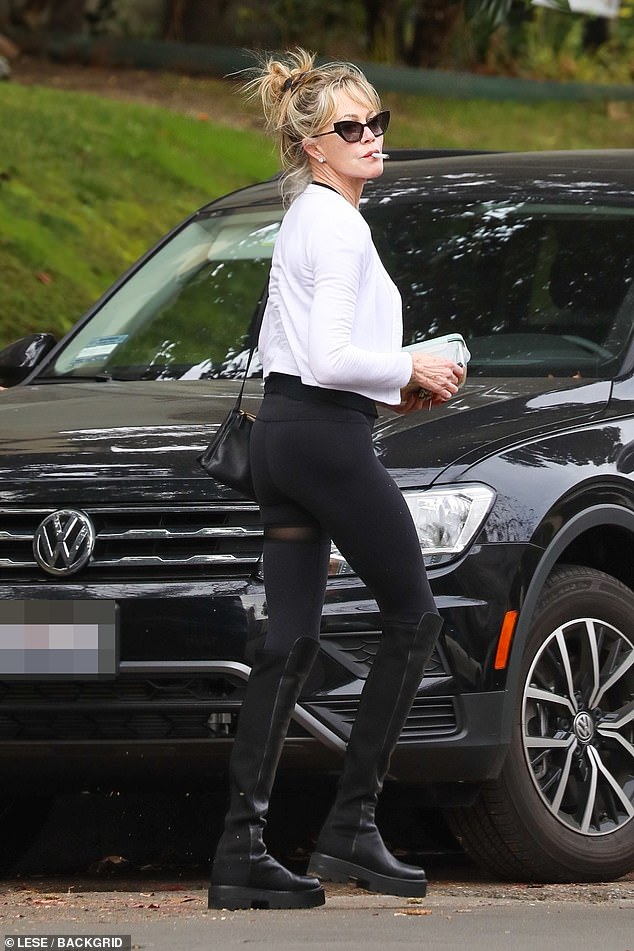 Smoke break: Melanie Griffith, 64, was spotted taking a puff on a cigarette on Wednesday before she went to visit a friend in Los Angeles

Melanie put on a busty display in her low-cut black tank top, and she looked as fit as ever with her slim black leggings.

She added a cool touch with knee-high black platform boots, and she lighted up the dark look with a white cardigan.

The Night Moves actress accessorized with a black handbag and large cat-eye sunglasses, and she had her blond hair tied up in a playfully messy bun.

She found a clever solution for misplaced face coverings by attaching a glasses chain to her black disposable mask so that it hung down from her neck. 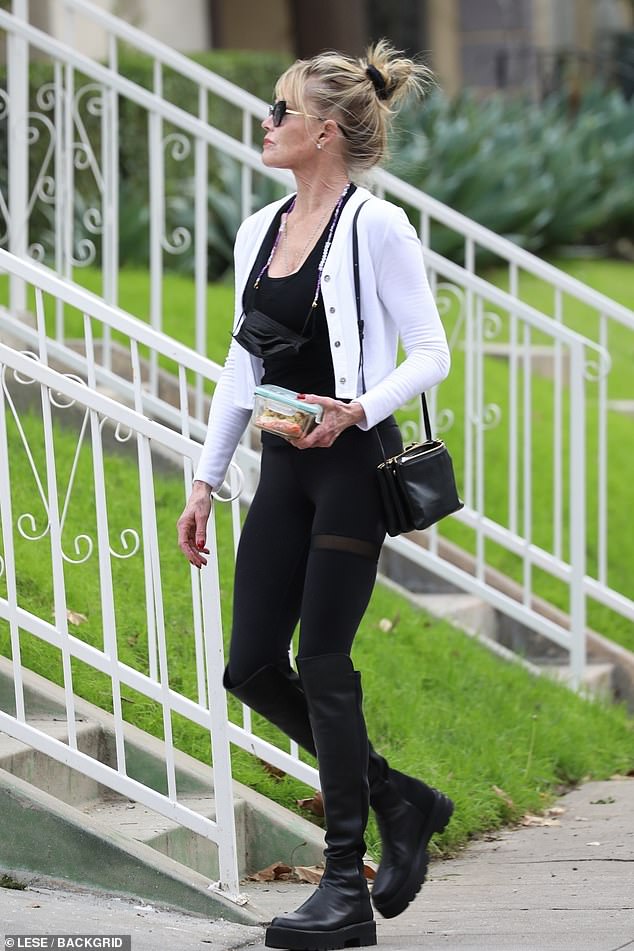 Back in black: Melanie put on a busty display in her low-cut black tank top, and she looked as fit as ever with her slim black leggings, culminating in knee-high black platform boots 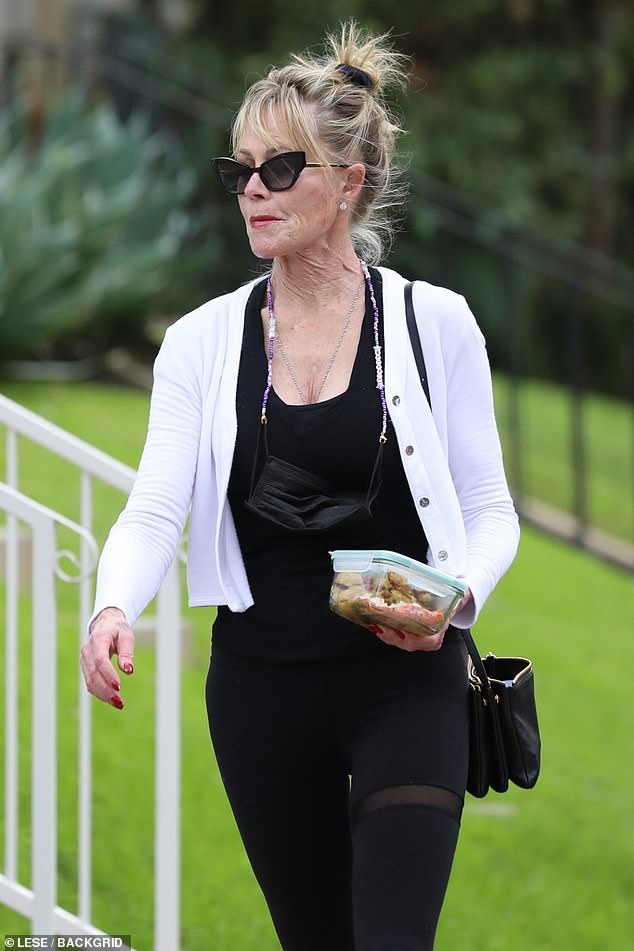 Contrast: She wore a white cardigan with the sporty look and black cat-eye sunglasses. The Night Moves star appeared to have some leftovers to bring to her friend

Melanie appeared to have either prepare some food for her friend or brought along leftovers, as she carried along a glass container full of food.

While Melanie hasn’t made an acting appearances since 2020, she has lately been spreading the word about her daughter Dakota Johnson’s acclaimed new film The Lost Daughter, which is now available to stream on Netflix.

The film, which marks Maggie Gyllenhaal’s feature directorial debut, stars Johnson with Olivia Colman and Jessie Buckley, and is based on the acclaimed Elena Ferrante novel of the same name.

All three actresses have been the subject of critical acclaim for their performances in the drama, and the movie currently holds an impressive 96 percent fresh rating on Rotten Tomatoes. 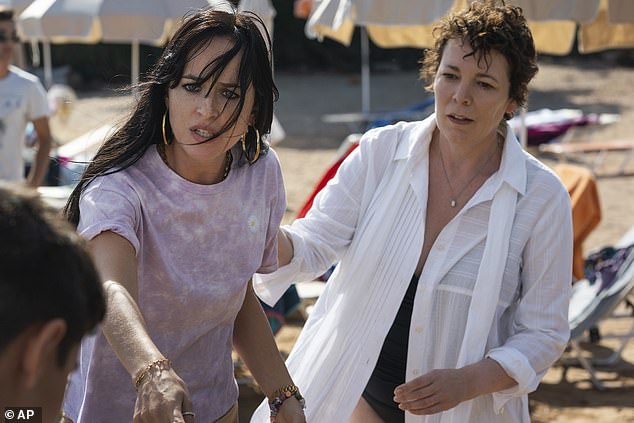 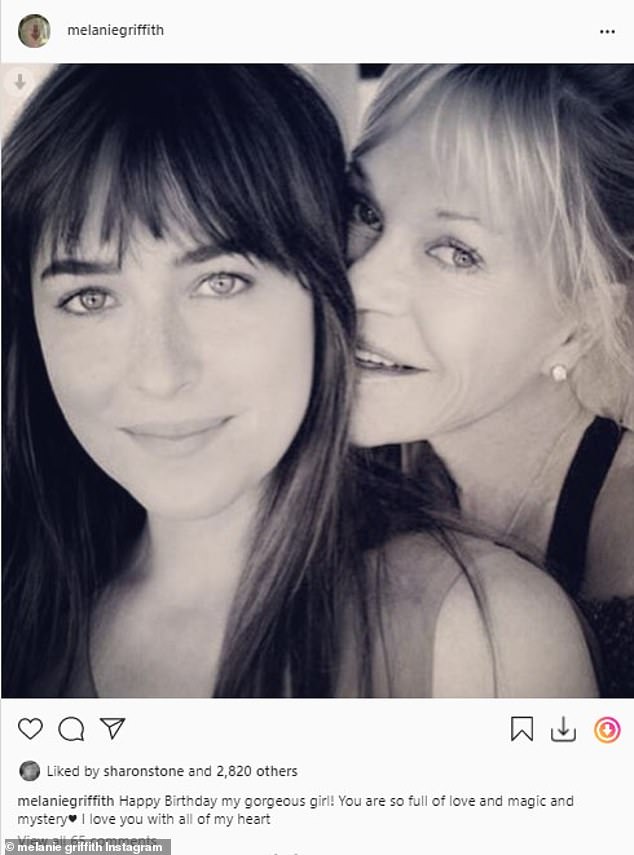 ‘This extraordinary film, this work of art, is on Netflix today,’ Melanie announced on New Year’s Eve, as she shared a trailer for The Lost Daughter to her Instagram account. ‘@m,gyllenhaal gives us a film to remember. My daughter @dakotajohnson, Olivia Coleman, Jessie Buckley and the rest of the cast are magical ♥️.’

Her last role was in the narrative podcast Dirty Diana, which starred Demi Moore as a woman secretly running a website in which women could secretly post about their sexual fantasies and desires.

Prior to that, she had a small role in her daughter Dakota’s film The High Note, which was released in 2020.

Leah Remini talks attending NYU at 51, reflects on how Scientology forced her to grow up too soon

Hamish Blake profusely thanks Ray Hadley for ‘saving’ his children