Myleene Klass was modelling one of her dresses from her own high-street collection with Next on Monday as she headed to work at Smooth FM radio,

The mother-of-three, 44, looked incredible in the double animal print satin slip as she headed out after her recent holiday at an unknown destination.

Myleene dressed down the outfit wearing heeled ankle boots and an oversized hat and sunglasses. 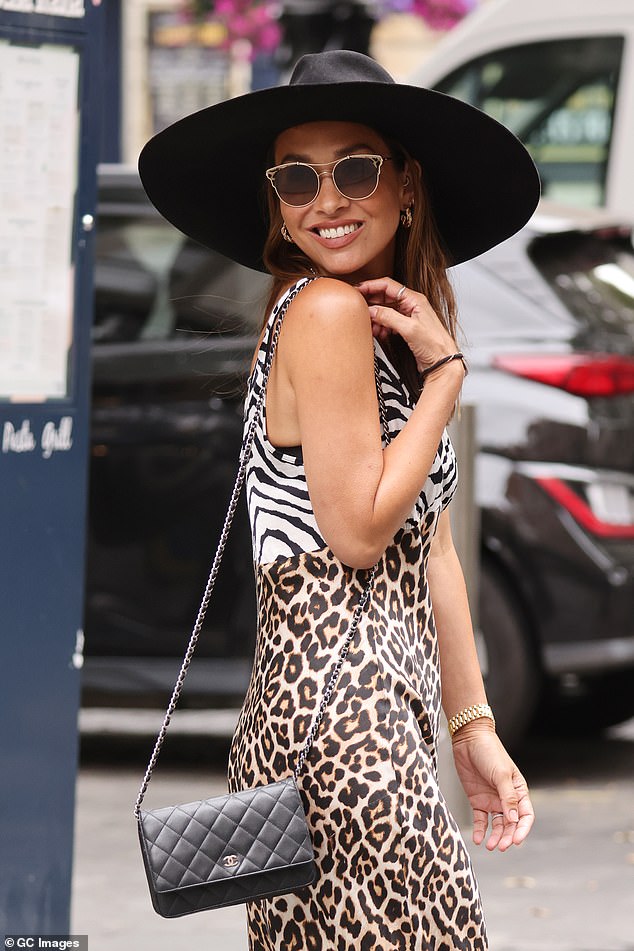 She also wore a Chanel WOC bag which she wore on one shoulder and oversized sunglasses.

Myleene has previously shared details of the £45 outfit on Instagram, writing: ‘The dress of DREAMS. 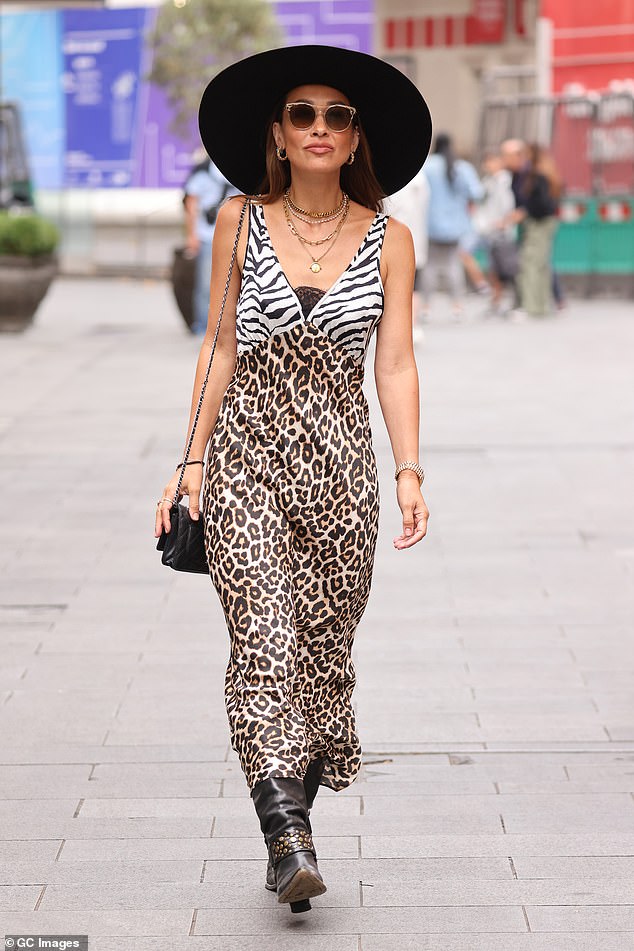 Her own work: Myleene has previously shared details of the £45 outfit on Instagram, writing: ‘The dress of DREAMS 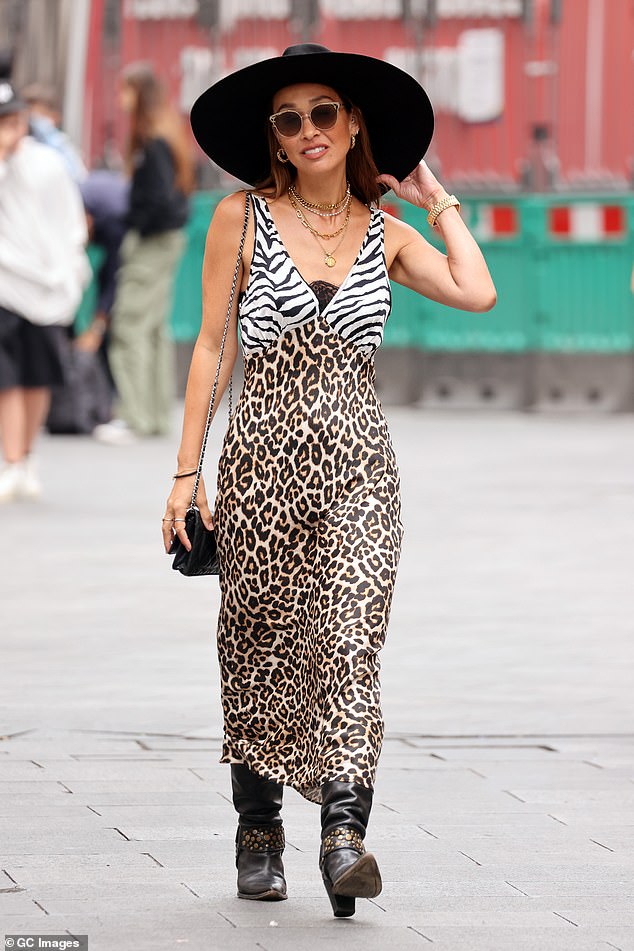 Mix and match: Myleene dressed down the outfit wearing heeled ankle boots and an oversized hat and sunglasses

Myleene has used her trip away to her own advantage, modelling swimsuits and bikinis from the collection and posting pictures on social media.

During her trip, she has been teaching her son Apollo, two, with Simon Motson, to swim in the outdoor pool.

Myleene is also mother to Ava, 14, and Hero, 11, from her past marriage to Graham Quinn.

Myleene revealed earlier this month that she has recorded a lullaby album with her musically-gifted children. 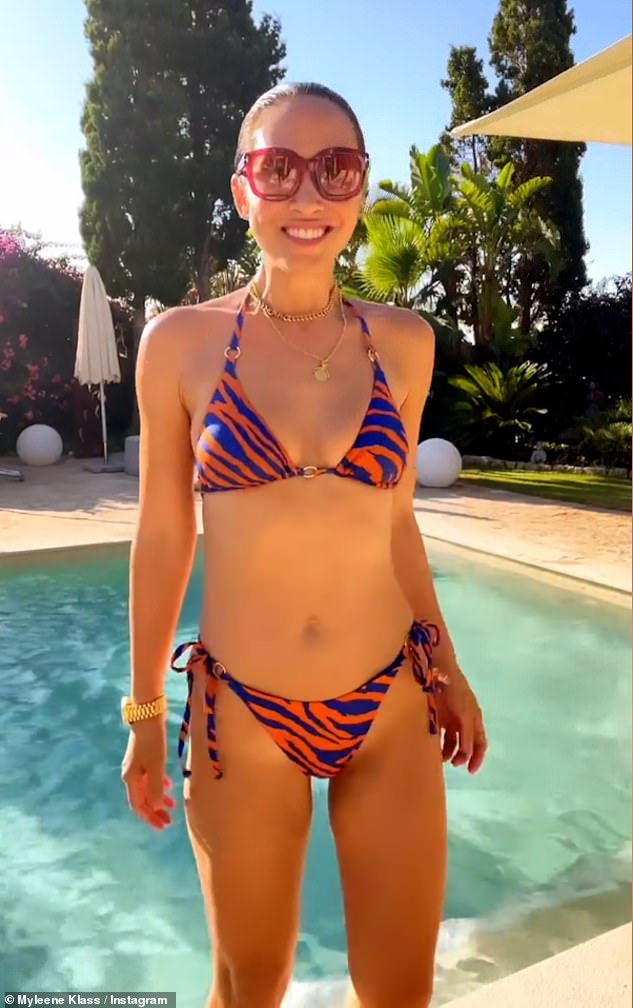 Poolside: Myleene looked sensational as she displayed her jaw-dropping figure in a blue and orange zebra print bikini from her range for her reel while away

The album titled My Lullabies: Motown is a collection of 13 re-interpreted classic tracks, including Stevie Wonder’s My Cherie Amour and My Girl by The Temptations.

Myleene told HELLO! magazine: ‘They’re my girls. We’re the Klass girls, that’s how we see ourselves.

‘It’s been a phenomenal collaboration and I’ve got my own band.’

Myleene revealed she has dedicated song What Becomes Of The Brokenhearted on the album to all of her ‘angel babies’, having suffered four miscarriages. 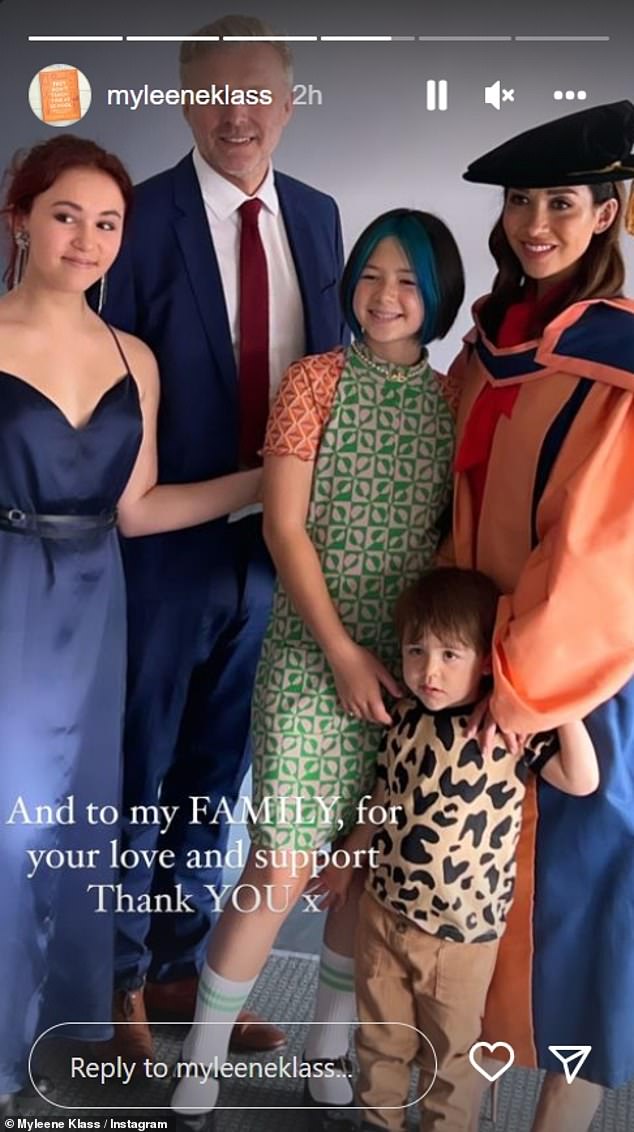 Family: The singer was joined by her partner Simon Motson, their son Apollo, two, and her daughters Ava and Hero on her trip (stock image)

Patsy Palmer celebrates her 49th birthday at home in Malibu

Channel Nine apologises for ‘concern or distress’ caused by MAFS