She included a picture of Holland in a stylish ensemble as they sat at what appeared to be a restaurant table with a dazzling city view.

‘Love of my life. The one. The only one,’ wrote Sarah, who has been involved with Holland since at least 2015. 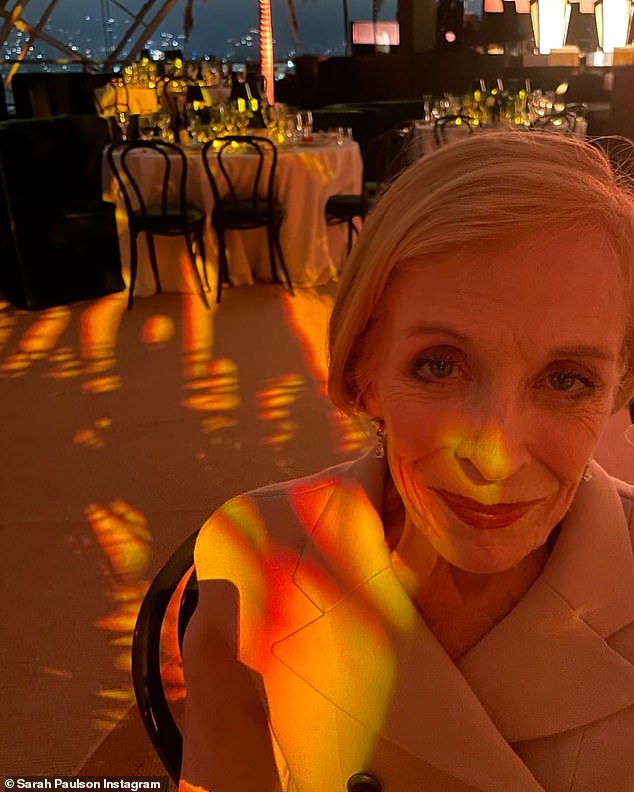 ‘Love of my life’: Sarah Paulson, 47, wished her longtime girlfriend Holland Taylor a happy 79th birthday on Instagram this Friday

‘January 14th is my favorite day of the year- a day to unabashedly celebrate you @hollandvtaylor,’ Sarah continued.

‘I am the luckiest of the lucky. I love you only. Happy Birthday magical poet darling,’ she concluded, adding a double-heart emoji for good measure.

She also took the show to her Insta Stories, calling Holland a ‘Birthday beach babe’ over a picture of her enjoying a seaside stroll in a knit cardigan. 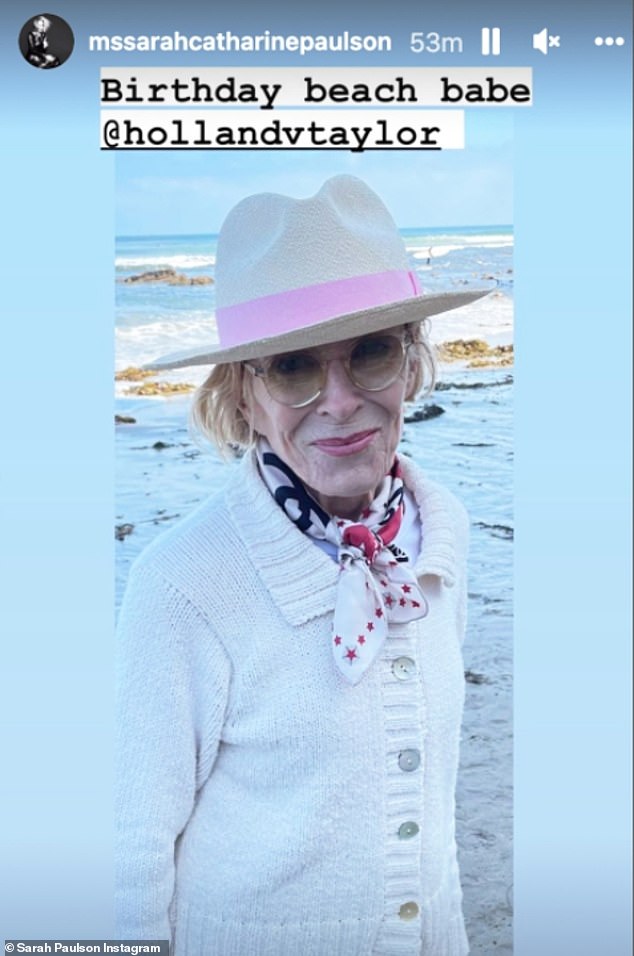 By the sea: She also took the show to her Insta Stories, calling Holland a ‘Birthday beach babe’ over a picture of her enjoying a seaside stroll in a knit cardigan

Her current relationship first hit the headlines in 2015 and was the first time that Holland had ever been an open item with another woman.

‘The relationship was with Sarah became so public because she’s an enormous star and I was somewhat well-known. It became a news event and so I wasn’t going to deny it,’ Holland shared in a podcast interview for The Advocate.

‘Well, I’m a very private person, just generally. I would be no matter what my life was, but I was not private in the sense of hiding. I lived my life in public,’ said she.

‘I think I was about 29 or 30 when I had my first relationship with a woman, but I didn’t talk about it per se. It would never have occurred to me to talk about my personal life in an interview anyway,’ recalled Holland. 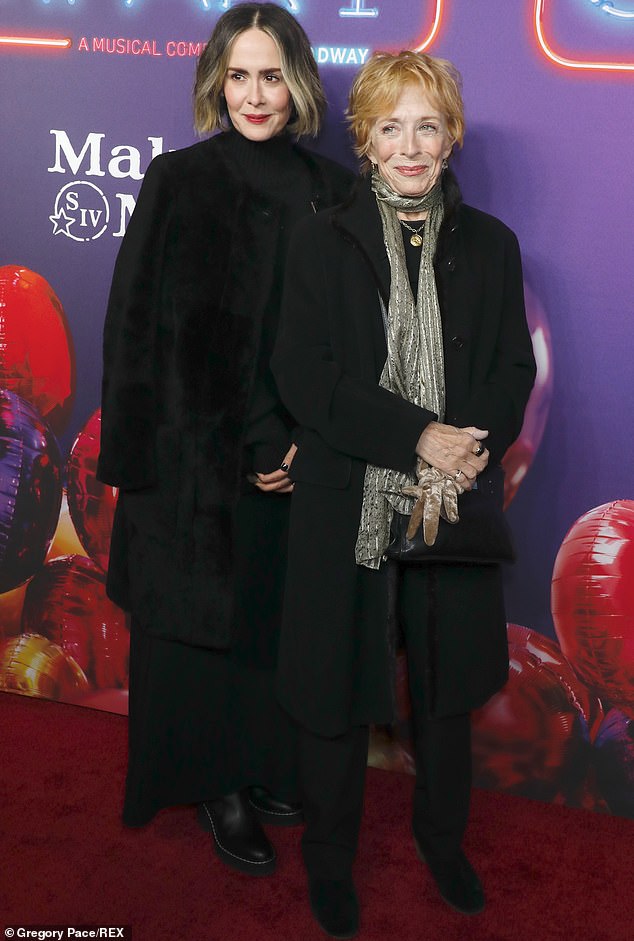 Side by side: Their relationship first hit the headlines in 2015; they are pictured last month attending the opening night of the new gender-flipped Broadway revival of Company

Their relationship has turned heads for the fact that Sarah is more than three whole decades younger than Holland.

Holland shared: ‘Other relationships that I had have not been with famous people. No other relationship I had would become a news event in that sense. When once that happened, there was no way not to just speak about it.’

She also reflected that before Sarah, when it came to her sexuality generally, ‘I was not asked and I would not have offered in all likelihood, certainly.’

Holland explained: ‘I mean, I’m more free talking about my personal life now because people do speak very personally in interviews. But when I was younger, I didn’t have a big public marriage or relationship with children and a big public life. I just lived my life normally. I wasn’t behind closed doors.’ 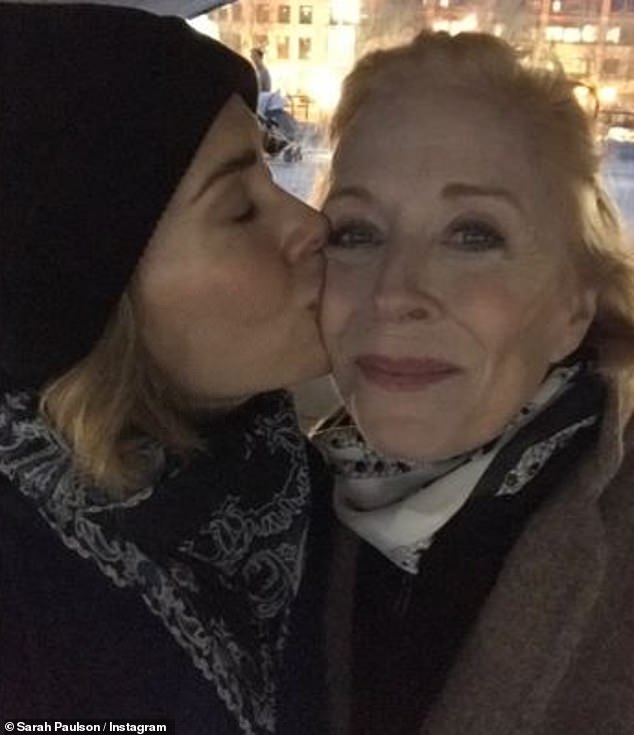 First sight: Sarah once told the New York Times that when they were introduced at a dinner party she thought Holland was ‘probably the most exquisitely beautiful woman I’d ever seen’

Sarah first publicly discussed the romance in the New York Times in March 2016, telling the paper that when they were first introduced at a dinner party she thought Holland was ‘probably the most exquisitely beautiful woman I’d ever seen.’

That September she won an Emmy for playing O.J. Simpson prosecutor Marcia Clark and told Holland she loved her from the stage.

She told The Edit of the speech: ‘It occurred to me, should I not do that? And then I thought, why would I not?’

Sarah continued: ‘The fact I’m having this thought is wrong. But I had a moment of societal concern; wondering if, maybe, people who didn’t know that about me would be like, wait, what? But then, you know, I did it anyway.’

Ray Liotta once turned down role in The Sopranos series: ‘I didn’t want to do another mafia thing’