The Made in Chelsea star, 28, appeared on the show with Jamie, 33, to discuss their upcoming wedding, which she revealed will take place next May.

When Richard Madeley asked when their wedding would take place, Sophie immediately answered: ‘May 19th’. 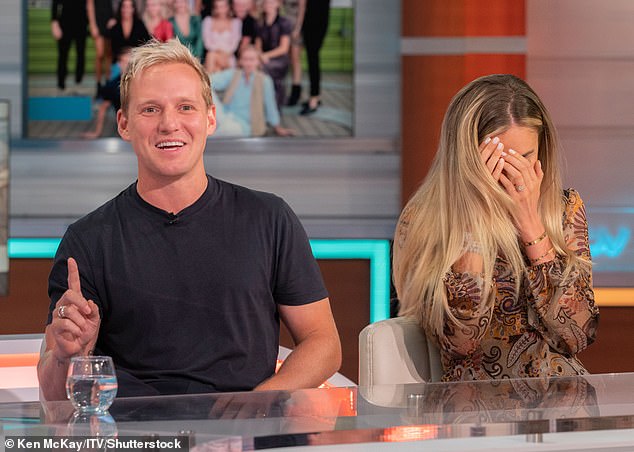 A shocked Jamie responded by saying: ‘I can’t believe you just did that! You told me off on the podcast for wanting to say the date and now you just said it…’

Richard chimed in to joke: ‘The wedding’s off!

Jamie quipped: ‘We’re over, we’re over!’ 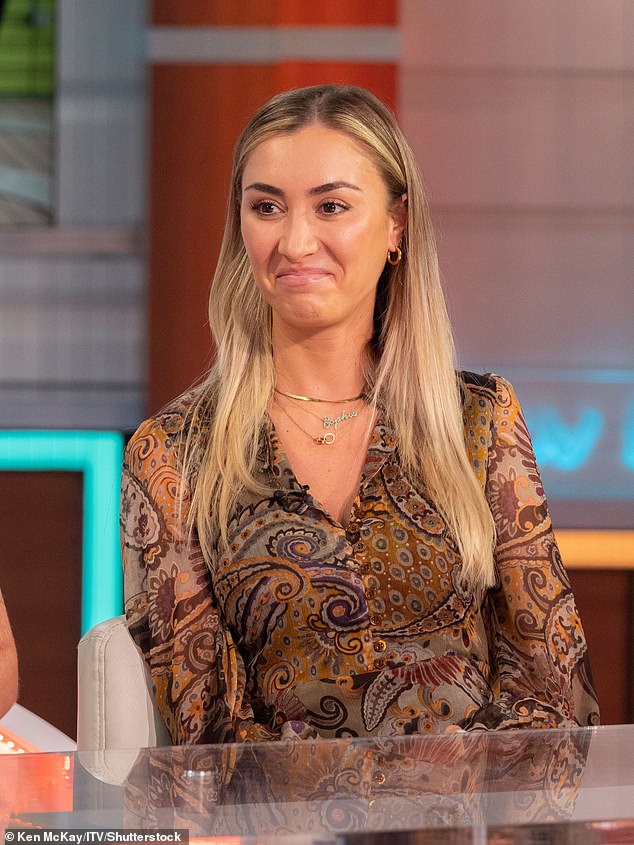 Accident: The Made in Chelsea star, 28, appeared on the show with Jamie to discuss their upcoming wedding, which she revealed will take place next May

Elsewhere in the chat, Sophie revealed that Jamie was the more stressed one when it came to planning.

She said: ‘You’ve become a groomzilla, I’ve been a calm bride’.

She revealed that she hasn’t yet seen her dress or tried it on, as its being made especially for her.

Jamie asked Sophie to marry him in December with handwritten letters at London’s luxury Rosewood hotel – but the intimate moment was almost ruined when nearby candles came close to setting Sophie on fire. 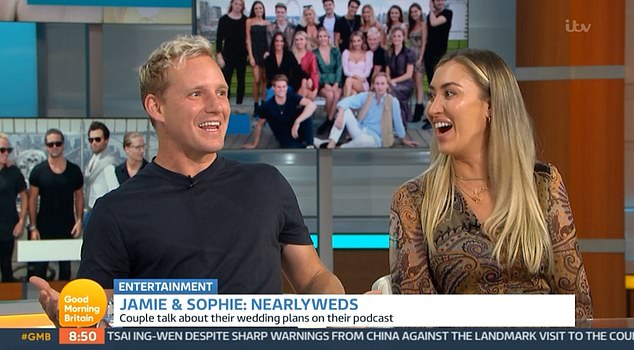 Speaking on Made in Chelsea, Sophie explained: ‘Basically he was in the Rosewood, which is where we sort of had our first proper date, and he was like calm, we could just spend the night there, and I was like ‘okay, fun’ and then I knocked and he opened the door and he like ran, opened it, and he said ‘read the letters’ and he ran away. Music was playing…

Her co-star Ruby Adler added: ‘Did you know straight away?’

Sophie continued: ‘I knew… literally my eyes were like… and I knocked all the candles over so there was wax everywhere, all over my bag, all over my trainers, I was like “oh shoot”… I was reading all the letters and crying, crying…

‘He basically said “I want to spend my life with you” and then I walked round and he was on one knee.’ 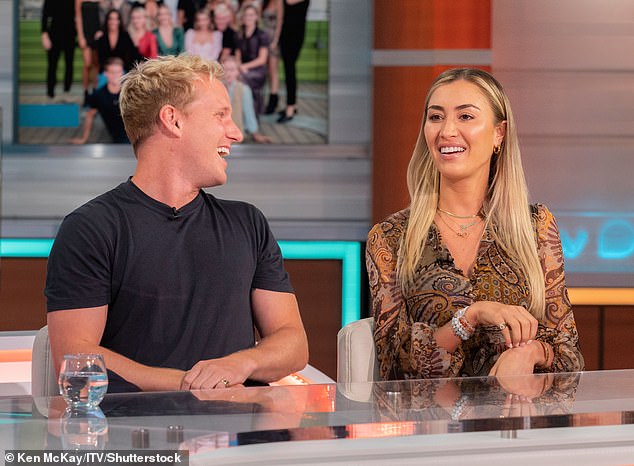 ‘Groomzilla’: Elsewhere in the chat, Sophie revealed that Jamie was the more stressed one when it came to planning

Sophie previously revealed: ‘The wedding is going to be next year, hopefully in April/May. It’s really stressful planning everything.

‘As yet we haven’t found a venue but I want it to be abroad. We have looked at Seville because my dad lives in Spain and I’ve been there a lot but it wasn’t quite right.

‘It could be Majorca, Ibiza, we were thinking Cape Town but we decided against it.’

Jamie added: ‘We have a guest list and it’s a huge 220 people, which for an overseas wedding is big. Spencer, Hugo, Proudlock, Mytton, are all coming, we all grew up together, Millie, Caggie, it’s an old school reunion. 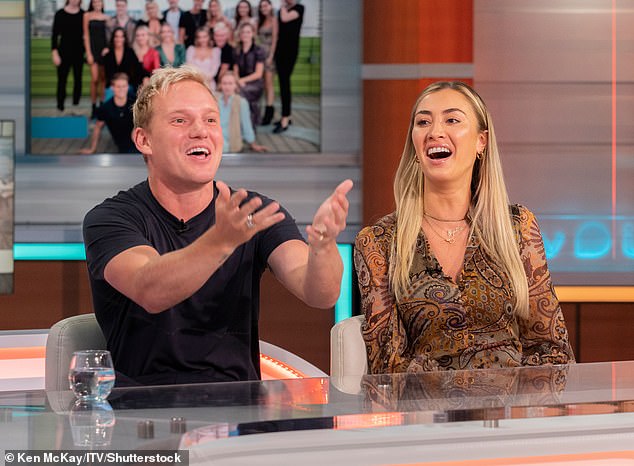 Custom-made: She revealed that she hasn’t yet seen her dress or tried it on, as its being made especially for her

‘We’re planning on getting married together in a registry office in Chelsea and then have the wedding and do our vows.’

It comes after Jamie vowed that he’s ‘done’ with reality TV because he wants to protect his future marriage.

He added: ‘I left Made In Chelsea because I didn’t want my relationship with Sophie on camera. There were lots of other reasons but that was the big one.

‘I’ve seen so many relationships fail on reality TV shows, and I didn’t want that to happen.

‘Relationships on TV shows are difficult because of the constant need for content. Relationships can be mundane, and you feel the need to make things interesting, so everything becomes more exaggerated and that’s tough.’

She said: ‘I have found the dress. I am currently getting sketches back for my evening dress too. If I could have three dresses I would!

‘I tried on a big Cinderella gown, and I loved it and my bridesmaids loved them all on me, but my dress isn’t like that… My bridesmaids are my best friends Chrissy, and Bella, Melissa [Tattam], who’s on Made In Chelsea, and my sister, Georgia.’

Jamie added: ‘Spencer [Matthews] is going to be master of ceremony and I’m having three best men. I think I’m going to do Nashville for my stag. Nashville is the new Vegas.

‘It will be one last hoorah, everything goes, but I don’t want to wear T-shirts saying ‘lads’ on tour.’ I’ll be tired after day one. I bet Sophie will have male strippers… 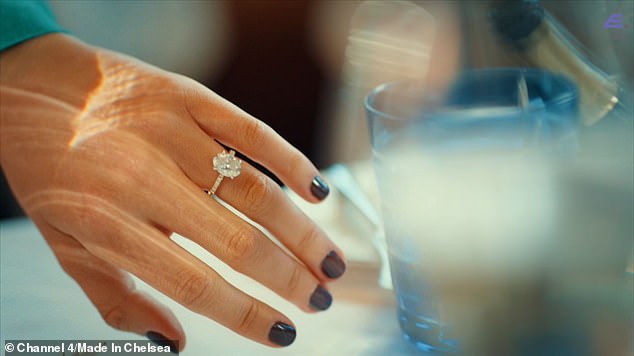 ‘I was crying’: Sophie showed off the sparkler to her co-stars, while revealing that former Strictly finalist Jamie declared: ‘I want to spend my life with you’ as he popped the question

Deadly duel for the life of the first MeToo Martyr