Tammy Hembrow says that her ‘vagina hurts’ and that she’s lost track of time since welcoming her third child on Sunday.

The fitness influencer, 28, gave birth to daughter Posy on Sunday, who she shares with fiancé Matt Poole.

In a candid confession about her post-partum body, Tammy revealed that she’s in a lot of pain after welcoming the little girl. 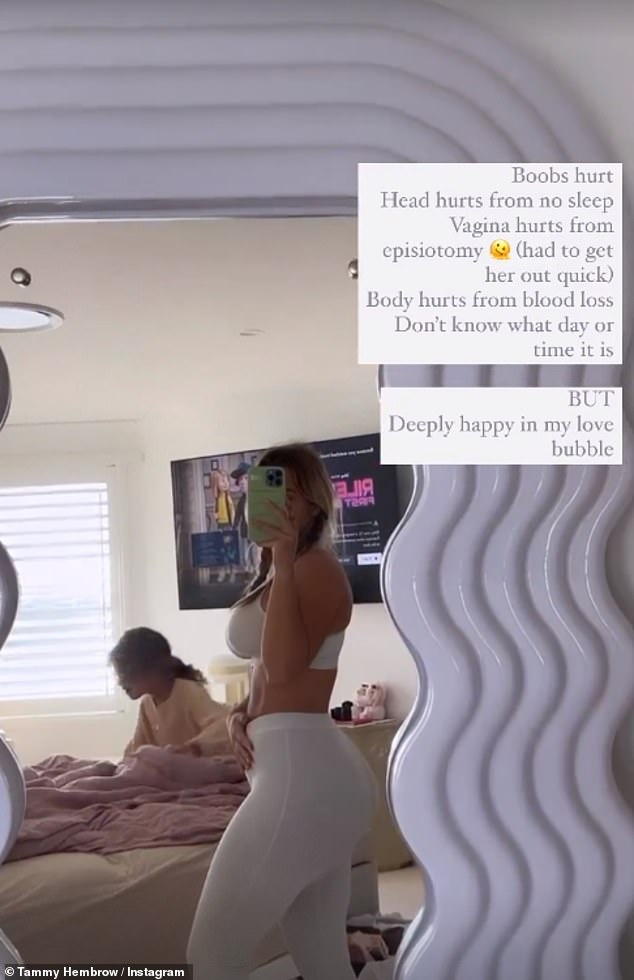 ‘Boobs hurt. Head hurts from no sleep. Vagina hurts from episiotomy (had to get her out quick),’ she wrote as she posed in a matching white leggings and sports bra set.

‘Body hurts from blood loss. Don’t know what time of day it is. But, deeply happy in my love bubble,’ she added.

An episiotomy is a surgical incision of the perineum and the posterior vaginal wall performed by a midwife during second stage of labour to enlarge the opening for the baby to pass through. 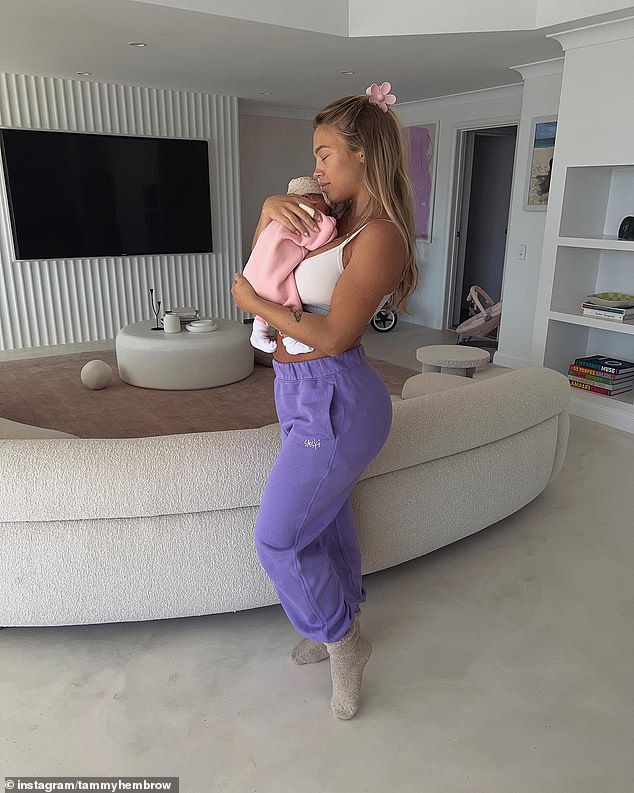 After spending a few days bonding at home with her newborn daughter, Tammy publicly revealed that she’d named her daughter Posy

In the video, the mum-of-three showed off her well-toned body in white leggings with a matching sports bra.

She opted for no make-up and tied her hair into two plaits as she twisted in front of a mirror while her daughter ran around behind her.

In the clip, she rubbed her hand over her stomach and breasts, showing where her aches are coming from. 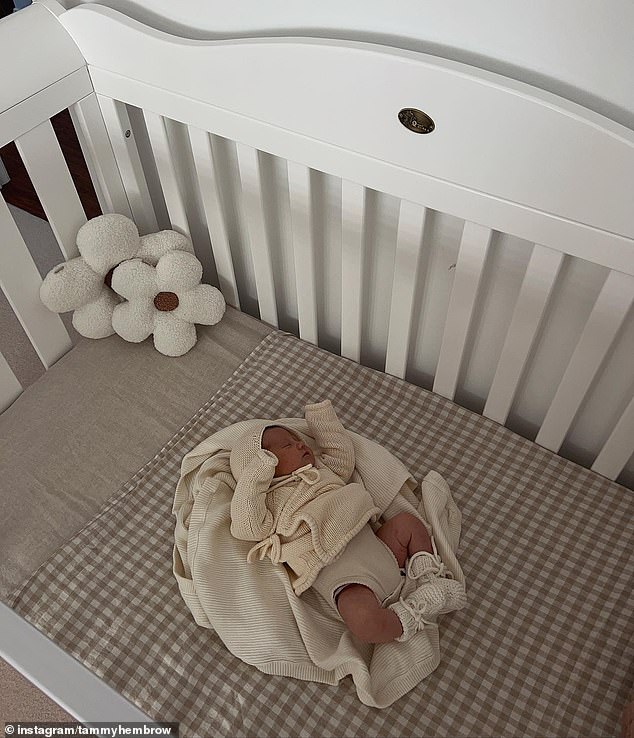 The fitness influencer, 28, shared her daughter’s floral-inspired name on Instagram on Thursday, alongside a cute photo of the infant sleeping in her cot

On Thursday, the influencer revealed she named her little one Posy.

She shared her daughter’s floral-inspired name on Instagram alongside a cute photo of the infant sleeping in her cot.

Matt also posted a photo of his baby daughter, captioning it: ‘POSY POOLE.’

Tammy revealed on Sunday morning she’d given birth to a ‘perfect little girl’.

She posted a series of photos to Instagram of herself in the hospital surrounded by Matt and her sisters Emilee and Amy.

‘The absolute hardest yet most rewarding thing I’ve ever done. An unmedicated VBA2C [vaginal birth after two C-sections]. No words,’ she wrote.

‘Birth story to come. For now just resting in my love bubble with my perfect little girl wow.’ 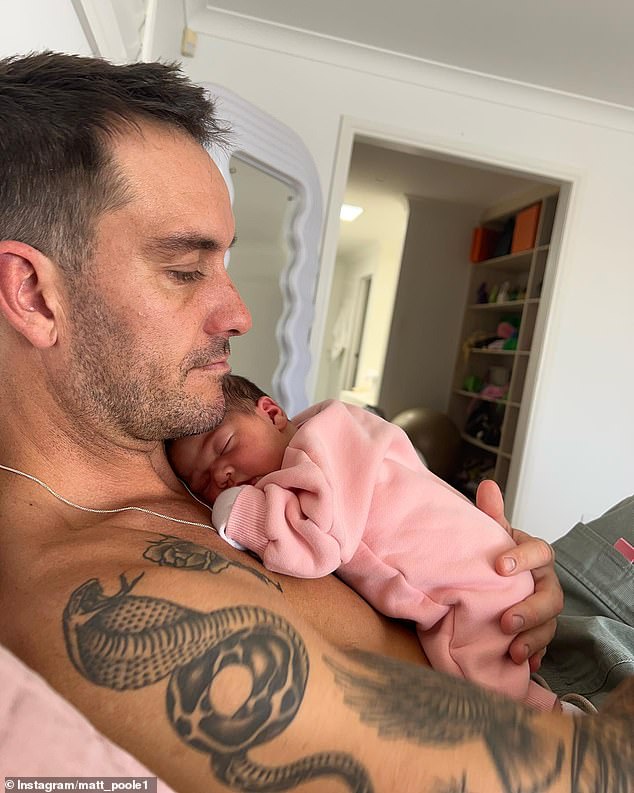 Matt also shared the exciting news on his Instagram account, writing: ‘Our little girl, perfect in every way.

‘Mum was incredible and so strong. It’s been a roller coaster twenty four hours but welcoming her into the world has made everything better.’

‘She’s beautiful, 12 fingers and all,’ he added, referring to his daughter’s rare mutation called polydactylism.

Tammy was also born with 12 fingers, and had two removed shortly after she was born. 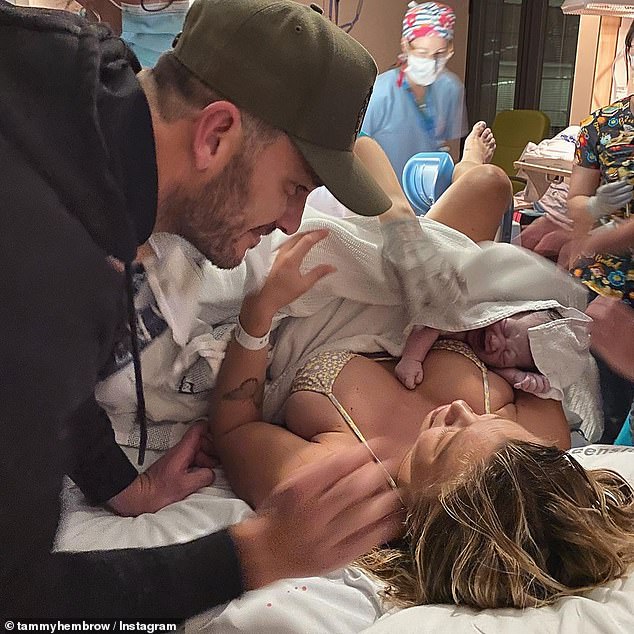