Yolanda Hadid has made a grand return to social media and uploaded an endearing Instagram post to announce the end of her ‘detox.’

The mom of three, 58, typed out a list of reasons as to what prompted her hiatus, including focusing on both her mental and physical health.

The former model detailed her struggles with depression following her mother’s passing and her battle with Lyme disease. 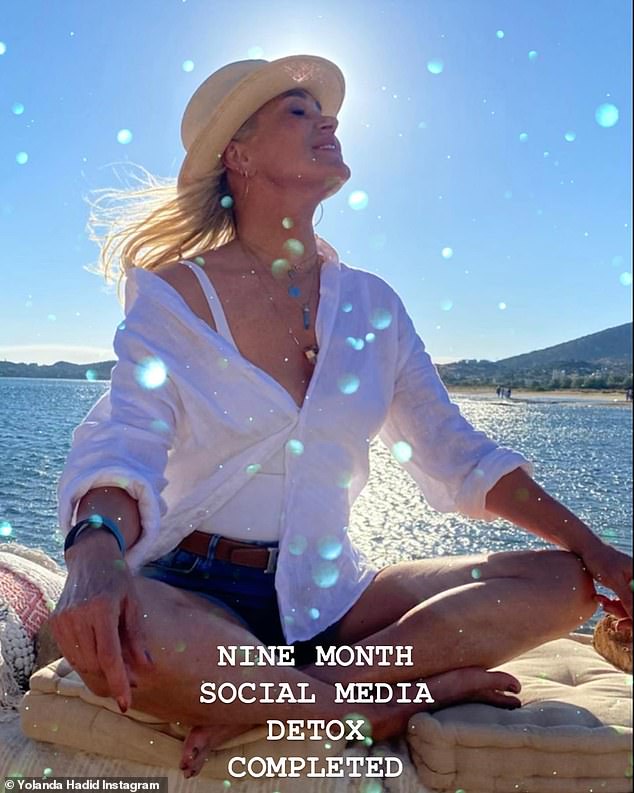 Detox: Yolanda Hadid, 58, has returned to Instagram after taking a nine month break to focus on both her mental and physical health

Yolanda shared a photo of herself sitting on soft cushions with her face upturned towards the sky with glistening water stretched out behind her.

The TV personality wrote out a lengthy caption to her 3.8 million fans and followers. After stating her return, she jumped into expressing her reasons for stepping away from social media for such a long time.

‘After the loss of my mother I really struggled with depression followed by a lyme relapse….the emotional stress and grief strongly effected my immune system.’ 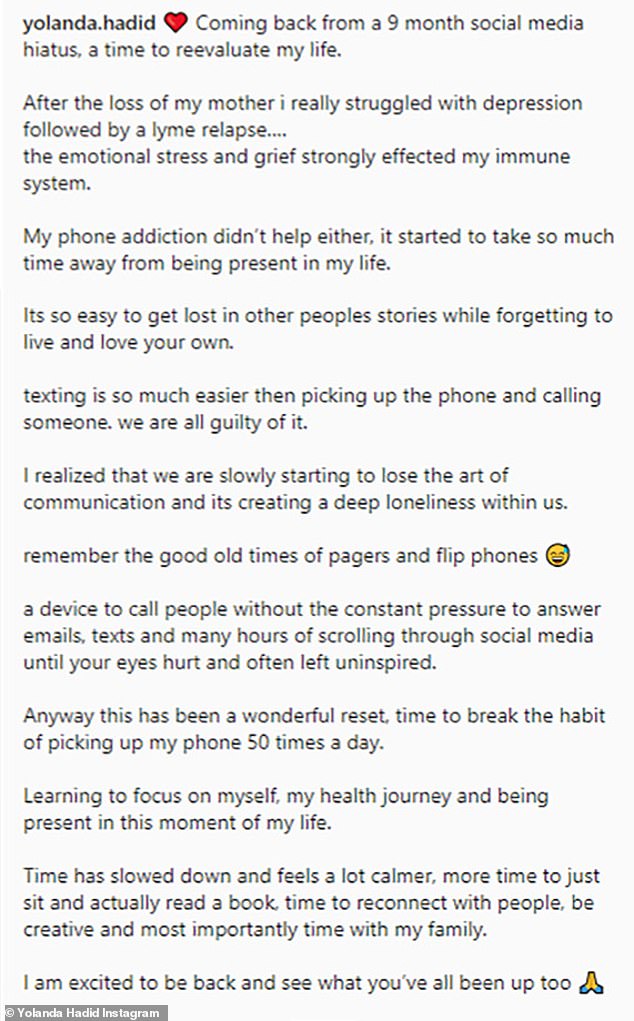 Personal struggles: The mom of three typed out a list of reasons as to what prompted her hiatus and detailed her struggles with depression following her mother’s passing and her battle with Lyme disease

If left untreated, Lyme disease can lead to health issues such as joint pain and in other cases, can cause severe neurological problems such as ‘weakness or impaired muscle movement’, according to Mayo Clinic.

‘My phone addiction didn’t help either, it started to take so much time away from being present in my life. Its so easy to get lost in other peoples stories while forgetting to live and love your own,’ she continued.

Yolanda also reflected on the past and how phones have caused people to ‘lose the art of communication.’

She then expanded on how the hiatus has had an amazing and positive impact on her life. 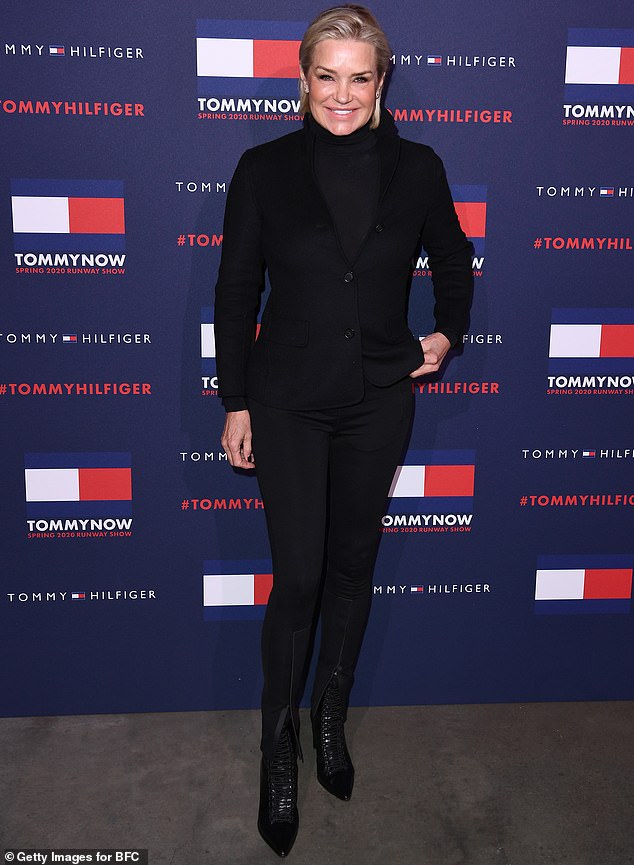 Health battle: The former model has been suffering with Lyme disease for years, and took a break from social media due to a ‘lyme relapse’; Pictured 2020 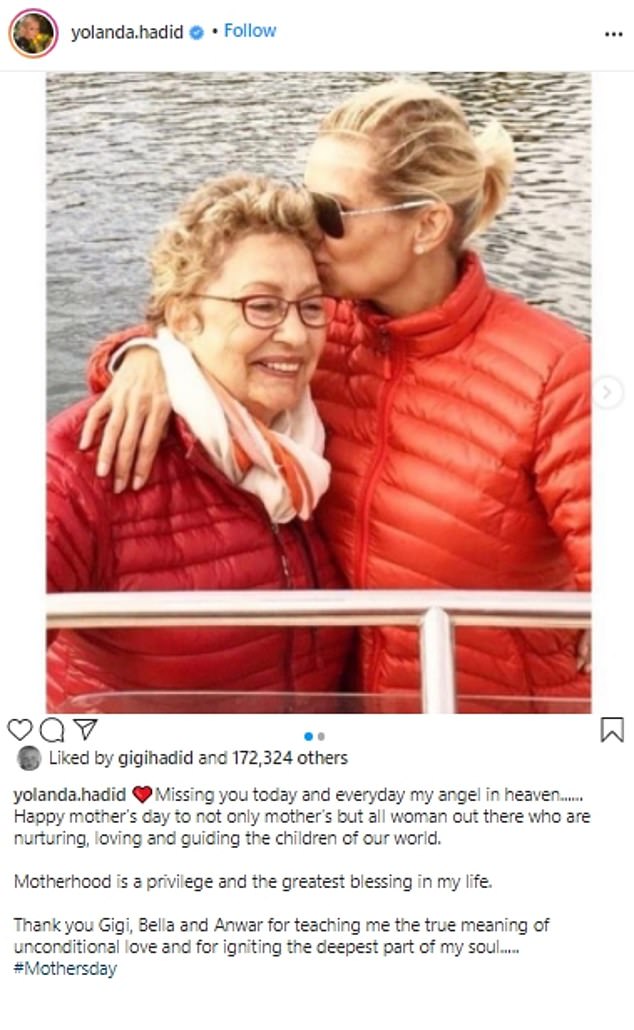 Needing a break: The TV star also explained that the loss of her mother caused her to lapse into depression: ‘After the loss of my mother I really struggled with depression followed by a lyme relapse….the emotional stress and grief strongly effected my immune system’

‘Anyway this has been a wonderful reset, time to break the habit of picking up my phone 50 times a day.’

The Real Housewives alum stated that she was able to, ‘focus on myself, my health journey and being present in this moment of my life.’

To finish off her caption, Yolanda added how her life has changed for the better since her nine month break.

‘Time has slowed down and feels a lot calmer, more time to just sit and actually read a book, time to reconnect with people, be creative and most importantly time with my family.’

Her daughter Bella, 25, seemed to also share her mother’s joy and typed out, ‘We love you,’ in the comment section. 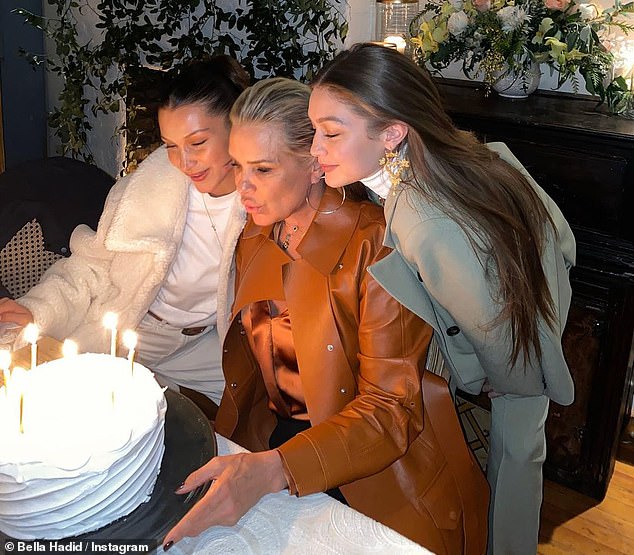 Focus: Yolanda explained that she took the nine month break from social media to focus on herself and her family; Pictured with daughters Bella, 25, and Gigi, 27 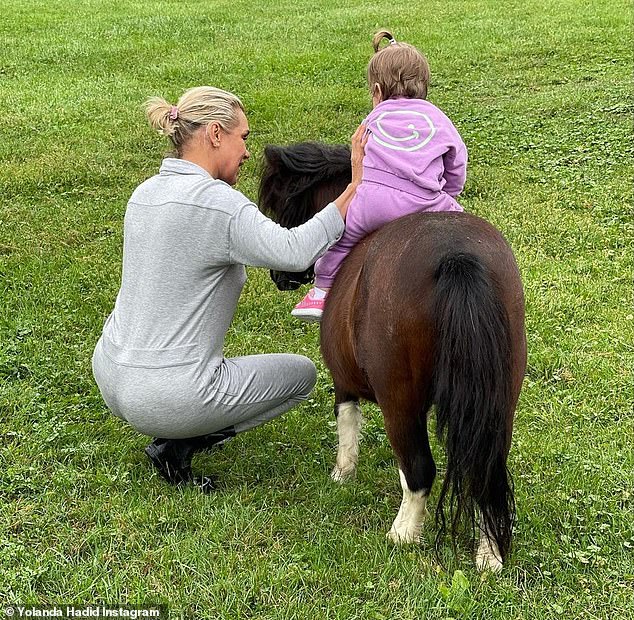 Devoted grandmother: Yolanda is pictured with Gigi’s daughter, Khai, one, as she learns to ride a pony

During an interview on the Wendy Williams Show, Yolanda opened up about her struggle with Lyme disease and the time it took to properly diagnosis the health problem.

‘At first, for maybe a year, a year and a half, I was just kind of thinking I’m tired, I have the flu,’ she explained.

Doctors at first told her that she had chronic fatigue, but she expressed that, ‘Something was eating my brain. I can’t think anymore. I mean, I forgot the alphabet, I forgot how to read a book.’

After meeting with a specialist abroad in Belgium, the mom of three was officially diagnosed with ‘chronic neurlogoical Lyme disease.’ Both her daughter, Bella, and her son, Anwar, 23, also have the disease. 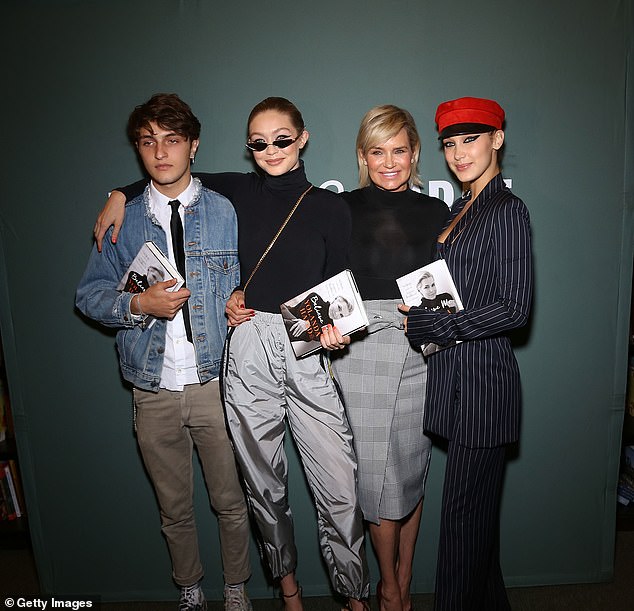 Family struggle: Both her Bella, and her son, Anwar, 23, also suffer from Lyme disease; Pictured in 2017