Alex Yee promised his girlfriend a dog but sold her a pup. All that after English triathlon’s heir to the Brownlee brothers beat his Welsh partner to a gold medal in the mixed relay on Sunday.

While Yee’s victory alongside Sophie Coldwell, Samuel Dickson and Georgia Taylor-Brown was routine, with Wales and Australia far behind in silver and bronze respectively, greater unpredictability came from entertaining exchanges around the interview area.

That was when it transpired Yee had apparently told his girlfriend of six years, Olivier Mathias, the time would be right to get a Labrador if they both made the podium here for their opposing nations. As Mathias explained: ‘I’m pretty sure we had a deal that if Wales got a medal we could get one, but he’s backtracking.’

Yee, a winner again two days after taking the individual gold medal, was having none of it, which drew considerable scepticism from Coldwell. ‘I didn’t shake on that – I haven’t backtracked,’ Yee said. ‘Maybe after the Paris Olympics.’

If the parameters of that latter suggestion are that Yee secures a third Olympic medal in 2024 – to go with his individual silver and relay gold from Tokyo – then they can start measuring for a kennel with some confidence. His performance on Friday had been imperious in chasing down and beating New Zealand’s Olympic bronze medallist, and he crushed the same elite-level competitor on the first leg of this relay on a shortened course by 20 seconds. 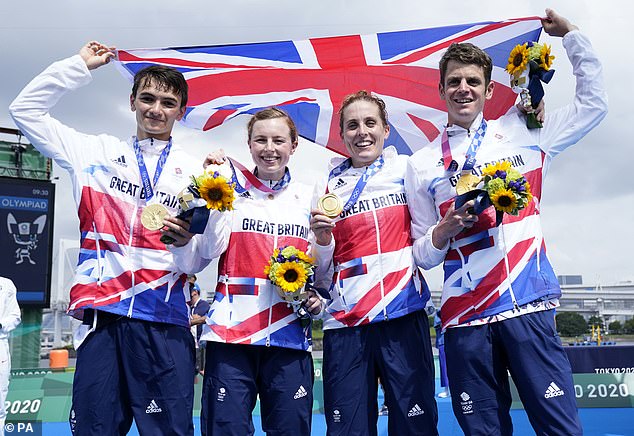 As part of Team GB, Yee won gold in the mixed relay at the 2020 Olympics in Tokyo Coldwell extended the lead over second place to 27sec, before it was cut to 16sec on Dickson’s watch, with Mathias’s Welsh quartet, including Iestyn Harrett, Dominic Coy and Team GB Olympian Non Stanford, giving chase. Taylor-Brown, who was second for England in the individual, sped away on the run for a 46sec win.

Yee said: ‘It’s great,’ said Yee. ‘Running down the hill was a bit like the Tour De France, everyone on the sides, helicopter above you. It was a bit surreal. It was really cool.

‘Now me and Liv can put ours next to each other. We have just moved house so hopefully there will be a nice place for them somewhere.’

Six Nations: Anthony Watson to ‘be a Maserati for the day’ for England against France

Manchester United: Ralf Rangnick ‘is pushing to sign Erling Haaland and has spoken to his father’