The 35-year-old WAG married Wayne in 2008 and the couple have four sons – but their relationship has been marred with several claims of infidelity.

Addressing the reports in the trailer for Rooney, an Amazon Prime documentary on the life and career of the footballer, the couple spoke candidly about the impact it had on them.

Reflecting on Wayne’s infamous romp with three prostitutes back in 2002, Coleen said: ‘I knew groups Wayne was hanging around with – together with alcohol – not good. I forgive him but it wasn’t acceptable.’ 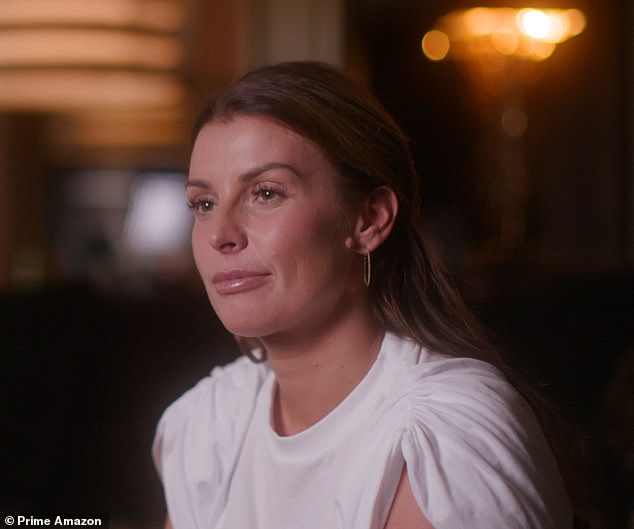 ‘It wasn’t acceptable!’: Coleen Rooney broke her silence on husband Wayne’s many infidelities  in the trailer for the upcoming Amazon Prime documentary, Rooney

Wayne, 35, then noted that he is still suffering from the aftereffects of the scandal, admitting: ‘People still look at me in a different way.

‘For me it’s important that people remember me for who I am rather than what I’ve done.’

Wayne and Coleen began dating aged 16, but had known each other since they were 12 when Rooney played football against her brothers in the garages behind her house. 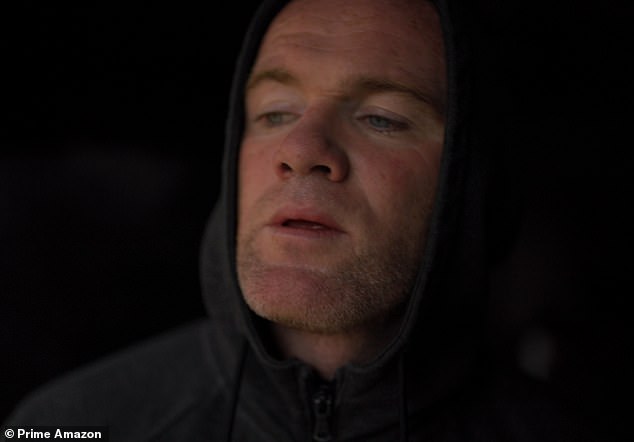 Scandalous: Wayne, 35, then noted that he is still suffering from the aftereffects of the scandal, admitting:, People still look at me in a different way’

Their relationship has been marred with various cheating scandals – with the footballer making national headlines when he was found to have visited three proustites as a teenager.

In 2004 after Wayne, then aged 18, moved to Manchester United, it was discovered that the teenager paid £140 for sex with prostitute Charlotte Glover, 21.

It was also claimed that at a brothel in Liverpool he slept with Gina McCarrick, then 37, and grandmother Patricia Tierney, then 48, who wore a rubber catsuit and was known as the ‘Auld Slapper’.

Devastated Coleen stood by her man but didn’t comment publicly on the claims – though later admitted that when the scandal came out she hadn’t yet slept with Wayne herself. 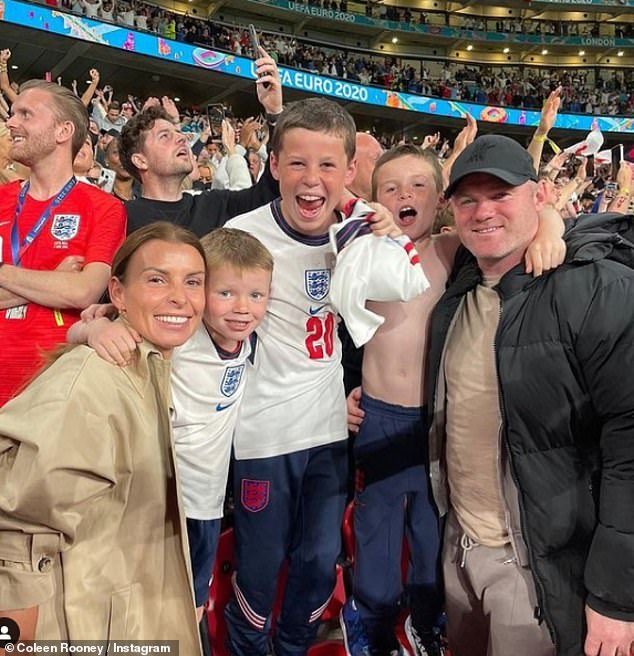 Family: The 35-year-old WAG married Wayne in 2008 and the couple have four sons (pictured earlier this year with sons Kai, 11, Klay, eight, and Kit, five)

The pair worked through their troubles and wed four years later, though their newlywed bliss was short-lived, as it emerged in 2010 that the footballer had slept with two more prostitutes.

Wayne was found to be having secret hotel sessions with £1000-a-night prostitute Jenny Thompson and fellow call girl Helen Wood while Coleen was pregnant with their first son, Kai.

Their last meeting was in October 2009, a month before Coleen gave birth. 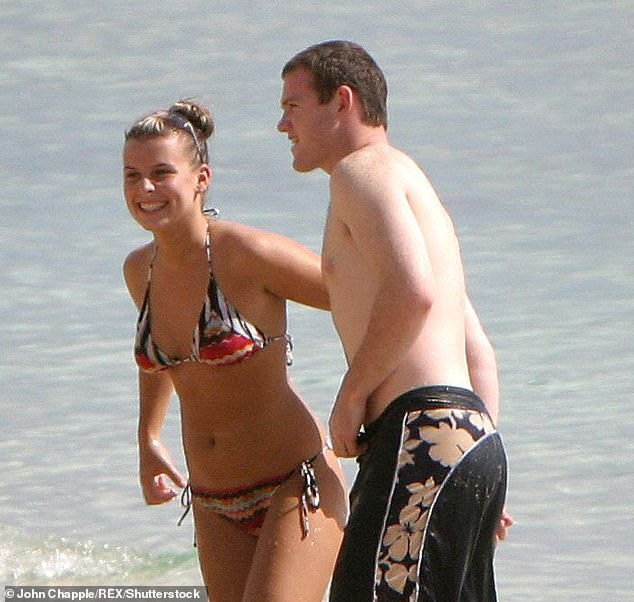 Young love: Wayne and Coleen began dating aged 16, but had known each other since they were 12 when Rooney played football against her brothers (pictured in 2004)

In 2017, Wayne was alleged to have enjoyed a ‘kiss and cuddle’ with another woman before being arrested for drink driving while Coleen was pregnant with their fourth child.

The footballer was charged with drink-driving after being caught behind the wheel of a VW Beetle belonging to a woman he picked up after a 10-hour drinking session while his pregnant wife and three sons were on holiday.

Lettings agent worker Laura Simpson, 29, said the pair had ‘kissed and cuddled’ and she would have ‘s*****d’ him if he had not been pulled over by the police.

Coleen then flew back from Spain with their children and wrote a candid Facebook post about the scandal. 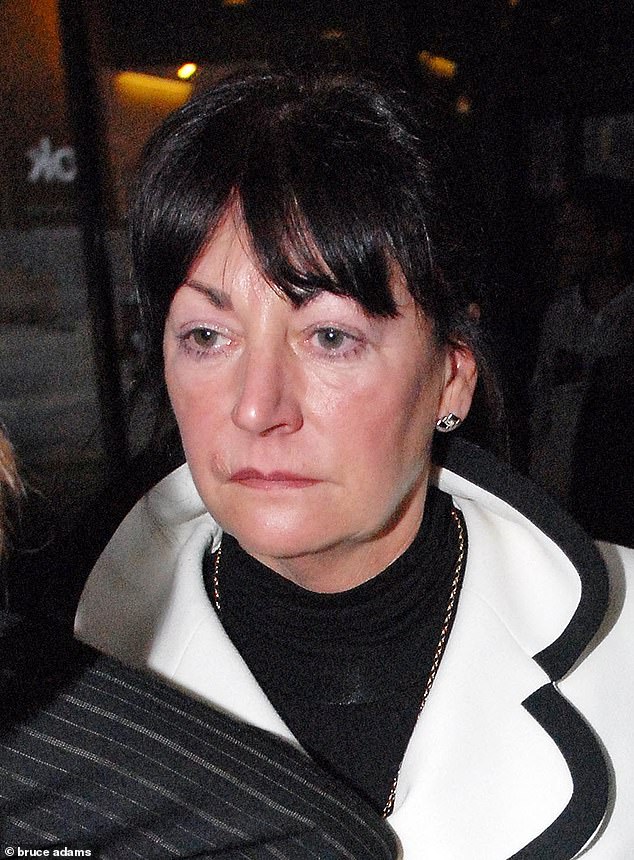 Scandal: In 2004, Wayne, then aged 18 paid £140 for sex with three prostitutes including grandmother Patricia Tierney, then 48 (pictured)

She penned: ‘Before all the stories begin, Yes, I have put my wedding ring on……. A lot of people will be saying ‘you don’t have to explain yourself, don’t feel like you have to do this’ etc, I know I don’t, but I am and I want to.

‘It didn’t feel right wearing my ring, I see it as a sign of commitment and I was unsure what was happening. I don’t always wear my ring day to day, especially when I go the gym.

Insisting she is a ‘strong person’ and doesn’t need people to feel sorry for her, Coleen set the record straight once and for all about her marriage. 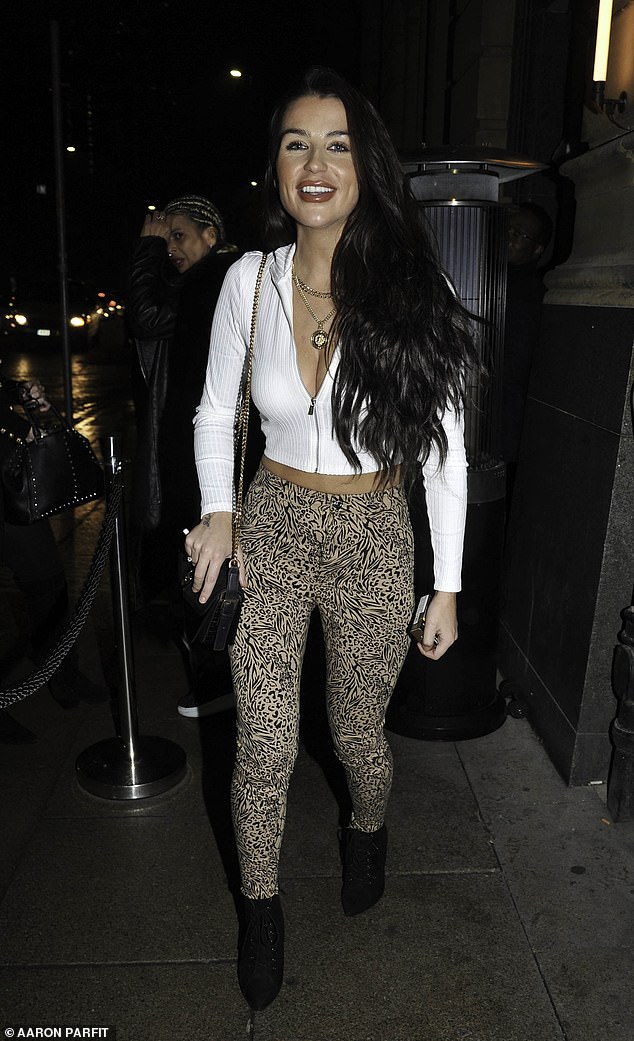 Another fling: It emerged in 2010 the footballer had slept with two more prostitutes, including  £1000-a-night prostitute Jenny Thompson (pictured)

She continued: ‘A few people are probably thinking am stupid for staying in my marriage. I am not stupid, I know my own mind and it’s something I want to try and work on.

‘Before the headlines start…. No, I’m not taking Wayne back as he’s never left. Yes, it has been a s**t time, and yes, time was spent apart and I thought my marriage might have been at an end.

‘I’m not going to list Wayne’s good qualities as a person as I don’t think he deserves it at this time but one thing is that he is a brilliant dad.

‘He’s made silly and selfish mistakes, some he’s learnt from, some obviously not. However maybe that will change? In life, you don’t know what’s going to happen tomorrow.’ 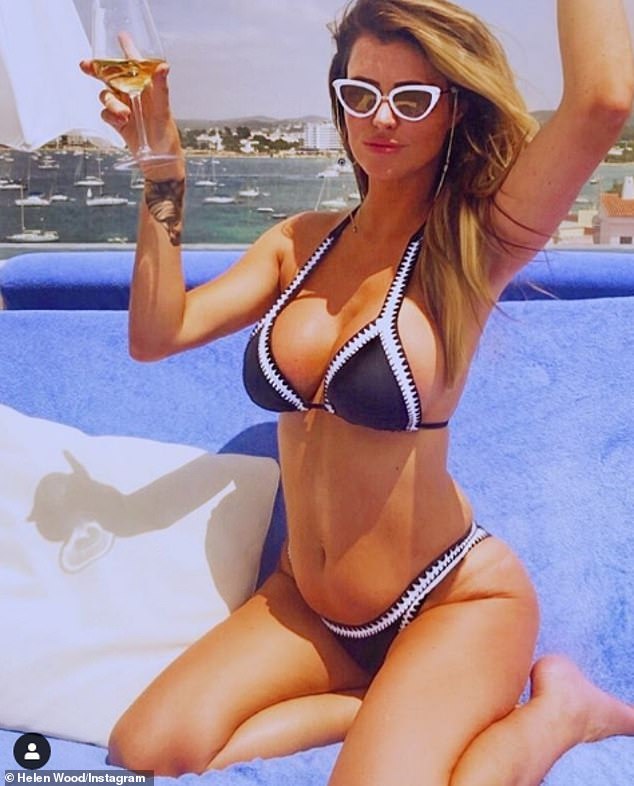 Dalliance: Wayne was found to be having secret hotel sessions with call girl Helen Wood (pictured) while Coleen was pregnant with their first son, Kai.

Referencing the night of Wayne’s arrest for drink driving, Coleen appeared to blame the influence of alcohol for his behaviour.

She wrote: ‘One thing I do know is that too much alcohol on a night out is a dangerous and a lot of stupid mistakes are made and things are said under the influence.

‘I would never trust ANYONE who has had a lot of alcohol, it changes some people drastically.

Coleen also hit back at fan speculation she was staying with Wayne for his money, insisting that love and family is what is keeping them together.

She penned: ‘It’s my decision …. do I love Wayne … yes I do. If I didn’t then I wouldn’t be trying to make it work. I know I would be fine on my own, with just me and my children, but I don’t want to live like that, I want to try and continue our marriage and live as a family, because that’s what I want to do.

‘I’m not saying everything is fine and forgotten about, but we are as good as can be at this point, I’m not the type of person to put a show on and say we’re all loved-up….I’m just real.’ 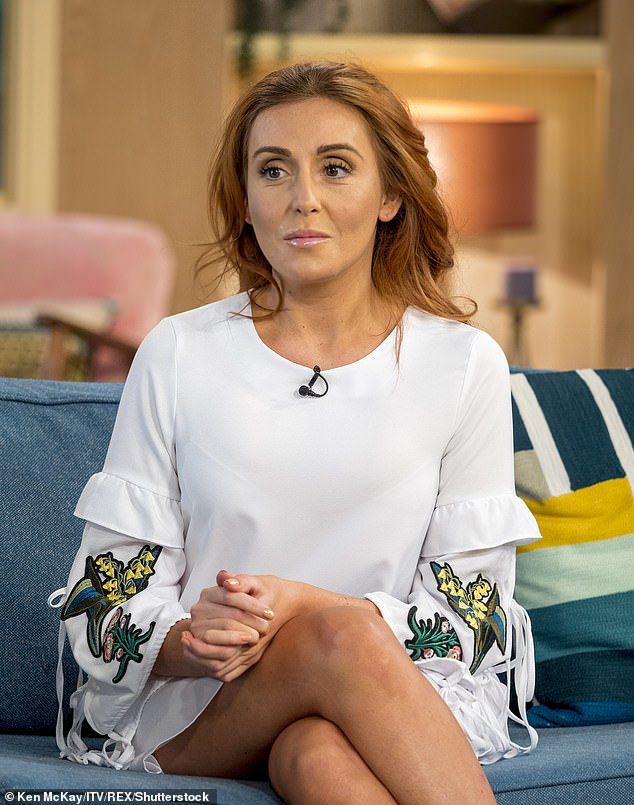 Party girl: In 2017, Wayne was alleged to have enjoyed a ‘kiss and cuddle’ with Laura Simpson before being arrested for drink driving while Coleen was pregnant with their fourth child

Coleen’s emotional Facebook post was met with an overwhelmingly positive response from her fans, who wished her luck and praised her for her ‘brave’ decision.

The family then moved to the States, but Wayne was embroiled in another scandal in 2019, with reports that their marriage was ‘hanging by a thread’ after Wayne was spotted drinking with barmaid Vicki Rosiek until 2.30am.

The January incident came just weeks after he was arrested for being drunk at an airport in Washington DC.

Fast forward to the summer, and Wayne was embroiled in another cheating scandal in August after he was pictured at 5.30am in a Vancouver hotel with a mystery woman following a night out with his DC United teammates. 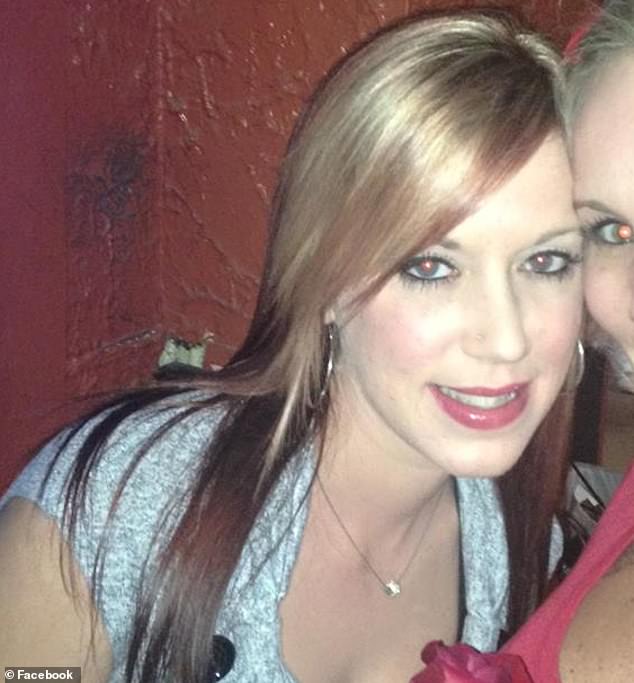 Another one: In 2019 there were reports that their marriage was ‘hanging by a thread’ after Wayne was spotted drinking with barmaid Vicki Rosiek until 2.30am

Wayne insisted that nothing untoward had happened, however, tweeting: ‘Nothing happened between me and any girl on that night in Vancouver. I did not enter the lift alone with the girl pictured in the hotel foyer.

‘The girl pictured in the club was simply one of many who innocently asked for autographs and pictures.’

Wayne then hit headlines once again this year after pictures emerged of the star partying and falling asleep in a hotel room with young women.

The married father-of-four later admitted he ‘made a mistake’ and apologised to his family and Derby County after he paid the three party girls £1 to buy the copyright to the images after accusing them of blackmail, prompting them to offer an apology. 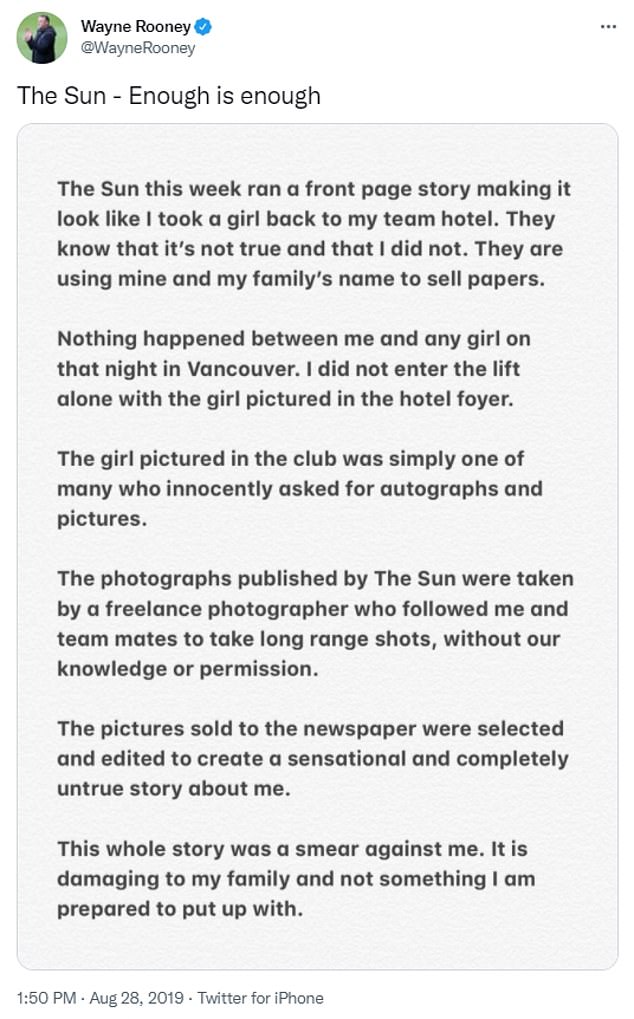 Innocent: Wayne was embroiled in another cheating scandal in August 2019 after he was pictured at 5.30am in a Vancouver hotel with a mystery woman but insisted it was innocent

Wayne told Sky Sports News after he managed Derby to a friendly victory over Real Betis on Wednesday: ‘I made a mistake.

‘I went to a private party with two of my friends and from me, I’d like to apologise to my family and the club for the images which were going round and I want to move forward on this.

‘I’m grateful to Derby County for giving me this opportunity to get this club back to where it belongs, and I’ll do everything in my power to make sure I do that.

‘It’s dealt with. I’m looking forward to moving forward and preparing for another game.’ 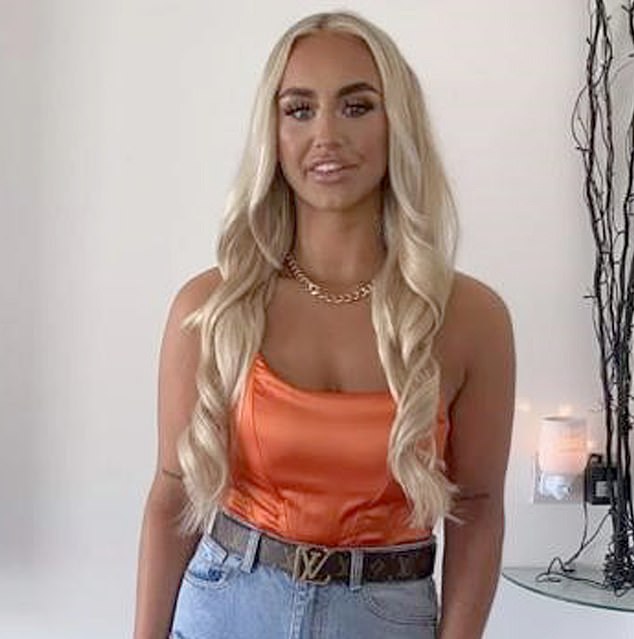 Back again: Wayne then hit headlines once again this year after pictures emerged of the star partying and falling asleep in a hotel room with young women (pictured: model Tayler Ryan)

Wayne and Coleen’s torrid relationship history is set to be examined in Rooney, which will launch on Prime Video in early 2022.

The film sets out to give unprecedented access to one of football’s greatest strikers as Rooney recounts stories from some of the most important moments of his life, with testimonies from the people closest to him, including family, friends and his wife.

Featuring intimate interviews with footballing greats such as David Beckham, Gary Neville, Rio Ferdinand, and Thierry Henry, they illustrate first-hand accounts of Rooney as a teammate and an opponent. 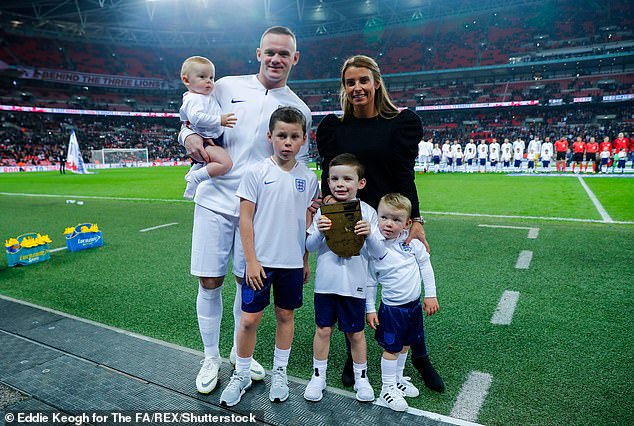 One to watch: Wayne and Coleen’s torrid relationship history is set to be examined in Rooney, which will launch on Prime Video in early 2022

Gift of the Ab! Abramovich pushed for Kai Havertz deal and the German is FINALLY flourishing