The NRL has been rocked by a new Covid-19 scandal just a month before the finals.

In bizarre scenes, a positive RAT cartridge was spotted in the post-match media room just before the Manly and Parramatta coaches were due to speak at 4 Pines Park on Friday night.

An NRL official was alerted and discussed the situation with both the Sea Eagles and Eels – while a scrum of bemused journalists remained in the press conference room about four metres from the test.

It remains unclear where the positive test came from, given players and staff from both clubs – as well as reporters – tested negative as part of regular pre-game Covid tests.

Sea Eagles coach Des Hasler eventually came out for his scheduled press conference – but skipper Daly Cherry-Evans chose to stay in the home sheds to avoid being potentially exposed to the test. 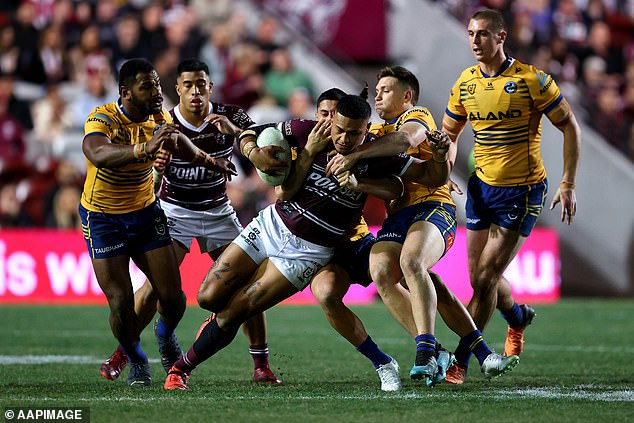 In bizarre scenes, a positive RAT test was spotted in the post-match media room just before Manly’s and Parramatta’s NRL coaches were due to speak at 4 Pines Park on Friday night 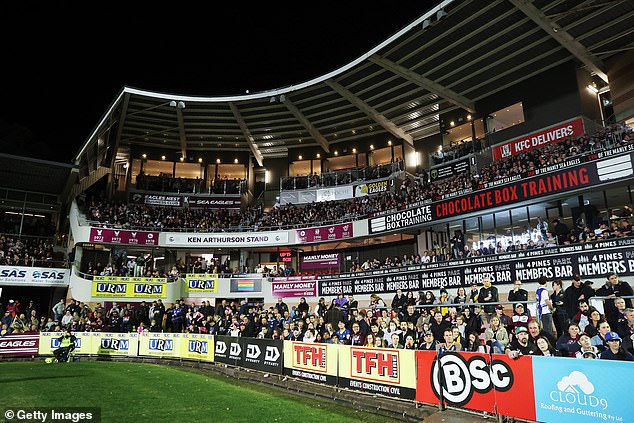 It remains unclear where the positive test came from, given players and staff from both clubs – as well as reporters – tested negative as part of regular pre-game Covid testing

A lengthy delay then followed, before Eels boss Brad Arthur gave his thoughts on his side’s 36-20 victory – outside a women’s toilet near the main entry of the ground.

To cap off the unique situation, Parramatta players refused to do interviews after the game.

The likes of captain Clint Gutherson and Dylan Brown were keen to avoid any risk of being exposed to the virus.

The positive RAT test was later removed by an NRL official.

On the field, Manly’s chances of finishing in the top eight nosedived thanks to a Gutherson masterclass.

Absolute shambolic scenes at Brookvale. Positive RAT cartridge sitting in the designated press conference room. None of the journalists behind it. DCE opted out of presser while Brad Arthur moved his outside and no Eels players spoke as a result. #NRLManlyEels

TOILET PRESSER: How good are suburban grounds? A COVID positive was found in media room. So BA shifted his presser to Brookie loo pic.twitter.com/CzNMoK0aJN

The local junior from Cromer Kingfishers on Sydney’s northern beaches ran for 179 metres, had three try assists, two line-breaks, three tackle busts and scored a brilliant individual  try with the game on the line.

With halfback Mitchell Moses injured, the Eels needed their captain to deliver – and he didn’t disappoint.

Parramatta’s push for the top four is now looking promising, as they strive for week to week consistency.

Victories the past two rounds over Manly and Penrith have offered considerable optimism for Eels fans, who haven’t celebrated a premiership since 1986.

Meanwhile, Hasler conceded his team need to win their final four matches versus the Titans, Sharks, Raiders and Bulldogs if they are to feature when it matters in September.

They are expected to be without Kieran Foran for at least a week, after the star pivot tweaked his hamstring late in the contest.