David Warner is like a box of chocolates – you never know what you’re going to get – but there is no doubt about what he will do before walking on to the Sydney Cricket Ground for the first day of the fourth Ashes Test on January 5.

He will place his hand on the plaque outside the home dressing room that commemorates the life of his little mate, Phillip Hughes, who tragically died after being struck by a short-pitched delivery at the ground on November 25 back in 2014.

It happened in the 49th over of a Sheffield Shield interstate match with Hughes, playing for South Australia against his former team NSW, sitting on 63 runs and looking to build a big score that would see him come into the frame for a Test recall against India.

NSW fast-medium bowler Sean Abbott sent down his third ball of the over. Hughes tried a pull-shot, slightly mistimed the stroke, and was struck on the back of the neck.

As Hughes fell forward onto the pitch, one of the first to his side was Warner. 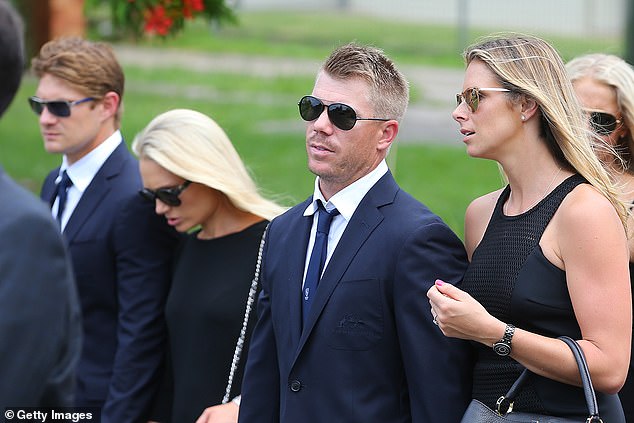 Warner was by Hughes’ side seconds after he was felled by the bouncer at the SCG (pictured, with wife Candice Warner at Hughes’ funeral) 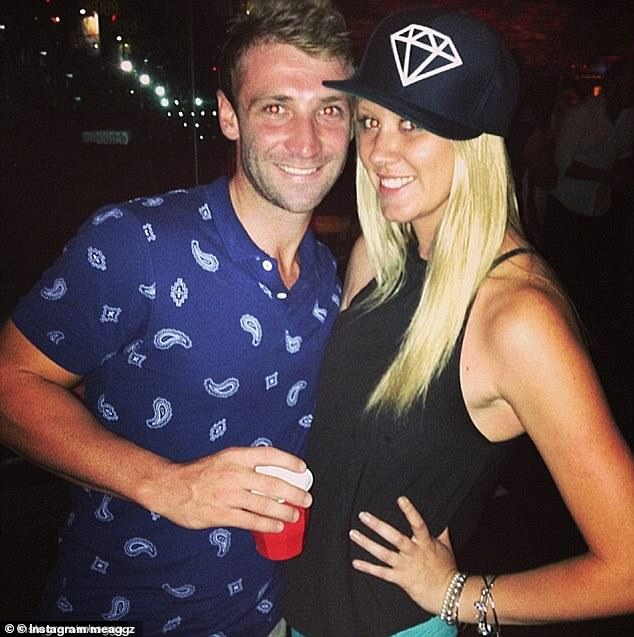 What happened over the next two days before Hughes’ life support was turned off at St Vincent’s Hospital has had a lasting effect on all of Australian cricket, but few felt the pain and loss as personally as Warner.

A polarising character who has earnt his share of negative headlines over the years, the care and concern that Warner showed for the stricken Hughes in the minutes after the fatal accident left an indelible impression on those who witnessed it. 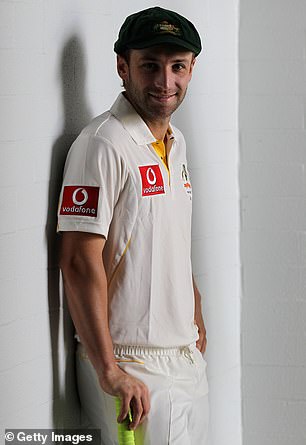 In his new book ‘If These Walls Could Talk – A Celebration of the Sydney Cricket Ground’, journalist Andrew Webster speaks with key figures who were at the ground on that shocking day, including Warner who opens up about the emotional scars that will be with him forever.

‘I was standing at gully when it happened — and it all happened so fast,’ Warner recalls in the book.

‘I’d been talking to him (Hughes) the over before, pointing to my little girl Ivy on the boundary. At lunch, he’d walked over and said hello. Twenty minutes later, he was struck in the head. It was heartbreaking.’

‘Abbott moved in, pitched the delivery short, Hughes tried to hook but was late on the shot. When the ball struck him in the neck, and he collapsed on the pitch, the players and umpires immediately sensed the seriousness of the situation.

‘The NSW players who had been taunting him now raced to his aid.

‘Abbott cradled Hughes’ head as Warner sprinted for the change room to request an emergency phone call before sprinting back to the middle. Shane Watson and Brad Haddin placed their friend in the brace position.

‘Warner refused to leave Hughes’ side, holding his hand as the Medicab made its way towards the boundary.’

The tenderness shown by renowned tough-guy Warner towards his stricken mate at that moment is something that respected photographer Phil Hillyard will never forget, Webster revealed. 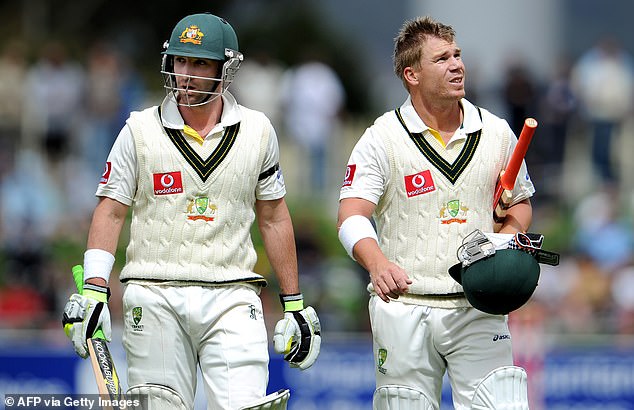 At the time of the incident, Hughes was playing for South Australia against NSW – close friend Dave Warner was representing the Blues at the time (pictured, the pair opening the batting for Australia in 2011 in Hobart) 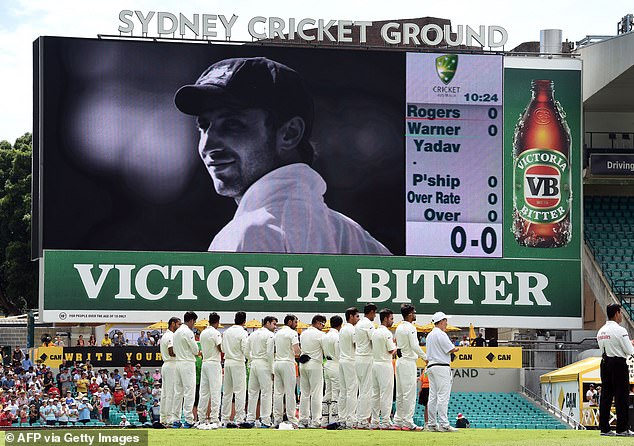 ‘One of the best in the business, Hillyard covered most sports over a 20-year period, but cricket was different. He understood the game and instinctively knew where the ball was headed before many of his peers.

‘When I speak to Hillyard now, I can hear the pain in his voice.

‘Hardest thing I’ve covered in my career, and that includes the tsunami,’ Hillyard says. ‘The thing that stood out was Dave Warner, who wouldn’t let go of him.

‘When the Medicab buggy stopped in front of the Members, I ran around to take a photo and he (Warner) said, ‘Mate, no, put the cameras down.’ Which we did. I was trying to photograph his compassion, but I understood.’ 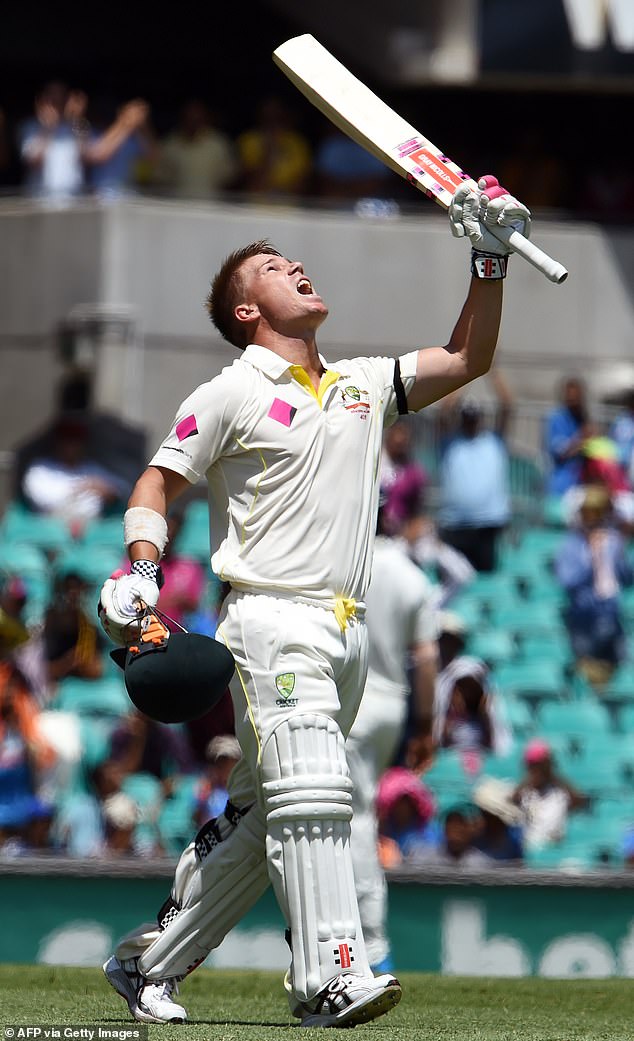 In emotional scenes, Warner hit a century against India in January of 2015 at the SCG – just weeks after the incident where Hughes lost his life

With the country reeling following Hughes’s passing, the first Test in Brisbane was postponed, and the series began in Adelaide.

‘Before the opening Test, Dave Warner had walked into the nets, faced deliveries for five minutes and then walked out,’ Webster writes.

‘I shouldn’t be here,’ he told his teammates. The following day, he blasted 145 in Australia’s first innings.’

By the time the series moved to Sydney, Australia had the series wrapped up, but Warner was determined to make a statement, Webster says.

‘Warner was itching for a big score to honour his mate. He touched the plaque as he walked along the race and then burst through the gates onto the field.

‘It was hard,’ Warner reflects. ‘It was my first time back there as a player since it happened. I didn’t train too much at all leading into that game.

‘I didn’t want to let any emotions come to me until I played on the day. That’s where the mind takes over … you ride those emotions.’ 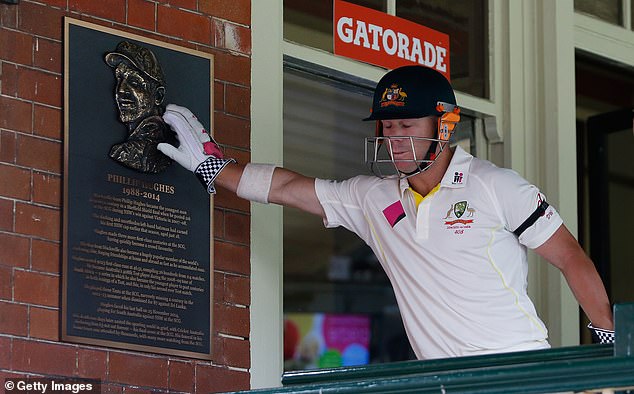 Before walking on to the pitch in Sydney, Warner paid tribute to his close mate Phil Hughes in January of 2015

If Warner had been struggling in the lead-up to the Test, those doubts had slipped away by the time he reached the crease, and he and fellow opener Chris Rogers put on 200 for the first wicket.

‘The most poignant moment came when Warner turned a ball off his hip down to fine leg to take his score to 63,’ Webster outlines.

‘As the crowd applauded, Warner walked across to the patch of turf where Hughes had fallen unconscious just six weeks earlier, where Warner had cradled his stricken mate’s head.

‘He bent down and kissed the pitch. He put his palms together to pray, then rose, looked at the heavens, and wiped away the tears.’

Warner told Webster that he and Hughes would keep up a running routine of friendly banter to ease the tension whenever they were batting together.

Asked if he still hears his little mate’s voice when he is at the crease, Warner doesn’t hesitate. 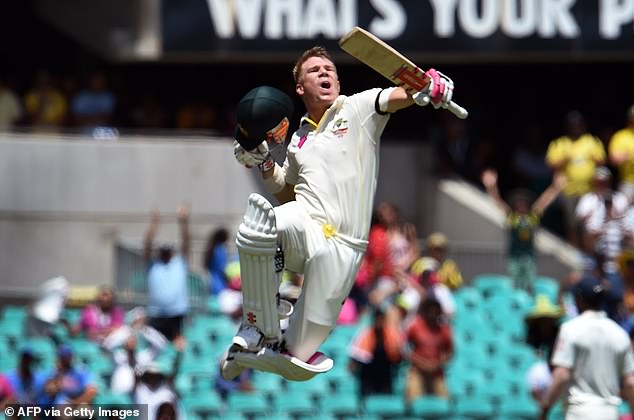 In one of the best performances of his career, Warner was a man on the mission (pictured, celebrating his ton against India in Sydney in January of 2015)