So this is what £100m gets you! Fans mock big-spending Nottingham Forest’s DREADFUL corner routine – blitzing the penalty area as the ball sails harmlessly into the Newcastle keeper’s hands

Forest were defeated 2-0 at St James Park, but reaction after the game resulted on their unusual – and ultimately unsuccessful – set-piece set-up.

However, with five players running into the box like a flock of birds, the move was hailed as ‘one of the worst corner routines you’ll ever see’ – with the ball easily gathered by Newcastle goalkeeper Nick Pope.

It took Newcastle 15 attempts to win a league match last season, amid the troubled start to the 2021-22 campaign for the Magpies, but against their inexperienced visitors, they found their way through on opening day this time around – aided by the help of Forest’s corners.

Forest were playing their first Premier League match of the 21st century, after a long period in the lower leagues. They also spent over £100m on players in the build-up to this campaign.

However, the corner routine is raising concerns about their ability to stay up, with one fan stating: ‘They won’t make it out of this league alive.’

Someone else said: ‘All of that for it to be taken in safely by the keeper. These will be right down there, surely.’

It was the visitors’ only corner of the game, so it remains to be seen whether it was a one-off trial – and error, or if this is a planned routine that will continue throughout the season.

Second half goals for Newcastle’s Fabian Schar and Callum Wilson helped the hosts to their 2-0 win, while Forest will hope for better success from corners in their home fixture against West Ham next weekend. 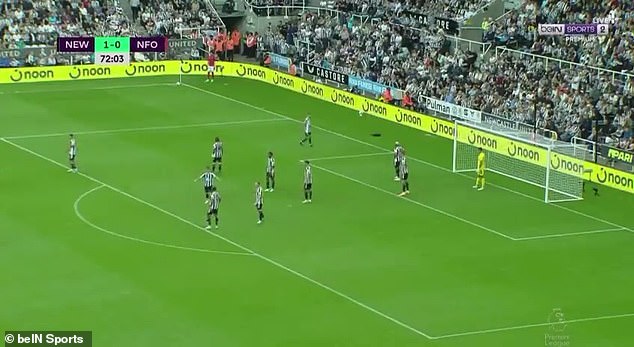 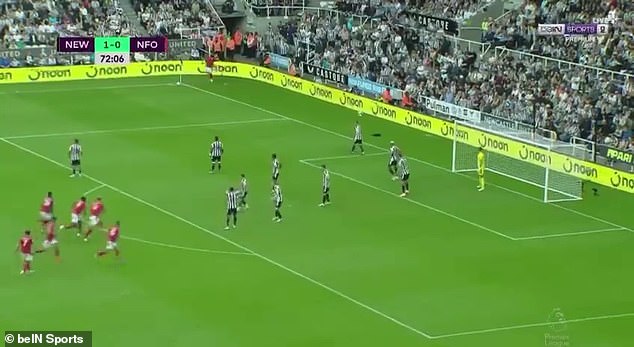 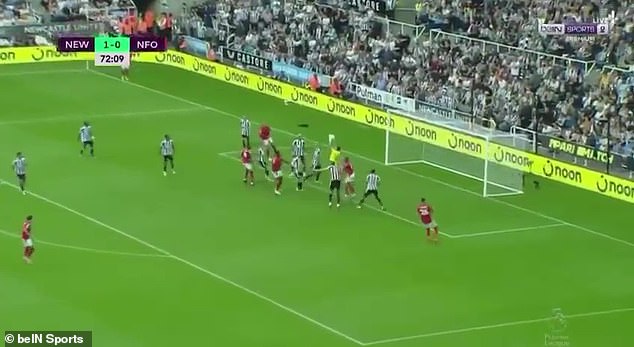 The box had no attackers, until the Forest players ran at goal – only for the goalkeeper to gather

‘I don’t want a double fine’: Frank Lampard left shocked by decision not to award Everton a penalty