Footy cult figure ‘the Phantom Siren’ makes a comeback as the Dragons are smashed by the Cowboys: ‘They weren’t entertaining the crowd so I thought I would’

After seemingly disappearing from the NRL stands in 2018 after signing off on Fox Sports, Gosh Daher – the man behind the Phantom Siren – returned at Kogarah Oval for the Dragons’ clash with North Queensland on Sunday.

The 48-year-old has attempted to bamboozle officials for the best part of 20 years with his ability to mimic the sound of the fulltime siren using nothing but his cupped hands and booming lungs.

Sitting in the stands and watching his beloved Dragons getting pumped by the Cowboys, Daher thought it was time to make a comeback.

‘The Dragons players weren’t entertaining the crowd so I thought I would,’ he said.

The first time he treated the fans to his famous wail came just before halftime. 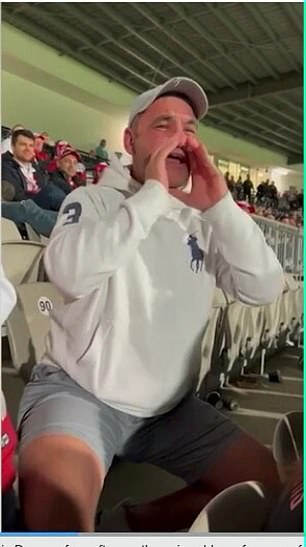 Gosh Daher AKA The Phantom Siren

His commentary partner Warren Smith picked up from there.

‘The Phantom Siren is in attendance. We’ve got the ice cream van and the Phantom, both of them on the hill at famous old Kogarah,’ he said.

‘He didn’t catch them out.’

‘He won’t catch our the officials, though, because they’ve got a countdown in their ears these days.’

While his efforts had no impact on the Dragons v Cowboys clash, the first time that Daher broke out the siren at a match, it caused chaos.

The scores were tight at Wollongong Showground with the St George Illawarra Dragons holding a slender 4-0 lead over the Wests Tigers in 2000, but with a man in the sin bin.

Wests had a scrum 10 metres out from the Dragons line with 18 seconds left on the clock before the halftime break and a real chance to score – until the Phantom Siren intervened.

Referee Paul Simpkins thought the siren was genuine and called time off as Wests’ Craig Field was setting sail for the tryline, the halfback throwing the ball away in disgust at the call.

Thankfully, Wests won 15-9 so the Phantom Siren did not have a bearing on the match.

The Phantom Siren was missed by the commentary team on Channel Nine, with Phil Gould and Billy Slater discussing the Cowboys premiership credentials at the time in the second half.

‘Can you see them offering any sort of opposition to the Panthers at all in the premiership?’ Gould asked.

‘Yeah, I can. I think the Panthers are the best team in the competition … I think [the Cowboys] are next in line,’ Slater replied.

‘Consistently [winning], along with the Sharks I suppose, but they’ve all got to beat the Panthers.

‘But they are on track, the Cowboys.’

SPORTS AGENDA: Good on Mo Salah for showing up in person to pick up his FWA award