Giovanni Simeone was still processing his recent four-goal virtuoso against Lazio when he got the greatest praise of all, via a text from dad Diego.

As the eldest son of the Atletico Madrid boss, earning praise from the intense former Lazio player has been tricky. Simeone Snr, as many have seen during his time in charge in Spain, is not easily pleased, but on this occasion he was blown away.

‘He wrote to me that I played the best game of my career,’ Giovanni told Gazzetta dello Sport.

‘He said: “I’ve never seen you like this. Beyond the goals, you didn’t lose balls and you always helped your team-mates.”‘ 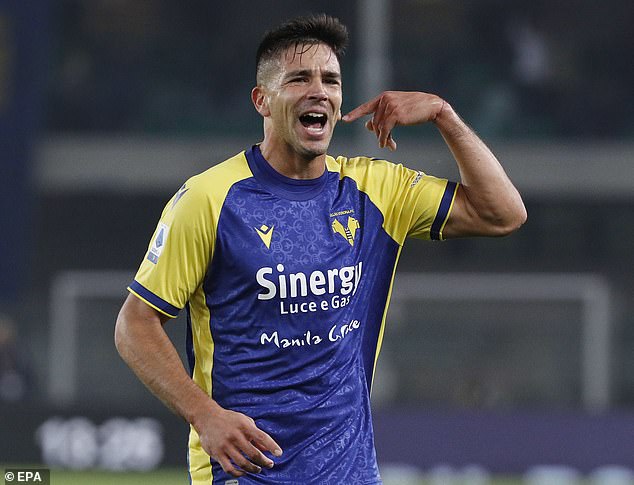 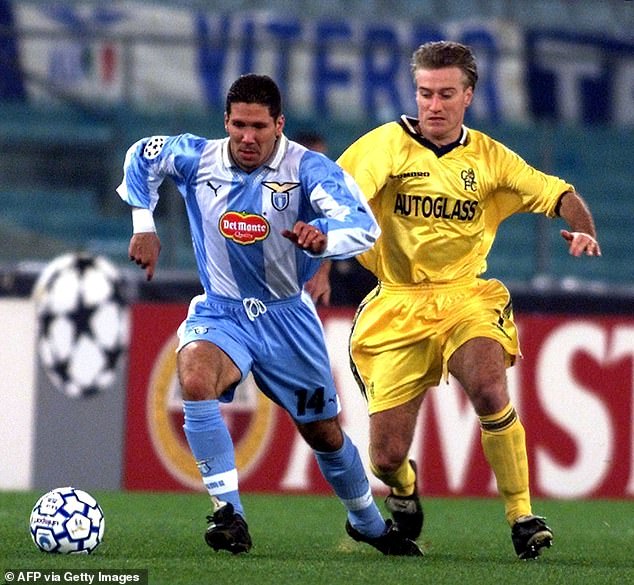 Son of former Lazio player Diego (left), Giovanni is trying to carve out his own name in Italy

His dad was right, it was the greatest single 90-minute performance of his career to date, which has seen him arrive at Hellas Verona, his sixth club by the age of 26, with a point to prove.

Simeone Jnr hit the ground running as a young player and expectations grew exponentially that he was ready to be a goalscoring machine.

Simeone was a born star at Genoa and moves to Fiorentina and Cagliari followed.

But then he stalled and with it came doubts as to whether he could cut it as a striker at the top level. 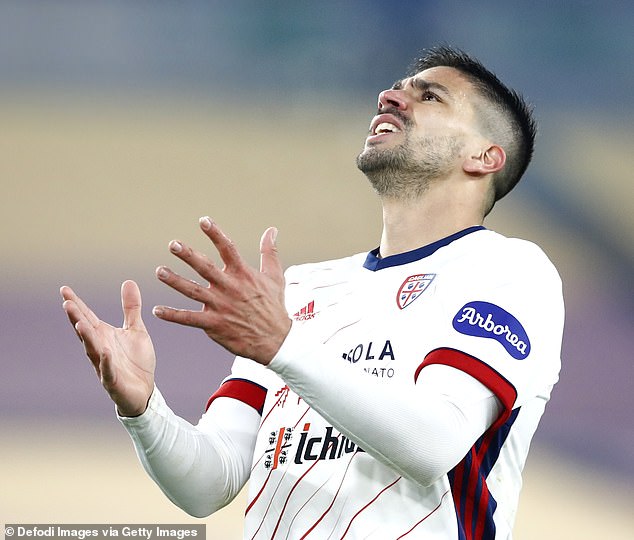 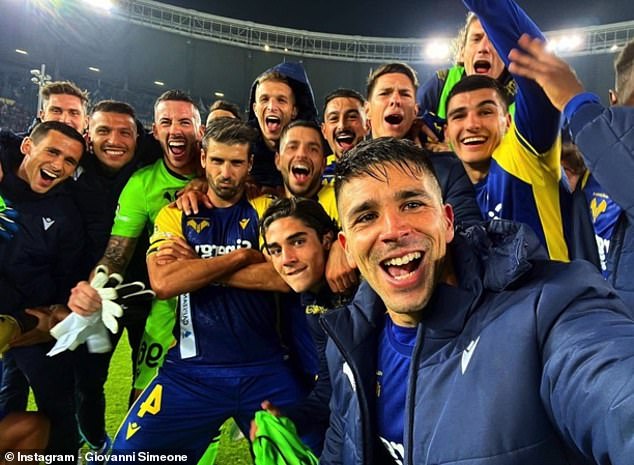 Just six goals from 34 matches at Cagliari last season saw the dye cast and he was sent packing on loan to Hellas Verona – hardly a side that has allowed strikers to dominate the scoring charts of late – to find his scoring touch.

Verona struggled badly in front of goal last season, finishing with the sixth-worst goal record in Serie A. Now, ahead of Sunday’s trip to face leaders Napoli, only the two Milan teams can boast more goals this season than eighth-placed Verona.

With eight goals in 10 league matches, including a key role in the 2-1 defeat of a beleaguered Juventus side, ‘Cholito’, a take on Diego Simeone’s ‘Cholo’ nickname, looks back to his rip-roaring best.

‘Some time ago, dad called me and passed me [Hernan] Crespo,’ Simeone explained in his Gazzetta interview. ‘He said: “You’re so strong, but you have to be nastier.”

‘I’m not like that. I fight with honesty and respect and I get respected. But I’m not interested in being bad in that sense. I can react, never provoke.’

It is an area where he differs from the game of his father. During his playing career Diego Simeone proved a master of the dark arts and they worked to great effect during his time at Atletico, Inter Milan, Lazio – and Argentina, as David Beckham can testify. 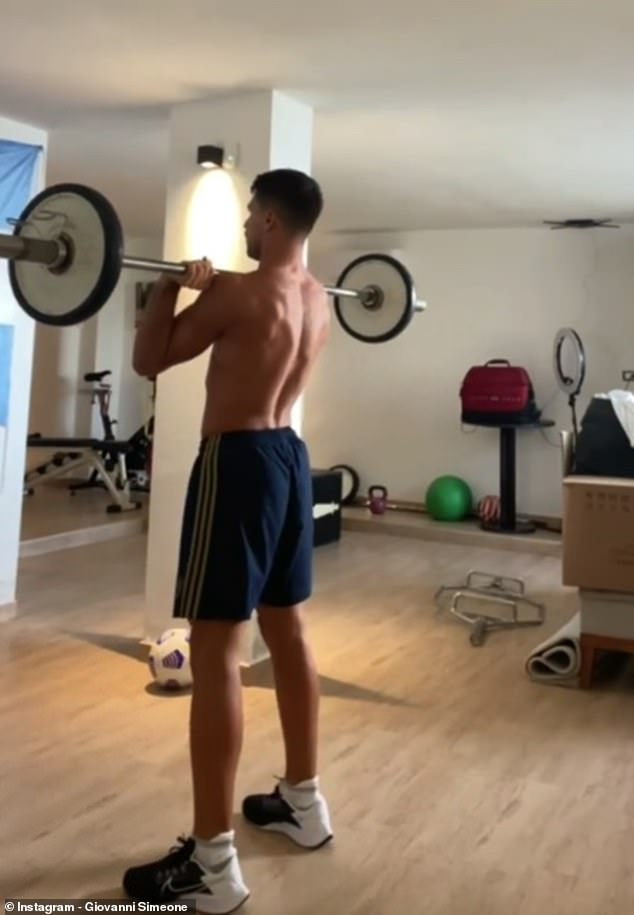 Much like his father, Simeone Jnr does not believe in days off and so constantly works hard 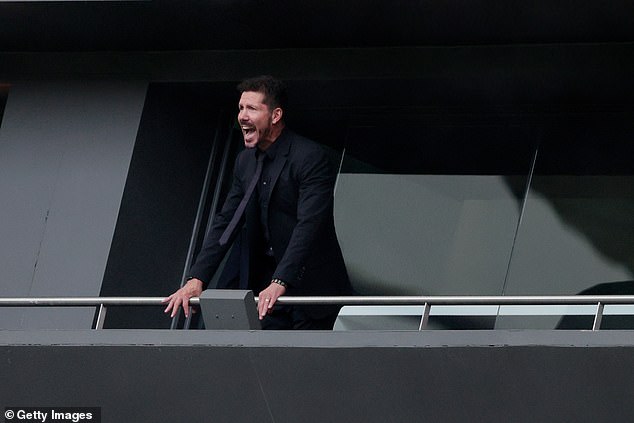 But Giovanni is headstrong in his approach to the game and after a hurdle or two he now seems to be carving out his own name, stepping out from his father’s shadow.

‘Dad did his thing and I’m doing mine,’ the 26-year-old said. ‘Every day, every year, I get more mature.

‘I’ve found the right balance and everything is working well right now.’

The younger Simeone knows his body and mind inside out and his return to form is no accident, no strike of lightning in what is his fifth season in Serie A.

He watches Rocky films if he finds himself lacking in energy and motivation for a match or a training session ahead.

‘I always do it when I need an extra charge,’ he explained.

‘There is a phrase from Rocky that I always think about: that life often brings you to your knees and no matter how much you get hit, it matters how many times you get up.’

No days off, that is one thing young Gio has been keen to inherit from his father, a work-ethic that is rivalled by very few. A cynic may say the pair are addicted to fatigue.

After marrying Giulia Coppini, the couple flew out to enjoy their honeymoon in the Maldvies and while there were drinks shared over a sunset and evening meals, it was also all about grinding for the new season. 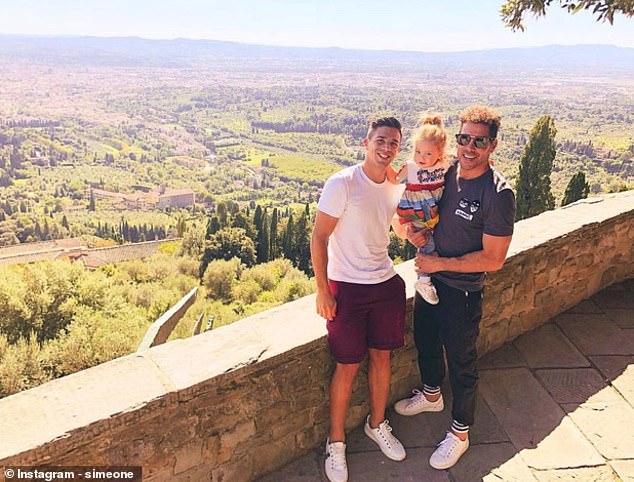 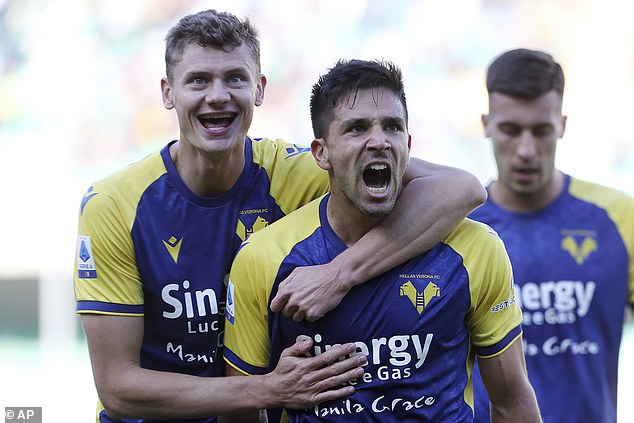 Coppini knew good and well that her husband, much like her father-in-law, didn’t believe in days off.

He explained: ‘I gave myself a rule, always train and play at my best.

‘This summer I went to the Maldives on my honeymoon and I trained every day. Luckily my wife Giulia likes the gym, otherwise she would divorce instantly!’

What is fascinating about Giovanni Simeone is that for all the intensity he is keen to harness, and also amp up with the help of Rocky Balboa, there is also a desire to focus on mindfulness and meditation to stay focused and stay present.

Meditation is growing in popularity among players in a bid to rid themselves of external distractions. Many players turn to it when form seems to escape them.

‘I’m very curious,’ he told reporters in Italy after the Lazio display. ‘I want to know myself and that’s why I meditate, for me it is important to look inside.’

Simeone Snr laid down quite the challenge to his sons having won Serie A, a Coppa Italia, an Italian Super Cup, a UEFA Cup and a UEFA Super Cup during his time in Italy as a player.

Giovanni is not close to matching any of those achievements quite yet but he is standing tall as a player in his own right. 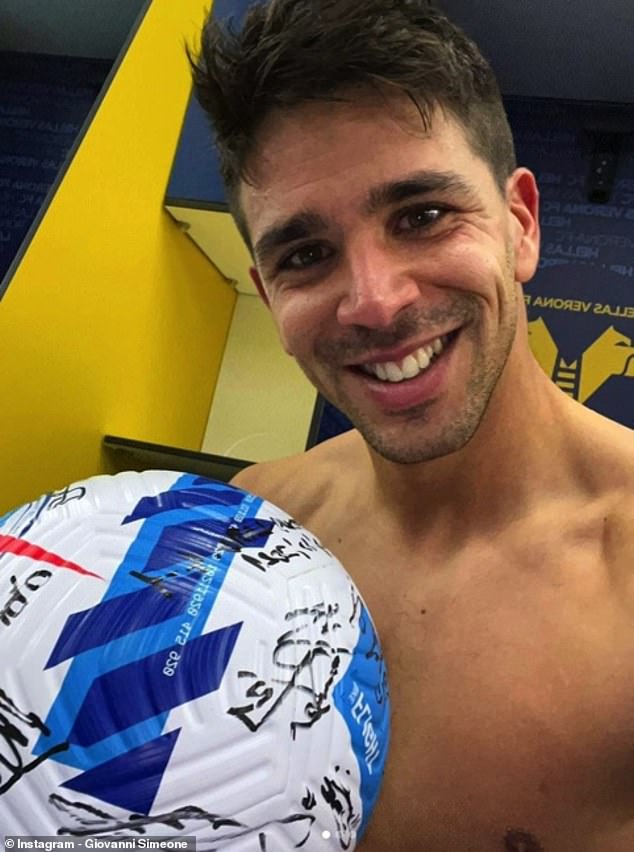 Conversations no longer start with ‘the son of’. Giovanni is Giovanni and as Juventus, his most recent prey, found, he looks to have got rid of the black cloud over him at Cagliari.

Now the aim is the Champions League. He’s yet to feature in Europe’s premier club competition but, having waited 13 years already, he knows exactly what he will do when he plays – and scores – in that competition.

‘I was 13 when I got my first tattoo,’ the striker told the Guardian in May.

‘You’re supposed to be 18, but I was such a fan of the Champions League that I got the logo done at 13. My dad didn’t want me to. And my mum said: “Why?” I said: “Because the day I play and get my first goal in it… then I’m going to kiss the tattoo.”‘

For now it’s time to focus on Hellas Verona, focus on cracking a top six finish, focus on producing a realistic shot at the Golden Boot – he is currently one adrift of Lazio’s Ciro Immobile – and he’ll be getting plenty more texts of praise from his dad.