Cody Walker is back on the angry pills and this time it was his former teammate Cam McInnes who wore the brunt of his fury.

The 2021 NRL Dally M Five-Eighth of the Year has a history of having a short fuse, which came to the surface again in Saturday’s golden-point loss to the Cronulla Sharks.

As the teams lined up to shake hands, Walker had a warm reaction to each of the Sharks players – except this former fellow Bunny McInnes.

Walker leaned in to mutter some words in his direction before shoving him away and rejecting a handshake after the match.

‘Cody Walker is absolutely the games most bitter loser. Bloke simply cannot cop anything not going his way. That’s tough to admit as he’s one of my favourites. His attitude let’s him down and distracts him,’ one fan tweeted.

Cody Walker is the dirtiest player in the competition, no surprise that he’s also a sore loser and poor sport.

‘Cody Walker being a sore loser? Would never have predicted that,’ was another’s sarcastic response.

Former Souths coach Wayne Bennett used to joke that Walker would regularly take his ‘angry pills’, and ex-Rabbitoh Dane Gagai said in 2021 that Walker’s temper was a big part of the man himself.

‘He’s a cranky little bugger. He’s got a mean streak in him. But I love playing with Cody. He’s ultra-competitive, he wants to win all the time, not just on the field or at training,’ Gagai said.

‘We were playing volleyball the other day for a recovery session and he was getting filthy and blowing up because we were losing. That’s what makes him such a special player, he wants to be winning no matter what he’s doing.’

In 2021 Walker came under fire for a series of blow-ups in a heated match and that flared up in Souths’ loss to Brisbane earlier this year.

Cody Walker is notorious for being an absolute sook when things don’t go his own way. I do believe players should be micd up more yes but you’re just assuming McInnes said something smart to Cody. Cody has history

That prompted Fox Sports’ Paul Kent to demand that Walker ‘grow up’ or watch his side continue to plummet down the ladder.

‘Cody Walker is clearly frustrated and he’s clearly not playing well and he seems to be the barometer for the mood of the team,’ he said.

‘The fact is Cody at some point has got to grow up he’s got to realise he is of value to the team beyond what he does with the ball in his hands. 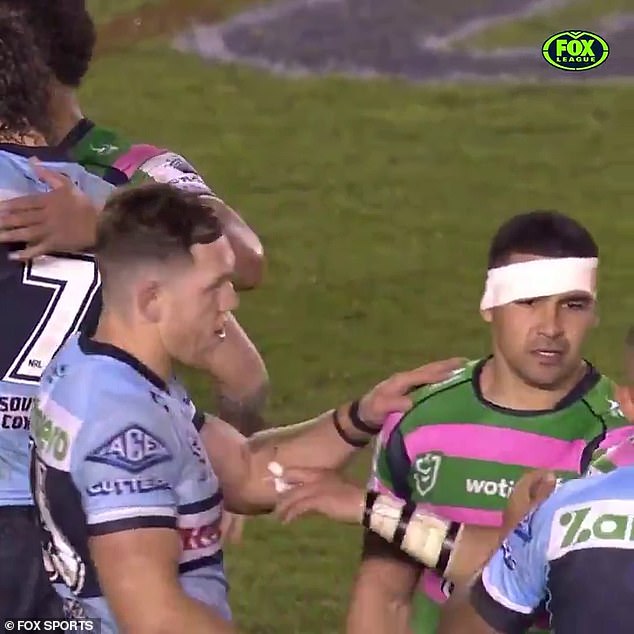 Dragons prop Aaron Woods revealed after their 32-12 win over the Rabbitohs in Round 15 that trying to get under Walker’s skin was a part of their game plan.

‘If we can get him off his game a little bit, try frustrate him and pressure him we know he does get a little bit angry,’ he told Triple M at the time.

‘The fuse is pretty short with him and you can get him off the game. That was part of it [the game plan].’

‘We need to see how the race pans out’: Toto Wolff drops Sprint team orders hint

Barcelona are now FAVOURITES to win LaLiga… so what crisis?