Recalled Queensland forward Jai Arrow has earned his State of Origin redemption shot while Murray Taulagi will debut as the Maroons aim to seal the series in Perth.

Arrow’s Origin future was clouded after he was axed from camp Maroon last season for breaching COVID-19 protocols.

The South Sydney workhorse was 18th man for the Maroons’ Origin I victory, but has been included as one of two additions to Billy Slater’s side to play at Optus Stadium on Sunday. 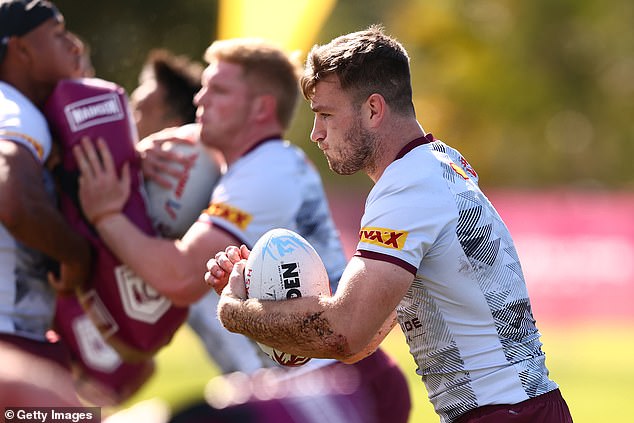 Powerful North Queensland winger Taulagi is the other change, the 23-year-old in for injured Melbourne flyer Xavier Coates.

Arrow will replace Lindsay Collins on the bench who will move into the starting forward pack.

Tino Fa’asuamaleaui will shift from prop to fill the void left by injured lock Reuben Cotter, whose herculean 80-minute effort in the middle on debut helped set up Queensland’s 16-10 upset win.

The South Sydney forward’s decision to invite a woman into the team’s Gold Coast camp last year breached the NRL’s strict COVID-19 protocols and prompted a fine and suspension from Origin III.

However new coach Slater absolved Arrow of his sins during a pre-series heart-to-heart and the 26-year-old is now poised to play the 10th game for his state.

Arrow’s ex-partner, former Miss World Australia Taylah Cannon, unfollowed the star after the news broke and it was revealed the woman in question was a ‘dancer’.

The Souths enforcer was fined $35,000 after he managed to sneak the woman past hotel and team security. 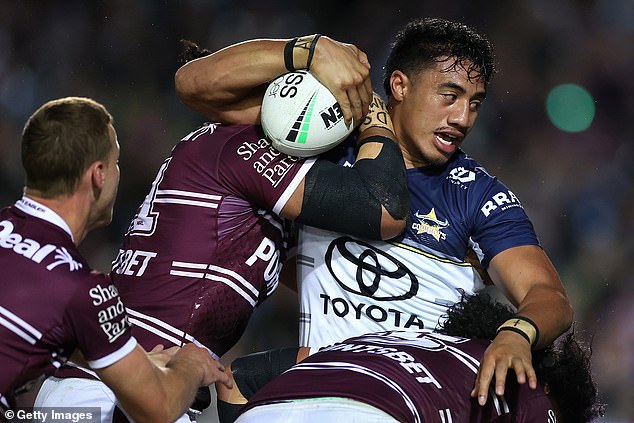 Brisbane winger Corey Oates and underrated Gold Coast backrower Beau Fermor have been added to the extended squad, while Reece Walsh replaced Hamiso Tabuai-Fidow (HIA) in Slater’s only changes forced by injuries in stark contrast to his NSW opposite.

The win in Sydney was Queensland’s first since 2017 and has put them in the box seat to blunt any notion of a Blues Origin stranglehold with a second series victory in five years.