Television reporters are supposed to put on a professional front, but the inner child in NRL legend Johnathan Thurston just had to escape during Channel Nine’s coverage of Magic Round in Brisbane.

Thurston, the two-time premiership winner with the Bulldogs and Cowboys, was sent outside Suncorp Stadium in the rain to grab some comments from fans attending the annual marquee event.

Fans were quick to mob the legend and began bouncing up and down while chanting his name. Sporting his trademark grin, Thurston couldn’t help but join in the fun.

He began to move with the excited fans, much to their delight, with supporters from a wide range of NRL clubs joining in the fun.

It is par for the course for Thurston, who has developed a reputation for his cheeky sense of humour and trademark laugh.

The footage brought joy to NRL fans online as well, with the moment captured on social media Instagram.

‘He will go down as one of the best players on and off the field, a true blue Aussie legend,’ said another. 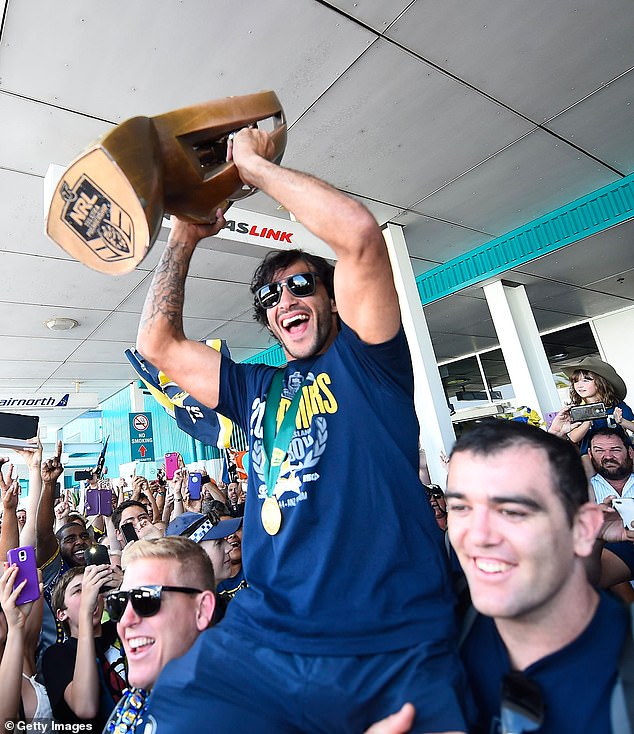 Thurston played 323 NRL games, winning a premiership off the bench with the Bulldogs in 2004 and delivering the Cowboys their maiden grand final appearance in 2005 and first and only premiership in 2015.

He was also part of the golden era for the Queensland Maroons, playing 37 games and scoring 220 points. He also earned 38 Test caps for the Kangaroos and won a record four Dally M Medals as the best player in the game.