MVP almost guarantees fireworks but the American drenched them here over five forgettable rounds at the SSE Arena.

The Brit is a deadly striker and made his rival look almost amateurish at times, until Storley, a decorated collegiate wrestler, managed to bring the fight into his world on the ground. 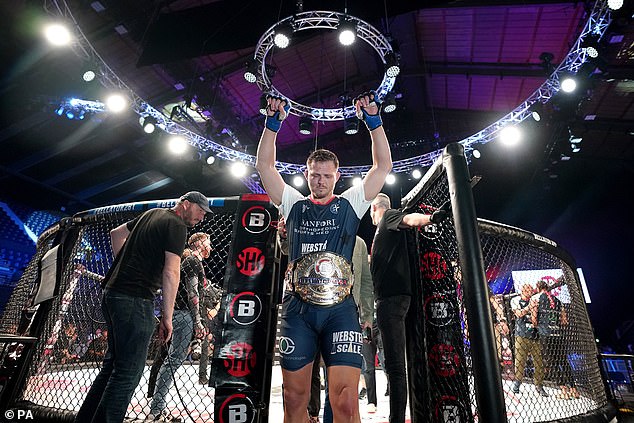 Even after what seemed like 25 minutes of relatively one-way traffic, one judge still saw it for the Londoner and the final scorecards read 48-47, 47-48, 49-46.

‘Boo me all you want,’ said the victor. ‘Look what happens when you stand with that guy.’ He then changed his mind and said: ‘Don’t boo me! See you on the way up.

‘His speed and distance is awkward and he’s so dynamic and I had to do what I had to do.’

In the first, MVP bounced on his toes with his hands down in that typical style of his. If you could only see the silhouette, it would still be instantly recognisable.

But Storley wisely shot for a takedown, grabbed an ankle, a toe, anything he could to avoid the stand-up battle.

The American spend the remainder of the first latched on like a leach but without advancing position or causing much damage.

Page’s resistance lasted longer in the second. He waggled a disapproving finger at Storley after a clumsy takedown attempt had the wrestler grasping at air.

But Storley then found the target and ended the round in a dominant position while managing to land a handful of strong shots.

It took 90 seconds of the third for the pattern to be repeated. MVP came out with more urgency, aware that the rounds were slipping away.

A beautiful lunging lead elbow had Storley’s back propelled towards the cage and a flashing uppercut narrowly missed the mark.

But the American then timed a single-leg attempt well when ‘Venom’ charged forwards. The home fighter resisted admirably and fought back to his feet but still found his rival clinging to him when the buzzer sounded.

MVP was still loose in the fourth, pretending to dribble an imaginary basketball and grinning throughout. 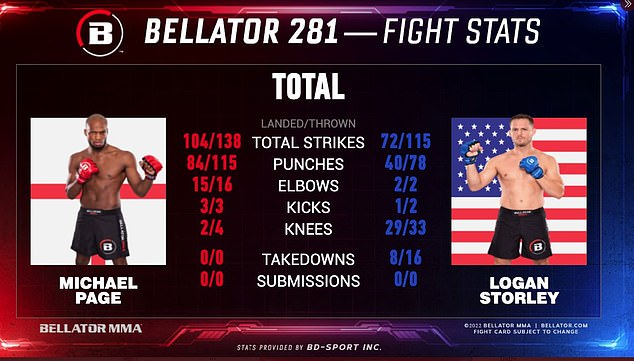 He picked Storley apart and the American barely even attempted a strike. He secured a late takedown but did very little with it and the first championship round belonged to the Londoner.

For all the cries of ‘stand them up’ and a cachophony of boos from the frustrated fans inside SSE Arena, Storley rubberstamped his performance in the fifth.

He still failed to inflict much significant damage but took advantage of a jumping knee to time an early takedown and spend the round on top.

Hagler vs Hearns it was not but there’s a blueprint to beat MVP and this is it.

Fabian Edwards added the legendary Lyoto Machida to his CV with a savage finish.

Machida, 43, has his best days behind him and the power, speed and athleticism was too much in the end.

The pair felt each other out and exchanged low kicks early on before Edwards exploded into life, dropping his man.

He then polished him off with a huge right hand on the ground and celebrated with his brother Leon on top of the cage.

Perhaps they’ll be doing the same again later this year when ‘Rocky’ has his UFC title shot against Kamaru Usman.

Paul ‘Semtex’ Daley signed off on his stellar career in the perfect fashion. He detonated a huge right hand in the second round of his farewell fight against Wendell Giacomo.

Daley, who amassed a record of 44-18-2, spent much of the fight resisting submission attempts but as ever, had that incredible power to fall back on.

‘I’m emotional to have all these people here, I love you all, if it wasn’t for the fans I wouldn’t be here so thank you,’ he said.

‘He is a tough guy and you can’t overlook anyone. I wasn’t here to quit tonight, I was here to knock somebody out.’ 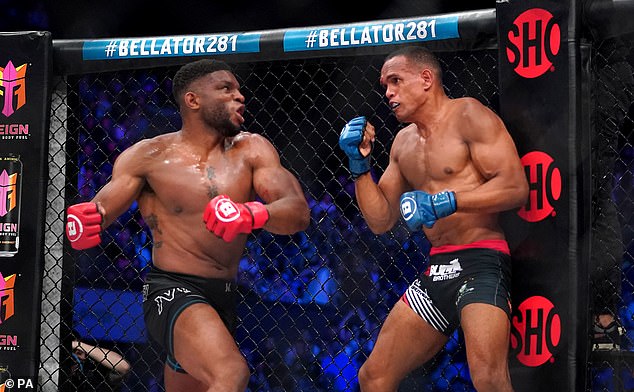 EDEN CONFIDENTIAL: Earl of Snowdon, 60, steps out arm in arm with his new love

Arsenal: ‘AirPod Albert Stuivenberg’ will fill in for Mikel Arteta vs Man City