Aussie tennis star Nick Kyrgios got a surprising reaction when he rushed to help an elderly fan who was hit in the face by a stray ball during his match at the Citi Open on Wednesday.

The Wimbleon finalist was taking on America’s Tommy Paul in the tournament in Washington DC when his return of serve bounced over the partition and struck a woman in the head as she sat in the front row directly behind the baseline.

After Paul went over to check on the fan as she held her face in her hands, Kyrgios gave her one of his towels as a souvenir in a touching gesture – only for the woman to turn to the fan next to her and ask, ‘What is this for?’ 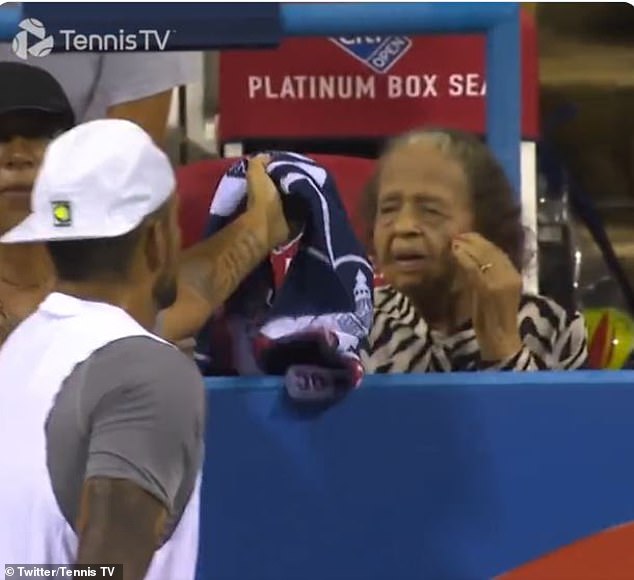 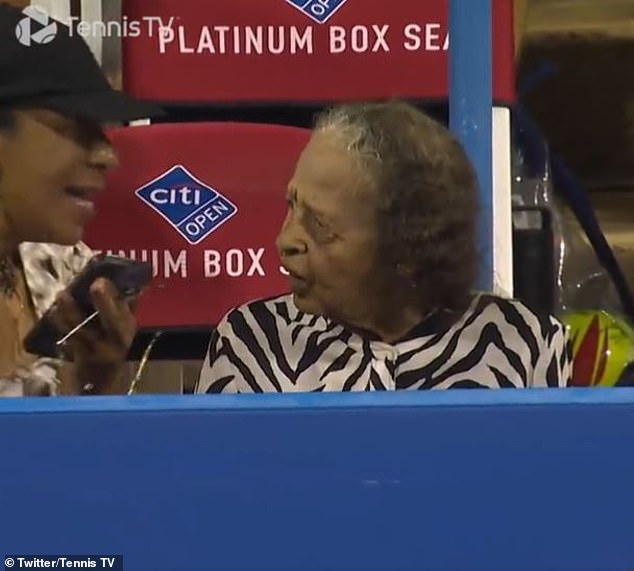 She then turns to the spectator next to her and asks, ‘What is this for?’

Kyrgios went on to take the match 6-3, 6-4 to progress to the round of 16, where he’ll face fourth-seeded American Reilly Opelka, who is the equal-tallest player in the history of the ATP tour at 211cm and packs a devastating first serve.

He’s also due to face Edouart Roger-Vasselin and Nicolas Mahut in the quarter finals of the men’s doubles.

Fresh from winning the doubles title at the Atlanta Open earlier in the week, the Aussie is continuing the great run of form that took him to the brink of the singles title at Wimbledon.

His serve wasn’t broken once during the win over Paul, during which he joked with fans and asked them where he should hit the ball.

It hasn’t been easy for him to bounce back from his Wimbledon defeat at the hands of Novak Djokovic, though. 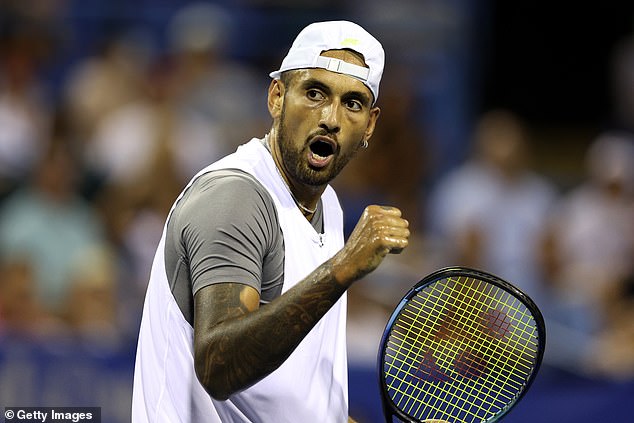 The Aussie’s run of good form, which dates back to his lead-up to Wimbledon, is continuing at Washington DC’s Citi Open

‘It took me a while to get over that loss,’ he admitted after beating Marcos Giron in straight sets in the match prior to his victory over Paul.

‘Ever since I picked up a racquet, that’s always been the goal that I was told, a Wimbledon final, a Wimbledon championship … the highest accolade you can achieve.

‘I was so close I almost tasted it. So it was really hard for me to stomach that loss but I feel like I’ve done everything I can to bounce back.’

Despite his reputation as tennis’s bad boy, Kyrgios is known for making kind-hearted gestures to spectators, officials – and even entertaining everyone courtside by joking with a Hollywood star. 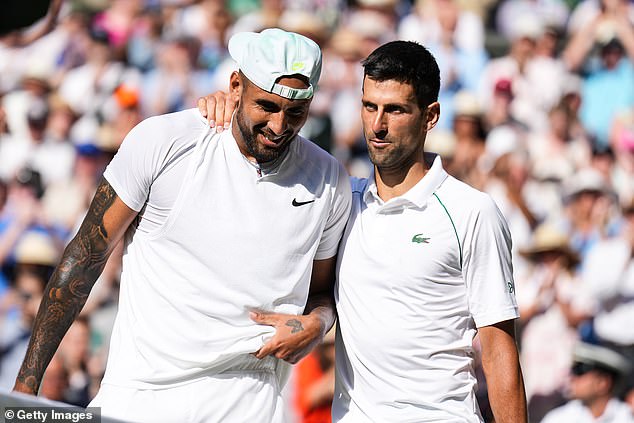 The loss to Novak Djokovic in the Wimbledon singles final hit Kyrgios hard. ‘I was so close I almost tasted it … it was really hard for me to stomach,’ he said

At this year’s Australian Open he threw his racquet to a young fan during a doubles match with his good friend Thanasi Kokkinakis.

He also gave an eight-year-old boy at the same tournament a signed racquet after making him cry when he angrily smashed a ball off the court, directly into the child’s face.

The 27-year-old made headlines around the world in March when he roped Ben Stiller into a conversation as the movie star sat courtside during his loss to Rafael Nadal at America’s Indian Wells tournament.

He asked a heckler if he was good at tennis, and when he replied that he wasn’t, Kyrgios shot back: ‘Exactly, so don’t tell me how to play,’ before pointing at Stiller and saying, ‘Do I tell him how to act? No.’

Stiller later tweeted about the incident, to which the Aussie responded: ‘Thanks. Maybe we can start working on the next film together, I think I got some acting in me. How is your tennis?’

Stiller wrote, ‘I could use some help with my serve but maybe a new doubles team? We can discuss it on set.’

Paul Pogba to Man City is a ‘no-brainer’, says Redknapp… but Carragher ‘wouldn’t go near him’