Norwich City’s supporters started the chant. Then the Everton end joined in. Rafa Benitez discovered what it is like when an entire stadium think you’re getting sacked in the morning here.

If somehow that chant didn’t register with the Spaniard then it was drilled home when a fed-up fan invaded the pitch from the away section and charged straight towards him.

Stewards stopped the supporter before he could reach Benitez but the mood towards this manager is clear. They want him out of their club after this result, that might happen.

Supporters took aim at the board, too, calling for their heads. It’s ugly at Everton right now. 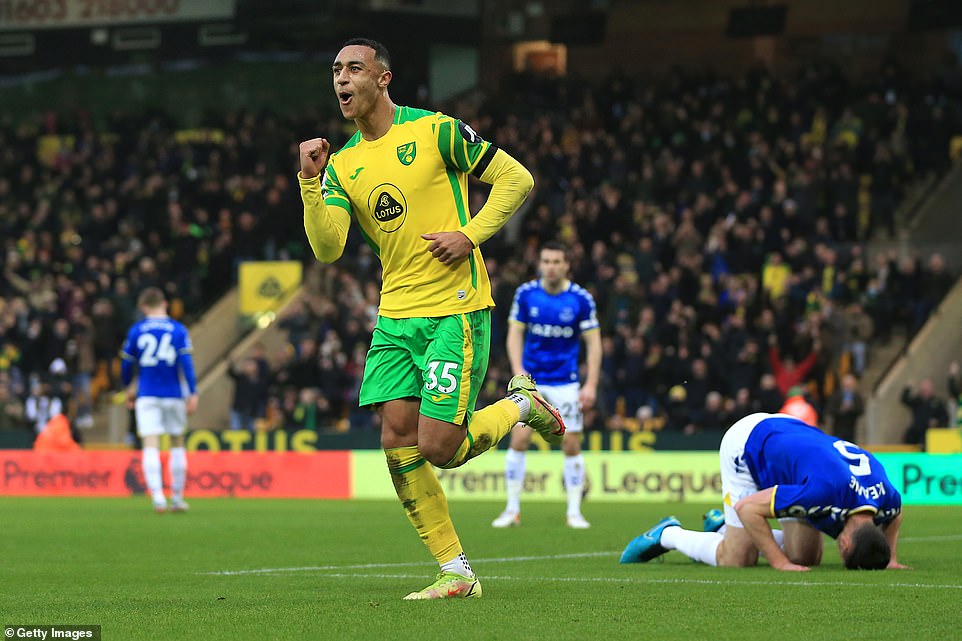 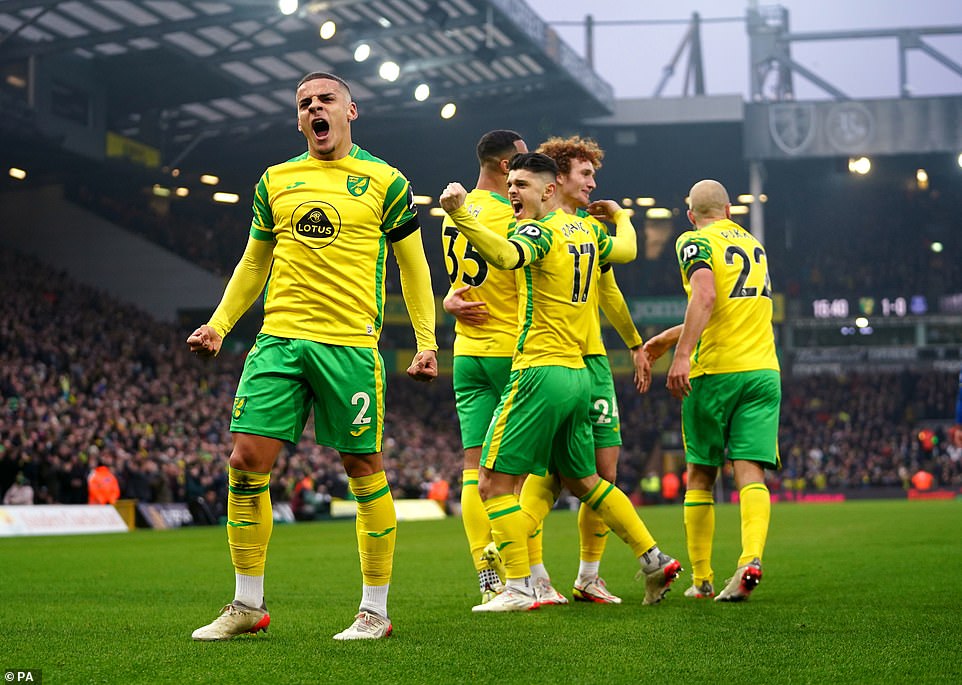 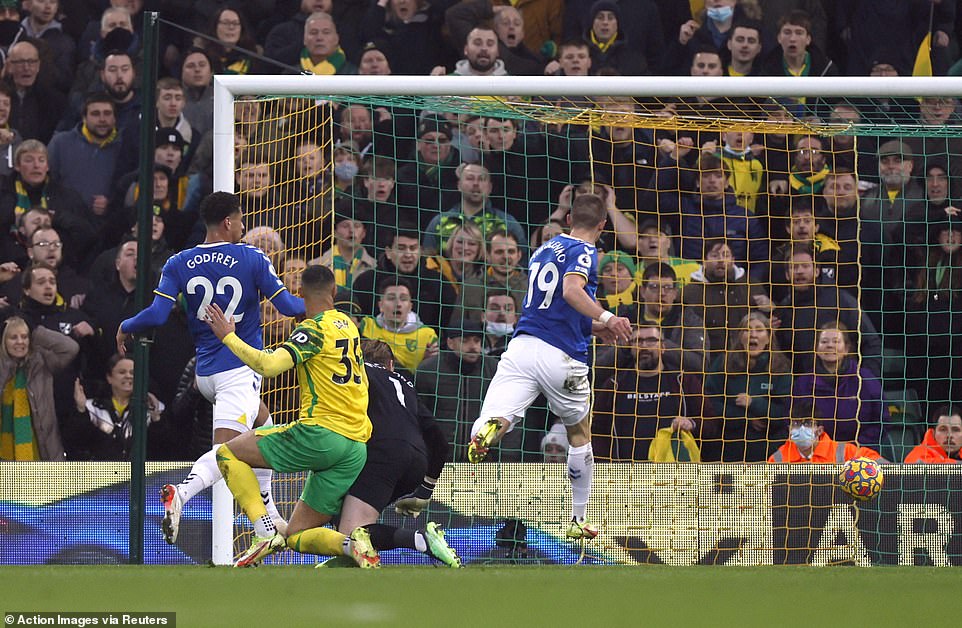 Twenty per cent of Norwich’s goals this season came in this game. They took a 2-0 lead in the first half, thanks to Michael Keane’s own goal and Adam Idah’s finish to a counter-attack.

Richarlison’s excellent overhead kick gave Everton hope but they never followed up on the threat of getting an equaliser. It means Benitez’s side have now lost nine of their last 13 Premier League games. They aren’t above a relegation scrap.

The relieved roar at full time told you what a vital win this was for Norwich. Finally, they’re off the bottom of the table for the first time since December 3. They believe.

After failing to score in any of their last six Premier League games, Dean Smith decided to give Teemu Pukki some company up front. He placed Idah alongside him in the hope that they could trouble Ben Godfrey and Michael Keane together, and that they did. 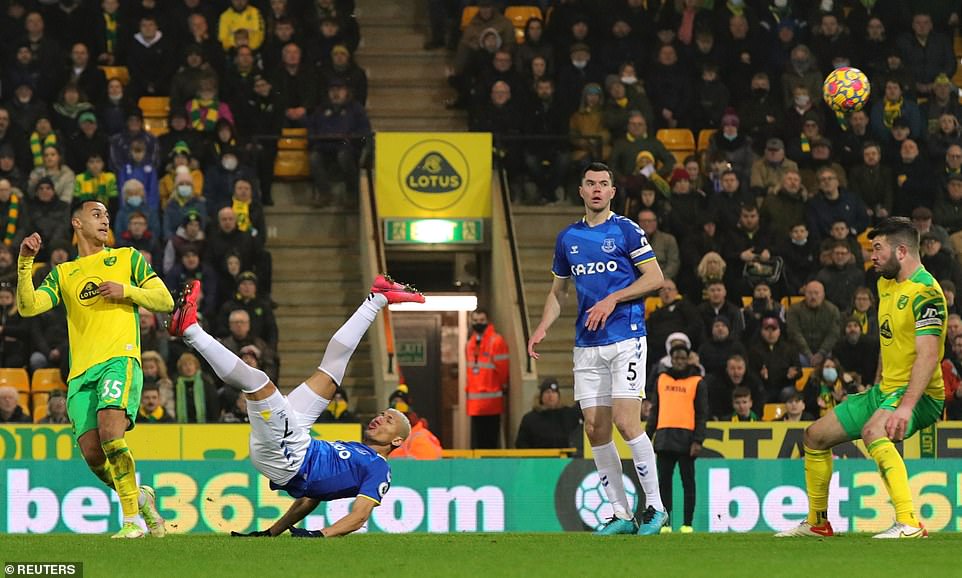 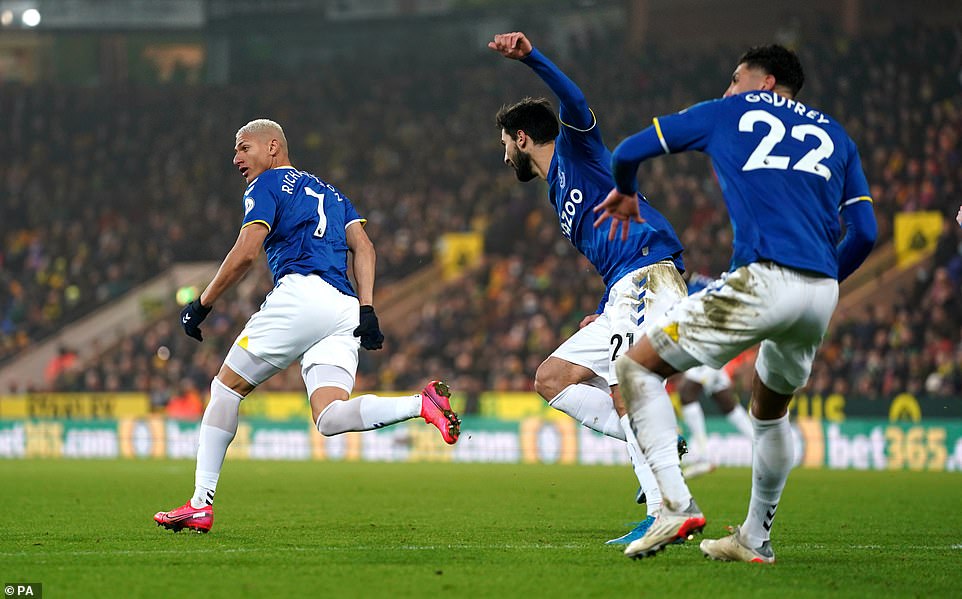 In the 16th minute, Norwich had the lead. Joshua Sargent produced a low cross towards the six-year box. It was troublesome but no Norwich players were in the vicinity to bury it.

Not to worry, because Keane’s decision to stick out a lazy leg was costly. He toe-poked the ball beyond Jordan Pickford at his near post and it was 1-0 to Norwich.

The hosts fancied scoring one for themselves and they did in the 18th minute. It started with Brandon Williams getting to the ball ahead of Anthony Gordon in his own half.

Williams then charged forward before playing a perfectly-timed diagonal pass inside for Idah, who beat Pickford. A killer counter-attack and it was 2-0 to Norwich.

Funny how you wait for a first goal since November then two come along in 92 seconds. 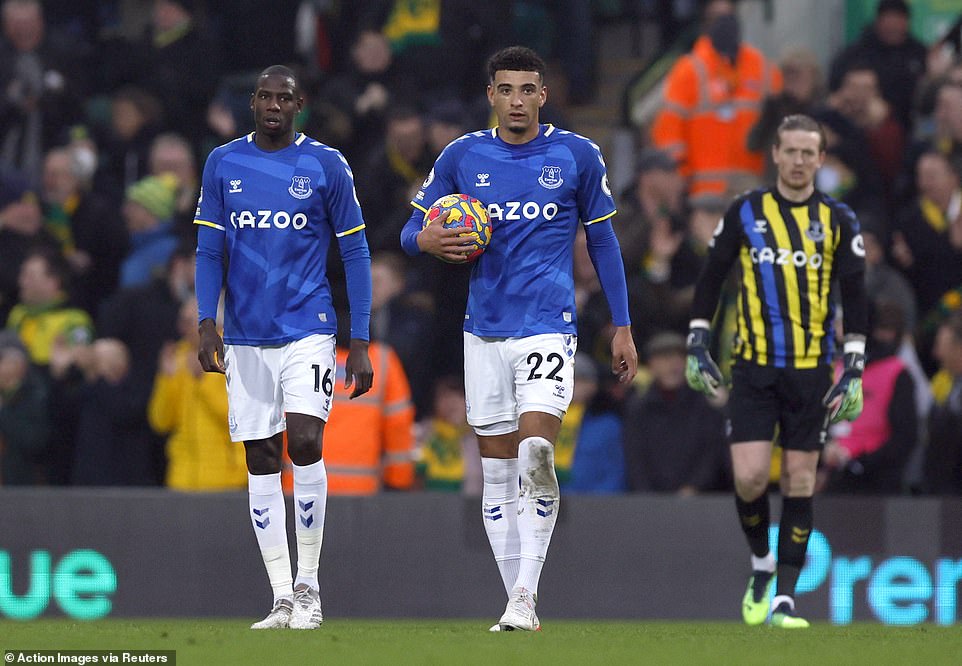 Abdoulaye Doucoure, Ben Godfrey and Jordan Pickford look glum after going 2-0 down to the side bottom of the table 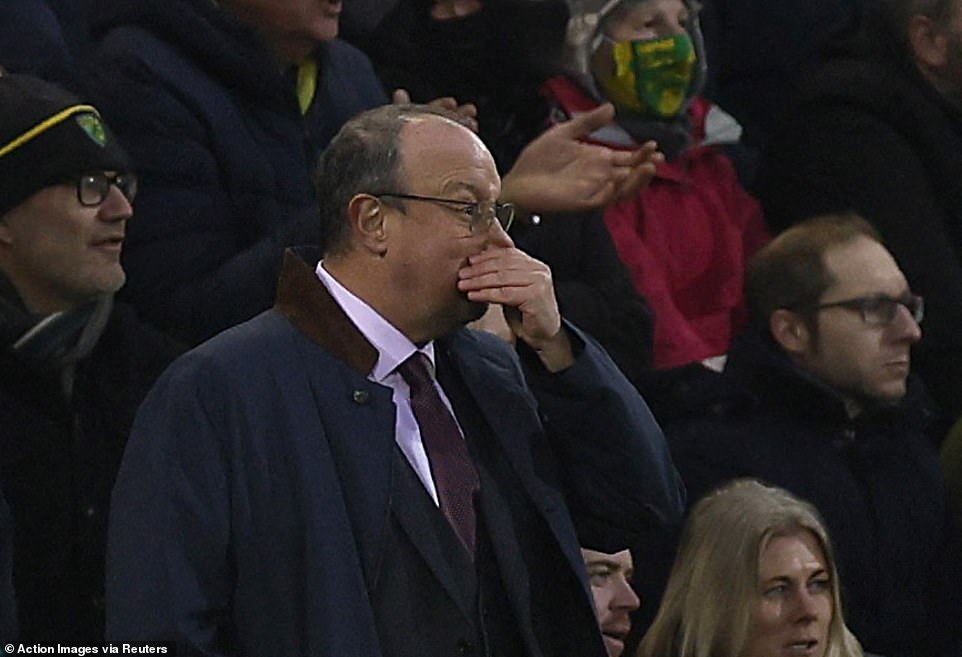 Everton were making Norwich look like Brazil in those bright yellow shirts. Midway through this first half, a fan escaped the away end and ran for Benitez, a steward in tow trying to catch him. He was stopped before he could reach the former Liverpool manager but the V signs he flicked while being shown the exit emphasised his point.

As half time approached, it felt strange that there had been no substitutions by Everton – no attempt at changing the complexion of what had been a depressing performance. Richarlison was on the bench, along with new signing Anwar El Ghazi.

Benitez didn’t make any changes at the break either. The last time Norwich went in with a two-goal half-time lead in a Premier League game was in May 2016 against Watford. All they had to do was hold on for a huge win which would lift them from the bottom of the table.

They could have made it 3-0 in the 51st minute when Vitali Mykolenko inexplicably tried to pass the ball back to Pickford, not realising Idah was there. But the Norwich forward couldn’t round the England goalkeeper. That would have been goodnight Everton. 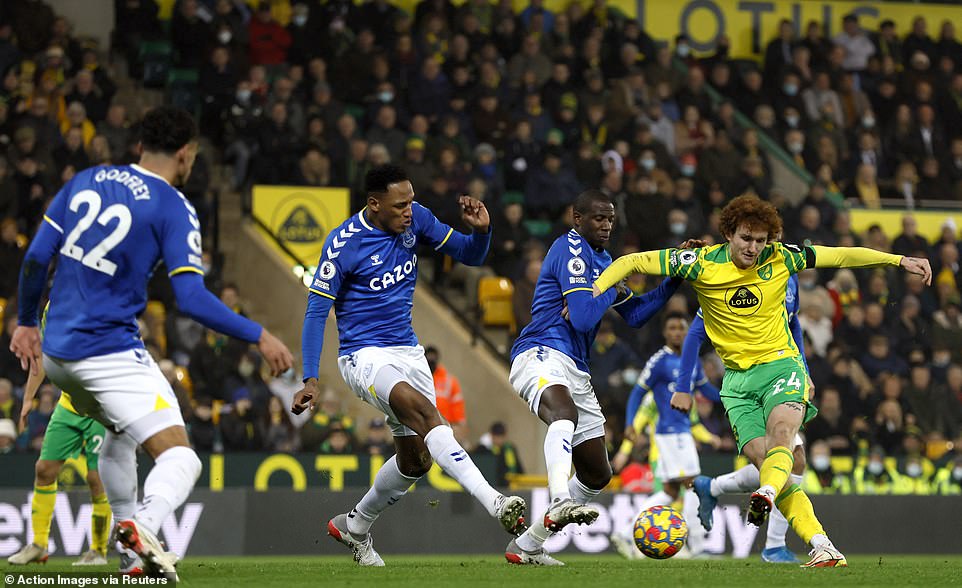 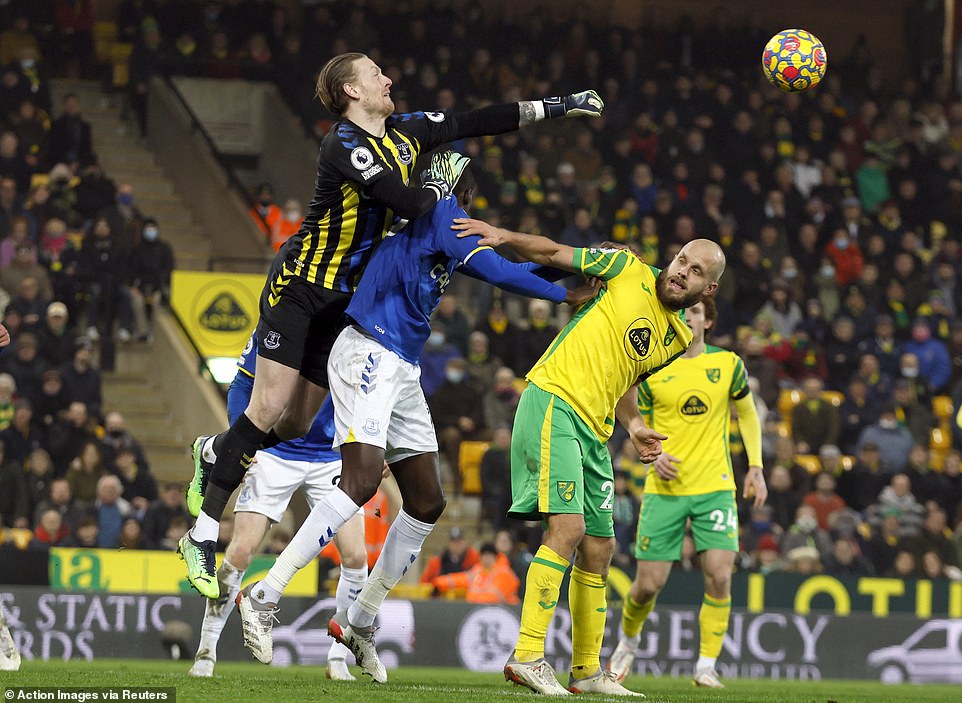 Instead, it was 2-1 after an hour. Krul tried to punch clear a cross which took an age to come down but was under pressure from Godfrey and Yerry Mina. The ball floated towards the penalty spot where Richarlison produced a remarkable overhead kick.

The finish was one worth admiring. Richarlison smacked the badge on his shirt towards the visiting supporters. Everton were back in this.

Both of Norwich’s full backs needed substituting as we entered the final 15 minutes. Brandon Williams seemingly because he could not stop getting cramp, and Max Aarons after kicking Richarlison while trying to clear the danger. 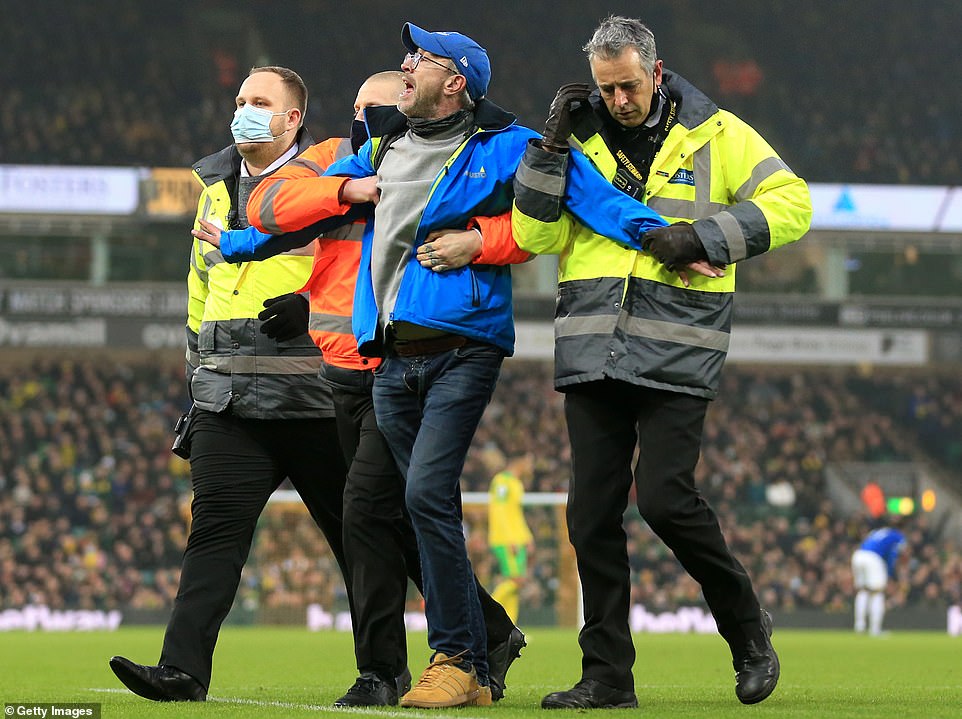 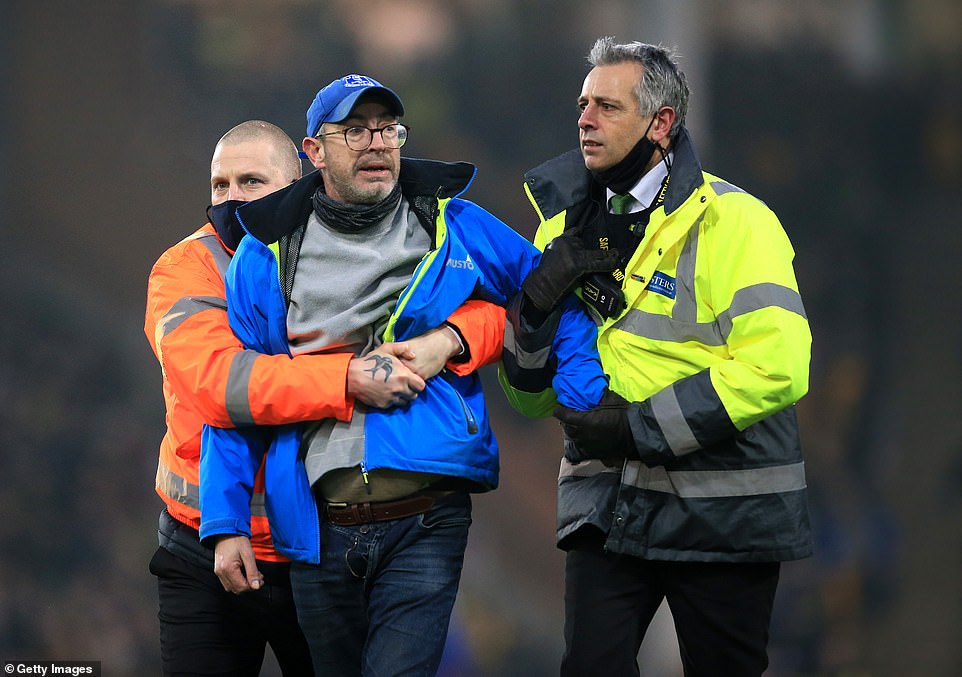 Gordon had an opportunity to score when the goal seemed at his mercy but Dimitris Giannoulis blocked magnificently. Krul then denied Godfrey when he tried to find the far corner.

Seven minutes of stoppage time were not well received by Norwich’s nervous supporters. Yet Everton barely threatened to equalise. They were still passing it around at the back with very little sense of urgency.

With the last kick of the game, Norwich’s Milot Rashica hit the post. Referee Andrew Madley blew his whistle, and it was defeat for Benitez. His last? We’ll see. 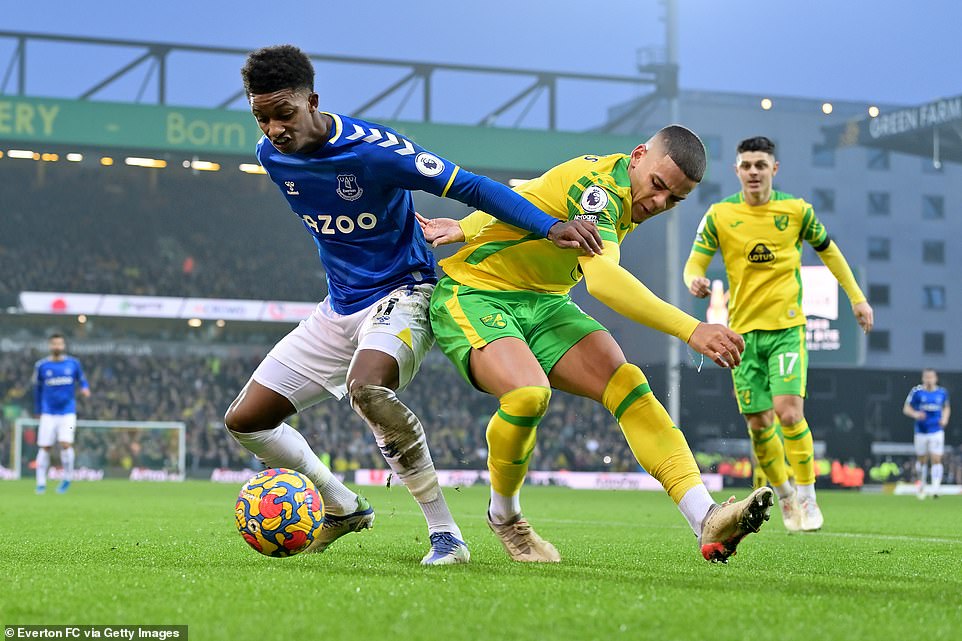 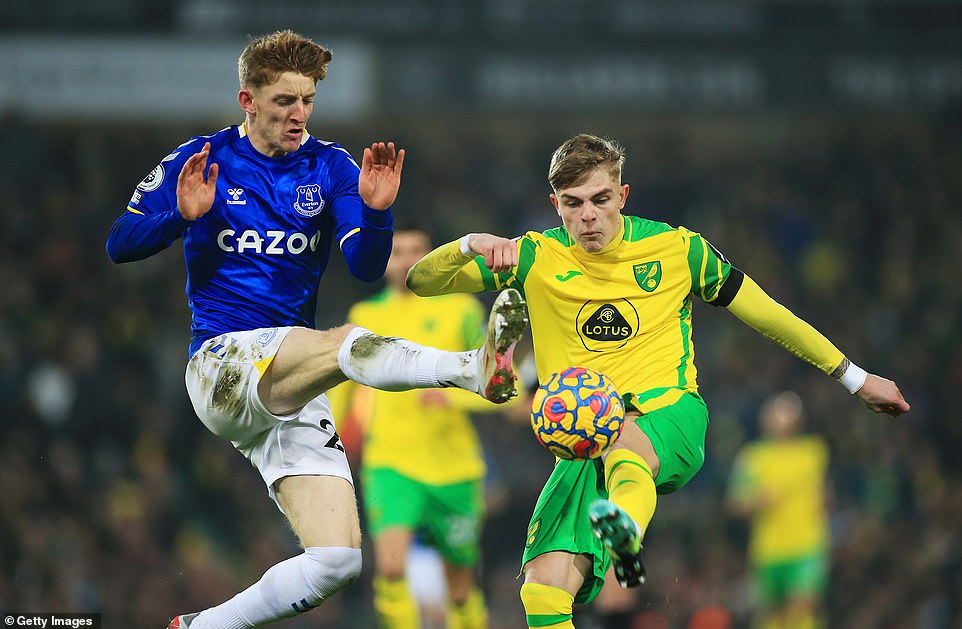