Queensland will ditch the iconic XXXX brand for the upcoming State of Origin clash against NSW in a drastic change for the Maroons, Selwyn Cobbo’s uncle has claimed.

According to the winger’s relative, the beer brand will make way for a unique postcode for each player representing the area where their junior footy club is located.

‘4605 will replace XXXX on one of the sleeves.. Each player will have the Post Code of their Jnr Club on the sleeve. Mad,’ he shared on Facebook.

A representative from Queensland Rugby League confirmed the development with Daily Mail Australia on Wednesday morning.

NSW star Payne Haas revealed earlier this month that he wishes to follow in Sonny Bill Williams’s footsteps and ask for the logos of betting and drinking firms removed from his jerseys.

Haas, 22, became a Muslim in early 2019 and has designs to be a ‘leader for Islam’ through his rugby league exploits, like former All Blacks superstar Sonny Bill Williams.

Back in 2017, the Kiwi star was given permission to cover up a banking sponsor on his Auckland Blues rugby shirt as his Islamic faith forbids financial institutions charging interest and fees on loans. 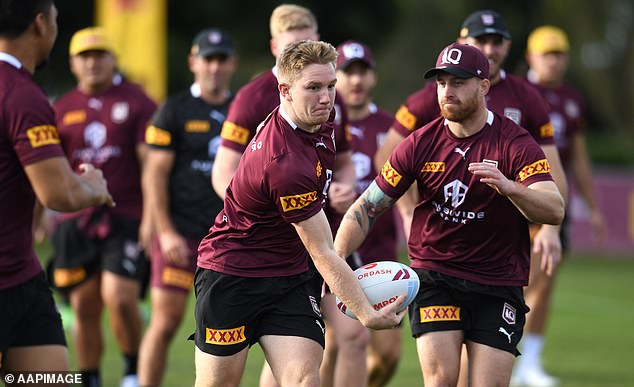 And the Broncos prop says he is keen to follow in the Kiwi’s footsteps.

No conversations have been held with the NSWRL over the possibility of covering up brand logos which are not agreeable to Islam, but it is a subject he wishes to discuss.

‘There is going to be a time when I’m going to align with it and I want to be a leader for Islam and for Muslims,’ Haas told the Sydney Morning Herald.

‘Hopefully I can do that one day, inshallah, God willing and can be at the forefront of that, the way Sonny is at the moment.’ 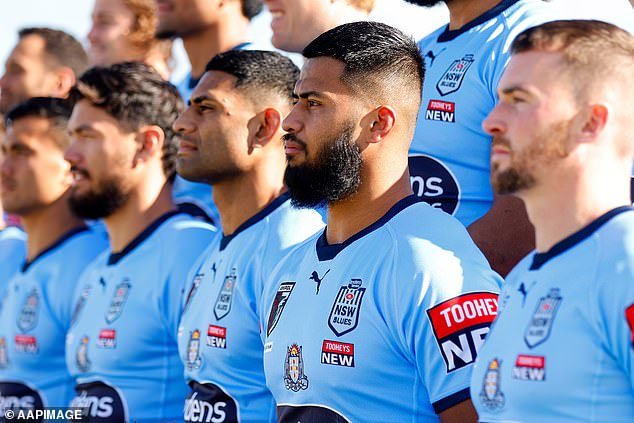 NSW and Broncos star Payne Haas (pictured second from right), recently revealed he wants to discuss removing booze and gambling logos from his jerseys as they do not sit well with his Islamic faith

Brisbane have been associated with beer firm XXXX for some time but Haas did not single out the brand when detailing how alcohol and betting companies ‘destroy lives’.

‘If I get everything in order in my life, I want to be a leader in that way as well.’