He’s no Saint: New Orleans rookie offensive lineman Trevor Penning is BOOTED from practice for his third scuffle in as many days as head coach Dennis Allen pleads with his players to ‘not take it over the edge’

Defensive tackle Malcolm Roach was also kicked out of practice for the fracas, after which, new Saints head coach Dennis Allen blasted his players.

‘We don’t have time for that,’ Allen said, as quoted by ESPN. ‘I sent two guys in today and we’ve got to get our work done. We’ve got to learn as a team how to compete and how to play and how to practice and push ourselves to the limit but yet not take it over the edge.

‘… It’s not unusual for something like that to occur in training camp. It’s certainly something we don’t want to see happen. It’ll be addressed and we’ll move forward.’ 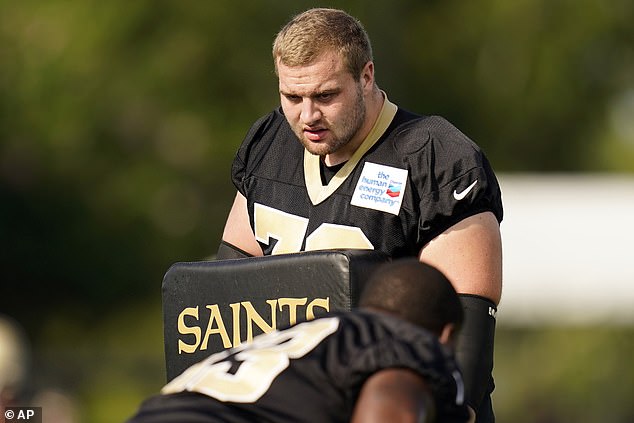 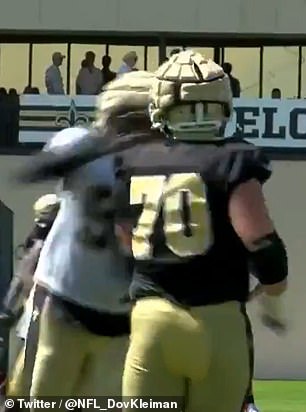 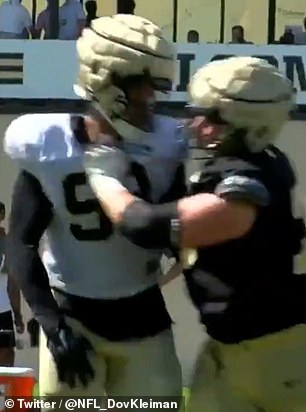 New Orleans Saints rookie left tackle Trevor Penning (No. 70) was booted from Wednesday’s practice following his third scuffle in as many days. Defensive tackle Malcolm Roach (in white) was also kicked out of practice for the fracas, which was caught by New Orleans’s Fox affiliate 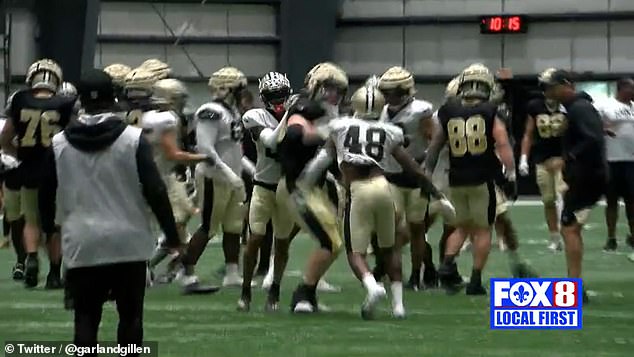 Tuesday, Penning squared off with safety JT Gray (No. 48) in a similar shoving match

The incidents have quickly become a pattern for Penning, a former first-round pick out of Northern Iowa who once said his favorite thing about football was ‘legally assaulting the person across from you.’

Monday, Penning and 2021 first-round pick Payton Turner ended up in a shoving match before quickly exchanging blows and being broken up by teammates.

‘It’s football; we’re competing,’ Penning said Monday. ‘It’s a tough game for tough people and you’ve got to be able to take that. There’s no bad blood between us. We’re just competitors competing.’

Tuesday, Penning squared off with safety JT Gray in a similar shoving match.

Penning’s teammate, center Cesar Ruiz, said the problems arise because Penning has an offensive lineman’s mentality to finish every block.

‘It’s like, when you think he’s done, he’s not done,’ Ruiz said, as quoted by ESPN. ‘He definitely has that finishing mentality you love in an offensive lineman.’

Penning agreed: ‘It’s part of my game, I think. It’s just how I am as a player. But I’m obviously out there working technique. I’m trying to get better at the technique of the game, getting the blocks down. The finishing ability, that’s what I pride myself in, and that’s always going to be part of my game.’