Manchester City completed the signing of Borussia Dortmund superstar Erling Haaland and announced his arrival at the club by replicating a picture from his youth.

The original photo of Haaland shows him wearing the 2008-2009 Manchester City shirt while sitting on a black a grey sofa with a pillow either side of him.

Haaland’s father had left the club five years prior to that photo being taken and things at City had changed. Sven-Goran Eriksson was in charge of the Citizens and Richard Dunne was the captain.

Therefore, when the Citizens announced the £51million signing of Haaland earlier this week, they drew reference to the old photo.

The 21-year-old recreated the famous shot from his youth by wearing the club’s 2022-2023 kit while sitting on a similar sofa.

So, with that in mind, Sportsmail have looked at the best and worst transfer unveilings over the years… 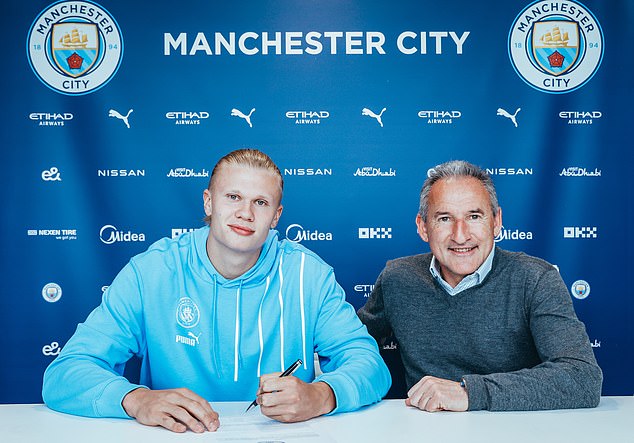 Erling Haaland has signed a five-year contract at Manchester City, joining for £51million 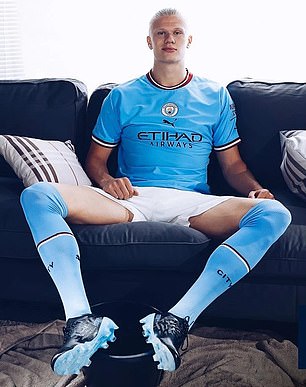 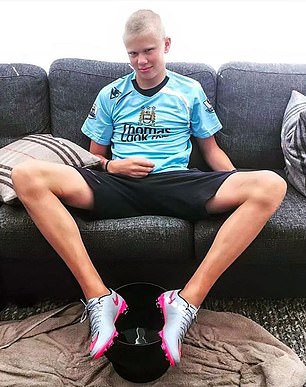 Aston Villa jumped on the Love Island hype to announce the signing of Andre Moreira back in 2018.

The Premier League giants released a video which included a clip of a Love Island contestant receiving a text.

However, it wasn’t any regular text. The message appearing on the screen announced that Moreira was joining the ‘Villa’.

They then included the hashtag ‘#HesAKeeper’ to draw reference to the facts he was hoping to base himself between the sticks for Steve Bruce’s side.

A clever play on words, but really?

Hindsight is a wonderful thing and no one will know that better than Manchester United after this transfer announcement.

United’s announcement video for Alexis Sanchez is nothing short of awful, considering how badly he flopped at Old Trafford.

The clip features him sitting at the piano playing ‘Glory Glory Man United’ and standing proudly in the middle of their iconic stadium.

It’s safe to say his rendition of the song was the best performance he gave all season – having failed to impress the fans or Jose Mourinho with his abilities on the pitch.

Jesus Navas back to Sevilla

Sevilla marked the return of club legend Jesus Navas in one of the most bizarre ways. The Spanish giants staged a kidnaping to reveal that fact their star player had returned.

Yes, you read that right.

The video started with him being watched on the streets of Seville before two men put a black bag over the his head and bundled him into the back of a car boot.

The Spaniard was then driven to the Ramon Sanchez Pizjuan Stadium and brought into the stands before being let free.

Ricardo Quaresma’s announcement at Vitoria de Guimaraes is probably one of the most outlandish clips we have ever seen.

It was shot at a medieval castle and saw him waited on hand and foot by a butler. He was also offered a Mustang car before emerging on a white horse.

The video was to mark his return to his native Portugal with the Primeira Liga after spending five years in Turkey with Besiktas and Kasimpasa respectively.

What is it with top-flight clubs and using a play on words to announce their new signings?

Crystal Palace decided to announce the arrival of Max Meyer at Selhurst Park by referring to him as the ‘Meyer of London’.

Palace signed the Germany midfielder on a free transfer in 2018 after his contract expired at Bundesliga runners-up Schalke.

He was the club’s third signing of the summer but probably their most cringeworthy announcement.

Barcelona decided to create a new character for their Arthur Melo reveal. They designed a talking football which resided at the Nou Camp and spoke about the history of the club.

Although it was intriguing, it was bizarre how the majority of the clip consisted of the ball talking about the current players rather than Melo.

The video spoke highly of Messi, Coutinho, Busquets, Pique, Rakitic and Dembele before briefly mentioning Melo at the end.

It was a missed opportunity for Barcelona as they failed to mention Melo’s skills and ability despite the video being created to show him off.

It’s not to everyone’s liking but I can appreciate this one. Southampton mocked the trend of dramatic new signing announcements by releasing a theatrical trailer for reserve goalkeeper Stuart Taylor’s one-year contract extension.

The trailer begins with the message: ‘Here it is… another unnecessarily elaborate football club signing video’ as it cuts to clips of helicopters and boats approaching Southampton’s St Mary’s ground, accompanied by a thumping drum beat.

Negative film reviews then flash to screen, slamming the plot for being ‘needlessly over-complicated’ and demanding the club ‘just announce the f******* signing’.

Armed officials are shown preparing to storm into an undisclosed location and a series of close up shots of an unidentified man build the tension.

Poking fun at Salah’s announcement, a series of tweets urging Saints to ‘announce Taylor’ spin onto screen as the trailer reaches its conclusion… before it cuts to an anticlimactic shot of Taylor relaxing in his garden.

And finally Taylor turns to face the camera and raises his cup of tea, before a message flashes up on screen confirming his new one-year deal – the video is accompanied by the cheeky caption ‘Are we doing this right?’

Yeovil Town took to the popular dating app Tinder to reveal the signing of Oscar Gobern on a free transfer in 2017.

A short video on the club’s Twitter account showed them swiping left – to indicate they didn’t like – Lionel Messi, Neymar, Ronaldo and even former Swansea striker Lee Trundle, before settling on Gobern.

Shortly after Yeovil made the first move, Gobern returned the compliment and club and player were matched.

So Roma decided to combine to two when they announced the arrival of Lorenzo Pellegrini’s return to the club.

Pellegrini was mocked up as a Roma player in FIFA17 and played as himself during the video clip.

The Italian attacking midfielder was seen scoring a sensational goal from the edge of the box.

John Terry was introduced as an Aston Villa player via an intricate and slightly bizarre series of animated WhatsApp messages.

The coaching staff were seen discussing the potential arrival of JT before he was added to the group chat.

Agbonlahor then referred to Terry as the best defender the club had ever had. This saw the likes of McGrath and Mellberg leave the chat.

The video clip ended with Terry suggesting he’d be taking the No 26 shirt off Jonathan Kodjia – which turned out not to be a joke.

Yeovil Town made the most of a new Snapchat feature in 2017 to announce the arrival of former Palace academy star Jake Gray.

The club – who are known for their hilarious player announcements – released the news that they had signed Gray by using SnapMaps.

The midfielder was seen standing in the middle of the pitch at Huish Park on the social media app.

The names of nine former Gunners signed by Arsene Wenger were listed, with the first letters of each of their names spelling out ‘Kolasinac’.

The first Arsenal fan to pass this IQ test was greeted with a four-second self-taken video of the Bosnian defender.

Tottenham opted for a somewhat melodramatic montage when it came to announcing Georges-Kevin N’Koudou.

They mixed blockbuster orchestral music with videos of N’Koudou doing stepovers in his training kit.

The video then saw thousands of headlines about the Frenchman’s transfer fly across the scene.

Before finishing with the hashtag: #N’Koudousigns. Catchy.

West Ham completed the signing of Lucas Perez from Arsenal on a three-year deal in 2018 and announced the news on social media in a unique way.

The Hammers released a video that featured Perez using the Fantasy Football app. He was in the middle of selecting his team when his name popped up alongside the other West Ham forwards.

The caption posted alongside the video read: ‘Is this the real life? Is this just fantasy?’

Karl Stefanovic is seen with Panadol at the 2022 Logie Awards... after he arrived DRUNK to Today

Newcastle United: Unai Emery hints he could depart Villarreal to take over as manager