‘This is a dream, an absolute dream’: Alex Scott leads pundits in showering praise on England after they beat Germany to become European champions… as ‘shocked’ Ian Wright hails Lionesses ‘amazing’ achievement

England have secured their first major trophy with an extra-time win over Germany at Wembley.

Sarina Wiegman’s Lionesses took the lead in the second-half with a goal from Ella Toone, before Lina Magull equalisied for Germany to take the game into extra time.

After a tense first period of extra time Chloe Kelly wrote her name in footballing folklore with the winner on 110 minutes.

Ian Wright: Finally. Finally. I can’t even put into words the amount of work that has gone into this. I can’t believe it. I’m so proud of the team, I’m still a bit shocked. Amazing.

Germany are an unbelievable nation. Unfortunately they lost their top player. We’re in a different place now.

What is great is that everyone knows their role. They’re happy to come off the bench and play their role.

Alex Scott: This is a dream, an absolute dream. This a dream for every young girl that dreamt of playing football. It’s incredible. Every single player has played their part. The way teams play as a whole determines their success.

Jonas Eidevall: It shows a team who just knew their roles. You can just see the energy Chloe Kelly brought, she was encouraging the crowd.

(On Arsenal star Beth Mead) Beth has been amazing and Leah hasn’t put a foot wrong in the tournament. She’s been a phenomenal leader.

Chloe Kelly: Oh my god! Look at them! Look at them! It’s amazing, this is unreal. (Sings Sweet Caroline) Honestly, it’s amazing. Thank you everyone who came out to support us. It’s unbelievable.

Thank you to everyone who played a part in my rehab. To be here and score a winner, it’s special. All my family are here, my sister, my nephews, everyone. I just want to celebrate now. 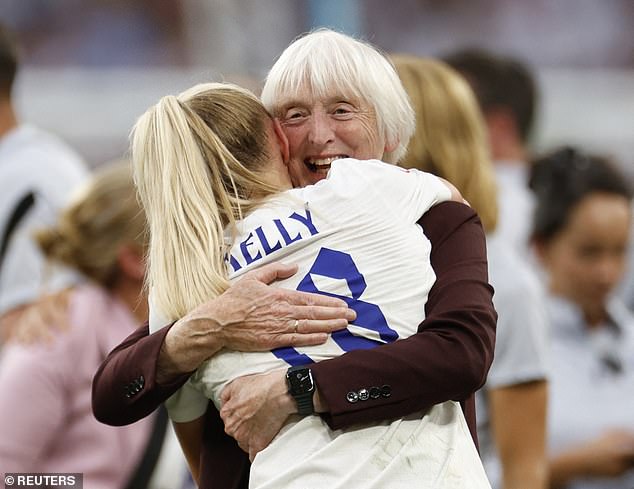 Sarina Wiegman: It’s unbelievable, I don’t even remember what you asked me, it’s incredible. What makes us so incredible? Do you have half an hour?! Their will to win, every single day, they want to do it together. This is the result, it was so tight, who cares, we won 2-1 and we’re European Champions.

They already broke through barriers against Spain and they did it again. I don’t have any secrets, I am very open.