Former Tottenham star Jamie O’Hara believes Arsenal will ‘crumble’ in the top four race if they lose Thursday’s pivotal north London derby – and says the side that copes best with the ‘electric’ atmosphere will prevail.

Spurs go into the crucial showdown at the Tottenham Hotspur Stadium needing to avoid defeat to keep their Champions League hopes alive – with their bitter rivals four points ahead of them in the Premier League table.

But O’Hara claims the pressure is all on Arsenal, who will have to cope with an ‘electric’ atmosphere at the Tottenham Hotspur Stadium and says whoever has ‘cool heads in the fire pit’ will come out on top. 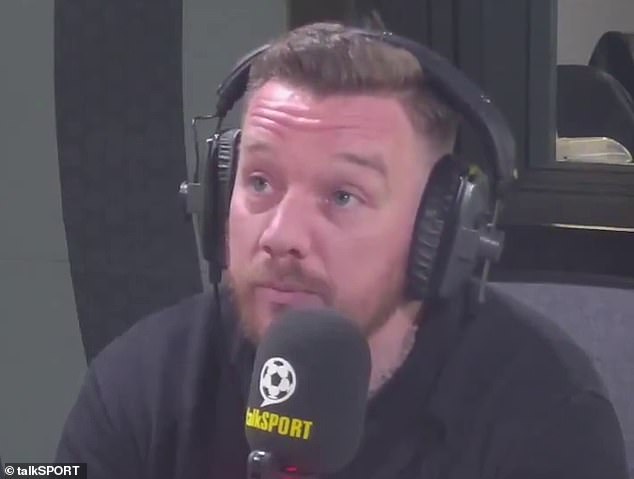 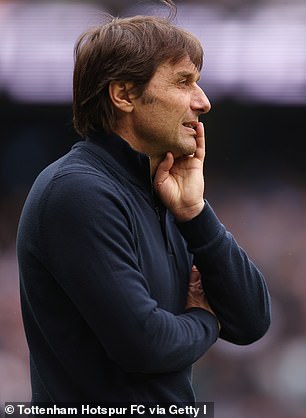 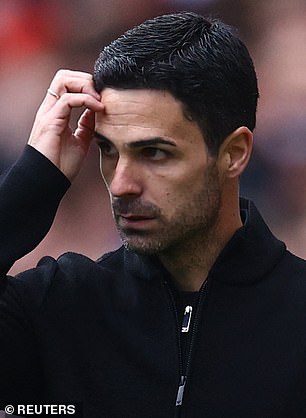 ‘I think it’s a huge pressurised situation for both teams and it will be about who handles that better,’ O’Hara told Sportsmail, in association with Grosvenor Sport.

‘Who’s got the experience? Who’s got the tactical nous and who’s got the cool heads in the fire pit? Because the atmosphere it going to be electric, absolutely electric.

‘I’ve played in north London derbies – you’ve got to be composed, you can’t make stupid mistakes, you can’t be a rabbit in the headlights, and the team who handles that best will win the game.

‘I think the pressure is going to mount on Arsenal. It’s a young squad of players and this is a massive game for them. We’ve got a bit more experience with Hugo Lloris, [Pierre-Emile] Hojbjerg, [Harry] Kane and [Eric] Dier. We’re better equipped to handle the pressure. It’s really evenly matched but with the players we’ve got, we’ve got enough to beat them. 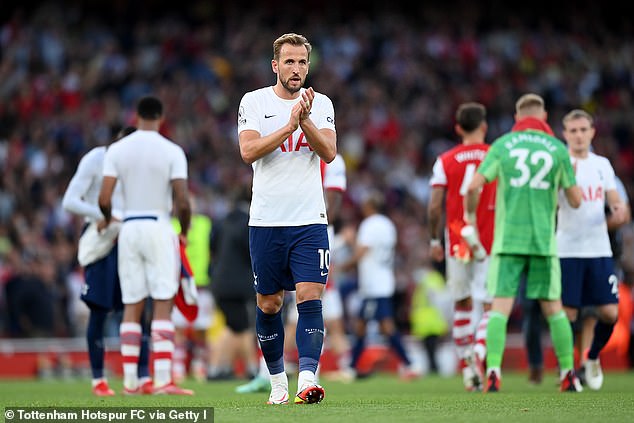 ‘They’ve got better full backs than us, we have a better forward line. The midfield is close and centre backs are close too. The difference we have, is we have Kane and Son – they don’t have that.’

With so much at stake, there is little margin for error and Spurs know a win would only pull them a point behind the Gunners – they then have to hope Mikel Arteta’s men slip up in their last two games against Newcastle and Everton.

But O’Hara – who played in three north London Derbies – thinks Arsenal will ‘fall apart’ in their remaining games if they lose to Tottenham, but warned his old team they cannot afford to produce a ‘flat’ display that has been the cause of their inconsistencies this season.

‘They’ll crumble. If we win, they’ll fall apart,’ he adds. ‘I’m telling you, they’ll lose another one or draw, and they’ll miss out. They’ve got Newcastle away – that’s no easy fixture – and Everton are fighting. We win this game, I think Arsenal will drop points. Our fixtures, we should go on and win them. 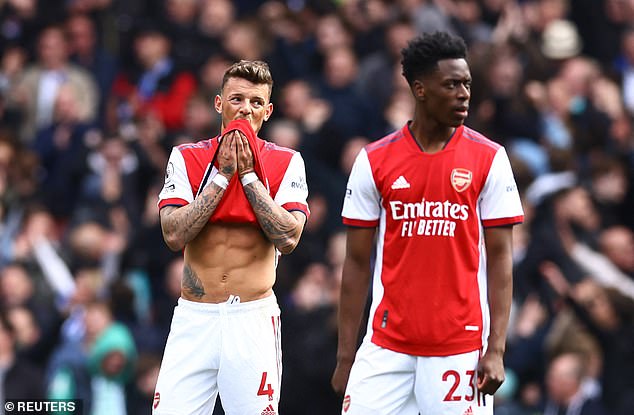 ‘If the right Tottenham turns up at home, we win this game comfortable – 2-0 or 3-0. You just don’t know what team turns up. With all this pressure we could go out and be flat as a pancake. When you look at Man City or Liverpool, they never drop below seven or eight out of 10. Tottenham have too many players who can be an eight, then the next week they can be a four. That’s why we’ve had a few stinking results.’

Arsenal haven’t finished above Tottenham for six years – since the 2015-16 season – and though Tottenham pulled ahead of their rivals in recent years, the gap is narrowing again. O’Hara feels if Arsenal clinch a top-four spot they could pull away from them and beat them to key signings too.

‘A Champions League spot is everything – in terms of finances, in terms of luring players, keeping your manager,’ he said.

‘My worry is this Arsenal team are at the start of a journey. If they get top four, that’s amazing season for them and they could kick on after this. Spurs maybe miss out on players if we don’t have that top-four spot.’ 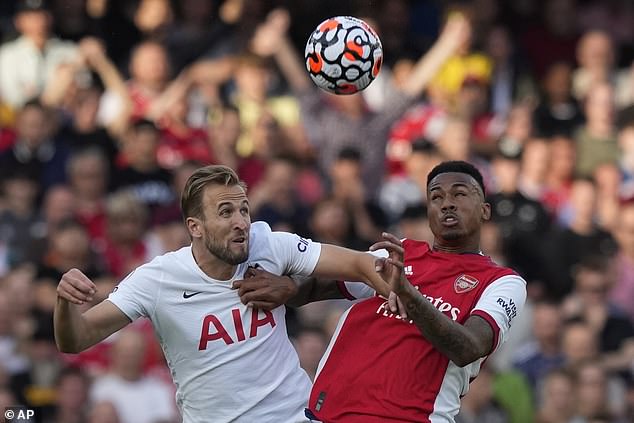 O’Hara cannot remember a bigger north London derby than this. He was on the bench when Spurs beat Arsenal 5-1 in the League Cup semi-finals in 2008 – but he believes this is a step above, and thinks Antonio Conte is the perfect manager to deliver a result.

‘There hasn’t been a moment like this. This is for the Champions League. This is the biggest north London derby in recent history. I think we’ve got the players and a big-game manager. He’s done it against Man City and Liverpool twice.

‘In the big moments, Conte is the best in the world. He’s built that belief into the players and I think they’ll go into this confident.’

O’Hara made his full Tottenham debut against Arsenal in a 2-1 loss in 2007 and recalls how the prospect of playing the game was so daunting it left him sleep-deprived.

‘It’s the most unbelievable game to be involved in,’ he goes on. ‘I remember never being able to sleep a wink the night before the game. I made my home debut against Arsenal and I had two hours’ kip.

‘We lost the game but I played really well and got man of the match. That’s just a game you want more of. I’ve played in a lot of derbies – the Black Country derby, the Southampton – Portsmouth derby, Fulham vs QPR, but the north London derby is the stand-out one. They’re games you want to be involved in – it was just special.’ 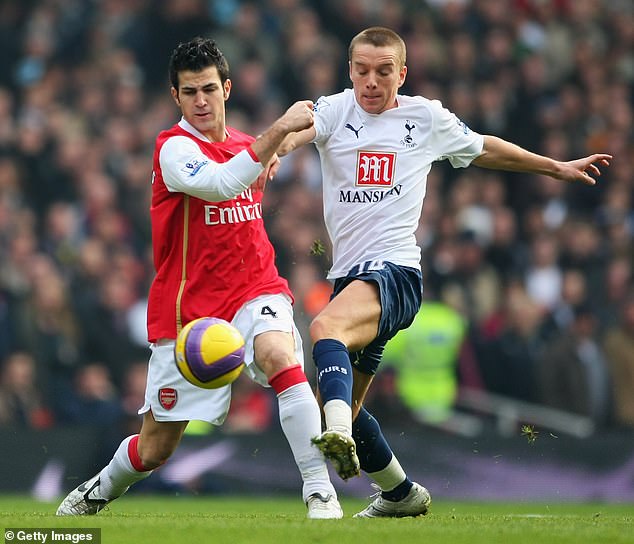 Now a talkSPORT pundit, O’Hara played in three derbies and admitted the prospect of playing in the games left him with sleepless nights

Now mostly seen as a pundit on talkSPORT, O’Hara will be fondly remembered by Spurs fans for his passionate displays, but they might not be too polite when they remember he started out in the Arsenal academy as a child.

O’Hara was still a big Spurs fan at the time – and had no intention of hiding it during training sessions – but has no regrets about playing for the Gunners, saying they had ‘the best academy in the world’ and hailed them for teaching him ‘everything I know about football’.

‘I was a massive Spurs fan at the time. I used to wear Spurs shirts down at the JVC Centre! I stopped wearing them because the coaches got the hump.

‘I have a bit of banter with Arsenal fans but the club were incredible for me as a young kid. They were the best academy in the world. They taught me everything I knew about football, they nurtured my ability, it was a great place – brilliant people, I had a great upbringing.’ 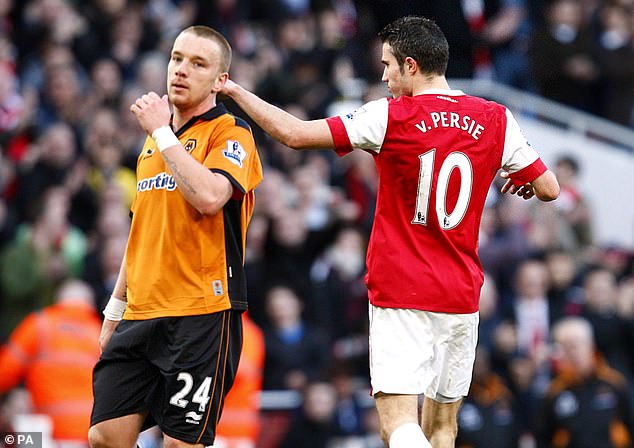 He started his career with Arsenal as a child but has no regrets about playing in their academy (he is pictured, left, playing against the Gunners for Wolves in 2011)

Contrary to rumours he was released by Arsenal, O’Hara insists it was the other way around – claiming they were ‘desperate’ to keep him on and slowly progress him to the first team, while O’Hara wanted a quicker transition.

‘I never got released – they were desperate for me to stay. I fell out with Liam Brady over progression going into the first team, which they believed I would be in. I needed to be pushed quicker.

‘It was maybe the wrong decision at the time, but it ended up being a great decision, because I got to play for Tottenham – my boyhood club. When they come around, it’s really hard to turn it down. I always visualised playing for Tottenham.’

His final message for Spurs going into Thursday’s game?

‘Don’t give them a second – not one second on the ball. The crowd will be behind you. That will give you an extra 15 per cent of energy.

‘Mistakes will be made, just make sure every first second and third ball is ours. Stay on top of the game. With Kane, Son and Kulusevski we will create chances. But we cannot afford to be flat.’

DAVID LLOYD: Joe Root is the missing link and England will bring him back for the T20 World Cup

RIATH AL-SAMARRAI: Tearful Kamila Valieva was buried by the weight of a global scandal