Christ Tshiunza was called up to the Wales squad for the Autumn Tests, on the same day he was playing for Exeter University in Topsham.

The Exeter Chiefs starlet, who was born in the Congolese capital Kinshasa but moved to Wales a kid, is a 19-year-old 6ft 6in 17st 6lbs second-row with a bright future.

On Wednesday he played against Cardiff University for Exeter University in the BUCS Super Rugby league, hours after being picked by Wayne Pivac in a 38-man Welsh squad alongside legend Alun Wyn Jones. 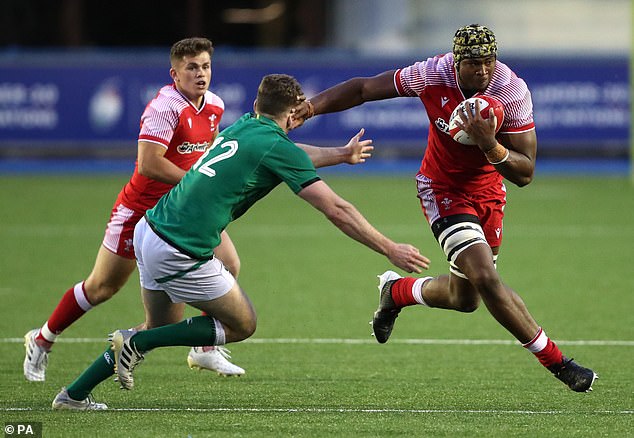 Uncapped Christ Tshiunza (right, in action for the U20s) has been called up to play for Wales

Tshiunza will not be able to feature for Wales against the All Blacks on October 30, like other English-based players Dan Biggar, Taulupe Faletau, Nick Tompkins, Callum Sheedy, Louis Rees-Zammit and Thomas Young – as the match is outside the international window – but could make his debut against the world champion South Africans the next week.

Wasps flanker Young is back in the Welsh squad despite the fact that he does not have 60-caps, Pivac allowed to break the rule that precludes those outside Wales playing for their country, as it was announced he would be signing for Cardiff to join his father Dai next season.

Pivac also calls up Gareth Anscombe and Ellis Jenkins who have both been out of the Test reckoning with horrendous knee injuries, Anscombe since 2019 and Jenkins 2018.

Wales are without Justin Tipuric, Dan Lydiate, George North, Leigh Halfpenny, Josh Navidi and James Botham, all injured, so have had to delve deep into their player pool.

This has been one of the most difficult selections I’ve had to make with less rugby than would have normally taken place ahead of a campaign in addition to injuries and player unavailability.

‘Injuries in certain positions, particularly at openside, have forced us to look a little bit deeper than we would normally but what it does mean is that more players have an opportunity to be exposed to this level of rugby,’ said Pivac.

‘This can only be a good thing as we continue our preparations for the 2023 World Cup.’

‘When you look at selection you want to select in-form players but it’s fair to say that a number of players haven’t hit their top form.

‘We have looked at past performances at this level, including a very successful Six Nations campaign, and we’ve cross-credit some of that information into current form if you like.

‘We understand that the opening game against the All Blacks is outside of the international window but I believe that we all need this game, after what has been a particularly difficult time for everyone because of the global pandemic.

‘It will be fantastic to play in front of a capacity crowd once again, with a number of these players getting to experience that for the first time.’

After the All Blacks match Wales have a gruelling autumn schedule – with South Africa, Fiji and the Australia.

*Unavailable for selection for New Zealand