Players donned bucket hats and wore sunglasses to hide tired eyes after they had partied at their hotel until 4am.

Leah Williamson admitted she was feeling ‘a bit rough’ but the England captain still managed to find poignant words to describe the significance of what winning this tournament will do for the women’s game. 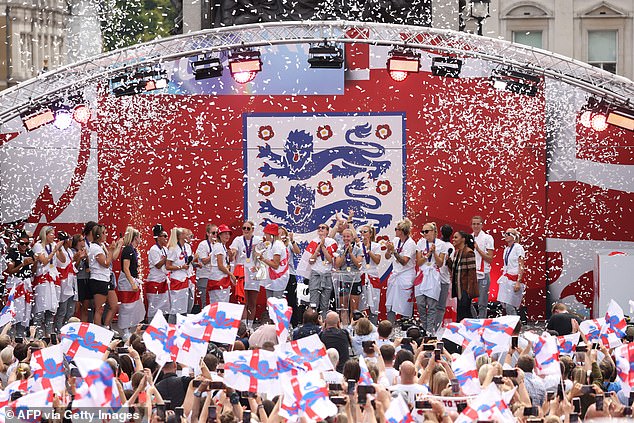 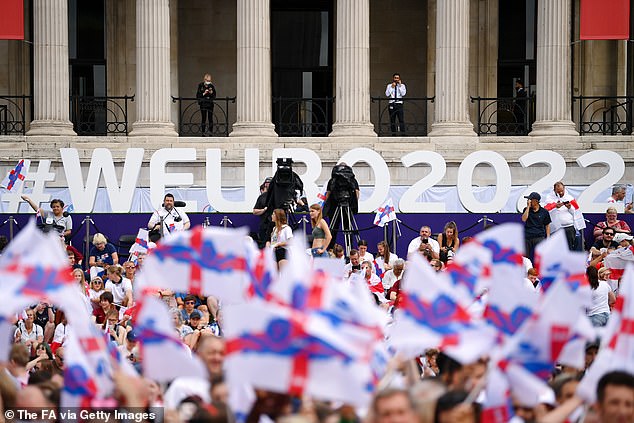 ‘The legacy of the tournament was already made before that final game, the young girls and the women who can aspire to be us,’ Williamson said. ‘We’ve changed the game, hopefully in this country and across the world.’

The Arsenal defender hailed boss Sarina Wiegman as the ‘missing ingredient’, revealing that the players had ‘partied more than they had played football’ in the last 24 hours.

Everyone was still on a high — none more so than Chloe Kelly, who joked her shirt was ‘staying on’ after she had taken it off in celebration in the wake of her match-winning goal.

‘I ain’t stopped dancing, my feet just keep going!’ Kelly said. ‘Everyone’s absolutely buzzing. We had a good night last night but some of us were a bit worse for wear this morning.’ 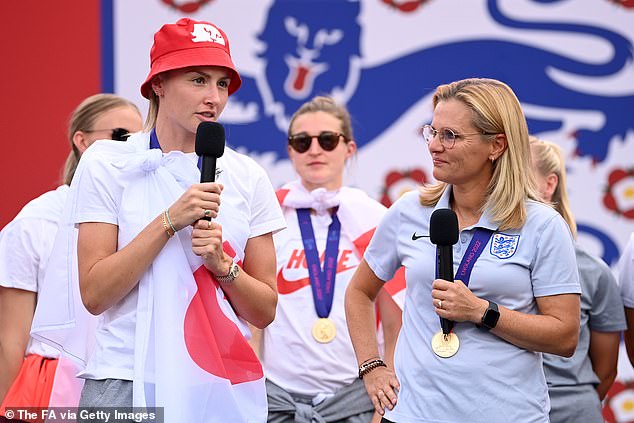 Ella Toone, the scorer of England’s first goal, was asked about a tweet from Harry Kane, who told her to ‘take a bow’ for her impressive chipped finish.

Toone joked: ‘Yeah, I taught him that (technique)! It took about 10 minutes to go into the net. Then I ran off, the stadium erupted and it was the best feeling in the world.

‘It’s been an unbelievable 24 hours and I’m sure the celebrations will continue. The whole bus back to the hotel was partying. Everyone was everywhere on tables, chairs, down the aisles.’

Golden boot and player of the tournament winner Beth Mead was one of the more emotional stars on stage. 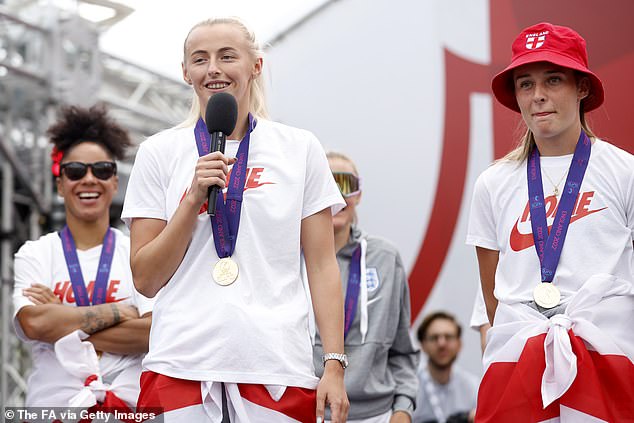 Mead was left out of the Team GB squad for the Tokyo Olympics last summer and had to fight her way back into the England team.

‘I am (getting emotional),’ she added. ‘I’m losing my voice as you can tell. Sometimes football sucks. I worked hard and I feel so lucky to be a part of this group, I’m just so happy to be here.’

But the biggest cheer of the day went to manager Wiegman, who was told to lift the trophy by BBC presenter Alex Scott.

‘It’s really heavy!’ Wiegman joked. But she then ran to the front of the stage and hoisted the trophy in the air. Lucy Bronze revealed she had tried to give Wiegman a beer in the morning meeting before the players headed to the centre of London.

‘The last message I sent on my phone was at 4am,’ Bronze said. ‘It didn’t make much sense. And then we all had to get up at 8.30am to have a meeting and come here. Sarina was finding it hard to keep up with the English ways. She had a few comments this morning!

‘I tried to give her a beer before she started the meeting and she was like, ‘Please don’t, Lucy’. We have been winding her up, but it’s something she’ll have to get used to now she’s an honorary Englishwoman. She’ll have to get practising (drinking beer). Hopefully we can have more nights like that, so she’s going to need it!’

England’s players were welcomed at their hotel by their friends and family with cake, pizza, alcohol and canapes. 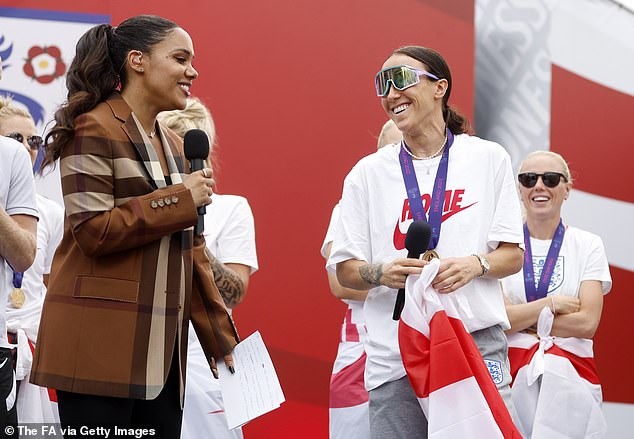 ‘My family have got two children under two (years old). I am not going to lie, my nephew did very well,’ Bronze added. ‘He kept up with everybody, he got on the dance floor a little bit until 2am.

‘He thought he had a medal on as he had a lanyard on with a picture of his aunty Lucy!’

The longest-serving member of the squad, Jill Scott, received a big ovation from the crowd. Scott, who made her debut in 2006, played a crucial part in the final by coming off the bench to help sure-up England’s midfield. ‘I’m just so honoured to play any little part in this team,’ she said.

‘Everyone who has put the shirt on, everybody that believed in women’s football… we just wanted to be ‘football’ and hopefully now that’s how it’s perceived around the world.’

When the players had finished their speeches, captain Williamson addressed the crowd: ‘We’ve got a little surprise for everyone, Rachel Daly is going to sing for you.’

Daly’s singing displays became a common sight after victories at the Euros and she took to the stage for a rendition of Tina Turner’s River Deep, Mountain High. She hit an impressive range of notes but was eventually drowned out by the backing music as the rest of the team danced behind her.

After all the sing-a-longs, presenter and former England player Scott brought the festivities to a close. ‘Hashtag who cares?’ she asked. ‘Millions care. Millions.

‘And like our England captain said, this tournament may be over but this is just the start of a magical journey.’ 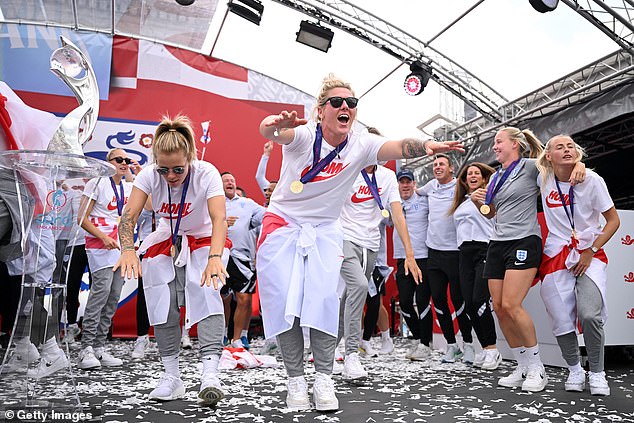 Face the truth: David Leafe reports on the courtroom paint-off between a husband and wife

Which Manchester United youngsters can hope for playing time at Old Trafford next season?