Newcastle’s new owners have only been in charge of the club for a matter of days but there is no doubt they will want to make a statement in just over two months’ time when the January transfer window opens.

With their new-found riches, the Magpies will be looking to invest heavily into a squad that has underperformed under their much-maligned manager Steve Bruce.

This wouldn’t be the first time that a club’s new owners have made such a statement in the Premier League as Sportsmail takes a look at the transfer activity of billionaire-backed Chelsea and Manchester City in their first window under such ownership. 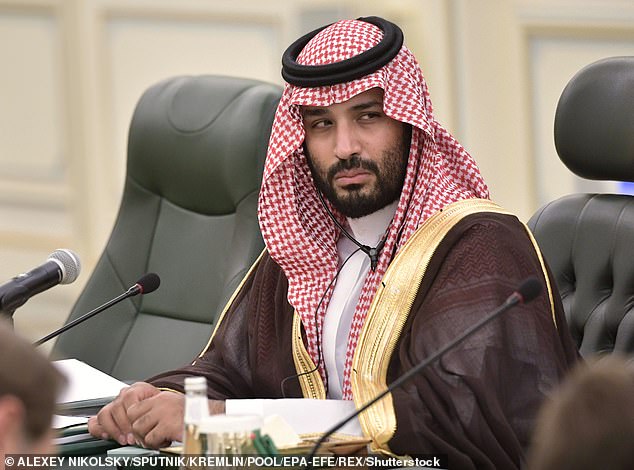 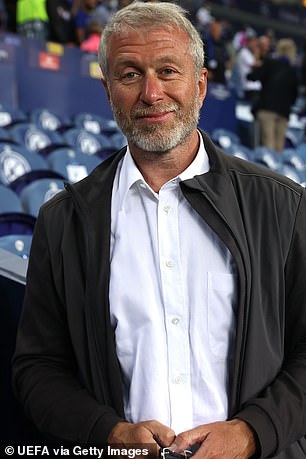 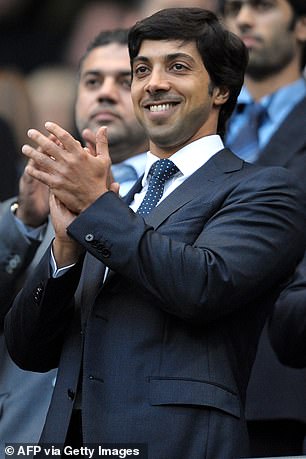 The arrival of Roman Abramovich changed the landscape completely within English football.

Chelsea went from finishing fourth in 2002-03, to second the following campaign as the Russian billionaire signed 13 (yes THIRTEEN) players for the club in his first window.

Signed on a free transfer from Sunderland, Jurgen Macho was the first signing of the Abramovich era (there’s a quiz question for you).

The Austrian goalkeeper was meant to provide Carlo Cudicini competition in goal but unfortunately tore his anterior cruciate ligament in his first week training with the club.

He didn’t play a single minute that campaign and was subsequently released in August 2004 as the Blues brought in an unknown Petr Cech. 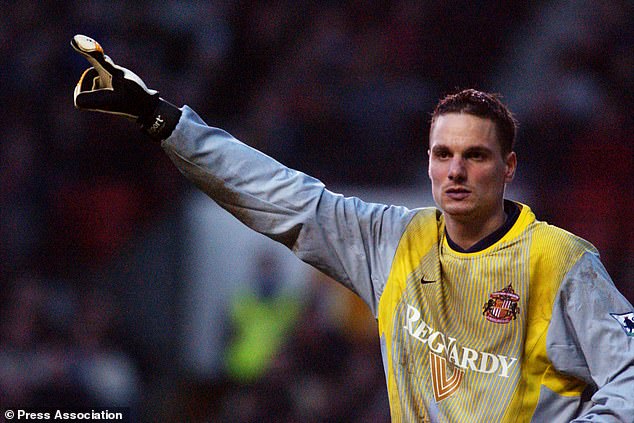 The second arrival at the Blues was also a goalkeeper and his spell also ended up going the same way as Macho.

Also suffering a knee injury soon after joining, Ambrosio made his debut for the club against Notts County in the League Cup. However, it was an error-strewn performance in a 4-2 win.

He was afforded a spell in the team later on in the season as Cudicini suffered an injury of his own. During that period it was Ambrosio who helped the Blues beat bitter rivals Arsenal in the Champions League quarter-final.

Overall he made eight appearances for the west London outfit before he too was allowed to leave in August 2004 due to the signing of Cech. 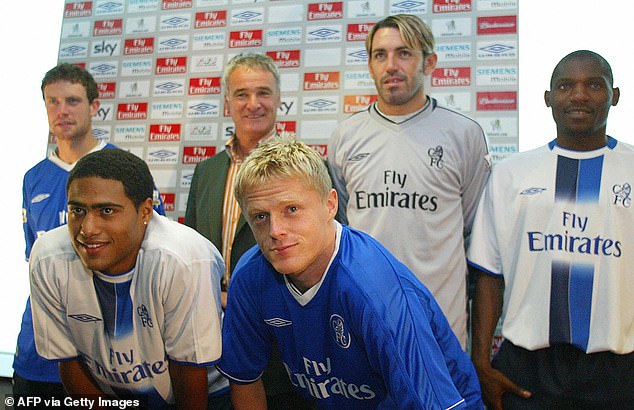 The first actual expenditure of the Abramovich era came at the cost of £6million for a teenage right back.

Following West Ham’s relegation in 2002-03, their bitter rivals Chelsea snapped up Glen Johnson. He made 32 appearances overall in his debut campaign and 28 in the next as the club were crowned champions of England for the first time in 50 years.

However, his third season saw him make just eight appearances in total as he fell out of favour under Jose Mourinho. He subsequently joined Portsmouth on loan in 2006-07 – a deal that then later on became permanent. 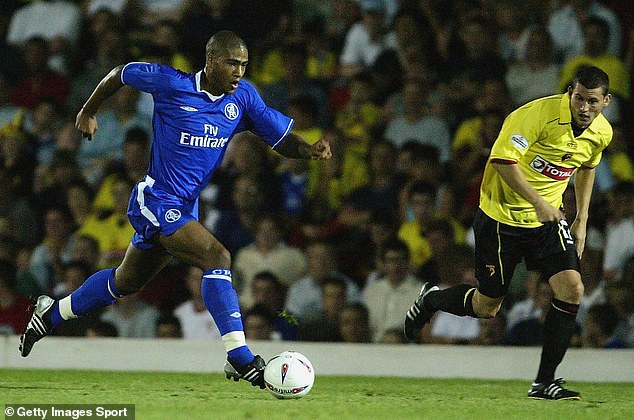 The first true statement signing from the Blues was the £7m acquisition of Geremi from Spanish giants Real Madrid.

Having spent the 2002-03 campaign with Middlesbrough, the Cameroonian was accustomed to the rigours of Premier League football and that showed instantly at Chelsea – making 39 appearances in all competitions.

Jose Mourinho’s arrival in 2004 saw his game-time diminish but his four-year spell there ended with two Premier League titles. 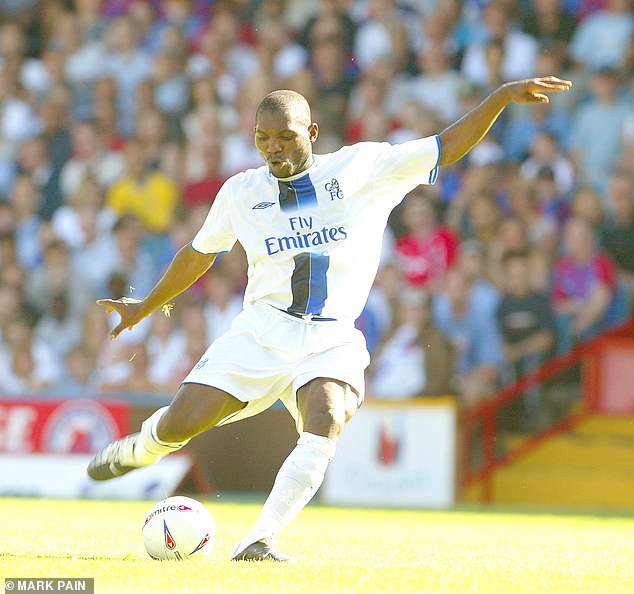 Chelsea signed three emerging English talents that window and the second of them to join was Wayne Bridge.

The left back, 22-year-old at the time, arrived in a £7m deal from Southampton that saw then-34-year-old Graeme Le Saux head in the opposite direction.

Bridge’s first campaign was hallmarked by that winner against Arsenal in the Champions League quarter-final at Highbury.

Overall he made 142 appearances for the club over five-and-a-half seasons, winning the Premier League, the FA Cup and League Cup. 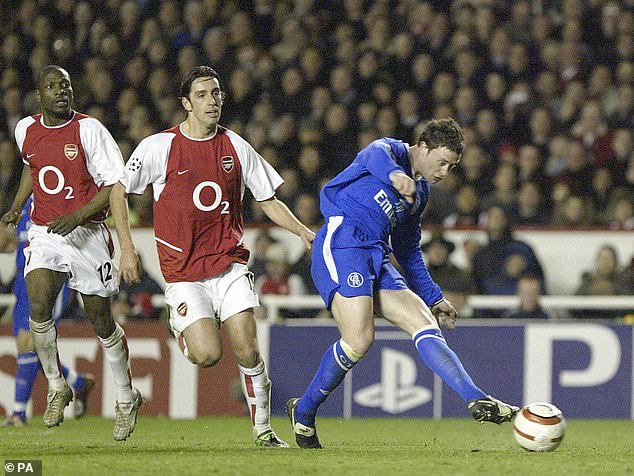 Featuring 37 times in his debut campaign, the Republic of Ireland international dazzled with his wing play.

He made 48 appearances the following campaign and 40 the next as he formed a devastating wing partnership with Arjen Robben.

Duff swapped west London for Newcastle in the summer of 2006, having won two Premier League titles and the League Cup. 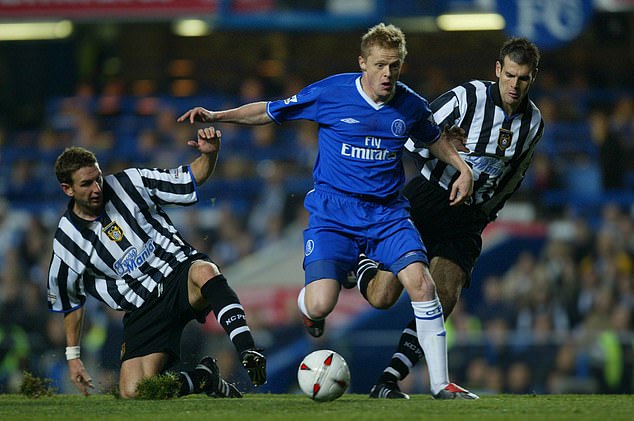 The third and final English signing of a crazy summer 2003 for Chelsea was Joe Cole. Like Johnson, Cole arrived from relegated West Ham and was earmarked to provide the creativity lost following the departure of club legend Gianfranco Zola.

He went on to make 50 appearances for the Blues in his debut campaign and was a key first-team contributor throughout his seven years at the club. 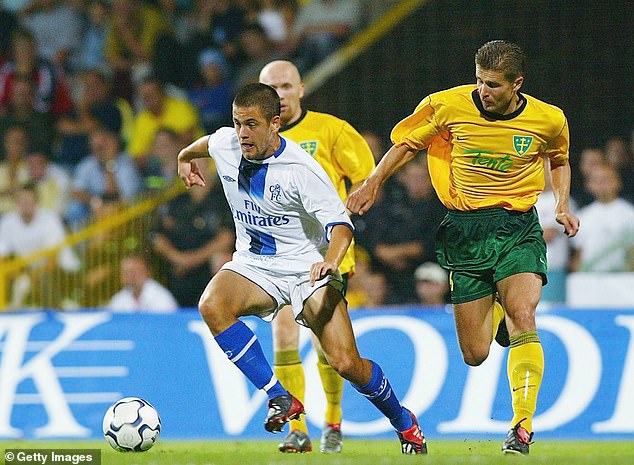 Not all of Chelsea’s big summer signings were a success and that certainly applies to Juan Sebastian Veron.

Having underwhelmed at Manchester United, the Argentine playmaker joined the Blues in a £15m deal.

It was hoped he would be reinvigorated in west London but that didn’t prove to be the case as injuries blighted his one full season at Stamford Bridge.

He made just seven Premier League appearances for Chelsea before a two-year loan spell at Inter Milan was followed by a move to boyhood club Estudiantes. 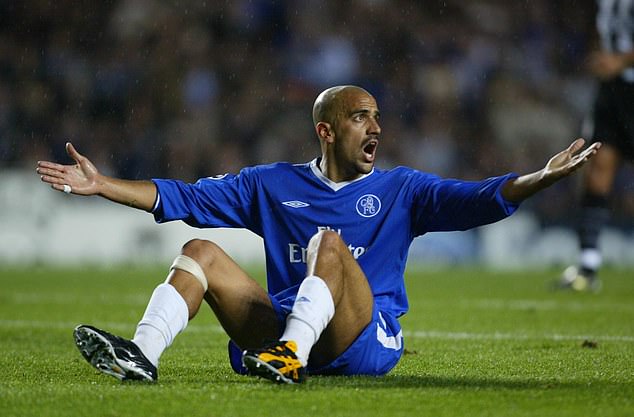 Another signing who is considered a flop among the Chelsea faithful, Adrian Mutu started his career in west London on fire – scoring four goals in his opening three games.

His debut campaign ended with 10 goals in 38 appearances but his career turned upside down in September 2004. He tested positive for cocaine that month and was sacked by Chelsea in October 2004, shortly before the Football Association gave him a seventh-month ban.

Despite being banned until May 2005, Mutu joined Livorno on a free transfer in January that year before he was quickly sold to Juventus once they could offload one of their non-EU players.

However, after a protracted legal battle, Mutu was ordered in October 2018 to pay Chelsea £15.2m in compensation by the European Court of Human Rights. 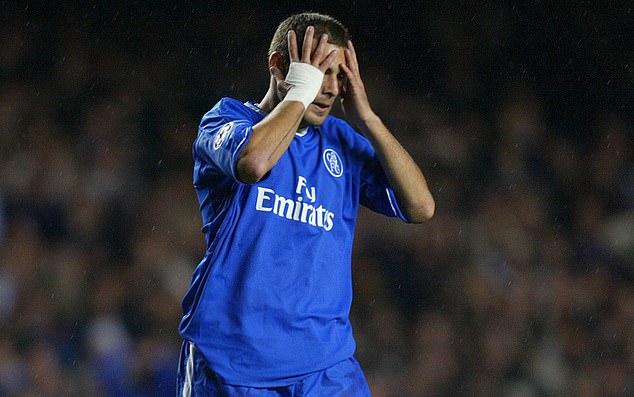 Despite signing for Chelsea in August 2003, Alexey Smertin was immediately sent on a season-long loan to Portsmouth.

He finally made his debut for his parent club during the 2004-05 season but only played a bit-part role in the team as Frank Lampard, Claude Makelele, Geremi and Tiago Mendes were all preferred ahead of him.

That was his only term representing the club as he was sent on loan to Charlton for 2005-06 before then being sold to Dynamo Moscow in March 2006. 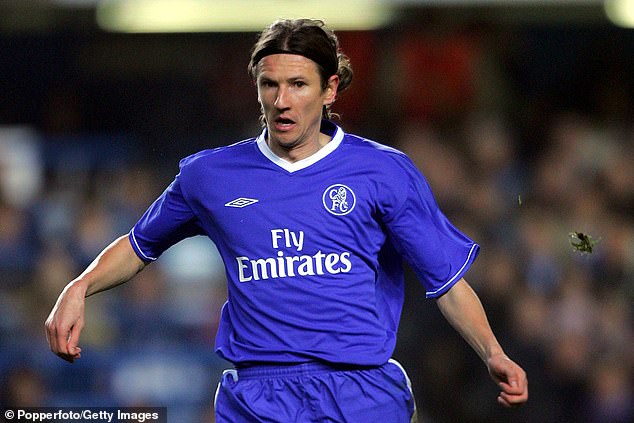 Despite a respectable goalscoring record in England, 25 goals in 73 games, Crespo’s spell at Chelsea was a curious one.

His 2003-04 season yielded 12 goals in 31 appearances but he spent the following campaign on loan at AC Milan after the arrival of Didier Drogba.

However, he was back at the Blues in 2005-06 – helping the club win the Premier League title – before then being sent back on loan in Italy, this time to Inter Milan in 2006-07. 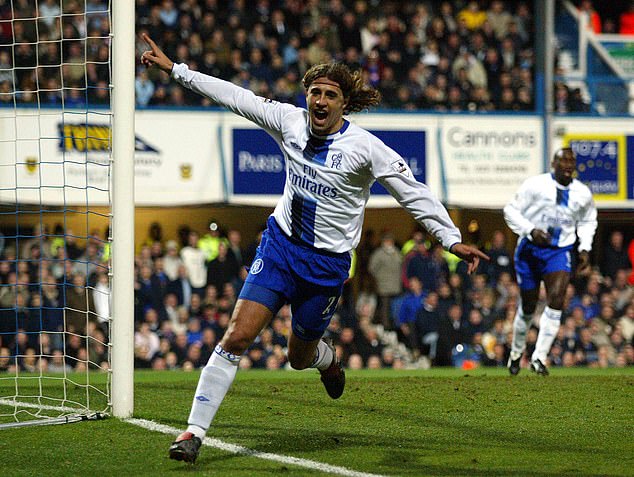 Following injuries to Macho and Ambrosio, Chelsea were desperate for goalkeeping cover and plumped for then-33-year-old Neil Sullivan.

As Chelsea’s injury-crisis deepened, with Cudicini going down too, Sullivan played eight times for the club in his sole season there before he was signed by Leeds United in 2004. 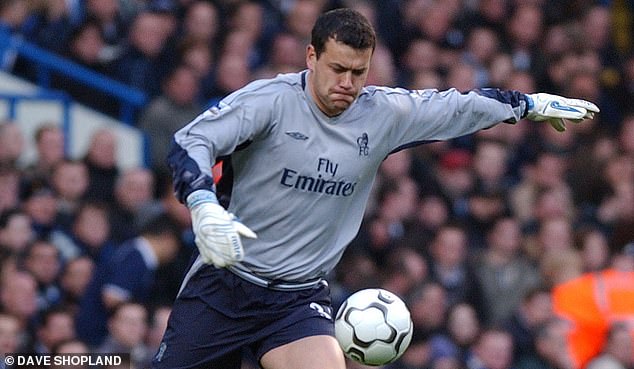 The No 13 is synonymous with being unlucky but that certainly wasn’t the case with Claude Makelele.

Out of all the Chelsea acquisitions, undoubtedly the Frenchman had the biggest impact at the club.

A holding midfielder so good his position became defined as the ‘Makelele role’.

Five seasons at Stamford Bridge brought two league titles, one FA Cup and two League Cups – but the beloved Frenchman brought a lot more than silverware to the club. A definite Chelsea legend. 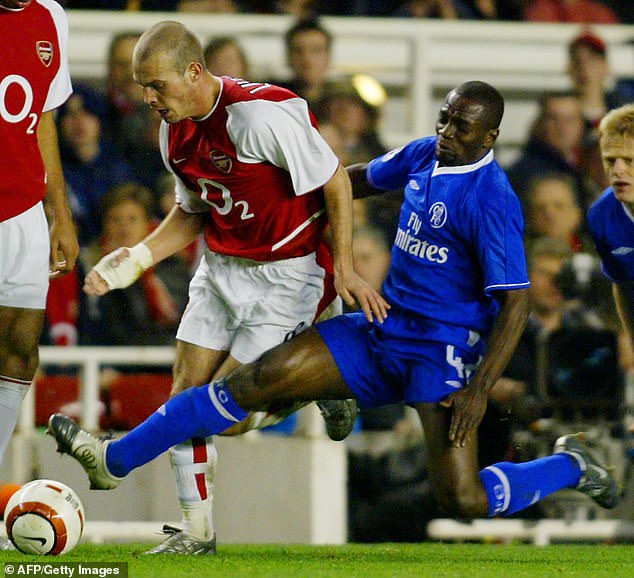 Bridge features twice on this list with the left back leaving Chelsea for City in January 2009.

He made 22 appearances during the latter part of that season as he established himself as the club’s first-choice left back.

The following campaign saw him feature 28 times, but by the start of the 2010 term his role became bit-part as Manchester City manager Roberto Mancini signed Aleksandar Kolarov from Lazio and then Gael Clichy from Arsenal a year later.

Deemed surplus to requirements, Bridge spent loan spells at West Ham, Sunderland and Brighton before signing a one-year deal at Reading and retiring at the end of that 2013-14 term. 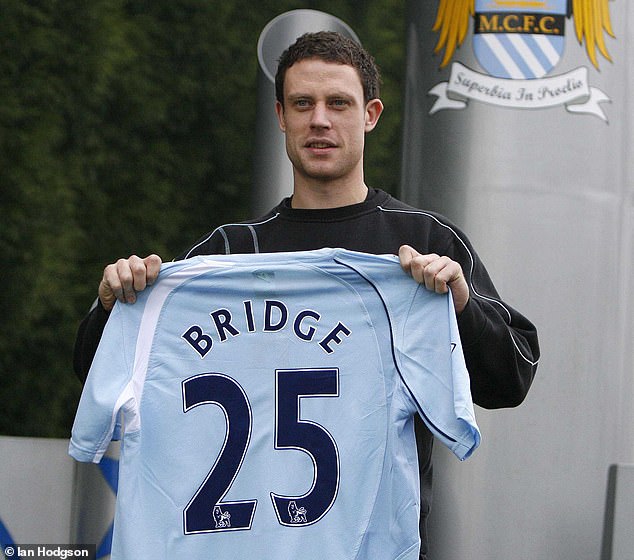 Signed to provide some extra attacking impetus, Craig Bellamy did just that by scoring the matchwinning goal against Newcastle United on his debut – a 2-1 victory.

However, he was soon struck down by injury which curtailed his first few months at the club.

His sole full-season at City saw him play a key role under Mark Hughes and Mancini, scoring 11 times in 40 appearances. But constant arguments with Mancini saw him deemed surplus to requirements in the off-season and he joined Cardiff City on loan for the 2010-11 campaign before signing for Liverpool 12 months later. 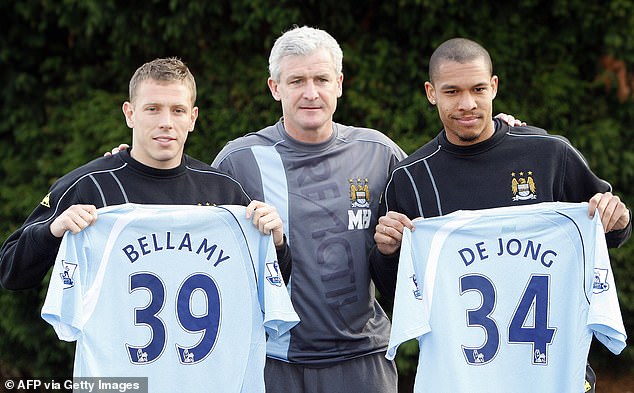 Bought to bring bite in the City midfield, Dutch enforcer Nigel de Jong was instantly inserted into the first-team.

He made 16 appearances in those four months of 2008-09 as City finished 10th in the Premier League. 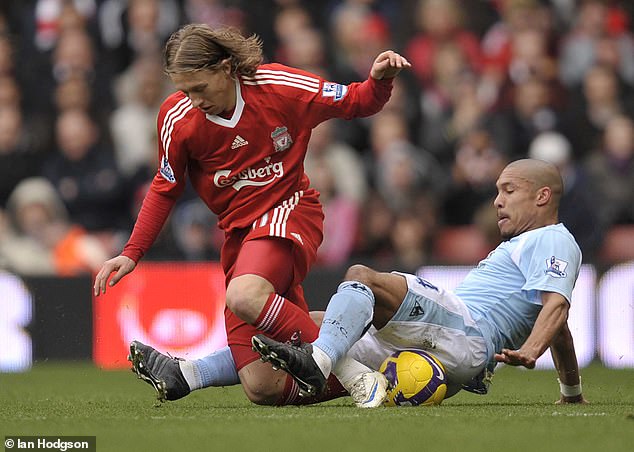 The final signing of the 2009 winter window for City saw the arrival of Shay Given from Newcastle United.

The Republic of Ireland goalkeeper kept a clean sheet on his debut in a man-of-the-match performance as City beat Middlesbrough 1-0. He made 21 appearances that term.

With the emerging Joe Hart on a season-long loan at Birmingham, Given was the established first-choice stopper at the club during 2009-10 – making 44 appearances.

However, that is how good as it got for Given. Mancini plumped for Hart to be his No 1 goalkeeper at the start of 2010-11 and after a term of playing second fiddle, Given joined Aston Villa in the summer of 2011. 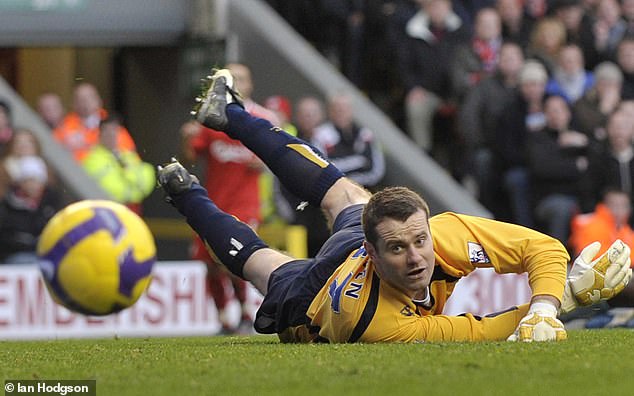 Pregnant Miami teacher, 41, is arrested for having affair with male student, 15

‘We’ll get Jofra Archer back to his best’: Ashley Giles vows to get the bowler fit and firing